iOS gamers that are into brawlers may have heard of Reliance Entertainment, makers Real Steel World Robot Boxing (Free) (among a variety of movie tie-in games). Well, the developers are back with Ultimate Robot Fighting (Free), another robot brawler that focuses on the likes of recent free-to-play brawlers such as Injustice and Marvel Contest of Champions. Lacking the star power of those two games, Ultimate Robot Fighting is forced to rely solely on its gameplay and freemium elements. Unfortunately, lackluster controls and simplistic gameplay make this game a bit hard to recommend.

Essentially an Injustice clone, Ultimate Robot Fighting is a game about collecting, upgrading and battling robots. Battling opponents earn experience (which is goes towards your card’s individual levels) and Digipoints, which is the standard currency for URF. Digitpoints are used for two primary purposes: purchasing robots via individual robot cards or packs and upgrading robots via rank-ups or by purchasing power cards. As you might imagine from a free-to-play game, Digipoints are earned consistently but at an incredibly slow pace. Gold, meanwhile, acts as the premium currency and is hardly earned at all. I was also turned off by the nagging to purchase power-up cards prior to matches (which basically translates to buying premium currency during early matches). 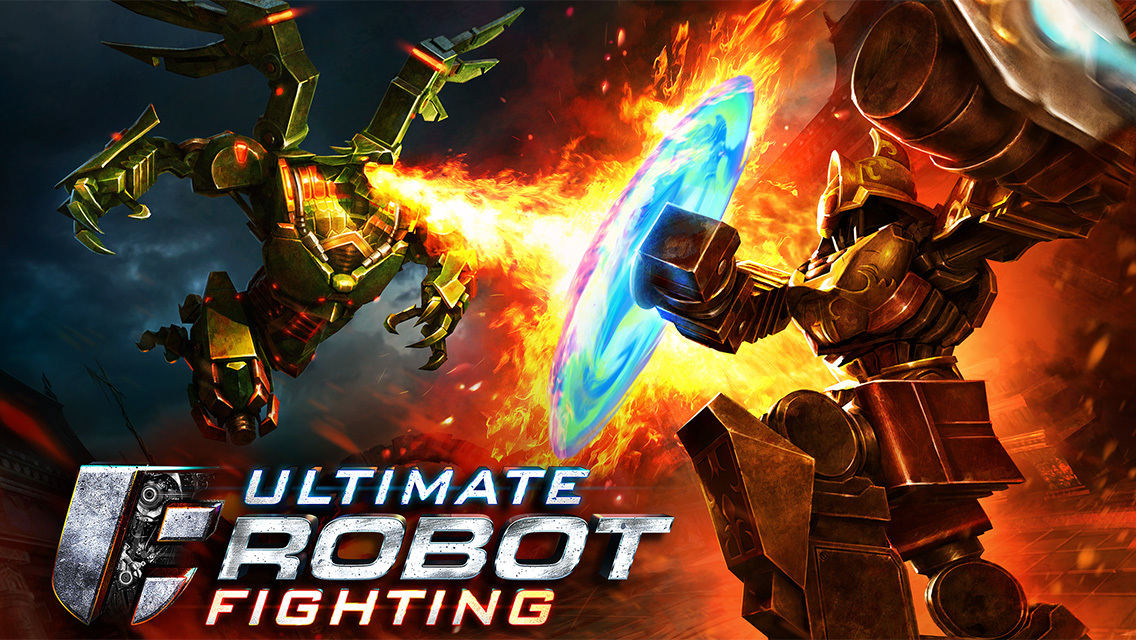 Gameplay-wise, I was not impressed with Ultimate Robot Fighting. Matches are played out via 3v3 tag combat. The combat itself consists of executing two types of combos (light and heavy attacks), launching super moves when the meter is filled, and blocking. There’s very little in terms of strategy other than simple block/counters and making sure you launch special attacks as soon as they’re available. There’s also a great deal of input lag as I found myself incessantly tapping on special moves trying to get them to activate and getting frustrated with blocks not being executed in time prior to an opponent attack. I’m not sure if the timing is supposed to be part of the gameplay or if it actual input lag, but either way it doesn’t make for a good gameplay experience.

That’s not to say there aren’t good points to Ultimate Robot Fighting. There are a lot of robots to collect, satisfying the needs of even the most hardcore of collection enthusiasts. In addition, the robots themselves are interesting and have some pretty impressive animations (the backdrops themselves aren’t half bad either. In addition, battle energy (this is a freemium battler, after all) is tied to the energy of your robots and not an overall system, meaning you could just switch out teams to keep playing rather than having an overall energy system that eventually forces you to stop playing. I also thought URF did a great job of offering a plethora of options to improve your robots. For example, Synergy rewards players that put certain robots together on a team, which can be important in later portions of the campaign where the difficulty ramps up. 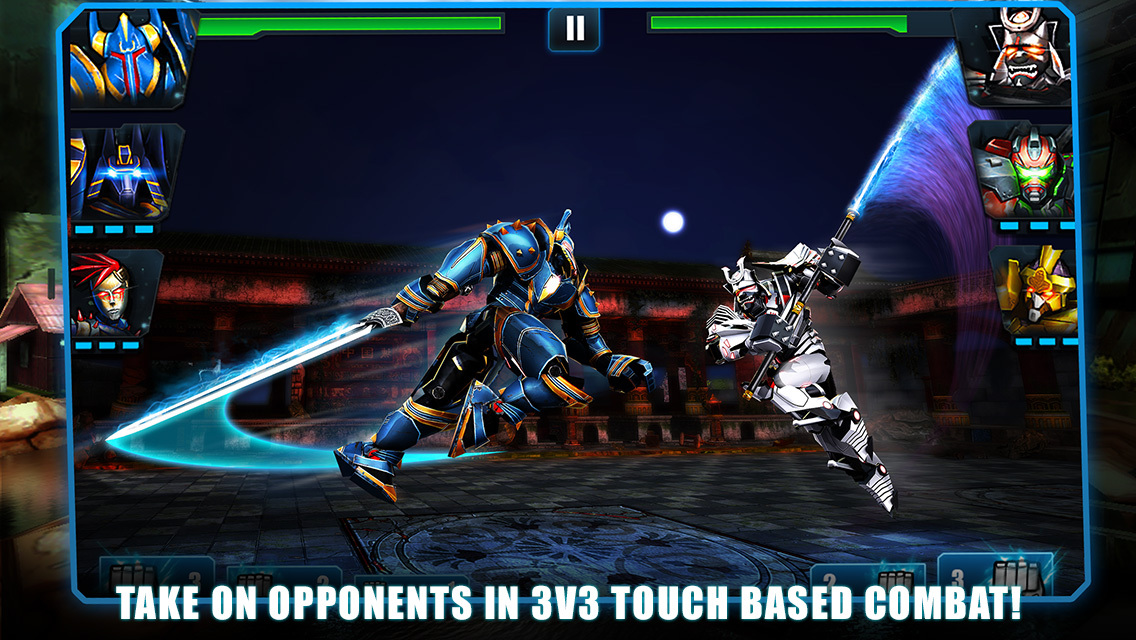 I don’t believe the above issues are solely apply to Ultimate Robot Fighting; most of the freemium concerns could be said about any free-to-play brawler. However, while Injustice and the recently released Marvel Contest of Champions have a wealth of IP to rely upon, URF doesn’t have that fallback. Sure, as mentioned earlier the robots are pretty neat but there’s nothing there for players to get attached to and become invested in. For example, I personally would be a lot more invested in the collection aspect of URF if the robots were Transformers or some other recognizable characters that actually have a backstory and a connection to the players.

This connection aspect can’t be understated because I believe that’s what makes these types of games so compelling. It’s cool to have a collection of DC or Marvel superheroes in your stash to play with. Similarly, it would have been cool if Ultimate Robot Fighting featured Transformers or even the GoBots (they are the K-Mart Transformers after all) as robots you can collect, upgrade and battle with. Without that, you’re left with whatever lore the developers have managed to put in that game, without anything else to draw upon. You’re also left with a distinct lack of motivation to buy into the game’s extensive freemium system, as it’s a lot harder to convince the common gamer to pay money for a character that they don’t know. It may not sound fair, but that lack of popular, ubiquitous characters in Ultimate Robot Fighting puts its issues into a clearer light. 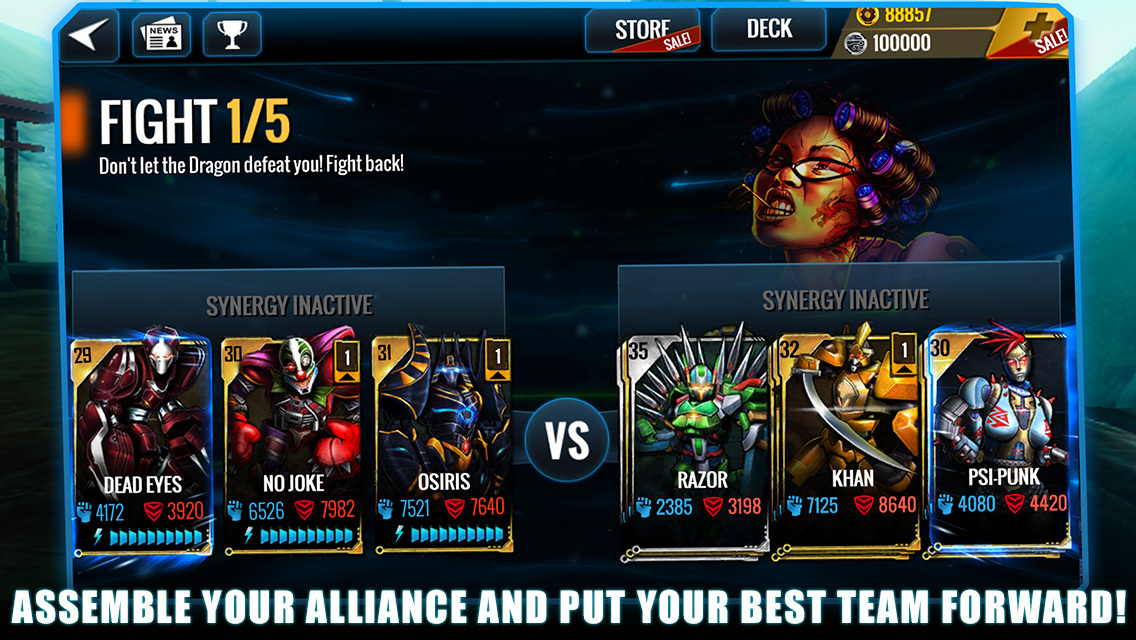 Seeing as how it’s a free-to-play title, there’s nothing stopping you from at least checking out Ultimate Robot Fighting. However, I think at this point there are better, similar titles out there to invest your time in. The lack of brawler variety, combined with the shortfalls in controls simply outweigh the potential merits of robot collection and power-up exploration.