The sports genre of video games is an interesting animal. It was probably the first genre to seriously concern itself with authenticity, both in terms of the recreating the play mechanics of the real game and acquiring real licenses. One of the first times I heard a licensed song in a game was in one of EA Sports’s titles, and the only reason I ever learned who people like John Madden and Jack Nicklaus were was because of video games bearing their names. It took a little while for that to catch on properly with the sport of hockey, with the first licensed products hitting in 1991. Even then, publishers had trouble deciding if they wanted the NHL license, the NHLPA license, or both. After that genie was let out of the bottle, it never went back in, at least until mobiles came around. While you would see the odd unlicensed football or basketball game, hockey games virtually always carried a license of some sort.

Fans of the NHL already have their iOS bases covered with NHL 2K ($2.99), but one way the App Store has proven to be different from the traditional market is that the audience actually seems receptive to sports games that aren’t licensed by the professional leagues. That’s a quality that Djinnworks has been able to capitalize on with its various Stickman sports games, a series of low-cost, casual sports titles that have enjoyed a pretty good reception from iOS gamers. I’m not sure why they went for ice hockey for their next title over other more popular sports, but I’m sure not going to complain about another hockey game. Stickman Ice Hockey (Free) brings the developer’s usual mentality to the greatest sport, and it proves to be a natural combination that most hockey fans should find some value in. 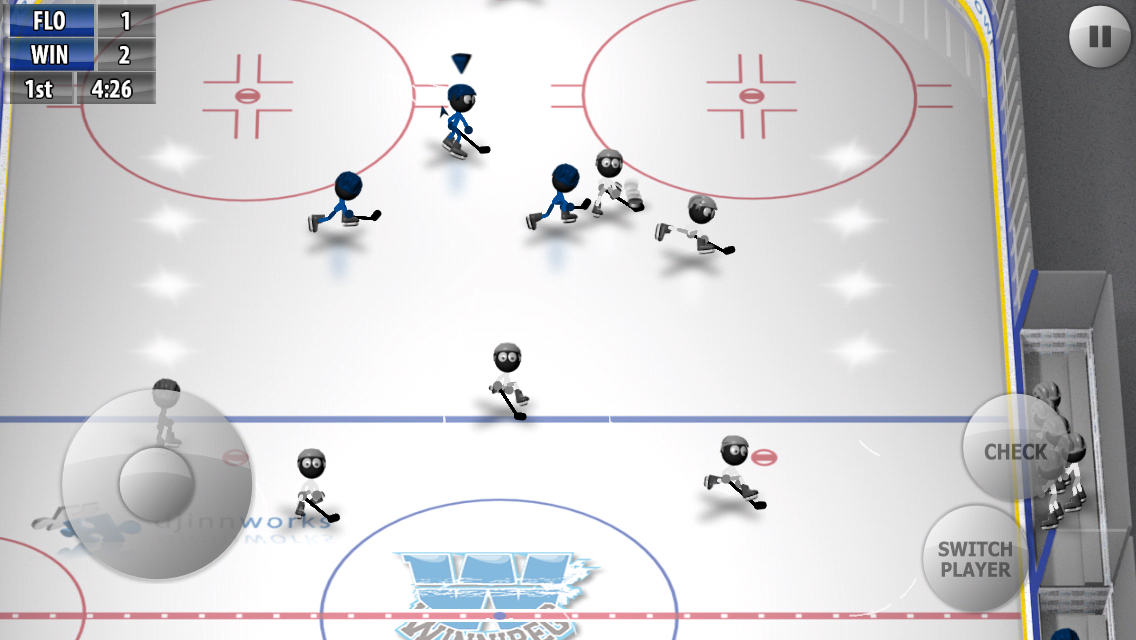 Stickman Ice Hockey is set up in what is now the traditional format for hockey games, aligning the rink vertically with the nets at the top and bottom. This style was popularized by EA Sports’s NHL series that started back in the 16-bit days, and that’s essentially what the gameplay shoots for here. You’ve got a virtual stick to move around your active player and two buttons that do different things depending on whether you have the puck or not. If you’re holding the puck, you can pass, fire a quick wristshot, wind up for a slapshot, or pull off a one-timer by pressing the shoot button immediately after passing. Without the puck, the pass button switches players to whoever’s closest to the puck, and the shoot button becomes an all-purpose checking button. There’s not a lot of nuance in terms of what kind of check you’ll do, but there’s something to be said for keeping things simple with virtual buttons.

All of the NHL teams are represented here with appropriate stats, though they’re only identified by their city’s name for obvious reasons. You also get a bunch of national teams, too, which is something I missed in NHL 2K. Players, on the other hand, are all generic stick figures, which I would hope you might have expected. There are several gameplay modes to choose from, including a quick game, seasons of varying lengths, playoffs, and an open air classic game. You’ll have to unlock a couple of the modes by winning in various others, so you can’t, for example, jump into a season without first winning one quick game. There aren’t a lot of options to play with, but you can turn off offsides and icing, change the difficulty level of the computer AI, and adjust the length of the periods. There are no penalties in any mode, so you can get as rough as you like. There are also no trades, injuries, line changes, or anything that would indicate individual players. This is more or less straight-up hockey for the sake of it. 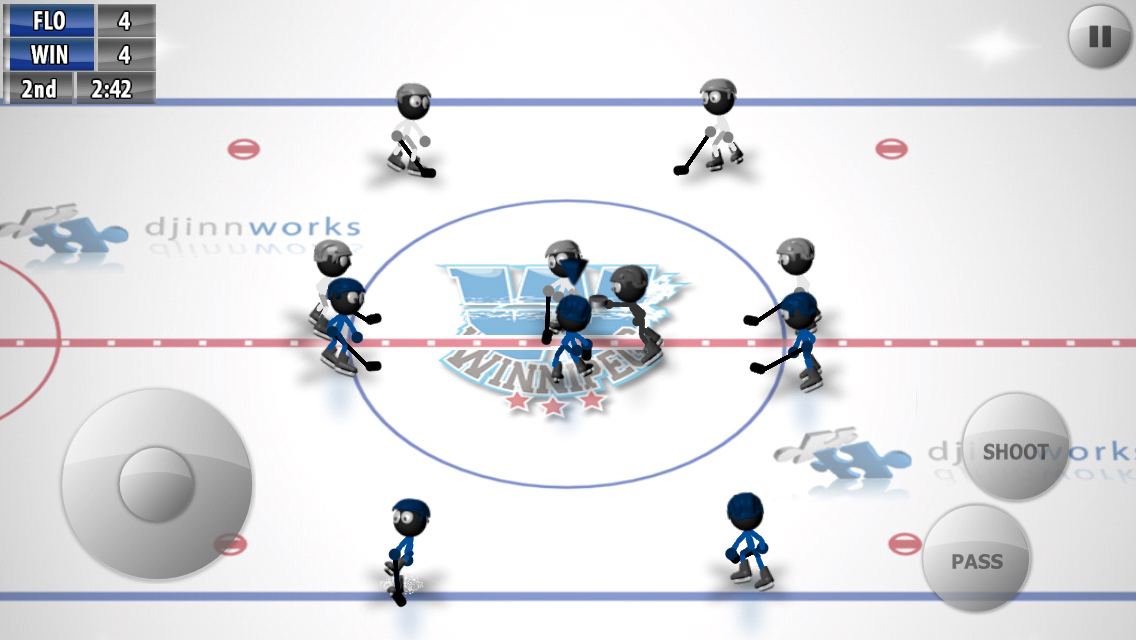 With that in mind, I do have some problems with the actual play. The biggest problem is that the goalies are sieves. It’s incredibly easy to beat them, even on the hardest difficulty, so any reasonably long game’s final score is going to resemble football more than hockey. That’s even setting aside the fact that there are certain positions you can shoot from that will guarantee a goal every time. Another problem comes from the Stickman style itself. The Stickmen are solid black figures, and though they wear colored jerseys, the part of their heads visible under the helmet is still the same color as the puck, and of a similar shape. I’m pretty good at following pucks, as I used to play net myself back when my knees didn’t make grotesque popping sounds, and even I had trouble spotting the puck sometimes here. It makes for a rough combo when taken with the weak goalies, especially on higher difficulties. If you lose the puck for a second, there’s a good chance the opposing team just scored.

Apart from that likely unforeseen outcome, the presentation is serviceable. The characters are well-animated, the UI is well-designed, and the sounds and music are all decent enough. For music, you just get a bit of generic arena rock here and there, but I can understand that. Licensing Bryan Adams is cost-prohibitive and may warp children’s fragile minds, after all. The game supports MFi controllers, though I didn’t find the game really benefited much from using one, as the touch controls work quite well. There’s Game Center support for leaderboards and a pretty dull list of achievements. Disappointingly, the game apparently has ads that you can remove by “going Pro" for an additional $1.99. That also unlocks a special playoff mode that is otherwise only accessible by liking the developer on Facebook. I say ‘apparently’ because in the course of playing this game for review, I didn’t see even one ad, but that might be down to my region. It feels a bit odd for a paid game to have this kind of set-up, but I guess that’s the nature of the beast these days. 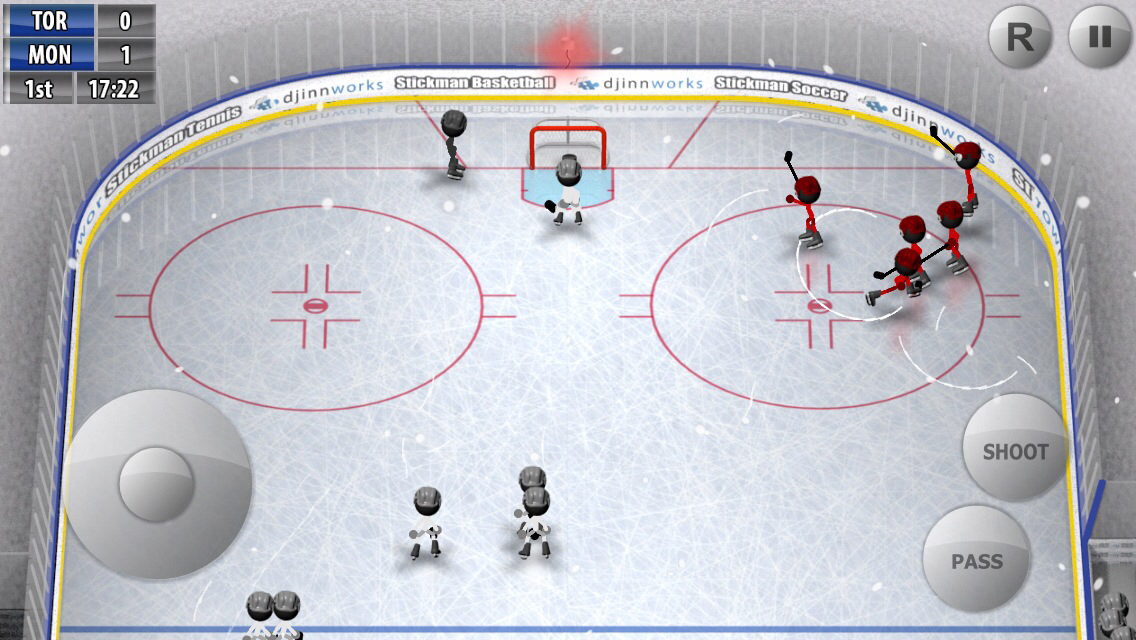 The bottom line is that if you’re looking to just play some hockey on your iOS device, and you don’t mind sacrificing gameplay depth and professional licenses, Stickman Ice Hockey will serve your purposes just fine. It reminds me of the type of hockey games we’d see on the NES, where it’s less a simulation and more a vague approximation of the sport. It’s a very basic take on things that doesn’t strive to do anything more than give you a fun take on the game itself. For its meager price, though, I’m not sure it has to be much more than that.