Certainly, tower defense is a genre where it’s difficult to really rock the boat too much, especially since the genre’s evolution was accelerated by the fact that it was a great fit for mobile, and everyone and their mother decided to apply their take on the genre. But hey, the games are still pretty fun, and there’s still the occasional title with a clever twist on the proceedings. Crystal Siege (Free) from Carrot Games and FDG Entertainment tries to apply an action-RPG take on tower defense, without drifting too much into the action-RPG side of things, like Dungeon Defenders ($2.99) does. As such, this winds up being a take on the genre that does some great things for itself while not rocking the boat too much. 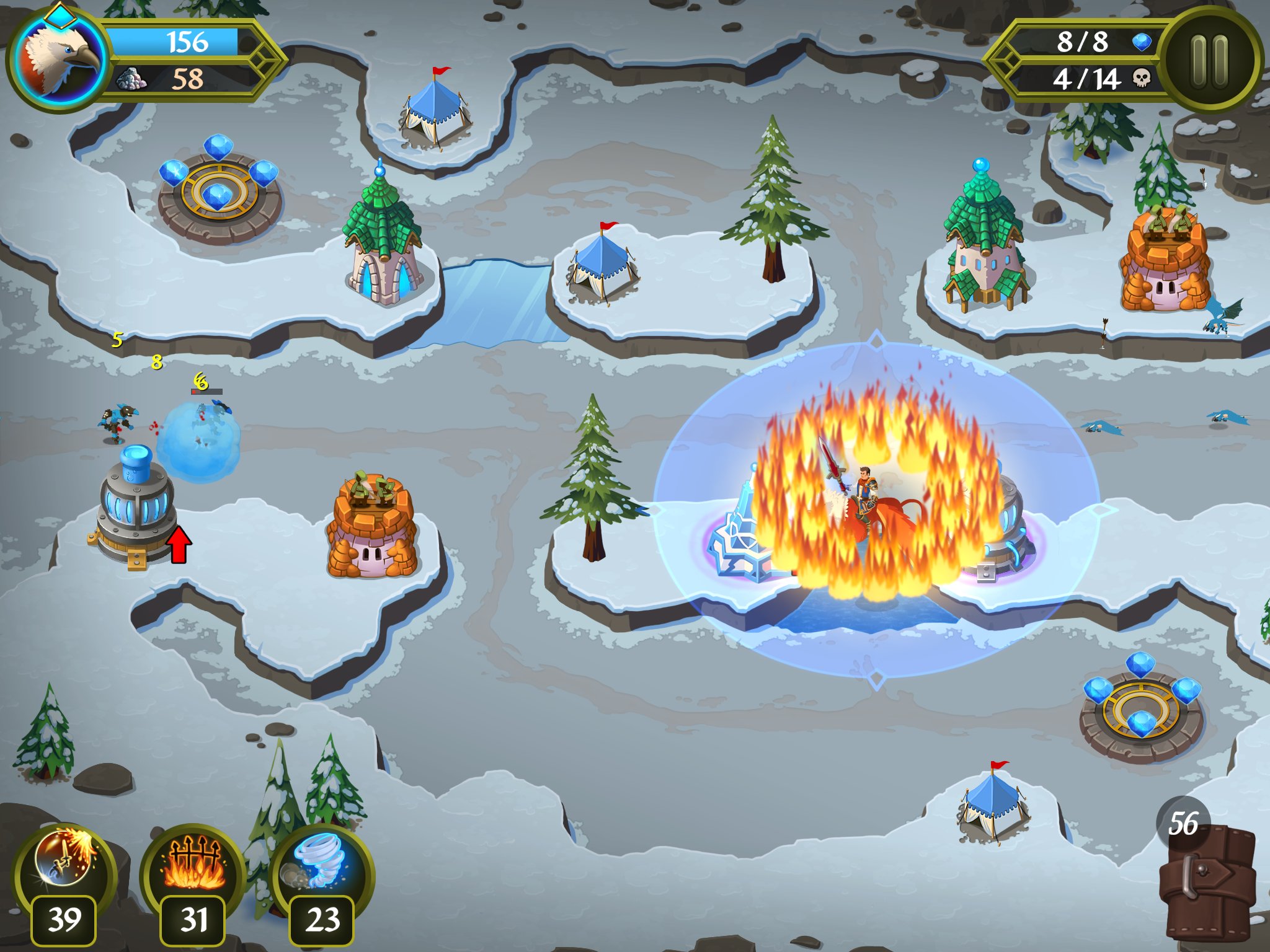 The game’s core tower defense is nothing too shocking: place towers at specific spots, and as creeps come in range of them, they take damage. The towers can all be upgraded, and towers feature split upgrades at their third level with different effects. As well, different enhancements can be bought for them in-game. But it’s the hero (sadly with only a male character option) who applies this game’s unique flourish. The hero can fly around the battlefield, and use the mana that’s charged up to unleash powerful magic spells that can attack enemies, trap them, or protect the crystals that the enemies are trying to steal. This mana charges up over time, but it’s also possible to go into combat mode to attack enemies directly, though this all but stops mana generation, so it’s best as a last resort. Players can buy items with the gold they earn for victory to buy weapons, armor, and rings, that can affect attack stats, magic and mana effectiveness, and provide benefits when in range of towers.

There are not a lot of levels in Crystal Siege, really only about 15, but each level takes about 9-10 minutes to beat. That time is fixed, too, as there is no fast-forwarding, which seems like an odd omission given that it’s a feature standard to the genre, and because the levels feel so lengthy, the game could occasionally use a turbo boost. There’s no ability to just freeze the action, either, so tower upgrading has to be done in the heat of battle. Considering that there’s also a character to control in the middle of battle, a little chance to strategize would be welcome, too. 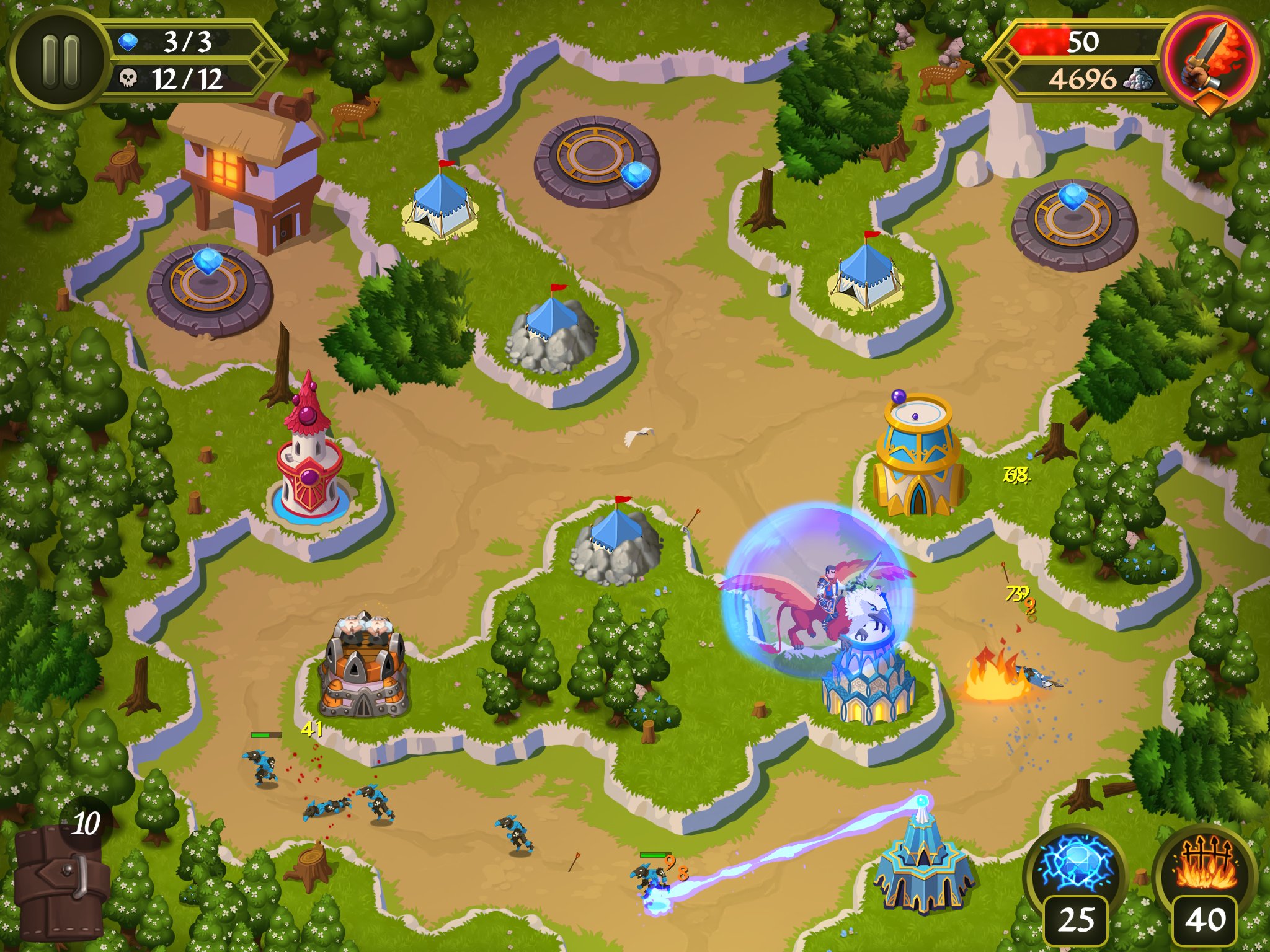 This is not necessarily a short game – it will likely take five or six hours to beat the campaign for the first time. Additionally, there are the three difficulties to play in each level, with the last being unlocked once the game is beaten. I do recommend playing later difficulties of levels as soon as possible, though, because while tower upgrades are limited in earlier levels, having powerful items and spells can make earlier levels extremely easy once returning to them. The fire shield was the destroyer of worlds for me, as when buffed up from certain items that boost fire magic, it can take care of enemy waves as they come in to the level.

And with items to equip and a currency to spend, that gets us into the fact that there are in-app purchases here. Don’t worry, there are no $99.99 in-app purchases; the max to spend is $5.99 on 120,000 coins, which will buy incredibly powerful weapons, shields, and rings. Special item sets can also be had for $2.99-$4.99. The game does hand out coins often enough that the IAP is really only there to jump ahead to buy really powerful items. The main campaign on normal difficulty is definitely beatable without any IAP, that’s for sure. The stat upgrades do help, but I don’t believe they’re the end-all, be-all to success. There are potions which can be used in battle, but these are so cheap that they’re only minor expenses, and are great for tough missions. 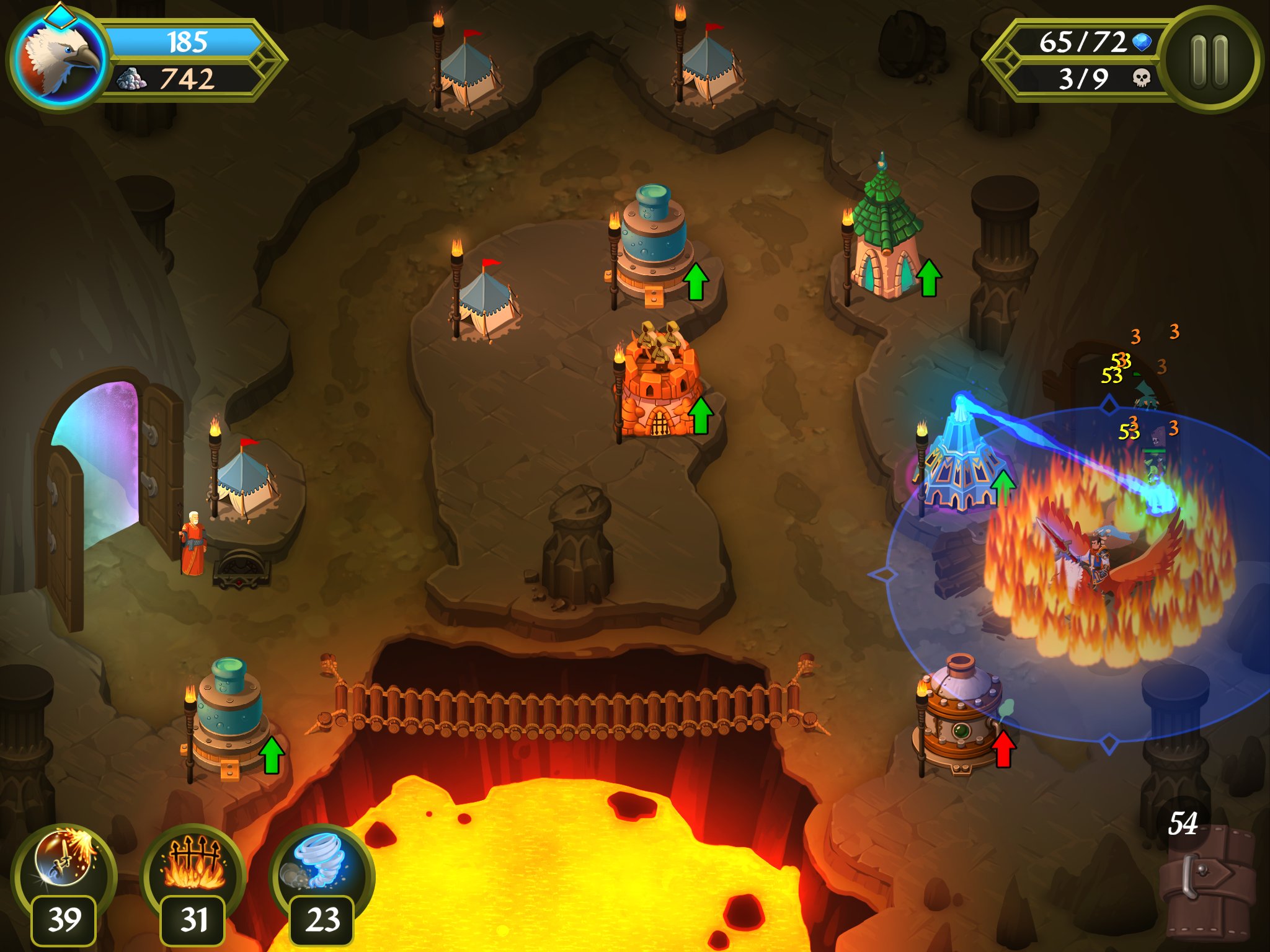 The magic upgrade system is fantastic, in that each level up grants a new magic orb, which is used for the skill trees to unlock new spells. But these skill trees can be reassigned at any point without penalty, so it’s possible to find the right spell loadout for any mission.

The environmental and interactive effects in each level are perhaps the hallmark of this game’s level design. This is otherwise a fixed-path tower defense game, but in some levels, it’s possible to close off paths by using a water pump. In one level, it’s possible to melt an iceway by using a fire spell, which will also drop enemies off into the drink. This can also be mixed in with different spells. I like to use the Twister spell to drag enemies to an ice bridge, then melt it, killing several powerful enemies at once. Some levels have weapons that charge up, or limited-use items to help forestall enemy attacks. While the levels themselves have plenty of variety in terms of number of entry points and bases to protect, the environments make sure each level really feels like an individual experience. 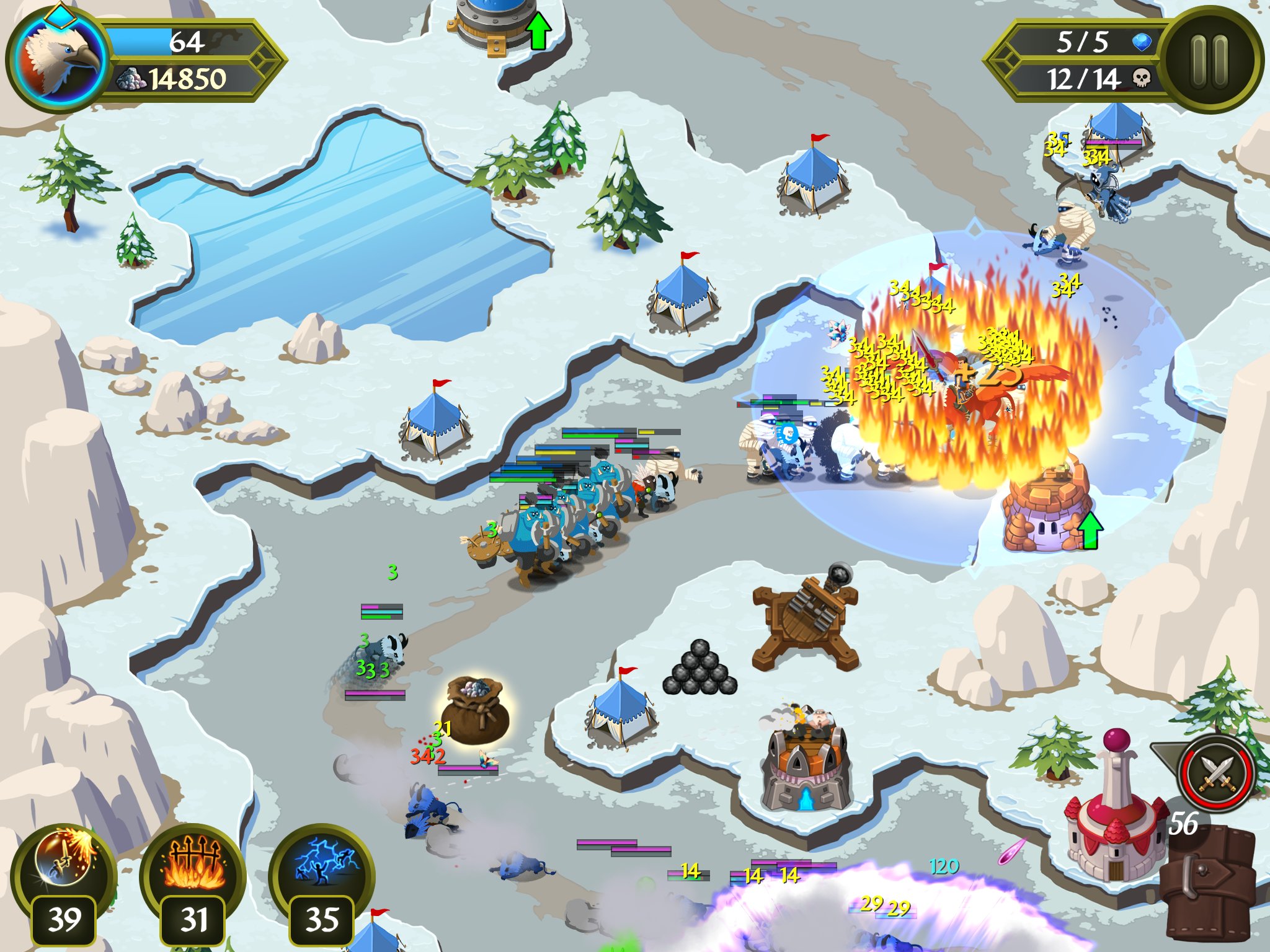 It’s the active strategization that makes Crystal Siege really feel special. I feel so much more into a battle in this game than most tower defense games. The towers offer enough variety and choice that it feels like I can use my preferred strategy to win. I like to focus on making the enemy-slowing towers as strong as possible, then using Twister to cluster a bunch of enemies together, utilizing the Flame Shield to deal loads of damage to enemies at once, with my items focused on making my fire spells as powerful as possible, and my mana economy and regeneration at such a point where I can rarely need to use a potion to refill my mana from my spell usage. But there’s plenty of room for a variety of strategies.

iPad owners who love tower defense need to give Crystal Siege a shot. The blend of RPG elements with tower defense makes for a fantastic combination, one that feels rather involved. And people who don’t like tower defense games might enjoy this in particular because it is so action-oriented. I’m not really sure why this is an iPad exclusive, as while the levels are really designed for the 4:3 iPad aspect ratio, some levels have scrolling elements, too. Add in some zooming or possibly tweak the levels for 16:9 aspect ratios, and it feels like this game could easily work on phones, as is the plan. Some of the detailed visuals and animations will be lost on smaller screens, sure, but I see no reason why this game can’t be playable on phones. As such, people who don’t own iPads will just have to wait patiently until this finally releases for iPhone, but it’ll be worth the wait.