It may be among the lowest hanging fruit of all when it comes to entertainment, but it’s hard to deny the raw comedic appeal of monkeys. They’re like little hairy people that we can teach amusing tricks to without feeling bad about it. They’re also very useful for filling in gaps if you lack a charismatic actor or character. Generally, people like monkeys, unless they’ve known a real monkey, in which case, they probably hate monkeys.

I don’t know, friends, I’m just trying to find something interesting to say about one of the more milquetoast racing efforts I’ve played in a while, Monkey Racing ($2.99). It comes from the same developer as the presumably successful Monkey Boxing ($2.99), and it’s possible that if that game won you over with its personality, this one might as well. As a racer, it has its share of issues, and while the goofy charms of the simian cast help things a little, there’s only so much magic a monkey can bring to the table. Just watch the Matt LeBlanc classic Ed if you don’t believe me. 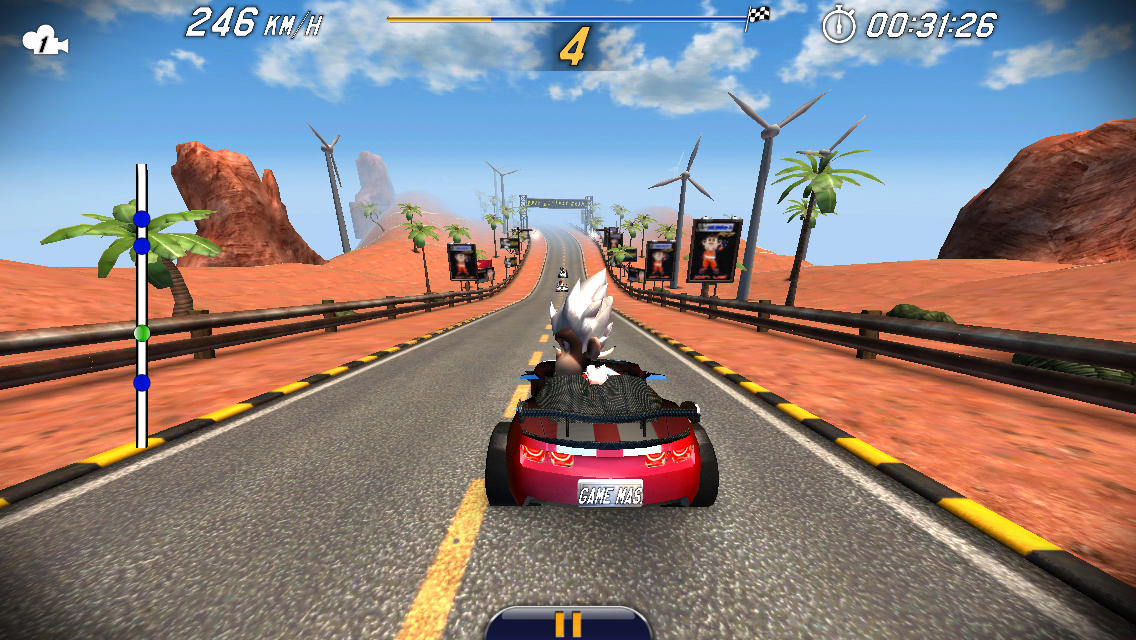 So, ostensibly, this is zany Mario Kart-style racing, just with monkeys instead of Nintendo characters. You can customize your vehicle to a great degree and unlock more parts and pieces as you go. You can also select from a variety of silly hats and headpieces for your driver, because if you’re not going to do at least that much, there’s no reason for monkeys at all. You then take to a surprisingly huge number of colorful, unusual tracks and race against five other monkeys in similar predicaments. Weapons, shields, and boosts litter the track, along with obstacles that will cost you some time if you hit them.

This should be pretty fun, and I suppose it is, a little, in the same way that a wafer cookie is delicious. After the race, you’re rewarded with some coins that you can use to upgrade your vehicle’s stats before heading into the next race. New races are unlocked by earning cups, and you more or less have to place at least third on all of them if you want to keep moving along. There are 80 tracks, and although many of them share visual themes, there are more different types than you would expect. 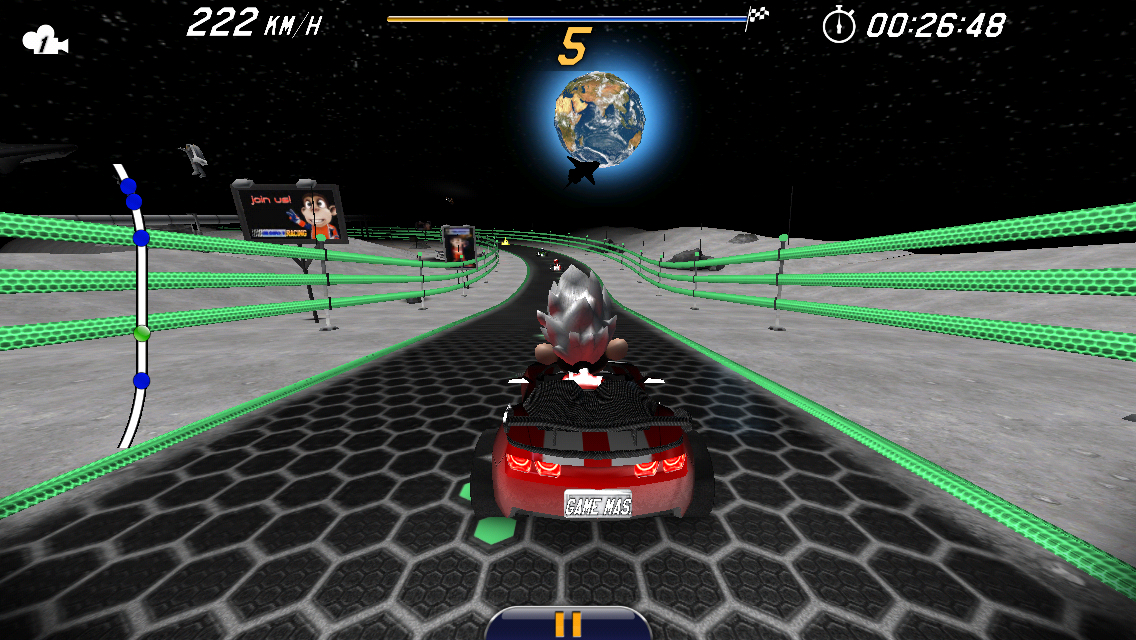 The problem is that, like most racing games, the enjoyment of the game hinges almost entirely on the racing, and it’s just not very interesting or particularly good. The roads on the tracks are extremely narrow and the result is that it’s all too common to crash into the racer ahead of you when you’re trying to pass them. The handling of your vehicle is heavily assisted, so you really have to try to veer off-course, which you will sometimes want to do to collect a vital item. It’s important to hit just about every boost, since the computer racers will, and you’re going to want to collect the right weapon, which is usually the red missile, and avoid grabbing anything that will replace them until you’ve used them up. The vehicle collision is a bit clunky, so you have to be very sure you don’t so much as graze any solid objects, because the effect is like hitting a brick wall.

The courses themselves are one-lap deals, so you don’t get much of a chance to memorize them, or even remember them. Because the racing itself is somewhat hands-off, each track sort of bleeds into the next mechanically. Get the red missiles, hit the boosts, do your best to squeeze through the you-sized gap to pass other racers. There’s no braking, the accelerator is automatic, and the handling is assisted. I’m pretty sure even a monkey could win, as long as someone helps him keep his vehicle upgraded. That part is important, because somewhere around the third set of events, the difficulty steps up, so you’ll either need to get a lucky distribution of items or grind up some coins to upgrade your ride. Most of the tracks let you pass as long as you finish in the top three, but when a boss character shows up, you have to beat them to proceed. 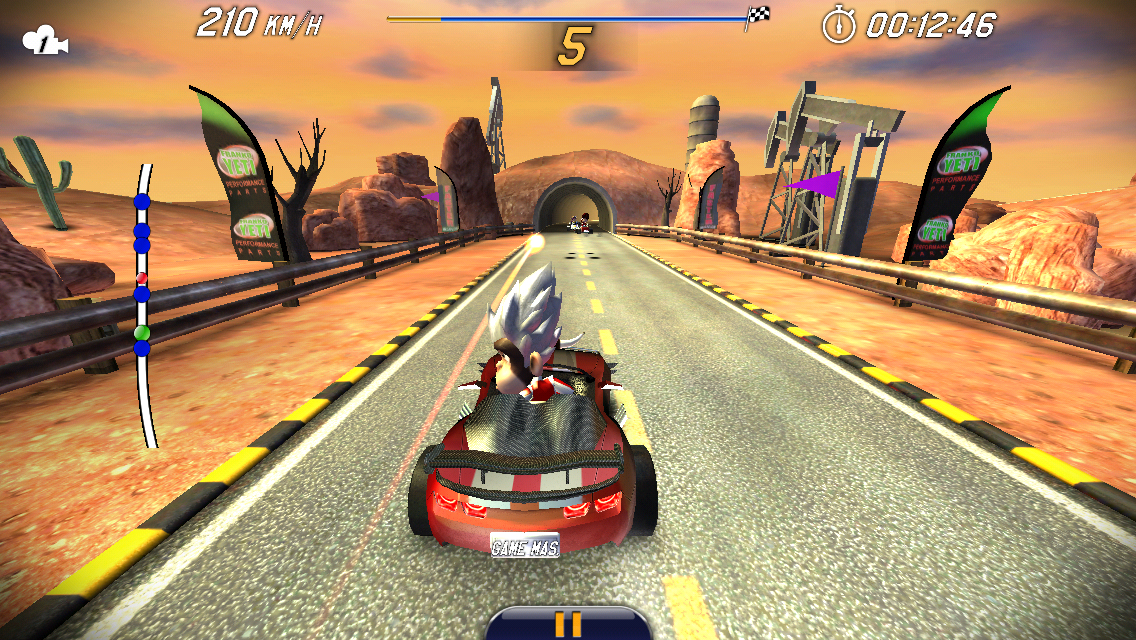 All of this repetition starts to grate heavily after a while, and it’s not helped by the fact that the game only has a single tune that plays during races. It’s not bad, but even a little variety would go a very long way here. In contrast, the visuals are both varied and quite well-done. It’s a nice-looking game, and it runs smoothly. The game makes the most of its assets by presenting track themes in a variety of lighting conditions, as well as making the odd change to the skybox to help things feel fresh as you proceed. Of course, with 80 tracks, you’ll see a lot of things repeating after a while, but on the whole, there’s more variety than you would expect, particularly at this price point.

The game also includes a multiplayer mode that is supposed to work via local wi-fi or online, but at the moment only works by the former. I didn’t have anyone else around to test it with, so I can’t speak to its charms, but it’s good that both types are included. Speaking of including all options, you can choose from touch, tilt, or physical controller for controls. I mostly stuck with the touch controls, but each method worked as it ought to. Unfortunately, the single player mode comes up a bit light in terms of gameplay modes. There are no time trials, battles, or tournaments spanning multiple races. The items are also few in number, including boosts, heat-seeking missiles, shields, and an area attack pulse.

There are plenty of racers on iOS for people to choose from, and even when it comes to kart-style racers, you’ve got things like Sonic & All-Stars Racing Transformed (Free) that offer a higher-quality racing experience, albeit frequently caked with IAP and monetization techniques you won’t find here. Monkey Racing sits more in the shallow end of the pool gameplay-wise with things like Angry Birds Go! (Free), with its main bullet points being that it’s a complete, IAP-free experience, and it has monkeys. If either of those things sell you on their own, by all means, give this a try, but I suspect most people would be better off avoiding this particular barrel of monkeys.