I found myself kind of curious about Wavefront ($2.99) when I saw that it was published by DeNA – and it wasn’t a free-to-play game. It started out as Waveform on PC, and now has been brought to iOS under the new name, for unknown reasons. Curious. But it still doesn’t answer why this was published by DeNA, as this game is paid without IAP at all, which is even odder given that it’s, well, DeNA. Did I wake up in bizarro universe? Perhaps not, but Wavefront is an interesting enough puzzler worth checking out. 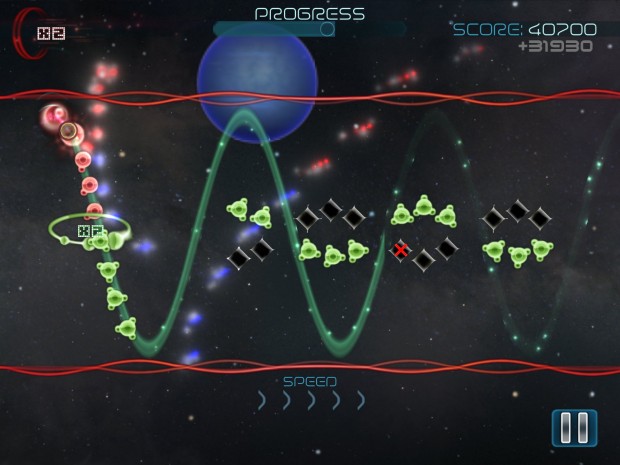 The game is played by moving an orb along a waveform whose frequency and amplitude can be modified by dragging horizontally and vertically, respectively. It makes a bit sense while playing, as you wind up making the wave’s path expand and contract, raise, and lower, as it travels along the path. The challenge gets layered over time. First, it’s about mastering the art of matching waveforms to the collectible orbs. Then, it’s about modifying the wave in real time as obstacles come in to play and orb paths change in sequence. And when the moving spikes get involved, it gets even more challenging. The game is constantly introducing new elements, like mirrors that can be bounced off of, in order to throw even more wrinkles into the equation. 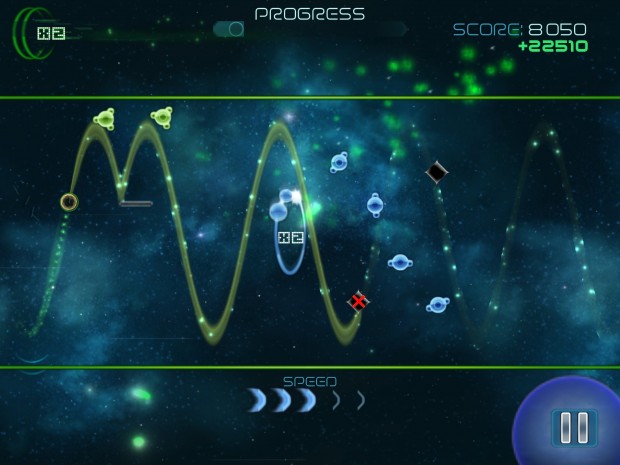 I’m not a huge fan of trying to navigate the moving obstacles, because I think it goes against the spirit of the game. To a large point, it’s hard enough to manage trying to collect the orbs, dodge the spikes, and modify the wave at the same time. A small degree of planning on the move is required. Wrecking that by making it so that I could suddenly hit an obstacle in the path seems anathema to the spirit of the game. 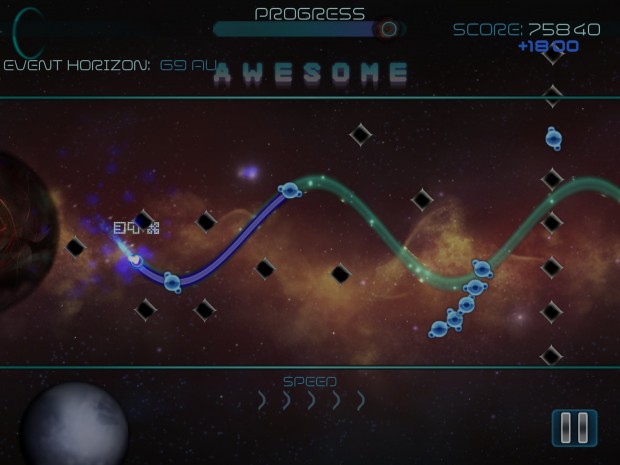 And that spirit is that this is a game that can be enjoyed by sitting back and just trying to play it and beat it, but also having enough depth to where trying to do well on a level requires focus and dedication. Getting 100% requires a lot of practice and precise performance in order to pull it off. But just advancing through the game? Manage to survive any one level, and you’ll do okay. Maybe collect some stars along the way to access some of the bonus levels, and to sharpen your skills. The game is also at least forgiving when it comes to failure – you’ll restart with one life at the last checkpoint you’ve reached.

As well, there’s a great amount of content here, especially for the $0.99 sale price (regular $2.99) – about 60 levels, with several endless ones available, and there’s DLC planned, likely based on the PC DLC. While I do take issue with some of the difficulty that pops up, otherwise Wavefront does a solid job at managing to balance out relaxing and forgiving gameplay while also rewarding skilled players. And hey, it’s a puzzle-type game that isn’t a match-3!