I’ve often felt that the genre that perhaps benefited the most from the jump from 2D to 3D was racing. Really thinking about it, racing is one of the genres that begged the most for polygons, having already spent years working in pseudo-3D with scaling sprites and optical tricks. Hardware that couldn’t manage said tricks tended to have racers that skewed the perspective to at least offer some sort of visual depth. Racers that opted for a strict, flat side-view to the action were historically pretty rare outside of obstacle course time-attacks like Motocross Maniacs. There are lots of reasons as to why that was likely the case, but it mostly comes down to the simple idea that it’s hard to express the excitement of racing from that point of view. If there is no depth, there’s no passing, no hairpin turns, no drafting, and collisions become hard to sort out. You have to find other ways to bring the beautiful tension that makes racing so compelling, and that’s just what Pixel Boat Rush ($0.99) sets out to do.

Pixel Boat Rush is a boat-racing game with an 8-bit visual style that uses a side-view of the action, with the waves looking more like rolling hills than water. The basic structure of the game has you clearing small tutorial-like missions to earn a license, which then gives you access to a particular league and the group of boats that go with it. The amount of events varies between leagues, but in total, there are more than 50 events set across the game’s 16 tracks. They’ll often have special rules or stipulations, so you’re constantly having to learn new tricks to advance, keeping the game fresh all the way through. You can also run time trials to get extra practice, or jump into the game’s arcade mode where you can set up custom races. The amount of content in the game is quite hefty, with lots of stuff to clear and unlock. 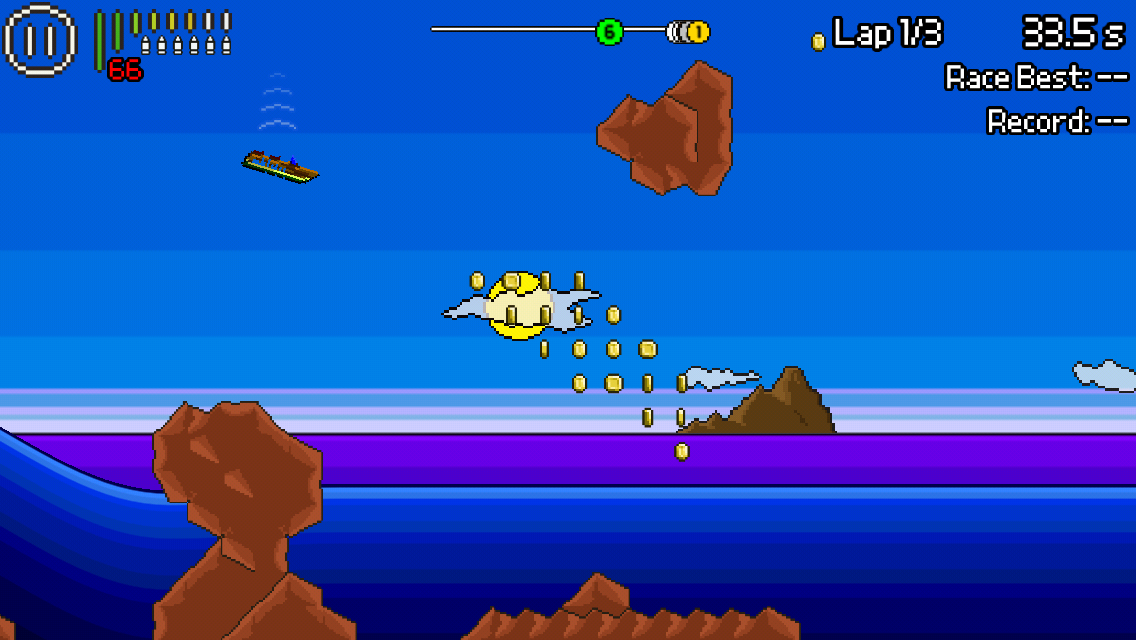 It’s easy enough to work the basic controls, but there’s a lot of technique involved in playing well. It kind of takes some cues from Tiny Wings ($1.99) in that you’re tapping and holding the button according to the terrain rolling out in front of you, but the way it works in practice is very different. If you just hold the accelerate button, you’ll catch huge air off of waves, and while that looks cool, it’s usually not good for your speed. The key is to briefly release the button as you’re going up a wave, which sticks you to it and allows you to maintain your speed. Sometimes, you will want to take to the air to avoid obstacles or collect items, but even there, you can accelerate your drop by releasing the button. You have to pay constant attention to what’s in front of you to know when to hold and release, so even with simple controls, the game has a lot of challenge to it. You’ll also get weapons and defense items before too long, and those come with their own buttons, but even at that point, it’s still very easy to play.

The waves are an elegant way of handling the fact that the perspective doesn’t allow for turns, keeping you busy all throughout each race. You’ll also have to keep an eye on your opponents, but not because of collisions or anything like that. You can actually pass through each other quite harmlessly. Instead, it’s the weapons you need to be wary of. Most of the time, getting blown up will only cost you a little time, but in certain events, you only get one chance, so it’s a good idea to keep an eye on your armor and sometimes slow down so that you can be the predator instead of the prey. This presents another reason to take to the air, since you’re a lot harder to hit when you’re not on the water. The AI is strong but beatable, and even if you lose, you’ll still earn something that will help you come back a little stronger. 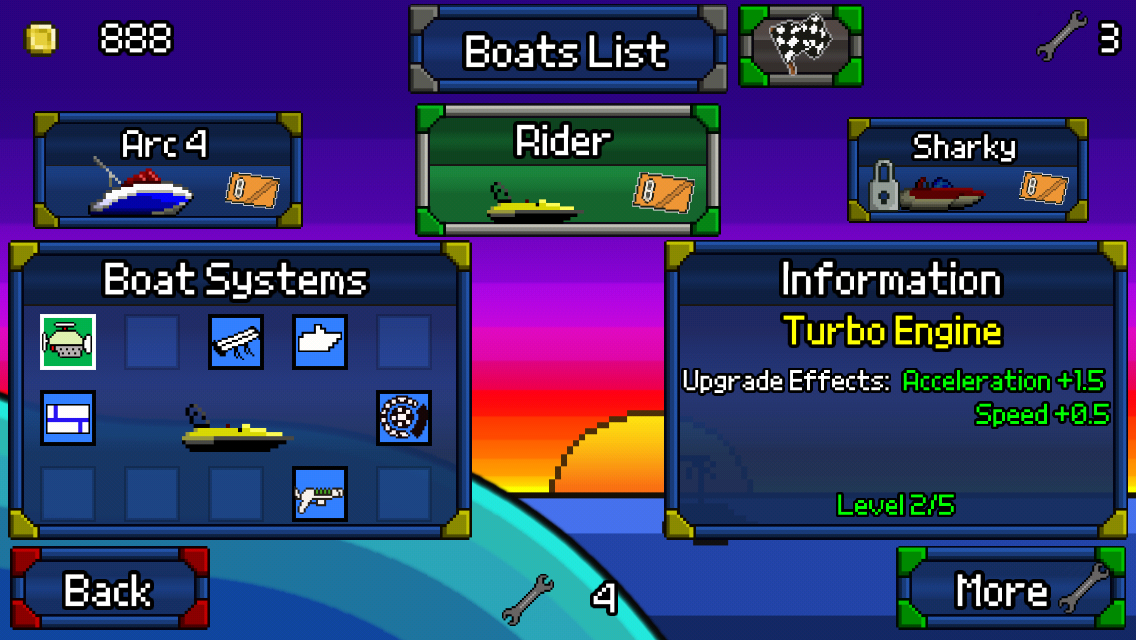 Racing earns you both coins and wrenches which can be used to buy new vehicles and upgrade existing ones. Coins come in at a pretty slow rate relative to the cost of new boats if you’re losing events completely, but wrenches come along pretty steadily no matter your fortunes. This means you can always upgrade your boat if you’re having trouble cracking an event, ensuring you never get stuck too badly. The game is even good about chucking coins at you in the lead-up to moving to the next league, since you will have to buy a new boat from that license class to compete. If you’re foolish with your coins, you might not be able to afford the best one right off the hop, but you will certainly be able to afford something.

There are tons of boats to unlock and buy through the course of the game as well, each with different parameters, weapons, and potential upgrades. I counted more than 45 in total, with many of them making fun references to games and other pop culture. Some of the cool ones need to be unlocked first by earning a certain number of cups in events, but they’re generally not far out of reach as long as you’re progressing in the career mode of the game, and it’s more than worth the trouble just to see all the fun designs. I’m pretty sure one of them even referred to the Rare classic Cobra Triangle, which is the game that instantly pops into my mind when I think of boat racing. Pixel Boat Rush isn’t as mercilessly difficult as that game, but it does have some teeth to it, especially during the strict license tests. You’ll have to learn how to take advantage of the ins and outs of the gameplay if you want to win, and those license tests are there to make sure you learn, even if it kills you. If all else fails, you can retreat to the arcade mode or run some time trials for a while to get more practice, though. 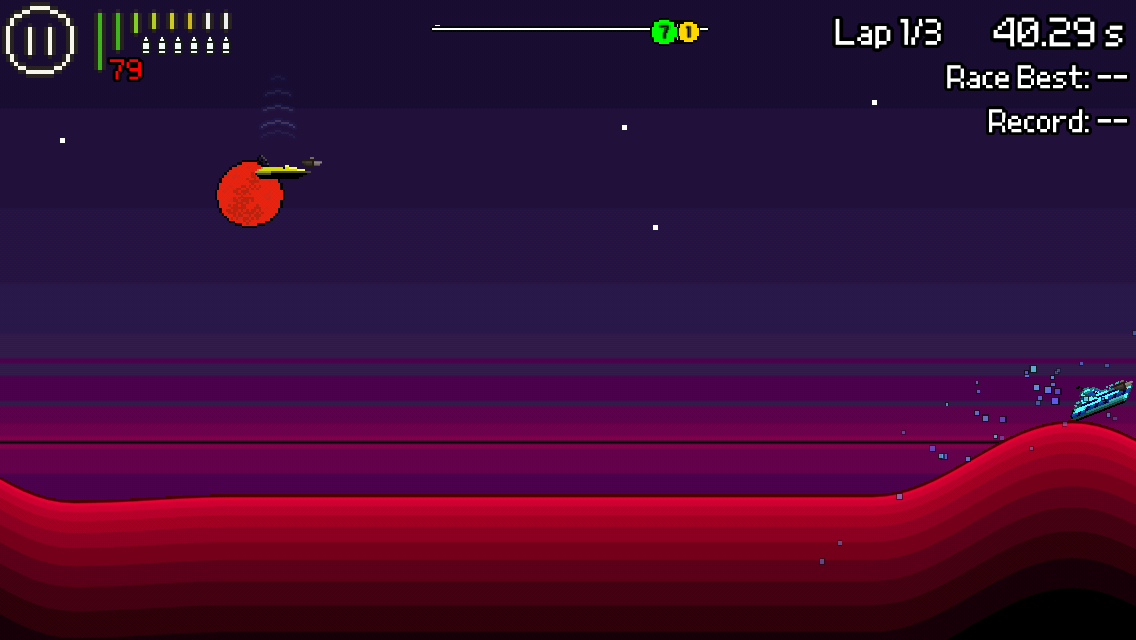 The game uses retro-style graphics, with stunning color choices that make certain tracks look gorgeous. There’s nothing fancy going on with the water here, as it’s essentially static for the sake of the gameplay, with only minor distortions resulting from impact. The music is a great grab-bag of chiptunes that covers several different styles. Unless you have an issue with games that use a faux-retro presentation, there’s not much to complain about in Pixel Boat Rush‘s style. The game also has excellent Game Center support, with tons of leaderboards and a big list of achievements to gun for. It also supports MFi controllers if you happen to have one.

It took me a little bit of time to get the hang of Pixel Boat Rush‘s unusual play mechanics, but once I did, I had a really great time playing through it. It has a unique feel to its gameplay, and it’s stuffed to the gills with content. I also personally really enjoyed the look of the game, but your mileage may vary on that one depending on how impressed you are with bold colors and pixels. This is the most fun I’ve had racing boats in a video game in quite a long time, and I’d strongly recommend it to anyone who enjoys side-scrolling arcade games or can appreciate a different angle on the racing genre.