Over the years, I feel like I’ve developed a pretty good nose for my own tastes. Usually just from reading a brief outline and seeing a few screens, I can at least figure out in ballpark terms how well I’ll like a game, and it’s rare for a game to fall outside of those admittedly broad estimates. Surprises come in two flavors, then. Sometimes a game I don’t expect to like much turns out to be totally up my alley, like SEGA’s Yakuza, and other times, a game that I think looks great just doesn’t click for me at all. Unfortunately, Card Dungeon ($2.99), a game that initially appears to have a great deal in common with the PC game Card Hunter, is an example of the latter. It’s a roguelike with an interesting hook and a great visual style reminiscent of a board game, and while I could list off a lot of things I think it does very well, it never manages to come together into something I can truly enjoy.

You play as a character known as the Crusader who has to save the world from something called the Nethermist. You do this by storming some dungeons and killing some monsters, of course. There are seven dungeons in the game, each with three levels. You have to explore each level to find the mini-boss or boss and defeat them to open up the portal to the next. As usual for a roguelike, each dungeon floor is a randomized mix of rooms and corridors that you traverse square by square. For each move you take, other creatures and hostile monsters can take one. This is where my first big problem came in with the game, and it’s probably my biggest annoyance with it on the whole. While most roguelikes use a system like this, they usually at least have the option to make the enemy’s turn go by faster. Not so in Card Dungeon, as you have to watch each piece, hostile or neutral, slowly take their turn. In less crowded rooms, it’s a minor irritant, but bigger rooms with three or four other creatures drag to the point that it feels like it takes forever just to clear them out. Combined with the relatively large size of each dungeon map, this gives a whole new meaning to dungeon crawling. 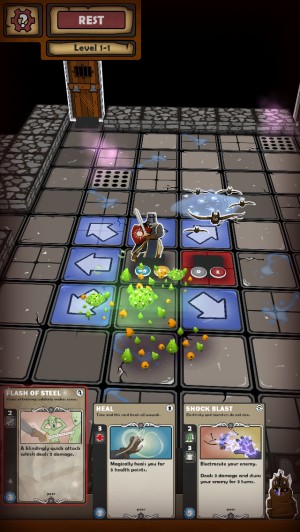 I’m getting ahead of myself, though. Let’s talk a little about some of the positive things that make Card Dungeon stand out. In terms of gameplay, the main thing it brings to the table is its card system. Moving around is free, but any other action requires the use of a card. Your character can carry three cards at any one time, so if you want to pick up a new one you find lying around, you’ll have to discard something from your hand. After a certain number of uses, a card will be worn to the point that you will no longer be able to activate it. You can hang on to a favorite card until the last drop, but that might leave you at a serious disadvantage if you can’t find anything good to replace it with in the near future. Alternatively, you could toss your cards whenever you find anything new, to ensure that you will never be without a full hand. It’s up to you how far you want to push that, and that element of the game is both very clever in its design and very satisfying in its execution. It’s an interesting way to streamline the core roguelike concept of using everything at your disposal lest you lose it. You really have no choice here, with such limited resources.

This can leave you in a tough spot if you don’t manage things properly, of course. You could end up with no useable attack cards, running from a pack of goblins as you frantically try to find something, anything to stave them off with. If you’re incredibly unlucky, you can end up completely up the creek without a paddle. I think that kind of situation makes for a good story, though, and that’s half of the fun of roguelikes. The real problem of having a pack of anything on your tail in this game is that each turn ends up taking forever. It sucks a great deal of the tension out of any desperate situation. There doesn’t appear to be any way to save mid-dungeon, either, so if it’s taking too long to clear a level and you need to do something else, you’ll have to start from the beginning of that floor again when you come back. This is, again, something that isn’t normally a problem in a roguelike due to the generally quick pace they tend to keep, but it’s a whole other issue here. 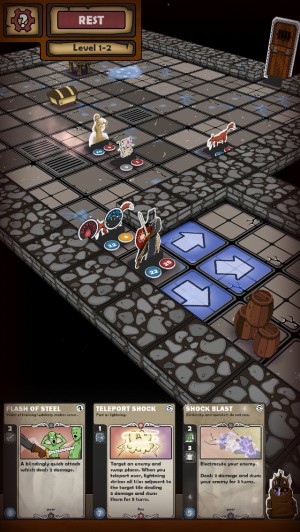 There are two other ways cards come into play in Card Dungeon. When you first start the game, you are asked to choose one good trait and one bad one from a selection of cards. Initially, you only have two cards to pick, but as you play, you’ll unlock more, allowing you to create some interesting combinations. The other types of cards you’ll find are equipment cards, which give you bonuses and other benefits. These don’t count towards your action cards, of course, and once you’ve found a nice set of gear, the game becomes a lot easier. No faster, sadly, but certainly a lot easier than most of its peers. If you’re even a little lucky with the cards you come across, you can stomp your way through most of the game without much resistance.

I love the way the game is designed from a visual standpoint. Like Card Hunter, it looks like a board game, complete with little stand up characters sitting on bases. Each piece’s hit points and mana points are even located on the base, which is a little bit of a pain in terms of convenience, but still a nice detail. You can move the camera around to get a better look at things, or just to give yourself a cool cinematic angle, but it’s easy to obscure details if you’re seeing things from anywhere but the default viewpoint, so don’t go too wild. The sound effects and music are decent, though basically exactly what you would expect from the theme and genre. The game was incredibly crash-prone in its initial release to the point that you couldn’t even finish the game, but it seems to be relatively stable after its first update. Sadly, there aren’t any Game Center achievements in here, which is too bad, because the game is set up in a way that you could do some really fun ones.

I love the basic idea behind Card Dungeon, but I’m really lukewarm on the way it’s all put together. Other than the positively limping pace of each turn, it doesn’t make any huge mistakes, but it also doesn’t really do anything that would make me recommend it over something like Dungelot ($0.99) or a bunch of other roguelikes or roguelites. I feel like all of the pieces of an interesting, fun game are laying around here somewhere, but they just never really come together the way they should, leaving the adventure lacking as a whole. It has a winning presentation, I’ll give it that, and it at least made me think about my strategy on a fairly regular basis, but ultimately, the game irritated me more often than it enchanted me.