Earlier this month we offered a hands-on preview of Actvision’s Skylanders Trap Team (Free). Ported over by the folks at Vicarious Visions, Trap Team is being billed as the first of the series to not only have a simultaneous launch across console platforms and iOS but to also offer the complete console experience on Apple’s platform. It’s also an absolutely amazing port that feels right at home on iOS and offers an experience with its figurines that is unmatched by anything else currently available on the App Store.

If case you didn’t check out our hands-on or aren’t familiar with Skylanders, Trap Team is a third person action-adventure title that focuses on character development and management. This is done via the game’s physical hooks: a bluetooth “portal” that lets you place physical Skylanders figurines onto it which lets you play as them in-game. Picking up the starter pack provides two figures to start, and there’re over 30 unique Trap Team characters that can be purchased separately and played in-game. 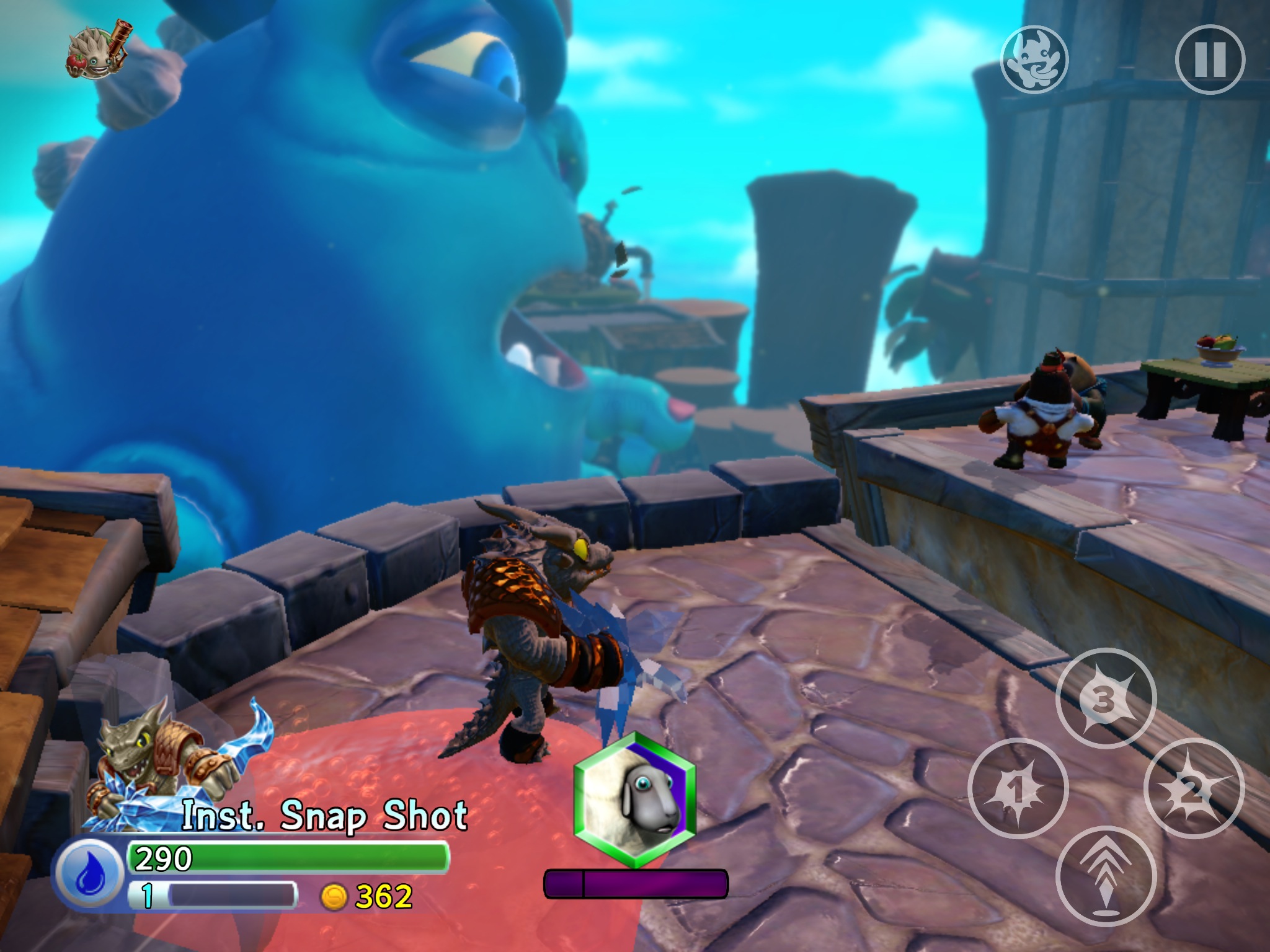 Characters are categorized by element, as well as type, with ‘Trap Masters’ being the most expensive and powerful characters while normal Skylanders and Minis offer a variety of different options for play. Trap Masters are really the important characters, however, as they’re needed to open up optional ‘Elemental Gates’ in-game that can only be opened with Trap Masters of the same elemental affinity. Players can also utilize ‘Trap Crystals’ which are used to trap villains in-game and bring them out temporarily for battle or puzzle purposes (some quests can only be unlocked with the right villain). Again, players get two trap crystals to start, and must purchase the rest of the elemental traps to be able to capture every type of villain.

Being a Skylanders title, a lot of your enjoyment in each of the modes rests on how many actual figures you own. In this regard, it’s easy to dismiss Trap Team as yet another game that preys on the dollars of players (or parents of players) with it’s “requirement” to purchase additional characters in order to fully complete the game. However, Trap Team has made some improvements in giving off this impression. For starters, players only need to purchase one Trap Master of each elemental in order to access all elemental gates. In addition, a villain vault that can freely transfer villains between traps means players only need to own one of each elemental trap crystal in order to potentially own and use every villain (assuming you swap them out between missions). 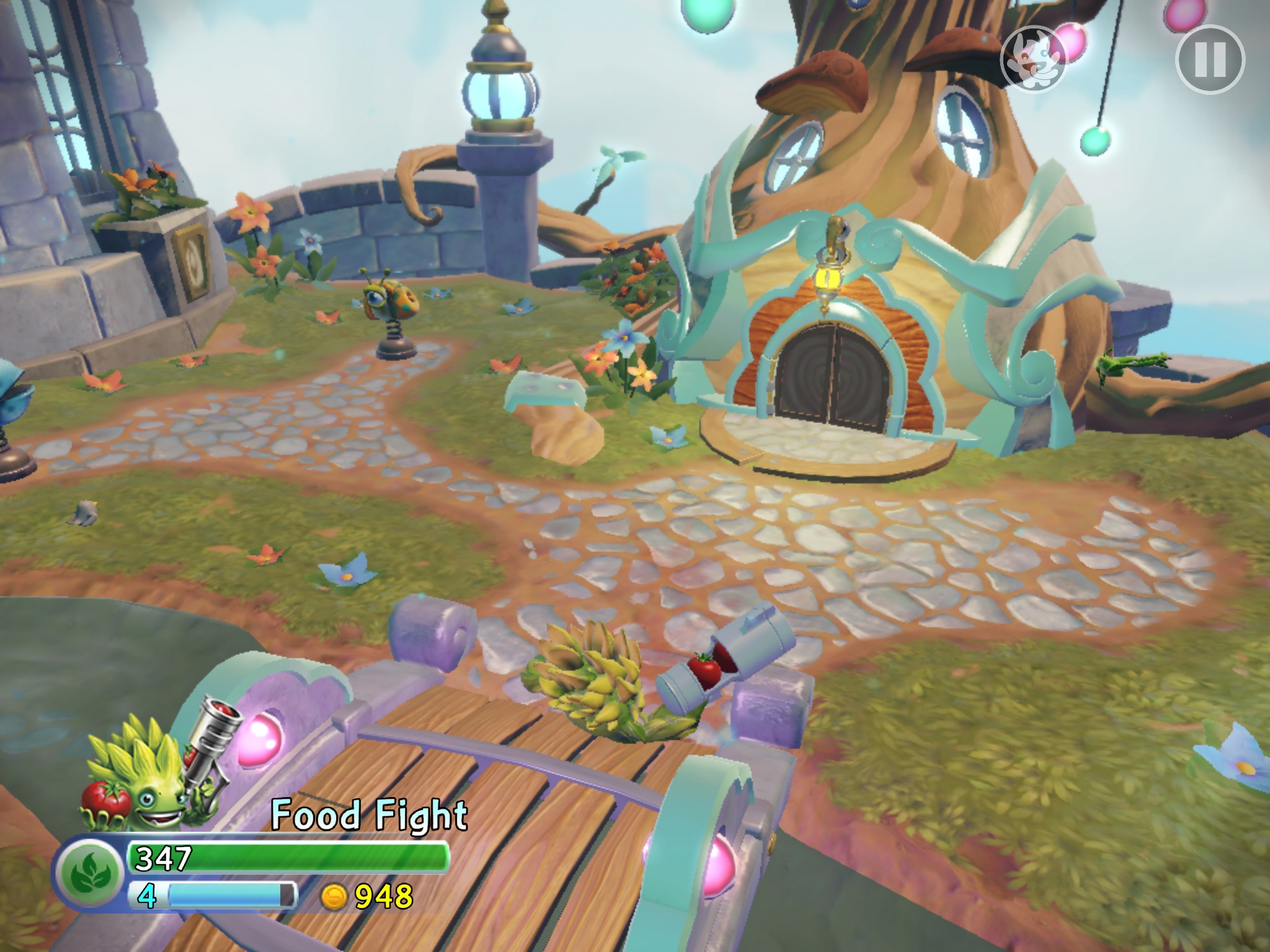 Yes, it’s still a lot of things to buy for completion’s sake, but it’s a far cry from previous editions that put a greater emphasis on needing every individual figure in order to unlock everything. The only downside to this approach is Trap Team’s decision to focus exclusively on the new Trap Master characters for story unlocking. Players can use any of the previous characters in the series, but they won’t be able to unlock any of the supplemental areas and the decision to not raise the level cap means there’s little reason to play old favorites that have been maxed out. On the flip side, Trap Team makes for a good time for new players to get in the fold and not be intimidated by needing older characters.

Also, while some may decry the portal as a gimmick, I was impressed with how well it integrated with the game itself. Swapping out characters is incredibly easy and relatively quick which is important considering how many times you’ll find yourself doing it. In addition, the portal itself is really cool, with lighting effects that trigger depending on the type of character on it. Even the trap crystals are pretty cool, as the crystal area on the portal lights up with the villain inside speaking to you on a regular basis. This was actually an aspect I really enjoyed as it added a ton of personality to the game considering there’s a ton of villains to capture each with their own funny one-liners to hear. Again, it sounds like a gimmick in writing, but it really does add to the overall experience and I was impressed with how well it works (don’t worry, you can turn off the sound if need be). 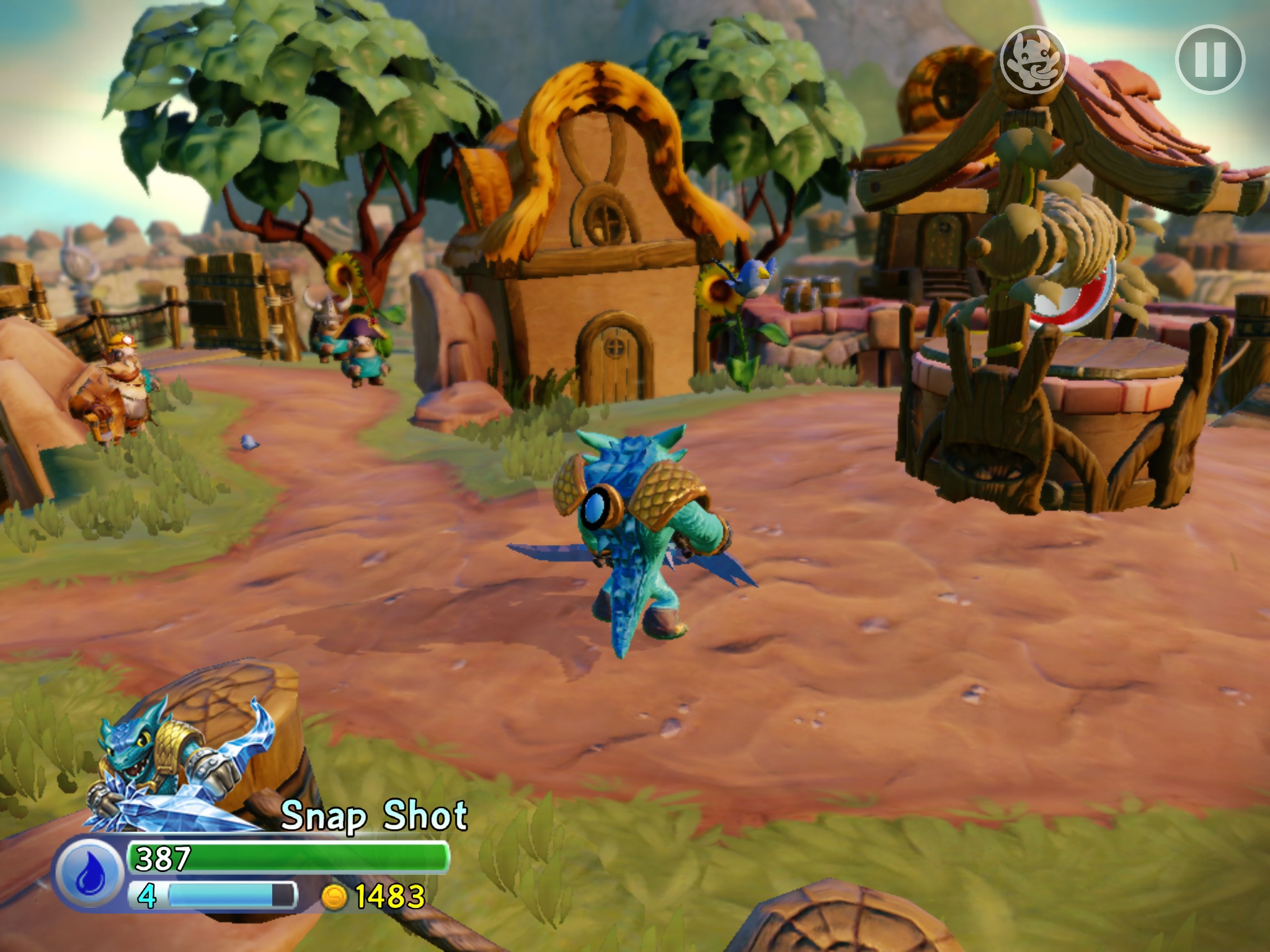 Core combat itself is basic, but expands significantly in proportion to the amount of characters you have. Each Skylander has different stats, different elemental affinities (which are affected depending on the enemies and elemental region you are in) and each Skylander can level up, earn coins and purchase move upgrades. Each figure I played with also had a diverse move set, which adds to the motivation of purchasing a few characters. It’d be easy to disregard purchasing new figures if move sets were too similar, but Trap Team’s cast of characters is diverse enough in terms of stats and move sets that it actually works. Even 2-player co-op is available with another bluetooth controller. 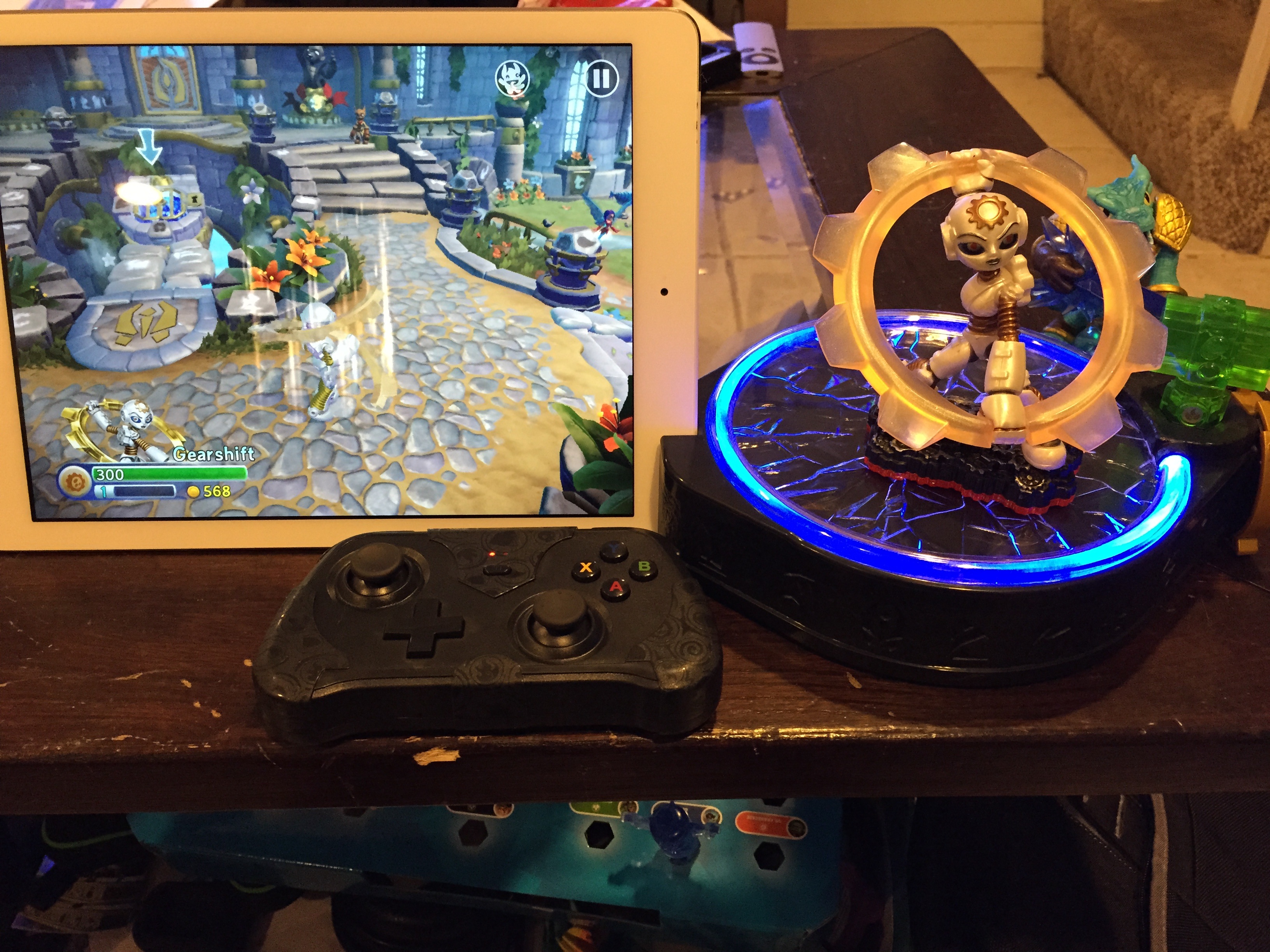 Otherwise, I really encountered no issues with Trap Team. The visuals look console-quality on my iPad Air, the included bluetooth controller (another nice touch)  feels great, and the story was entertaining despite its obvious slant towards kids. The only complaints I really had were the lack of full subtitles for the audio tracks in the game and the fact that the controller only works with this game alone. The requirement for a recent iPad model may also disappoint some.

Being a port on a mobile device, there are a few notable quirks worth mentioning. If you plan on playing Trap Team without the portal, you’re limited to two characters (coincidentally, the two that you get physically when you buy the starter kit). In addition, the stats for these two characters are completely separate from the stats of the same figures, which is most likely a byproduct of the fact that all stats are stored on your actual figure (letting you take them across platforms with stat progress intact). Thus, while you can certainly play Trap Team without the portal and starter pack in its entirety, it’s certainly not the full experience (and not particularly recommended from a monetary standpoint). Relatedly, I wouldn’t recommend purchasing the digital packs, as for the cost of all three (which encompass all content in the game) you can nearly purchase the starter pack with the portal and enjoy the full experience.

However, assuming you’ve got the starter pack and a few figurines, Skylanders Trap Team is an amazing experience. The combination of portal interaction, plethora of characters and development, along with an extensive amount of content with high production values puts it almost in a league of its own. The high cost barrier to entry will certainly be off-putting for some, but folks that invest will end up with an experience that matches and even exceeds that of its console siblings (due to the portable nature of the system). It’s certainly worth checking out the free demo to see if it’s worth the cost, but in my opinion it certainly is.