Adult Swim has a done a great job with its iOS titles and now, with the help of developer PikPok, they are taking on the Match-3 genre. Adventure Xpress (Free) continues the excellent off-beat motif of most Adult Swim titles with you taking the role of a mail courier in a fantasy setting. Meanwhile the Match-3 gameplay is a bit simplified, but has everything needed to offer an enjoyable experience (even with the freemium elements).

When it comes to gameplay, Xpress focuses less on introducing new concepts and more on streamlining Match-3 gameplay to a point where it’s easily accessible even with some Action-RPG elements. Entering a locale on the game’s map pits players against 2-4 monsters. Taking down a baddie typically rewards a bag that contains randomized loot. Defeat all the enemies to open up the loot bags and earn experience. Advancing across the map is fairly straightforward, although Xpress does offer a few optional, more difficult battles that reward premium currency. 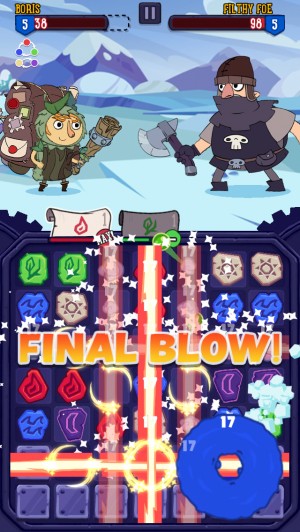 Players can unlock up to five spells (but can only use three in any battle) that are recharged by matching its elemental tiles, but the spells themselves are pretty basic and limited to elemental damage plus one special effect (healing, stunning, etc.). Character upgrades are limited to purchasing and equipping weapons and armor, and new upgrades are available every couple of levels (experience is earned by winning battles).

From a freemium standpoint I found Adventure Xpress to be pretty fair without any significant causes for concern. The free-to-play elements are restricted to two facets of gameplay: a timer-based system for replenishing potions (which are used to recover health and restart battles) and a freemium currency that’s used to unlock weapons, armor and spells earlier. Eventually, the difficulty does ramp up and you may find yourself using a few potions and having to make a decision to wait, but it’s relatively easy to replay previous maps to grind for experience and gold which lets you upgrade your equipment.

Some players may balk at the necessity for grinding, but the actual Match-3 gameplay in Adventure Xpress is very well done. Battles never feel drawn out, and there’s great balance between strategically matching tiles and potentially hitting big combos. The spells feel a bit tacked on, but there’s some strategy involved with building up spell levels vice launching them ASAP. Also, even though they basically amount to bigger stat numbers, upgrading weapons and armor feel meaningful, and later upgrades offer some interesting choices as far as stat priority. 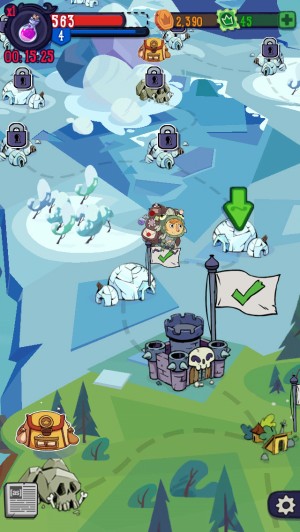 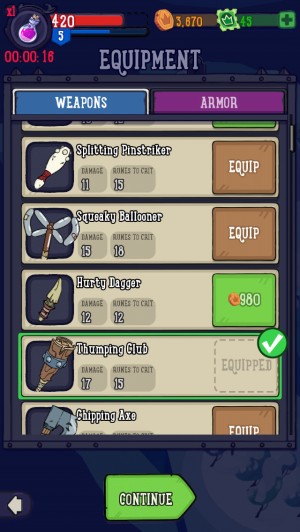 The only disappointment I really encountered is the lack of enemy variety. Each area really only has a handful of unique enemies that are interspersed with generic bandits that appear across all areas. In addition, other than stat increases, there’s little in terms of special moves or traits for enemies. Also the story in Xpress, which is told mainly through the letters you carry to the various locations, isn’t much to write home about.

The above disappointments will probably be primarily reserved for those looking for a deep Match-3 adventure. While I don’t think Adventure Xpress has enough depth to satisfy that demand, it’s still a pretty fun Match-3. The light RPG elements add just enough motivation to come back, while the large map and loads of battles (as well as increasing challenge and the occasional need to grind) make for plenty of content. Most importantly, the gameplay does a great job of balancing between approachability and challenge which is even more impressive consider its freemium nature. There’s little reason not to at least try Adventure Xpress and if you’re wary of freemium to begin with, this one is certainly worth checking out.