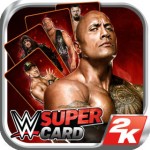 The mobile platform has created a market that I can’t get enough of — digital tabletop. Although the online marketplace has created potential issues in terms of overcharging for cards, expansions, or game pieces, playing a tabletop game without having to deal with any of the setup is a godsend in many instances, particularly with games that take forever to lay out. It also allows games to flourish that wouldn’t have existed otherwise, like WWE SuperCard (Free).

The setup is rather simple, and will be familiar to anyone who has played card battle games. To start, five cards are chosen from a pool. All of them have a certain statistical spread — power, toughness, speed, and charisma. For each round of play, a certain stat bonus will be favored — so you may have John Cena, who has a high charisma rating, and Big Show, who has a high power rating. You’ll want to put them in on their respective advantage rounds, taking into account that subsequent matches in each game will have other stats in the mix. Sometimes you’ll have tag-team rounds where you choose two at once, and sometimes multiple statlines will come into play.

You can modify some stats with support cards like ladders and chairs to give yourself a little boost, but that’s the gist of it. Everything is fast-paced, and very simple to pick up. Comedic animations like suplexing cards will keep you laughing and interested as you essentially pick card after card and make minor modifications to it. For reference, there’s no energy mechanic — you just play to your heart’s content. Thank goodness! The only major problem I have with the game is that you can’t go head-to-head with someone currently — you’re just playing with random people by way of matchmaking.

If you lose a round though, you always get to choose one card to add to your pool. If you win, you choose two. This simple conceit allows for you to play for hours on end collecting cards without feeling like you have to dole out bags of money to stay in the game. Sure, some cards will grant you better bonuses and having a well-rounded deck will allow for some advantages, but the game is a casual enough affair where you won’t feel tempted to spend. What I love about SuperCard is that the roster goes back pretty far, and should get you up to speed with the current superstars as well.

The fuse mechanic also allows for a small crafting system of sorts. If you get doubles, you can fuse those cards into each other and boost their stats. You can also trade lower-end cards in for a potential boost as well. It’s a brilliant system that allows you to boost the cards that you want and spend less time amassing a gigantic deck of hundreds of cards.

Because of the way the game is designed, you only really need a small deck to succeed. In other words, you’re not going to feel pressured to get a minimum of 100 rare or unique cards like many other card games out there. It’s easy to play and feel content. 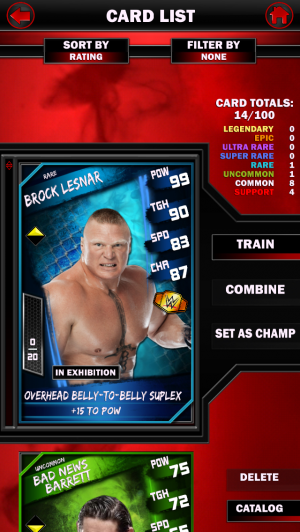 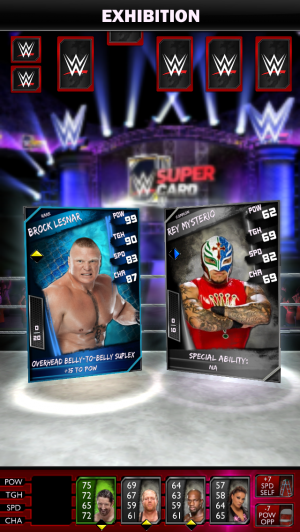 In terms of the IAP system, everything is ran by credits, and it’s a very straight-forward system that isn’t designed to trick you into what you’re getting. Credits run at an average of 600 for $5. 600 credits can net you seven Superstar cards. If you opt to go into the higher tiers you can get guaranteed rare cards, but again, you can get by just on normal cards alone — the only reason why you’d flirt with rares is if you get heavily into the collecting aspect. If you’re so inclined you can spend 10 credits for a “Title Match," which doubles your rewards.

For a new IP, WWE SuperCard manages to hang with the best of them. Even without purchasing cards left and right you can still enjoy yourself, which is great news for skeptics or WWE fans. Hopefully more modes of play will enter the picture at some point, but for now you can go a long way without spending anything.