Several months back, mobile gamers were treated to Alphadia Genesis ($4.99), the first kind-of-3D RPG from Kemco, courtesy of developer EXE Create. Since then, Kemco’s released another half dozen or so games, but they were all using older 2D engines, even EXE Create’s Fanatic Earth ($7.99). Well, we’ve finally got our second game using the 3D battle engine in Illusion Of L’Phalcia ($8.99), and it just goes to show that if you’re dedicated to churning out an RPG in a span of weeks, it doesn’t matter if you’re using 2D or 3D graphics, the results are still going to be mixed.

In Illusion Of L’Phalcia, we follow the story of a jerk with a heart of gold named Ryser. He’s seeking the legendary Sword of Amal, said to grant the wishes of its holder. The sword has been hidden away to prevent people from using it for evil, but the inexplicable key to finding it has nothing to do with proving one’s virtue. Instead, you simply have to seek out six magic map pieces laying around on the floor of various caves and dungeons around the world.  As protective measures go, that’s like hiding the liquor in a cabinet that can only be opened after a delightful treasure hunt around the house, but I’m not the Sage Elpis, I guess. Ryser and his feline buddy Cougar are just in it for the wealth, but they end up meeting a few more people searching for the sword. One of them is the hiding-in-plain-sight Princess Tiana who, if you’re checking off your anime tropes list, is the prickly, somewhat stuck-up heroine who starts off hating the hero but ends up loving him. Han and Leia here end up spending a huge part of the game’s script bickering with one another, and the other party members constantly hanging a lampshade on it doesn’t make it any more digestible. 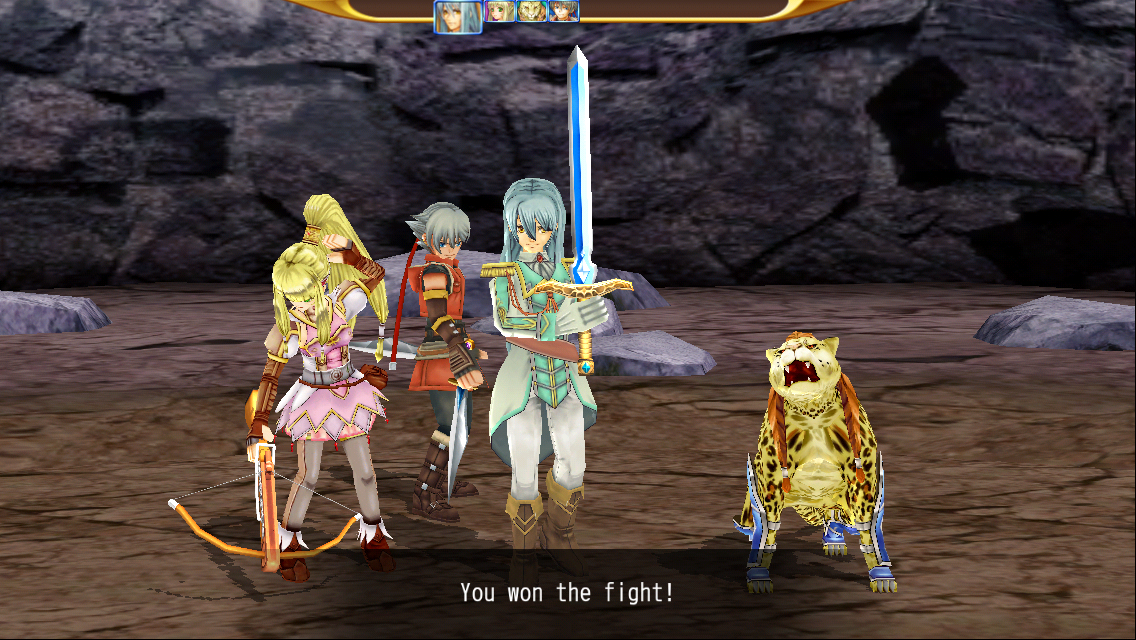 Generally speaking, the game plays out fairly similar to Alphadia Genesis and indeed most of Kemco’s other RPGs. Go to a town, get some new gear and info, head out to the nearest cave or dungeon, kill the boss, and head to the next town. Repeat until obvious bad guy rears his obvious bad guy head, then kill him and celebrate with a lovely dinner at the Olive Garden. As usual for this particular developer, the overall plot is pretty bland, but the quality translation and character interactions result in something that is fairly engaging anyway. The battle system is equally boiler-plate, a turn-based affair where you can use regular weapon attacks at no cost, or magic attacks and special skills at the cost of MP. While you’re fighting, you’ll charge up a special meter that will allow you to pull off a team attack when it’s filled. The game offers two difficulty settings, and if you play on normal, you’ll find it has a nice bite to it from around the middle of the game onward, even without tackling some of the game’s many bonus boss monsters.

Your characters will learn certain set moves upon reaching particular levels, but magic can only be learned by equipping a special gem type to that character’s rune. The rune equip system is the one thing this game does that I haven’t seen in another game recently. Each character has a different rune, a grid of a particular size and shape. When you start, some of the squares on this grid will be filled with crosses, but as you gain levels, they’ll slowly be removed. As you play, you’ll discover gems that you can affix to this rune to give you special abilities, magic powers, or passive benefits. The catch is that each gem is a different size and shape, and you can only equip them if you have a spot on that character’s grid for them. You can rotate the pieces around and move them as you like to try to fit them in. It’s pretty fun to play around and see which pieces you can combine for the maximum yield. 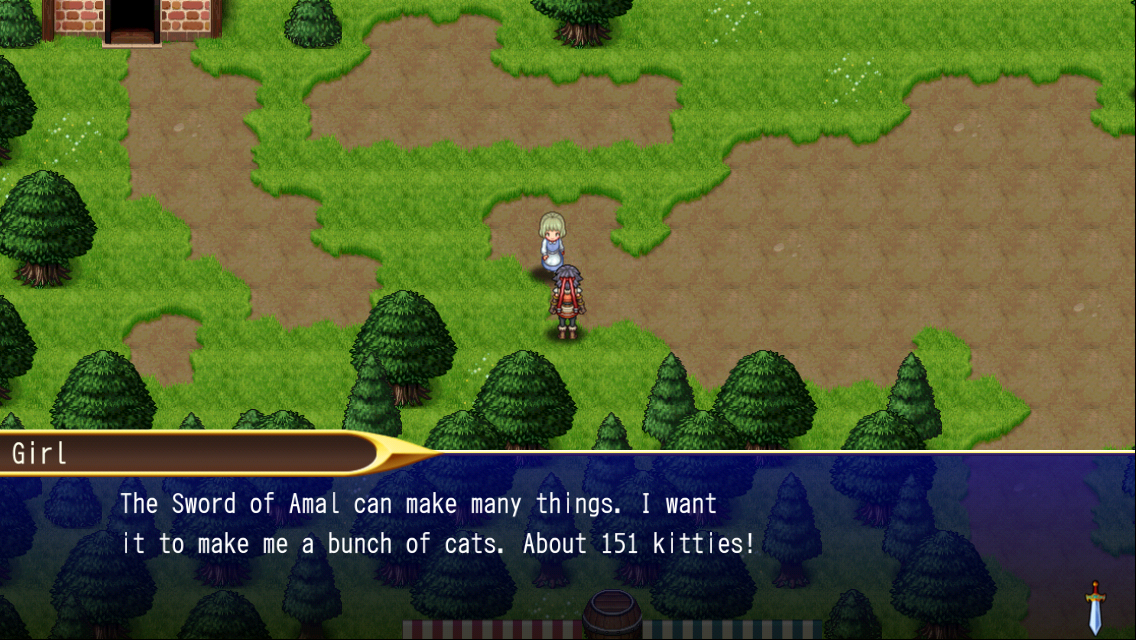 As in Alphadia Genesis, only the battle scenes are presented in 3D graphics. The models look good, especially for the main characters and unique antagonists, but there’s plenty here being reused from the last game in terms of the monster models. Still, this is to be expected, and I imagine they’ll slowly build up their 3D assets over time the way they did with their 2D monsters. The animations are still really stiff and awkward, and this doesn’t feel any less like a pre-Final Fantasy 7 PlayStation RPG than Genesis did. The camera also has to pull back pretty far to fit in all five player characters and the enemies, and the dynamic camera work needs a lot of tweaking. Growing pains, I suppose. Outside of battles, it’s the familiar 2D assets we’ve seen so many times before. They still haven’t solved the choppy scrolling problem, and I imagine at this point that they never will. The music consists of a small handful of tracks, and important scenes are fully voiced in Japanese.

If it seems like this is shorter than my usual dissection of a Kemco RPG, it’s because there’s really not much to talk about with Illusion of L’Phalcia. Narratively, it throws most of its chips in the basket of the contentious relationship between Ryser and Tiana, and when that finally tips over about halfway through the game, it happens so suddenly and completely, you’d half-expect the observing other party members to start singing the theme from Disney’s Beauty and the Beast. In terms of gameplay, there’s little to find here outside of EXE Create’s norm, which is solid enough and sometimes exciting thanks to the occasional difficult battle. The developer shows their usual nonchalance towards Kemco’s insistence on IAP, with points that can be bought with real money or earned by fighting special super-tough monsters on the overworld map. These points can be exchanged for generally boring items like permanent stat boosts and healing items the likes of which you’d never practically need. You’ll find the shop to do this in the status menu, and only there, so you thankfully never have a shopkeeper breaking what passes for immersion here by asking you to take out your real wallet. 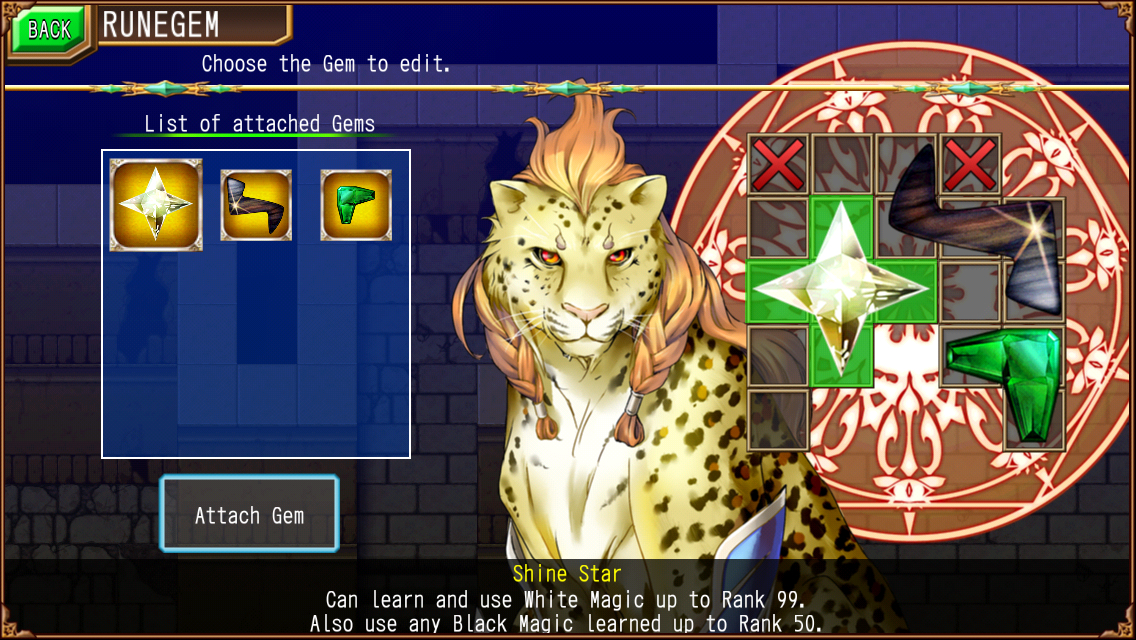