According to a forum post by Blizzard community manager “Zeriyah," upcoming balance changes for Hearthstone: Heroes of Warcraft (Free) will affect the Leeroy Jenkins and Starving Buzzard cards. This update, planned for September 22, will raise Leeroy’s mana cost from 4 to 5. The Starving Buzzard, meanwhile, will have its mana cost raised from 2 to 5, and its stat line raise from 2 health, 1 attack to 3 health, 2 attack.

The changes to Leeroy represent Blizzard’s latest effort to reposition Hearthstone as a game that focuses on interesting minion interactions and careful, considered play instead of high-powered combos. 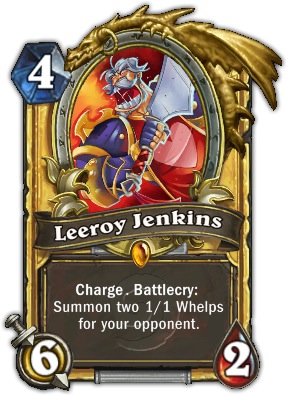 The problem with Leeroy, as explained by Zeriyah, is that he “created a strategy that revolved around trying to defeat your opponent in one turn without requiring any cards on the board." Leeroy’s “Charge" ability, high damage, and cheap cost made him easy to play alongside multiple buffs at the same time.

“Fighting for board control and battles between minions make an overall game of Hearthstone more fun and compelling, but taking 20+ damage in one turn is not particularly fun or interactive," the post continues.

Blizzard made a similar argument when they made changes to the Unleash the Hounds card earlier this year: “Playing minions is one of the key, fun pieces of the overall Hearthstone puzzle, and feeling like your options are limited by the opponent creates a play experience that may not be particularly enjoyable."

The recently released “Curse of Naxxramas" expansion, which introduces new cards heavily focused on “Deathrattle" — events that happen when a creature is killed — was another recent move toward a more tactical, minion-heavy Hearthstone experience. 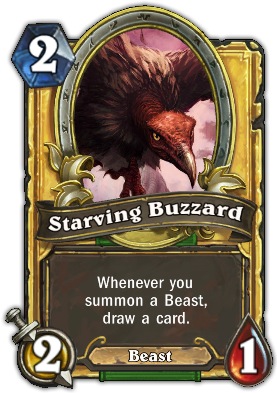 While the changes to Leeroy are straightforward, the Starving Buzzard fix is harder to suss out, with increased stats to (theoretically) compensate for its increased cost. Starving Buzzard is a Hunter-class card that allows players to draw cards every time they use a card designated as a “Beast." Its low cost means that players can combo it with plenty of cheap Beasts and draw an “excessive" amount of cards, according to Blizzard.

“This change will allow the Hunter’s opponent more time to react to both the Starving Buzzard and the cards drawn by its power," explains Zeriyah. On the one hand, Starving Buzzard probably won’t be able to draw as many cards at a time; on the other, its increased health might let it stay in play a turn longer.

These changes will go into effect on September 22, but Blizzard doesn’t plan on rebalancing any other cards until at least after BlizzCon, which takes place in early November. As usual, rebalanced cards can be disenchanted for their full value for a short period after these changes go live.

In other recent “Hearthstone" news, Blizzard is also working on a 100-card expansion, though few solid details are available yet.