Multi-platform Cold War stealth game CounterSpy ($4.99) has snuck into the app store just scant weeks after it was released on it’s other platforms. This is not Sony’s first foray into the wonderful world of iOS. As a port of a game designed for more than one platform, you can expect production value to be quite high. Once you get past the face of this title, however, there are some serious hurdles to clear if you are looking to draw out some enjoyment.

CounterSpy mixes classic side scrolling with a cover system popularized by Gears of War. As you make your way through communist bases and launch sites you gather enemy intel as well as components for upgrades and enhancements that can be used in future missions. You will successfully complete a level if you can get to the last room on the map before raising the alert level by being too conspicuous. There are no set number of levels, just a required number of launch plans which means that burning through a level may not be ideal as each level gets progressively more difficult. 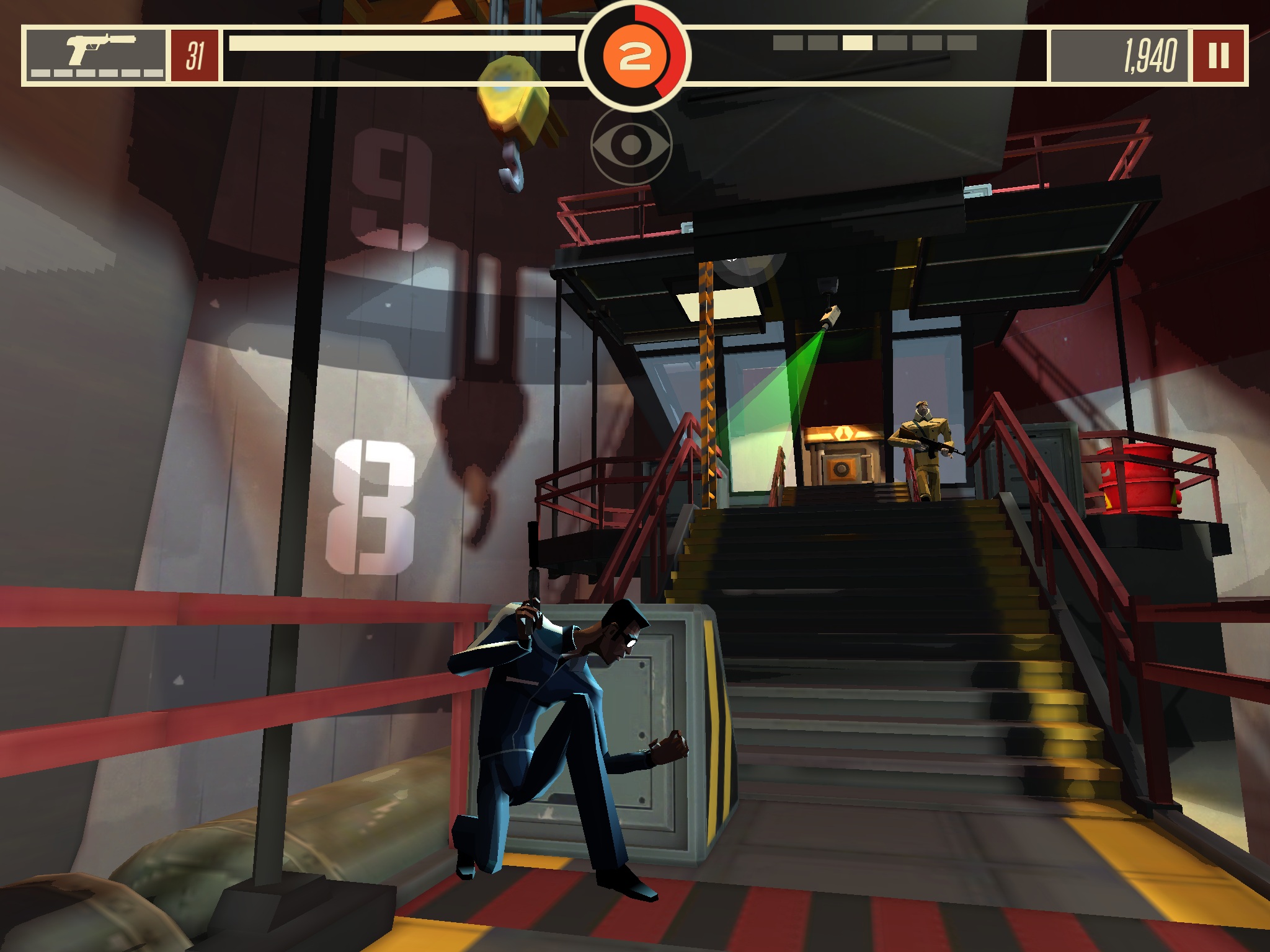 Muscially and visually, the game transports you back to the days of the Iron Curtain. Upon opening the app for the first time I was actually grinning getting a strong vibe of the movie The Incredibles. That same brass and jazz inspired nostalgia flows through the veins of CounterSpy . This theme is powerful enough to overlook a number of issues plaguing the game. One sad bit about the iOS version is that some of the story line text actually makes no sense. As you are basking in the smooth rhythms and sharp artistry, you hear the protagonist state that he could get his kicks stealing from Russians just fine as an American operative. He asks what the point of betraying his country to work for this new agency is. Well for this version of the game, apparently nothing since you only square off against Russia, and not the States like you would on the other platforms.

I’ve seen various reports of imprecise and even possibly buggy controls on our forums. From my own experience, it took quite a bit of time before I was comfortable enough with the game to advance through the first few levels. The command you use to melee attack someone is the same you use to open lockers, blow up vaults, crash computers, and go into cover with. If you happen to be near any of those things, it is a dice roll as to what the hero will do. If you happen to tap near the top of the screen, there is about a 25% chance you might just jump up in the air, alerting anyone on the map of your presence too. Given the time frame of this game’s releases, I don’t think it’s out of the question to suspect that this version was pushed out the door pretty quickly and to a lesser degree of completeness. Controlling firearms is another annoyance. Tapping to aim will frequently result in no action occurring. When you do manage to bring up the aiming reticle, there is no adjustment for where you tapped. The reticle shows up wherever you last aimed making quick drawing a gamble at best unless you reorient your aim before the action heats up. After investing a few hours I was able to progress through levels if I was very careful to avoid pitfalls like ‘oh hey, look a locker and an enemy standing next to each other.’ As long as I avoided tapping too close to the top of the screen and making crucial double tap actions near multiple double tap targets I could make it through most missions just fine. 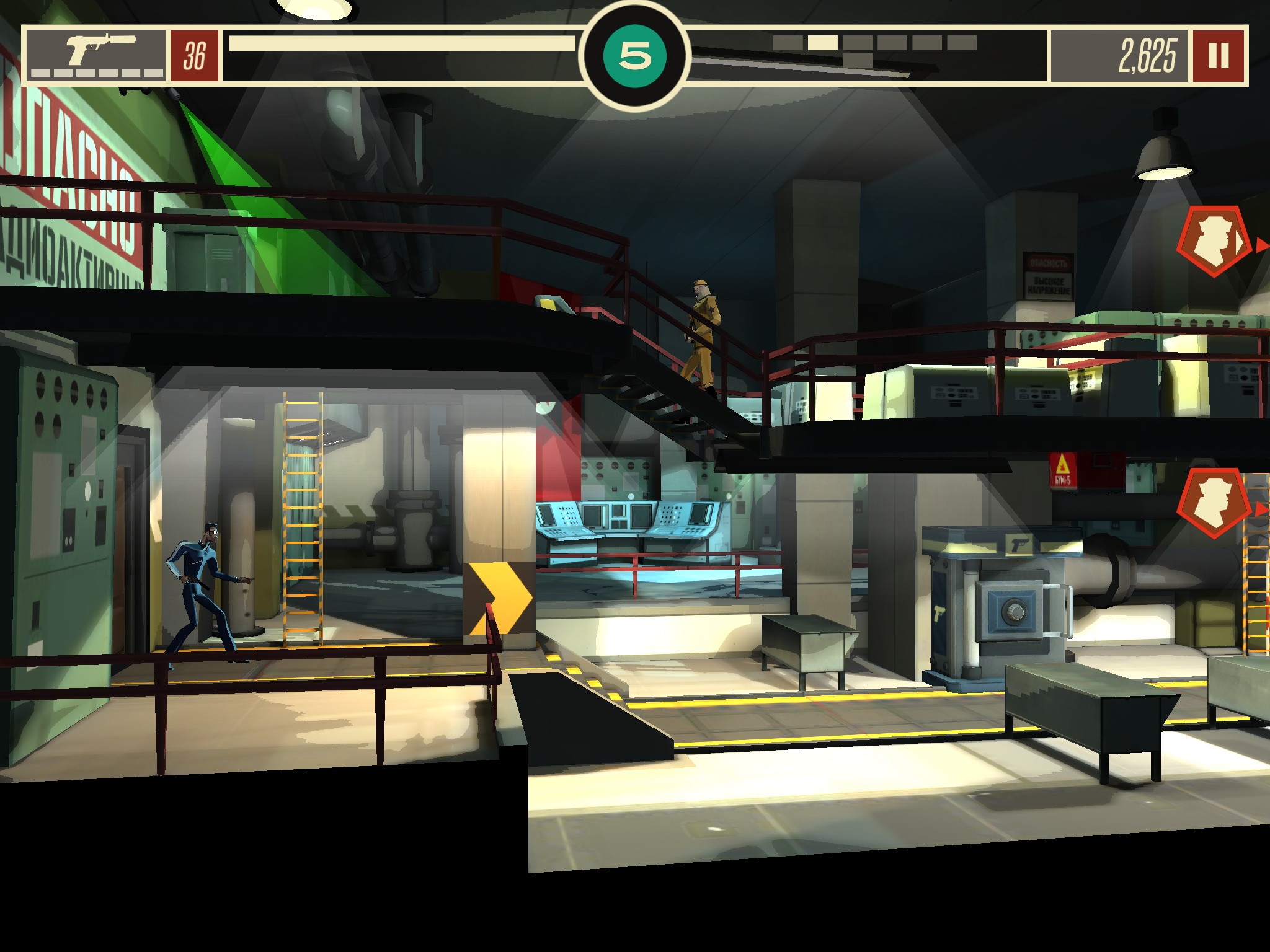 If you happen to have a good deal of patience and luck, you can get through most levels, but the game has no save points between starting a difficulty and ending it. You also carry your mistakes from one level to the next. The sum effect is that it feels a bit like drudgery. Each buggy mis-tap can lead to your eventual demise but you might not know until an hour after the fact. The maps in the game are procedurally generated, which is pointed out as a positive that even playing the same difficulty will never result in the same experience. I can understand that point of view, but I don’t agree that it is as positive as it sounds. I enjoy well constructed levels especially for stealth games that require very precise mechanics in order to feel both realistic and slightly forgiving. I’m not sure if it is the way the levels are generated or how enemies detect stealth, but a single wrong step can sometimes be overlooked and other times alert every enemy on the map. I’m not sure which way is more realistic, but being unable to anticipate the amount of risk that is associated with an action really affected my ability to suspend disbelief.

The iOS version feels like a beta test and I really hope we see some updates soon, because the game could be really good with some control adjustments. Even once I was fully acclimated to the abnormal control scheme, it was just too loose and wonky to really say it is 100% functional in it’s current state. With Sony at the helm, I have to believe that there are resources that could be employed if they were so inclined. I’m not sure I have the secret formula to make a successful multi-platform game but CounterSpy is currently missing some key ingredients.