With pixelated, triangular ships thrusting around an asteroid-studded starfield and issuing forth crunchy 8-bit sounds, the trappings of Astro Duel ($4.99) would allow it to blend seamlessly into any eighties-era arcade. Yet, Astro Duel is timely, for it taps into the quiet renaissance currently unfolding in the mileu of razor-sharp in-person competition waged across a single screen. Whether sitting cheek-by-jowl around a Warlords machine, or in a tangle of controller cables strewn from a console running Bomberman or in front of a desktop PC running the latest indie sensation on Steam (if you’re curious, try out Nidhogg, Samurai Gunn or Crawl), there is a particular intensity to testing your reflexes and tactics against those of your friends with no barriers between you.

Online competition is dandy, but duking it out inches apart via the single device local multiplayer mode raises the stakes and the excitement; a beer or two probably doesn’t hurt, either. Developer Rusty Moyher has set out to bring that type of experience to iPads with Astro Duel, and he succeeds, though the amount of enjoyment you can expect from it is somewhat situationally dependent. One can have a decent time alone (thanks to acceptable computer-controlled opponents), but a live competitor makes for a far better game. Add another two people and a few iPhones running the free Joypad (Free), and you can expect a great time. For best results, mix in a set of MFi controllers, though that’s quite a lot to ask given the current state of the iOS controller market. 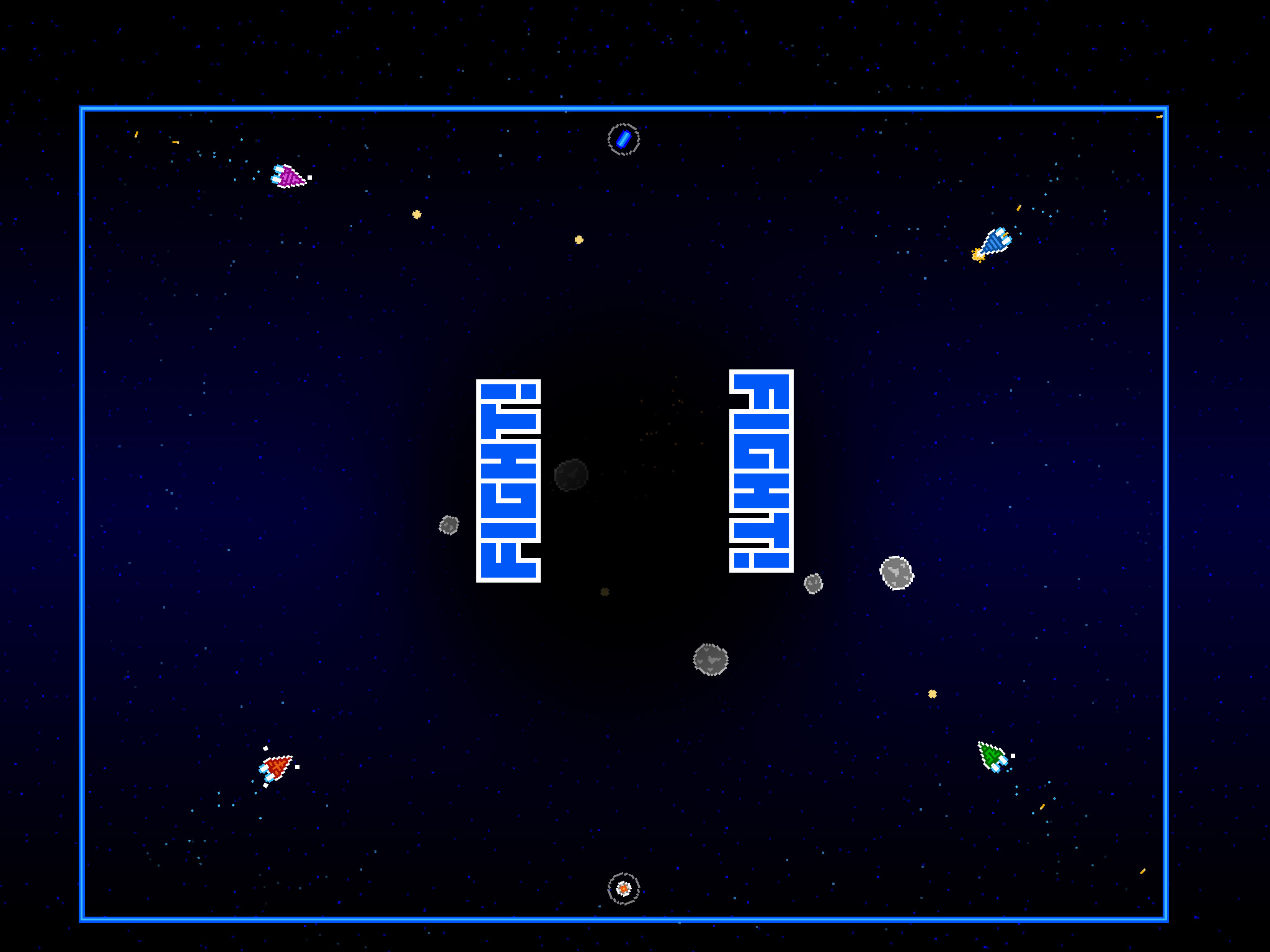 A likely scenario is that you’ll end up with a mix of these input methods in play simultaneously. They all feel reasonably precise, and a degree of finesse will come with practice. Competitive-minded players may perceive a disparity; I’d recommend using it as a handicap of sorts. Regardless of hardware configuration, the inputs consist of five commands, each of which is triggered in a binary fashion: rotate clockwise, rotate counter-clockwise, thrust, fire and use powerup. The basic feel will be immediately intuitive to anyone familiar with Asteroids.

There are indeed asteroids floating around the arenas, though they are not hazards so much as cover from enemy fire and a source of hidden powerups. These powerups offer a variety of offensive and defensive effects, and their specific properties are fun to discover during play. Similarly, each combat arena has a unique layout, and most include a “gimmick" of some sort, like an environmental hazard that can destroy unsuspecting players, or a gravitational anomaly that influences ship and bullet trajectories. 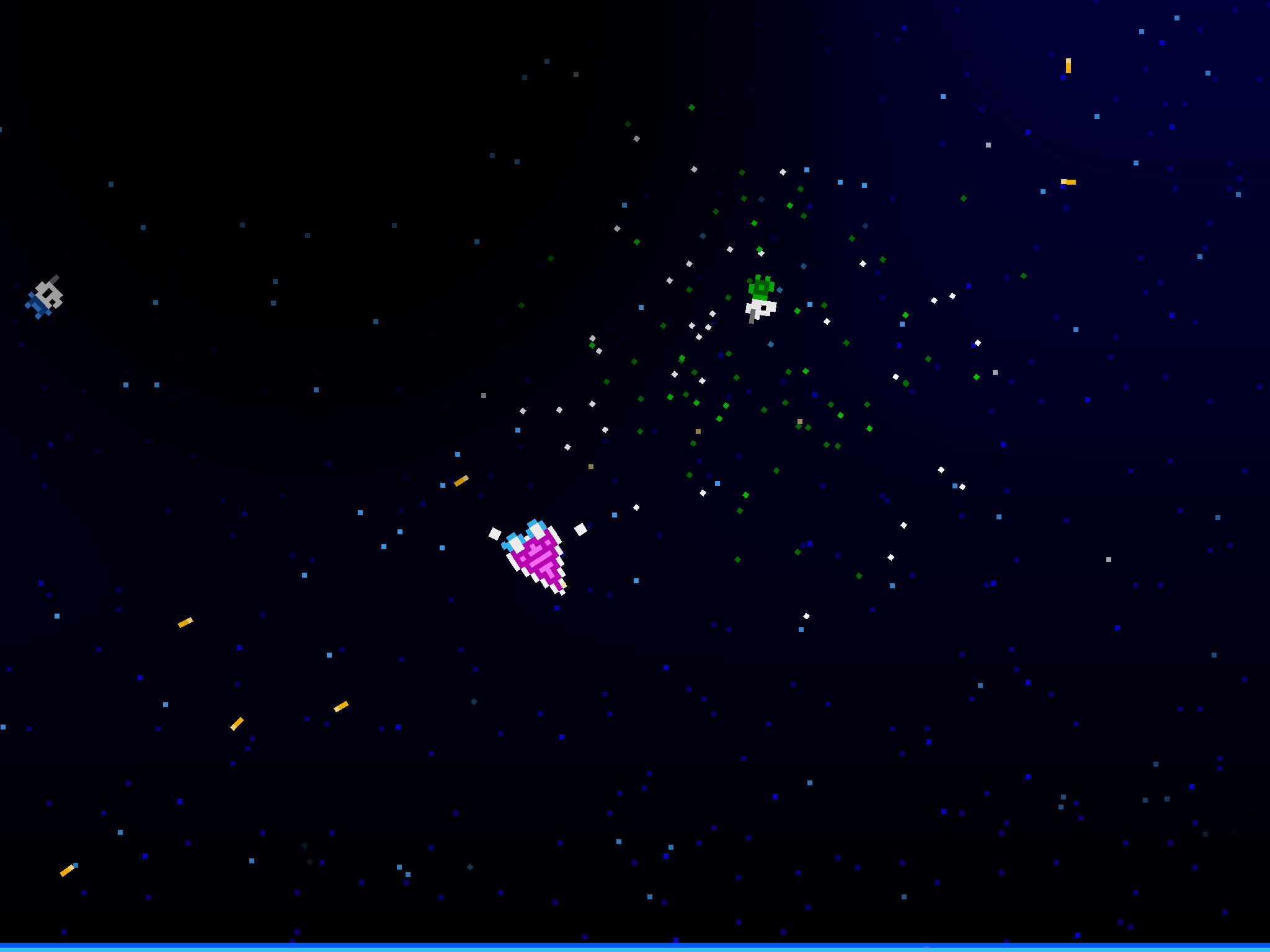 The aforementioned elements add spice to the action, but the core can be distilled down to the maneuvering and shooting. Flying your ship feels good. With only a little practice, you’ll find yourself drifting around the screen, trying to line up shots while slipping sideways through enemy fire. Shooting may seem obvious, but it’s implemented in a well-considered fashion here. Similar to a few of Astro Duel’s contemporaries on other platforms, it is not possible to shoot continuously. At the outset of a round, each player has three shots to fire, and they take a moment to recharge when spent. This system encourages players to pick their shots carefully and to develop a sense of when their weapons will be able to fire again (the status of which is helpfully represented on screen). It seems as if a lot of time must have been spent tuning these aspects of the game, because they simply feel right.

These fundamentals and the complications afforded by the powerups and stages cohere into a tense series of standoffs, punctuated by chaotic outbursts, deft play and blundering suicides. These moments emerge in three modes with different objectives: stay alive; kill the most; survive as a team. Various options are available to tailor the match rules, which is always a welcome feature in a game of this sort. With the right people and mix of devices, a raucous time is in the offing, full of last-second upsets and opportunities for gloating. Every aspect of Astro Duel contributes to achieving its specific ambitions; it is a product of singularly focused design.