For the most part, Regular Show games tend to fit the videogame mold far better than its Adventure Time brethren. Videogames are heavily cemented in the show itself, and there’s hardly a season that passes by when stars Mordecai and Rigby veg out on the couch and game for hours on end. This time around the gang finds themselves in a tower defense-like situation, sparked by rival park manager Gene and The Great Prank War ($2.99).

If you’ve seen the show, you have some idea of what to expect from the out-there story. The titular “Regular" characters have engaged in a life-long prank war with another park, leading to some pretty insane scenarios that far exceed your typical prank.  The game takes place over multiple “seasons," which essentially function like worlds from a Mario game. Each season houses four stages each, all of which have a distinctive theme, as well as new enemy types. For instance, the winter wonderland stages will have robotic Santa Claus robots, and so on.

For the most part though, gameplay is relatively the same throughout. You start off as a mix of Mordecai and Rigby in one character, with the power to switch between them at will — which allows you to take advantage of their separate health bars and certain set of skills. Mordecai tends to run faster and attack from afar, and Rigby is more of a slow, but strong melee type. To get somewhere, you’ll tap the screen. To attack an enemy, you’ll tap that enemy. To use a power…well, you get it.

Everything is dead simple in terms of play control, which makes it very easy to pick up and play as you attempt to beat down (and rebuild) the towers that dot the path and the enemies that spawn from the home base at the end of the road. Defeat said base and each map is conquered. 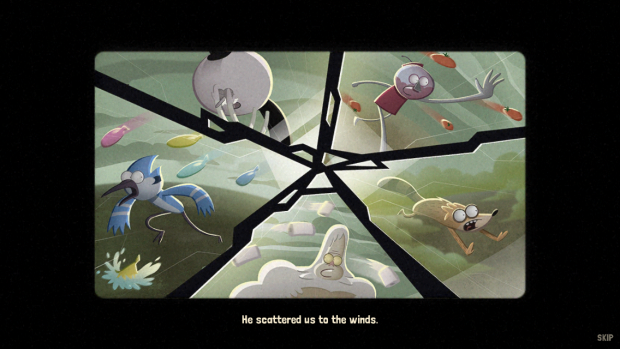 It’s not rocket science in terms of tactical depth, but it’s very fun to switch between the two depending on the situation, blasting towers from afar and then switching to Rigby to deliver the finishing blow. As you eliminate enemies your character will “level-up," granting them access to two special powers that run on a timer. Again, each character has their own skills, so it’s enjoyable to switch back and forth, especially when you start unlocking more of the cast.

Something you should know upfront about The Great Prank War is that it’s extremely short — no, really, as in, the game is over in a scant few hours. We’ve become so accustomed to rediculously low prices on the App Store with games like endless runners that attempt to warrant IAP purchases, but with Prank War you know you’re getting the entire package from start to finish. 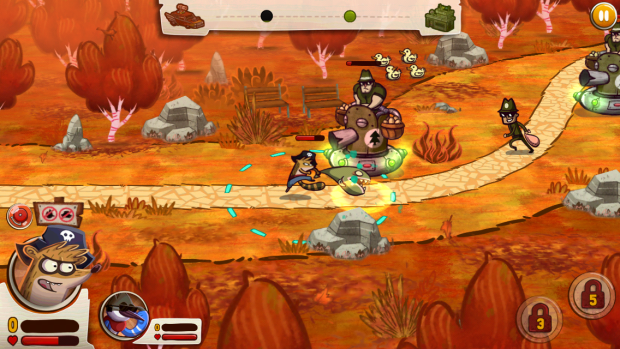 As long as you don’t mind a short experience, The Great Prank War is consistently fun from start to finish. It may be more action than tower defense, but that doesn’t change the fact that beating up on deadly parodies of Chuck E. Cheese’s robots is enjoyable for a few hours.