I don’t think I’m alone in feeling a bit disappointed by the way Kairosoft’s been spinning their wheels with most of their releases. It’s not that the games aren’t fun individually, it’s just that they provide such similar experiences that it’s hard to get all that interested in another one if you’ve already played more than a few. So it was with a slightly weary sigh that I downloaded their latest game, Kairobotica ($4.99), expecting another Pocket Harvest ($4.99) -level rehash and little more. Much to my surprise, this is Kairosoft’s most innovative new game in quite some time. That might sound like faint praise, but with the change-up in mechanics, the developer’s strengths shine through brighter than they have in a while. The result is a game that may not please everyone, but should at least be a welcome sight to exhausted fans of any of the developer’s prior games.

In Kairobotica, you’re in control of a mobile colony of galaxy defenders. While there are strong sim building elements that will be familiar to players of previous Kairosoft games, your building space is far more limited in this game, and the focus is new. Everything is in service to building as many Kairobots as you can. While you will be doing some building, the most important parts of the game are the combat scenes, where you march your force into a series of battles. As enemies attack you, some of your number will be picked off, but they’re easily replaced back at the home base. The key thing is for your current group to survive to the end of the stage. Winning battles earns experience points that apply to every bot you build, so each individual is totally disposable. The ultimate goal of the game is to defeat the evil master of the Wairobots within a certain period of time. 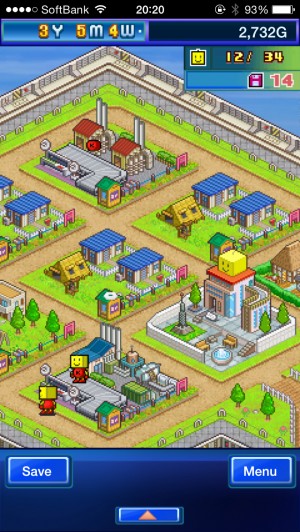 To do this, you have to travel from planet to planet, solving their problems, amassing experience points and items you can use to create special Kairobots, and meeting people who might show you the way to the next planet. You’ll earn money that you can use to improve your colony, and research points that can be used as usual for research but also to activate special moves in the RPG-style combat system. While you’re on each planet, the residents can come to visit your colony, spending money on various attractions you can set up. As they gain culture, they’ll evolve, unlocking new items and so on. In addition to the planetary missions, there are separate side missions that will often have you traveling from planet to planet.

Since the game focuses on building deep rather than wide, even the familiar elements of the game have a new feeling to them. Traveling to different worlds, meeting new enemies, and unlocking new special Kairobots to bring with you all help keep things fresh. Now, since this is a Kairosoft game, it’s not really all that challenging. You can more or less look forward to the usual inevitable victory simply by playing, but even that doesn’t do much to ruin things, since the game is far less concerned with keeping a balanced budget and more with achieving that ultimate goal of beating the big bad. As in other Kairosoft games, even if you don’t win within the time limit, you can still keep playing after, though it will no longer count towards your point totals. 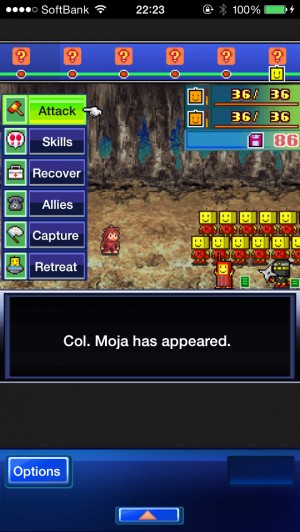 Although there are plenty of familiar graphical elements and the sound is virtually indistinguishable from earlier titles, there’s actually a fair bit of new sprite work in Kairobotica. There are lots of enemies we haven’t seen before, and the special Kairobots themselves are, I think, all new, and sometimes hilarious. I especially loved that the so-called Devil Kairobot is a bat-winged thief wearing a business suit. There seems to be a good bit more animation than usual in general here, which helps the game avoid feeling too static. While it’s nothing technically special, I really enjoyed seeing the huge lineups of Kairobots battling the sometimes equally huge lineups of enemies in the battle scenes. Part of the fun of boosting the size of your bot army is in watching the number of sprites in battle grow. The special moves often come complete with their own cool animations, and the game thankfully gives you enough research points that you can use them liberally.

There’s not much more to say about Kairobotica, but it certainly shows how even a little effort to mix things up can yield dividends for Kairosoft. Playing this game brought back a lot of the fun from Game Dev Story ($4.99), Mega Mall Story ($4.99), and Dungeon Village ($4.99), reminding me why I fell in love with this developer in the first place. I have no doubts that we’ll be back to business as usual before too long, but in the meantime, if you’ve been waiting for Kairosoft to try something different, you’ll definitely want to check out Kairobotica. Of course, if you’ve been hooked on their games all along, you’ll also want to check this game out, because even while it tries something a little different from the ordinary, it’s not missing even an ounce of their usual charm.