You really have to hand it to The King of Fighters series. Not only has it survived through 20 years and more than one company sale, it’s actually seen fairly regular releases throughout that span, proving to be just as prolific, if not more so, than its more well-known competitors. It also has long roots on handhelds, with semi-regular handheld versions dating all the way back to the second installment, King of Fighters ’95. I feel like the series has never quite gotten its due from the general public, but it enjoys a strong reputation among fighting game fans, and The King of Fighters ’98 ($2.99) is arguably the best of the bunch.

The King of Fighters ’98 represents the first “Dream Match" installment of the series, where the story is set aside so that old and new characters can appear alongside each other, even if they’re dead or it doesn’t fit the plot. As such, with a few notable exceptions, this game has every character from King of Fighters ’94 through King of Fighters ’97 ($2.99), rounding out the roster to an impressive 38 characters. If that’s not enough for you, nine of the characters even have alternate versions that reflect an earlier incarnation. What makes that number of characters even more impressive is how well-balanced the game is. While some characters, like Iori or Kyo, definitely outshine others, such as Andy or Billy, the gap between the best and the worst is smaller than just about any other fighting game with such a large list of playables. 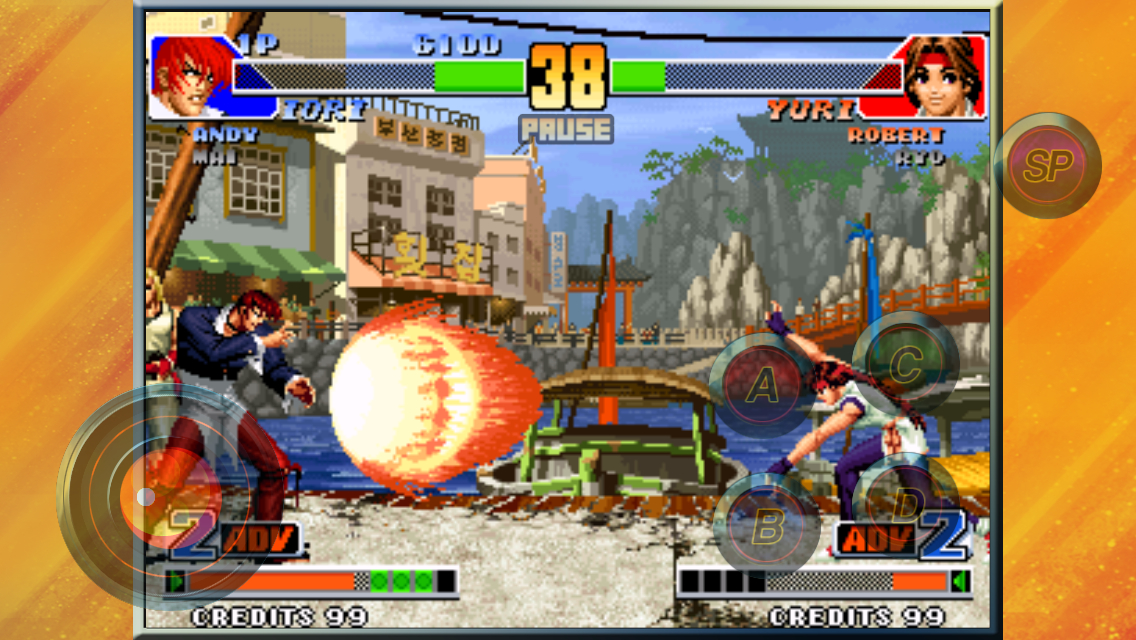 As usual for the series, you pick a team of three characters and fight it out against other teams of three. This installment was from the era where you couldn’t tag in and out freely, instead choosing the order in which your fighters will appear. If you finish off your opponent, your character’s health will get restored a little and the next fresh opponent will face you in the next round. Eliminate the whole opposing team and you win. KOF ’98 carries forward the Advanced and Extra modes from KOF ’97, offering different styles of building and using your super meter. Aside from the roster changes and balancing, the gameplay isn’t much different from the previous year’s version, but that’s pretty typical for a fighting game sequel. There’s no story, and the boss this time around is Omega Rugal, an SNK boss if there ever was one.

Like other classic SNK games on iOS, DotEmu has handled the chores here, and they’ve done their usual sensational job. Everything looks and sounds perfect, with intelligent touch controls added to make menus and character selection easier to navigate. A training mode has been added so that you can practice your moves against a CPU dummy with unlimited life. If you have a friend in the vicinity who also owns the game, you can slug it out via Bluetooth in the game’s multiplayer mode. The virtual controls used in the actual fighting are very similar to other recent DotEmu SNK ports. There’s a virtual stick and your choice of four or six buttons, with the extra two in the six-button layout acting as combined presses. You can also choose to use an extra button called the SP button, which allows you to easily bust out special moves when pressed in conjunction with any direction. You can rearrange the buttons and tweak the sizes in the options menu, and the nicest thing I can say is that they work about as well as any virtual controls are going to for this game. 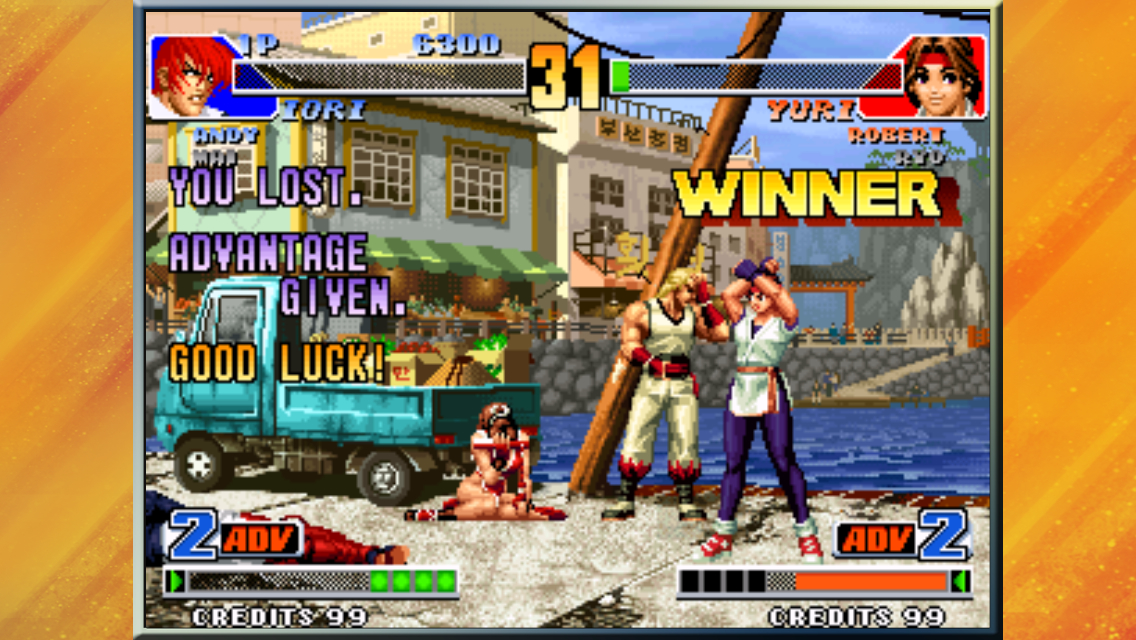 If you have an MFi controller, you can probably skip this next paragraph and add another full star to the score at the bottom of the review. For those of you stuck with touch only, the controls are as good as they can be, but they’re not really good enough. Compared to, say, the various Street Fighter games as a baseline, the KOF games involve considerably more difficult commands for their specials and especially super attacks. The SP button alleviates this issue somewhat, but it’s a bit awkward to use in combo situations. If you’re up against another human player suffering a similar handicap, it’s not so bad, but against the computer, you’re buying a one-way ticket to Pain City. The computer AI is already stacked against you in a variety of unpleasant ways. Adding control issues to that only makes it worse. I couldn’t beat Omega Rugal using the virtual controls, and I’m no slouch with virtual controls or King of Fighters.

In happier news, MFi controllers work great. Everything plays exactly the way it should, and with DotEmu’s fine emulation in tow, this might actually be the best home version of King of Fighters ’98 you can get. That would also make it one of the best multiplayer fighting games available on iOS, so if you’re planning on playing with friends in the same room as you, dive in. You’ll have a great time getting to know this crazy cast of characters and finding which team works best for you. If you’re only in it for single player, it’s a tougher call. Since there’s no story in this game, the endings only differ in terms of the final card displayed. If you’re using a preset team, you’ll get a cute custom piece of art from one of a variety of artists, while if you’re using a team the game didn’t anticipate, you’ll get the same cast picture every time. There are lots of interesting animations to see, especially in the prefight introductions, but I’m not sure if that’s enough to recommend it to solo players. 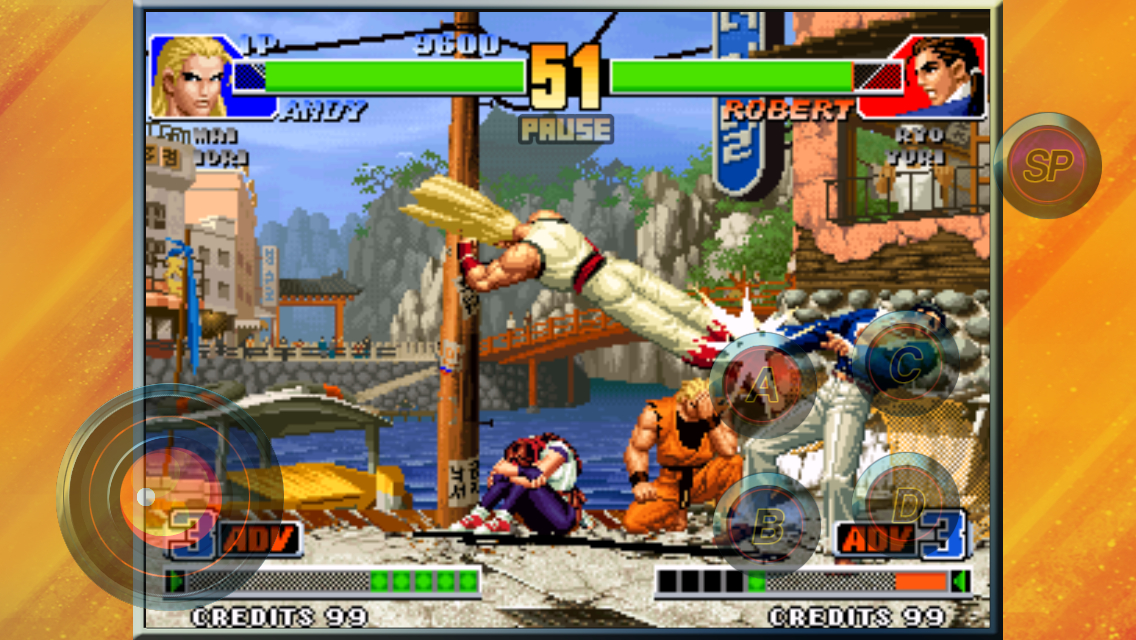 King of Fighters ’98 is a dream version of one of the best games in the entire series, and apart from adding support for Internet play, it’s hard to imagine anything DotEmu could have done better with it. Some games are just never going to be at their best with touch controls, however, and this is definitely one of them. If you have an MFi controller or, at the very least, a friend suffering the same handicap, this is an amazing fighting game, but if you’re lacking both of those, you’ll probably want to give King of Fighters ’98 a pass. This has never been the strongest single-player KOF, so I’m not sure it’s worth suffering the finicky controls if you’re only going to play against that vile, cheating CPU.