Compared to other popular licensed characters, the Ninja Turtles have had it pretty good in the video game industry. Their first game from Konami is well-remembered if not necessarily loved, though at the very least it taught many an elementary school kid that turtles can’t breathe underwater. After that slight misfire, it didn’t take long for Konami to put the TMNT into a few of the most beloved belt-scrolling beat-em-ups of all-time, along with a couple of less-successful one-on-one fighters. After their initial popularity waned and the license left Konami, the Ninja Turtles have had a handful of decent, if not spectacular, outings based on their various revivals, most recently seen on iOS in TMNT: Rooftop Run ($3.99). Sure, their star may have faded over the years, but they headlined two games that are still considered among the best in their genre, something you can’t say for those smug Power Rangers.

There were a lot of high-quality licensed games in that period of gaming’s history, and one of the secrets behind that is that the companies producing those games actually put strong talent behind them and gave them the resources to succeed. The industry moved away from that for a long time, but it seems to be coming back around of late, with Nickelodeon’s latest iOS game, Teenage Mutant Ninja Turtles ($2.99), proving a fine example. No disrespect to Rooftop Run, because it was very fun for what it was, but I think most people want to see the turtles fighting, not running. If you’re looking to make a mobile game based around fighting, Combo Crew (Free) creators The Game Bakers are probably one of the first teams you should be calling up. Luckily for us, that’s just what Nickelodeon did, resulting in a far better game than one might have imagined from a summer movie license.

As usual, the brothers are up against the Foot Clan of ninjas and a bunch of other mutants, with the story of the game revolving around a plot to take over all of the city’s pizza restaurants for reasons. The Turtles obviously aren’t going to stand for that, so you’ve got to take them through 35 stages of beat-em-up action. Like Combo Crew, this is an arena-based beat-em-up, so don’t expect to be walking through any stages. The enemies come in waves, and you have to clear them all out to move on to the next stage. On the way, you’ll face three bosses who should all be quite familiar to fans of the classic Saturday morning cartoon. It should also be mentioned that this is a single-player affair, but you can choose your favorite turtle to fight as, with the remaining brothers jumping in for super moves.

The action very closely resembles that of Combo Crew, with some minor changes to the controls to simplify things. You have no direct control over your turtle, instead directing him towards enemies using swipes and taps. Tapping on an enemy will unleash a basic attack, while swiping in various directions across the enemy will unleash one of your set combos. You can counter an enemy’s attack by tapping anywhere on the screen when they have a lightning symbol above their head, and if you rack up a big enough combo without getting hit, you can unleash a super move that calls in one or more of your brothers. The charge attack returns, but is no longer a default move. Each of the turtles starts with at least one combo that can break an enemy’s guard, as well as a launcher and a ground attack. 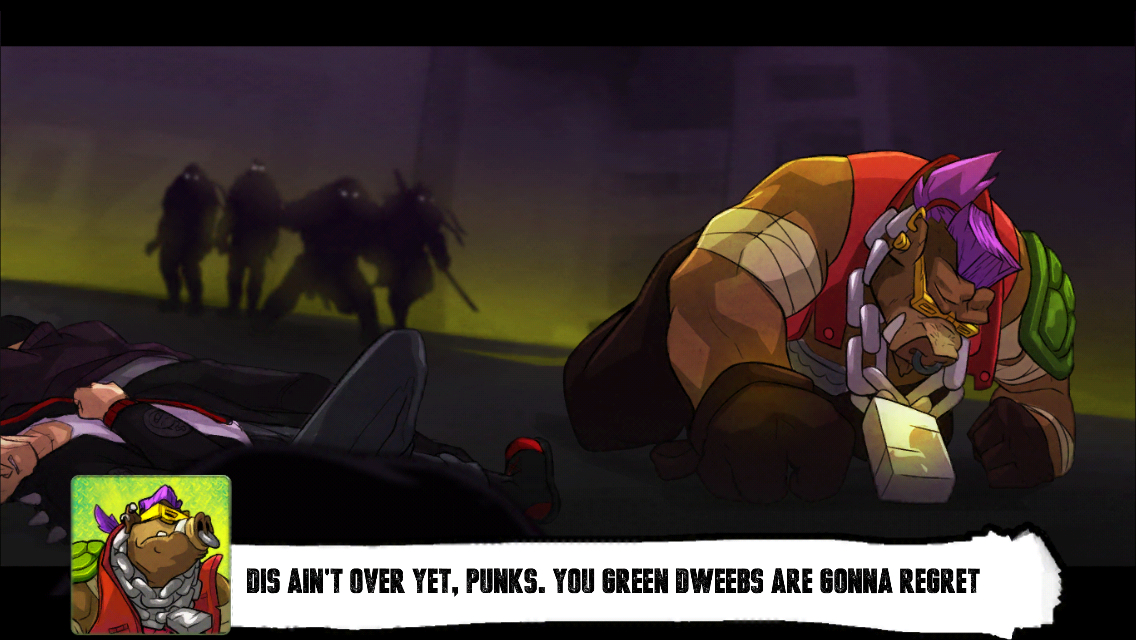 I’m pretty happy with these refined controls. It makes a lot of sense to have basic attacks come out from a simple tap, and getting rid of two-fingered swipes is always a good thing in my books. The only part of the controls I had any issues with involved the super move. Specifically, for Leonardo’s part of the move, you have to swipe a number of arrows a bit too precisely. It’s not a big issue when there are only three or four arrows to swipe, but when there are five arrows, the window of time is a bit too short and the accuracy required is a little too high. Sadly, if you flub any part of of the super move, it stops right there. Building up the gauge to summon all of the turtles is tricky enough, and not getting to see every character come out because I screwed up Leonardo’s part yet again is disappointing.

As in Combo Crew, you can upgrade each character using the currency you earn by playing. Teenage Mutant Ninja Turtles has two different currencies. Coins are earned by completing stages and can be spent on one-time boosts and training that permanently increases your stats. Gems are earned by getting three stars on a stage or by clearing special goals. They’re used to buy new combos and weapons. Both currencies flow fairly well, at least enough to fully deck out one of the turtles as you make your way through the game, but the gems are just stingy enough that you can’t really spread the love around among the four. You can naturally buy both currencies via IAP, as well as full unlocks for all of the things you would normally spend those currencies on. Granted, you don’t have to max out every turtle to play through the game, but it feels like bad form for a relatively premium-priced game to set up its economy this way. It’s easily the biggest negative point of this game, and while I don’t like to play Nostradamus, it makes it feel like the game is built to go free at some point. 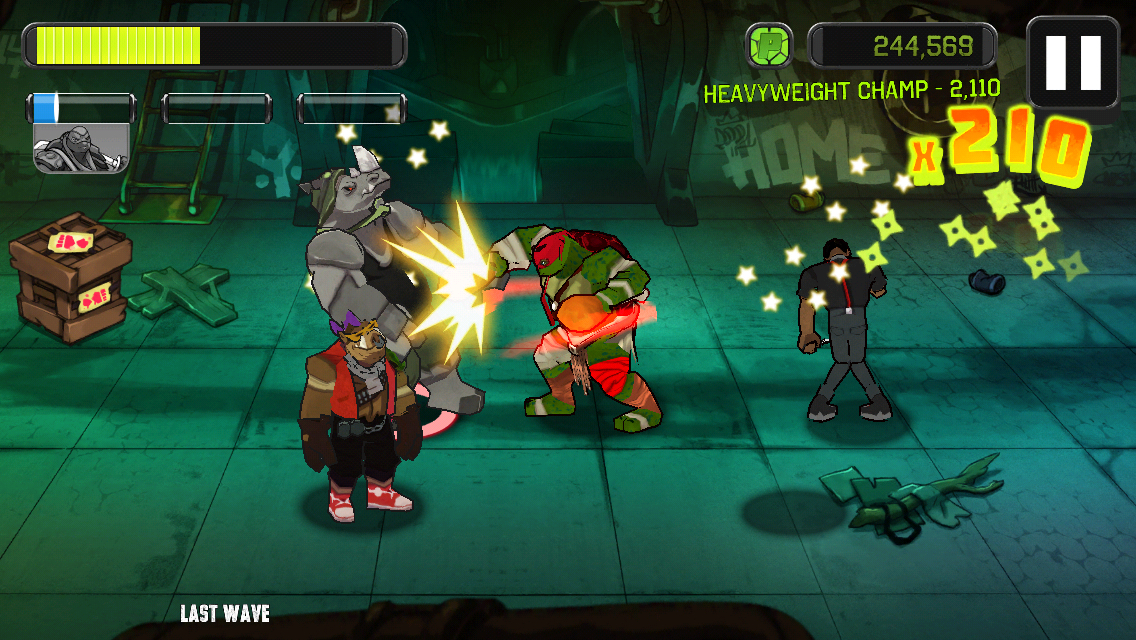 The graphics and sound are both excellent, a clear step up from Combo Crew. Of course, since this is based on the new Michael Bay movie, we’re stuck with the unique character designs from the movie, which I can take or leave. I would absolutely love to see other versions of the characters come to the game at some point as downloadable content, but I won’t hold my breath on that one. The game has a really strong cel-shaded look to it, and the animations are superb, as you would expect from this developer. Oddly, the game sometimes suffers from heavy graphical stutters on my iPhone 5S unless I manually shut down a bunch of other apps. The characters are all voiced, though of the movie’s cast, only Splinter joins. The rest of the cast is made up of veteran voice actors with no previous TMNT connections, save one special treat: Cam Clarke reprising the role of Leonardo from the 1987 series. My only complaint about the voice acting is that Splinter talks way too frequently during fights. He repeats himself a lot, and I wish there was an option to turn him off. I love that they managed to sneak a bit of the classic theme into the music, though.

In addition to the game’s relatively brief story mode, there’s also a survival mode where you have to clear multiple stages with just one life bar. There are gems to be earned here, and coins flow just the same as they do in the story mode, so this is a nice place to practice and power-up your character if you get stuck in the main game. The story mode gets pretty tough near the end, with enemies completely shredding your lifebar if they hit you, so you really need to get the hang of the game’s rhythm if you want to see it through. There are several different enemy types with their own behaviors who will come at you in mixed groups, so you also need to learn their various tricks if you want to make it through. If you get into the game’s flow, or already understand it thanks to Combo Crew, you can finish the game off in a couple of hours or less. Still, there are plenty of extra goals and achievements to work towards after that, and trying to rack up higher combos and scores never loses its appeal. 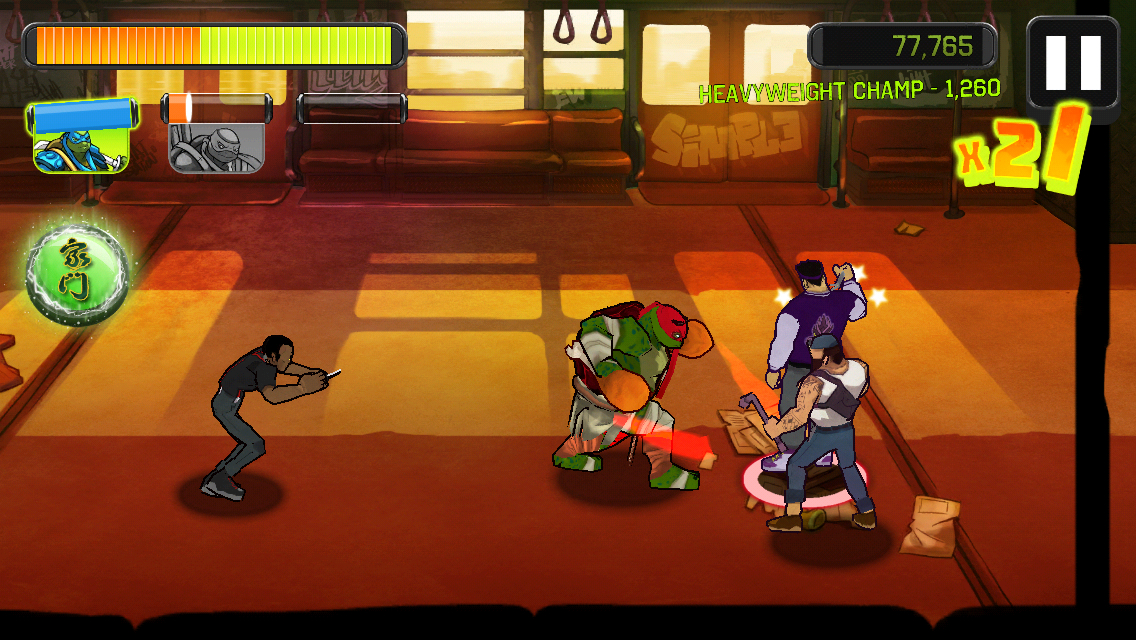 Taken as its own thing, Teenage Mutant Ninja Turtles is a pretty cool game that fans of the characters should enjoy. The combat is fun, the upgrades flow frequently, and it has just the right amount of fanservice and humor a TMNT game should. The premium currency and IAP make me very suspicious about this game’s future, but I think a Ninja Turtles fan will get their money’s worth out of this even at the current price. Looked at as a follow-up to Combo Crew, I love the way the controls have been simplified without sacrificing depth, and the game looks fantastic. If you really got into the fighting system in that game like I did, you’ll definitely want to take a look at this game. It’s another strong licensed effort for the Ninja Turtles, even if it probably won’t be one for the history books.