I hope no one takes this the wrong way, but Traps n’ Gemstones ($4.99) isn’t exactly the kind of game I’ve come to expect from prolific mobile developers Donut Games. Don’t get me wrong, their games have a very consistent quality to them, and like their namesake, there isn’t really a bad one in the bunch. Still, in the past, they’ve tended to put together highly-focused gameplay experiences, often building a game around mastery of a single concept, whether it be cutting grass, flinging monkeys, or batting a ball between cats. Short little score-attack affairs, for the most part, have been the bread and butter of Donut Games, and they’ve found a lot of success with that type of game.

By contrast, Traps n’ Gemstones is a considerably more meaty experience with clear appeal towards more traditional gamers than they typically target. It’s a side-scrolling action platformer with a heavy emphasis on exploration in an interconnected world, similar to Nintendo’s classic Metroid. You play as a somewhat familiar explorer who descends into a pyramid looking for lost treasure. A bad guy has tied up the locals and taken all of the relics from their pedestals, throwing the whole place out of whack. You have to free the locals, find all the relics, and open up the path to the ending. In typical fashion for this genre, you will frequently run into places where you can’t proceed without first finding an item or ability elsewhere. As an added bonus, there are a number of non-essential extra treasures called symbols that you can collect to boost your score and your completion percentage. 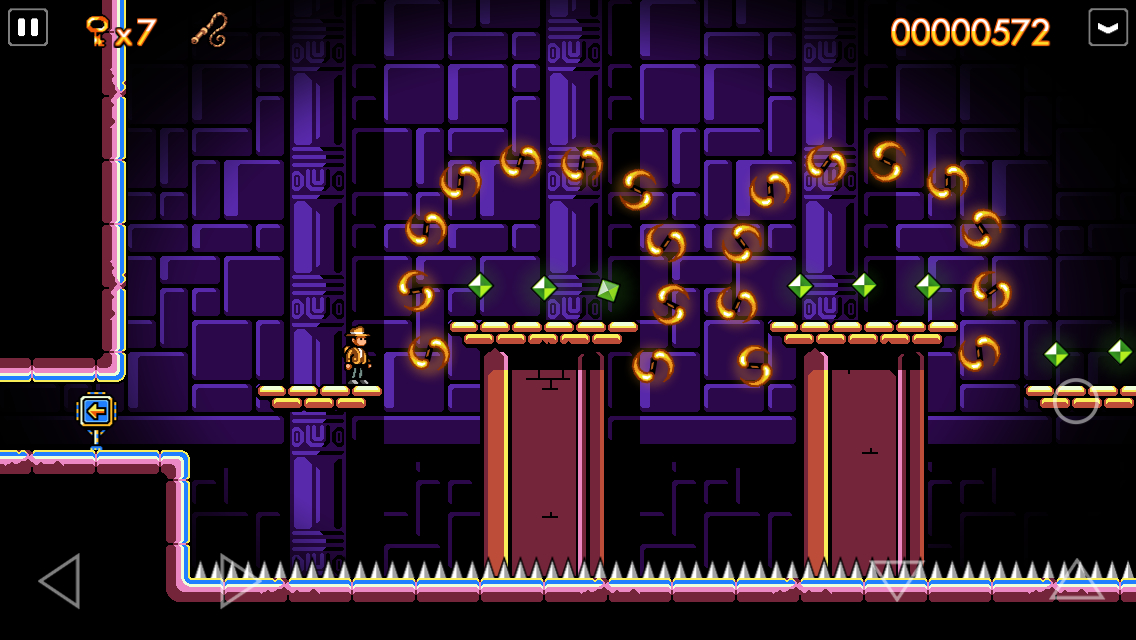 The adventure unfolds on a fairly large map full of secret passages and shortcuts for you to uncover. While I compared the game to Metroid in the last section, the game’s map is closer to Metroid II, with a tall central column from which several spokes diverge. You’ll be making your way back to that center area more than a few times, but smart design cuts down on the number of trips you need to take. If you happen to get lost or can’t figure out where to go next, the pause menu has a mini-map that puts little dots on current rooms of interest. Of course, it’s not just as simple as taking a stroll, as the rooms are stocked full of traps and light puzzles. Your character can only take a single hit, but death simply restarts the room, with the modest penalty of resetting your score to zero.

In the start, your character can only jump and roll, leaving him defenseless against the many creatures that fill the pyramid, but pretty soon after, you’ll get a whip and a pistol, items that for some reason go really well with that fedora and leather jacket he’s wearing. While you’ll collect several items on your journey, most of them are used automatically or by tapping a context-sensitive pop-up, leaving the virtual controls relatively clean and uncluttered. Thanks to the generous checkpoint system and the friendly map, it’s actually pretty easy to make your way through to the end of the game, such as it is, but it does take a couple of hours. It’s a respectable length for a game of this genre, even if the main adventure does lack teeth for the most part. 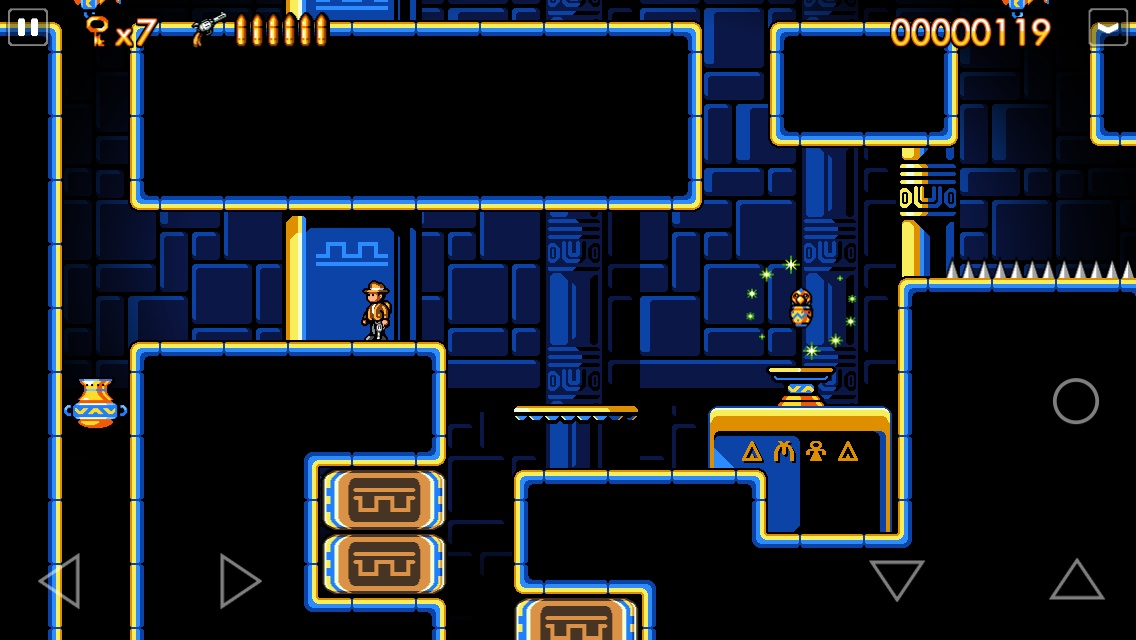 Luckily for experienced players, there are a couple of higher challenges to the game. While getting to the end of the game is fairly simple, collecting all of the symbols and finding all of the secret rooms takes a bit more skill and patience. Since dying resets your score, there’s also the additional challenge of trying to boost your score as high as possible to compete with your friends or on the Game Center leaderboards. Better still, while dying also replaces any of the gems and coins you’ve picked up, it does not replace any collected symbols, meaning that if you want to completely maximize your score, you have to collect everything without dying even once, all the way from the start. I think that will prove a pretty serious challenge for even the best players, because it’s really easy to forget about one stupid thing or another as you work your way through.

The map design is excellent, with layouts that keep you hopping, rolling, and attacking your way through platforms, enemies, and traps. This goes a long way towards keeping things enjoyable even as you backtrack across territory you’ve previously traversed. The various traps and gimmicks are surprisingly varied, with some making just a single appearance. Virtually all of the Indiana Jones cliches show up at one point or another, and I had a great time with the sections where you blast from cannon to cannon in the style of Donkey Kong Country. If you pay close attention, you can see a very careful design at work here, with new mechanics introduced in a non-lethal environment, allowing you to get a feel for them before the heat gets turned on. Sensibly-placed shortcuts serve to reduce some of the backtracking, while simultaneously giving you a few fun moments of realization as you find yourself somewhere you saw before, but couldn’t reach. The pyramid is just a fun place to explore and run around in, something that is absolutely critical for this type of game.

It’s all wrapped up with the usual workman-like polish Donut Games always brings to the table. The visuals aren’t stunning, but everything is nicely detailed, with important gameplay elements standing out well against the sometimes dark backgrounds. The somewhat small size of the main character’s sprite allows for a better viewing area around him, something that is very important for this type of game since it reduces the chance of an unfair “gotcha". The sounds are almost exactly what you would expect from the setting and theme, but they do the job well enough, with the effects that play when you pick up gems and coins having an almost infectious quality. The menu and UI are intuitive and simple, though I do wish the virtual button layout could be customized a little, since I frequently hit the roll button when I meant to attack, thanks to old habits. There isn’t a single piece of IAP to be found, either, so what you see is what you get.

Traps n’ Gemstones could probably benefit from a little more flash and razzle-dazzle, and a few bosses wouldn’t hurt, but I’m not going to gripe too much when what’s here is as good as it is. The game has something to offer players across a variety of skill levels, and its numerous secrets, method of scorekeeping, and the fact that it keeps track of time played makes it ripe for replays, score attacks, and speedruns. Moreover, its superb design ensures that all of those activities will prove to be enjoyable. This game sort of shattered my expectations of Donut Games, and if you give it a go, I think you’ll agree they’re onto something great here.