Mini-game collections, or as they’re sometimes known, party games, serve an important if somewhat niche role in gaming. It’s safe to say that for most longtime gamers, party games aren’t something we’re going to be playing terribly often, yet on those rare occasions when you do need one, you really need one, so I suspect most of us keep at least one or two in the standing collection. Gather together four gamers for a party and the sky’s the limit for mulitplayer, but if you’ve got someone in the room who isn’t quite so familiar with games, the somewhat shallow and easy-to-learn nature of mini-games is probably the best route to avoid them giving up in frustration. So, like that dusty old Scrabble board you keep in the top shelf of your closet, it’s useful to keep a good mini-game collection around for those special occasions.

Mucho Party (Free) would like to be that game for your mobile device. Offering up 31 different mini-games that two players at a time can play locally on one device in several modes of play, including one that supports up to eight people, it certainly packs the content you would expect from a full-featured mini-game collection. The games cover quite a variety of activities that ask different things from the players, and everything is very polished. This doesn’t feel like an amateur production in the least, which is important considering the price is perhaps a bit higher than you might expect. 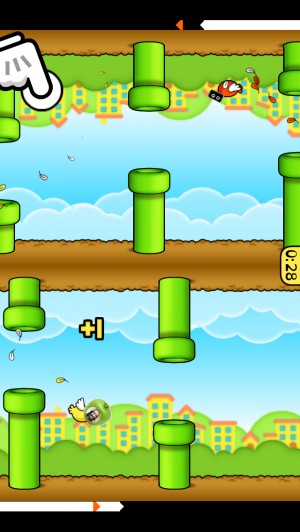 All of the games are played with one person playing on either end of the device, with the screen divided between the two players. Obviously, if you’re playing on an iPhone, things are probably going to be a little too intimate here, but if you’re on an iPad, there should be enough room for both players to be comfortable. By and large, the games don’t get too much more complicated than tapping or swiping, so it’s probably best to set the device on a table or other flat surface. The modes that support more than two players involve a bit of hot seat chicanery, of course, which isn’t necessarily a bad thing in a party game, as long as each game is relatively short. Fortunately, most mini-games in Mucho Party don’t last much longer than a minute, if that, and many of them can conceivably wrap up in seconds.

Among the mini-games, there are winners and losers, as you would expect. There’s nothing truly terrible in the lot, though there are a couple I’m not a big fan of, such as the ones that involve steering a car by manipulating a very small steering wheel. The games run the gamut from simple tests of who can tap faster, like the footrace, to a Flappy Bird-like competitive race called Selfie Bird, to slightly more involved tasks like one that sees you running a monkey up a tree, hopping over lit bombs and picking up unlit bombs to toss at your opponent. There are a few memory challenges, a few challenges that rely more on speedy observation, and some that are just pure action. It’s a good mix that doesn’t lean too heavily on any one concept, and with a couple of exceptions, they’re all simple enough to pick up on quickly even for people who don’t usually play games. 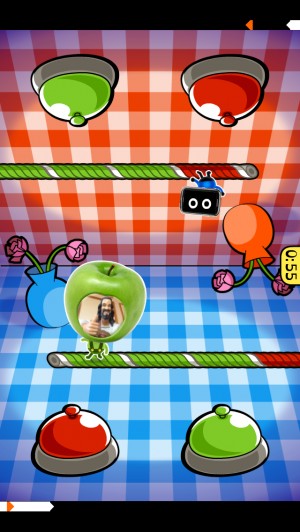 Mucho Party is quite a lot of fun with other people, but like most party games, it doesn’t hold up quite so well when you’re playing by yourself. The game makes an effort by including an AI with three different difficulty levels, but it rarely works out to be a fun opponent. Sometimes it’s completely brain-dead, while at other times it will display skill that no human player could possibly match. You can play all of the game’s modes on your own against the computer if you like, but if that’s the only way you mean to play the game, I don’t think it’s worth picking up at all. The biggest positive point of the single-player mode is that you can unlock things just the same as you can in multiplayer mode. Since a lot of the game’s content is locked initially and only opens up as you play, it’s nice that you can take care of that little chore yourself before other people get involved. Having unlockables always seems like a fun idea, but in a multiplayer-focused game that thrives on variety to survive, it’s probably not the best design choice.

Used for its intended purpose, Mucho Party is a pretty solid effort. I played this one with my family, and my wife, who generally sticks to games like Zookeeper ($0.99), was able to catch on pretty quickly and compete well in most of the games. The characters, made up of cartoonish bodies with real photos you take of yourself mapped on the face, were good for a few laughs, and the huge mix of games meant we could all find a few we were strong at. We were playing on an iPhone 5S, and as I said earlier, that’s not really ideal because of the small real estate, but we still had a good time with it. It’s not something you’re going to want to play every day, but I think that describes most party games, so it’s not a major strike against it. Solo players won’t find a lot of reasons to look into Mucho Party, but if you’ve got some less-seasoned players in your family or group and want to have some quick fun, this should be a decent crowd-pleaser.