Lots of people in our forum are having fun with Gameloft’s take on the social RPG genre, Dungeon Gems (Free). As you can read in my review, it didn’t exactly knock my socks off, but if nothing else, it’s a fairly competent variation on Puzzle & Dragons (Free) with some spruced up visuals. Like I do for most games in this subgenre, I’ve spent a fair bit of time playing it during my downtime, and have put together a guide to help out beginners who are looking to dip their toe into the game. Some of this advice will be familiar to people who have played similar games, while other tips are unique to this game, but if you’re getting started, you should find most of it helpful.

Don’t waste your crystals foolishly. This game is fairly generous with its premium currency, but it also takes a lot more of it to get things done. Your first priority with crystals should be summoning until you have a decent team. Next, you’ll want to increase your inventory size, since Dungeon Gems doesn’t give you much extra space to work with. I strongly advise against using them for continues or to refill your stamina bar. 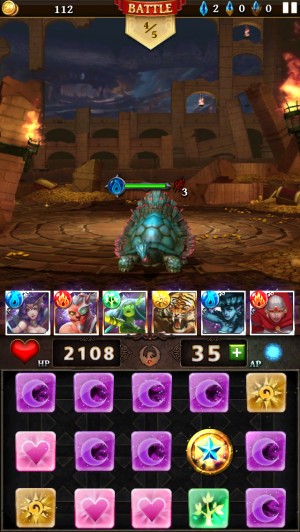 Keep your quests in mind. There are lots of free rewards up for grabs, and many of them refresh each day so you can get them again. To check them, just click on the treasure chest at the top of the screen. Little things like enhancing your hero with one hero at a time instead of all at once, so you can get the bonus for three enhancements in one day more easily, will help you out a lot. You can also claim those rewards from this screen. While I’m tool-tipping, don’t forget to fire up the game once a day to get your daily login bonus. In addition to giving you free cash and tickets, once per week you’ll earn some valuable crystals.

Avoid selling your fodder. Space and cash are both tight at times, but it’s always better to enhance your heroes up to at least level five and then use them as enhance materials for your main team. Sometimes you have to do what you have to do, but always try to go for enhancement over selling. You’ll barely get any coins for low level cards, so it’s barely better than just throwing them away.

Play the special dungeons in addition to the regular levels. They’re a great alternative, especially if you get stuck on one of the dungeon levels. You’ll earn extra experience, cash, and heroes that will strengthen you for your next attempt at the regular level you’re on. They’re a bit heavy on stamina costs, but the results are worth it.
Team Building Tips

Monocolor teams do very well in this game. As you’ll see in the combat section, the key to getting through the tougher battles in this game is to deliver devastating attacks. Although there’s a circle of elemental weaknesses, doing heavy damage will work pretty well even against your strong type, and a monocolor team is great for making that happen.

Light and dark teams are the best. Most of the enemies you face will be one of the three elemental colors. This means that if you really want to hedge your bets to avoid coming up against your team’s weakness, you’re better off choosing light or dark as a theme. They’re weak to each other, but neutral to the other elements that you’ll be facing more frequently. 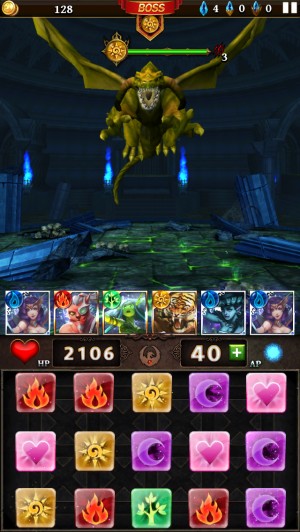 Pay attention to the skills of your heroes. Skills are your aces in the hole in this game. Make sure your leader has a useful leader skill. Bring along one or even two heroes with healing skills. Try to have at least one hero that can change gems of one element to your team’s element. Skills are often the difference between failure and success, especially once you get past the first 30 or so levels.

Focus on your leader. Always enhance and evolve your team leader ahead of everyone else. Having a strong leader increases your chances of another player choosing you as their helper, which earns you more points to feed into getting new heroes. You should also be on the lookout for enhancements that will improve your skills. If a hero has a chance of improving another hero’s skill, they’ll be marked with a special flag in the enhancement screen. Make your leader all they can be.

Choose a good helper. You can pick from a list, and the game will even tell you the next dungeon’s element and highlight helpers strong against it. It’s better if you can find a helper of the same element as your team, but if you can’t, going for the dungeon weakness is probably the best runner-up. Once again, pay attention to their skills to make sure they fit into your team.

Conserve your action points. Obviously, if you’re about to die, feel free to use a heal or something to pull your fat out of the fire, but things will go a lot more smoothly for you if you can keep as many action points as possible for the fight with the boss. Don’t waste your AP on linking different-colored gems together. While it can be useful for clearing the board, special abilities are almost always a better use of points. On a related note, try to finish off enemies as fast as you can to earn more AP. If you reach the boss with no AP, you’re as good as dead outside of the early dungeons.

Try to set up matches of five or more. Doing so will earn you a special piece. You can connect this piece to any adjacent gem to clear all the gems of that color off the board. You might want to use this piece right away, but it’s not always the smart play. If you’re one or two fights away from the boss, you’ll definitely want to save it unless you really have to use it. You can only have one of these special pieces on the board at a time. 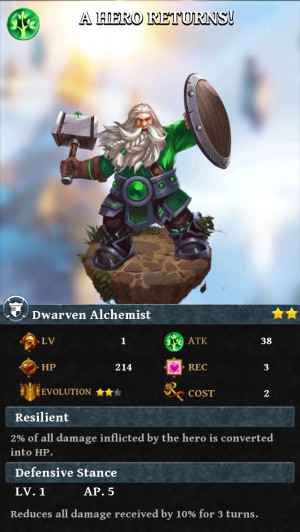 Overkilling early monsters is fun, but pointless. It’s nice to see those big numbers, but particularly in the case of a monocolor team, you’ll want to be very careful about how you’re using your pieces. Using four pieces when one or two would kill the enemy equally just means potentially fewer pieces you can use for your next attack. It’s best to squirrel away pieces here and there when you can get away with it.

When you reach the bosses, go in hard. Hopefully you’ve got a board with lots of pieces of your chosen color in front of you, along with a special piece to clear them all in one go. Fire it off immediately, then figure out how to get another special piece with what’s leftover. Especially in the cases where there are two or more enemies in the fight, it’s important to go on the offensive, because the odds don’t favor you in a defensive fight. If it’s your first time through a stage, feel free to let fly with your special abilities if you have the AP to use them.

Don’t worry about getting all three trophies your first time through. Although you get some nice prizes for clearing batches of stages with every trophy collected, those prizes are equally valuable down the line. Surviving a stage is a lot easier when aren’t sweating how many AP you’ve used. You can come back a little bit later when you’re stronger and mop the floors to earn those missed trophies.

With this advice in hand, you should have a nice leg up on your journey through the dank halls and caves of Dungeon Gems. After a while the game gets very hard, but if you put your team together well and persevere, you can make it through any challenge eventually. Just make sure you’re not too far from an outlet if you’re settling in for a session, because this game sucks battery power quickly. Nobody said looking good was easy, I suppose. Good luck and happy dragon hunting!