I find myself skeptical of games where spinning around an object and launching off of it is the core gameplay mechanic. Part of it is because the games often make themselves harder than they need to be: angular momentum is a tough concept to grasp and to execute well in a game. Thankfully, Beyond Gravity ($0.99) manages to avoid this trap by making it as accessible as possible.

See, while the gameplay involves jumping from spinning planet to spinning planet, the game makes it so that the ideal path is clear, with the collectable screws that also serve as the game’s currency being arranged in the ideal curve. So, not only is it worth it to try and launch toward these for reasons of ‘these will help me buy upgrades’ but also because it represents the safest path to the next planet. Often, this perfect path is challenging to decipher in these games, and tough to grasp because hey – angular momentum is a challenge in practice. It’s why baseball players who hit .300 are usually good hitters. Beyond Gravity tosses batting practice fastballs in comparison to other games about angular momentum. 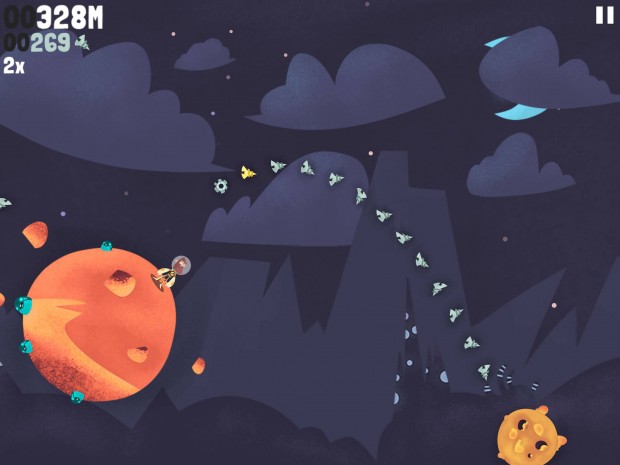 This isn’t to say that making it safely to the next planet is easy, just that it feels possible, which is key. The planet stops when tapping and holding, which helps, because there are the occasional fireballs that have to be avoided. Plus, the double-jump makes it so that if you fall just short, you have a chance of surviving. This is the rare angular-momentum game that I actually like to play because it feels like it was meant to be playable and understands that it’s presenting an unnatural challenge to players to try and conquer. 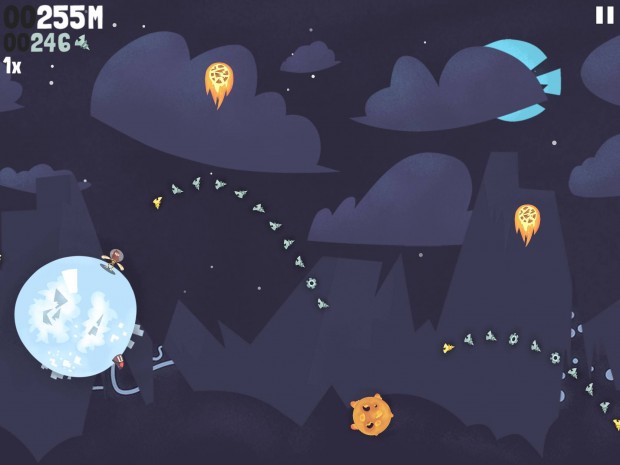 The game does have collectable currency, but takes after Ridiculous Fishing ($2.99) in that there are no in-app purchases. And what I think is good about limiting things like the triple jump and enhanced speed is that it forces players to learn how to play the game and how it works before getting more forgiveness. This does mean that the potential for higher scores exists by buying upgrades, but they have to be earned. And the game doesn’t skimp on giving out screws whether by earning them – with multipliers for getting chains of them in a row, and by completing lucrative missions.

Really, Beyond Gravity is a ton of fun and it overcame my skepticism. That the developer, Qwiboo, was responsible for Bike Baron ($1.99), helped going in, establishing that I might just like this. I also dig how the game shows how their art style looks without the Mountain Sheep style of 3D character models. Dive into this and give it a few rounds – it’s a well-made endless runner. And hey, I hear y’all like games without IAP.