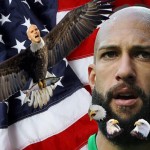 There’s nothing that screams America!! quite like putting stuff on sale to celebrate July 4th, and this year is no different: app developers from all over the world are putting games on sale for America’s birthday, a tradition like bald eagles, fireworks, and Tim Howard blocking everything sent his way – which this year includes paying more than a couple bucks for games. U-S-A! U-S-A! So, Americans, and the rest of the world, enjoy the cheap games this weekend. The first wave of sales is coming in, and here’s some of the interesting stuff that’s gone cheap so far: