It’s sometimes easy to forget how far mobile gaming has come in such a short time. Not even 10 years ago, people playing phone games were using ill-suited keypads to move sluggish characters around simple environments to fill the time while they waited for the bus. Almost none of the big game companies had their eye on the ball, and that left an opportunity for a bunch of smaller guys to get a lot more attention far more easily than they can today. As an example, just look at Sky Force. Originally released in 2004, developed by a four-person team in Poland, Sky Force‘s enjoyable mix of 1942 enemy patterns and Raiden-like visuals made it a big winner among early mobile gamers. It later enjoyed an enhanced port to other smartphones, with a choice of tilt or touch-based controls and a lot of features that were interesting at the time, like Open Feint. Like all too many games of that vintage, iOS updates eventually left Sky Force behind, sadly.

You can’t keep a good ship grounded, however, so Sky Force has made its return in the surely-never-to-be-outdated Sky Force 2014 (Free). Rather than just get the old game up and running again, developer Infinite Dreams has done a top-to-bottom remake/sequel that reflects that most wonderful year of 2014 in every possible way. You’ll see a lot of familiar sights on this new adventure, but even the things you’ve seen before have a whole new look to them. The gameplay has also seen some changes, some of which could be described as contentious, though not nearly as bad as they seem. It’s even got a hot 2014 price, available for the fantastic price of free. Hey, no, come back, it’s okay, trust me. 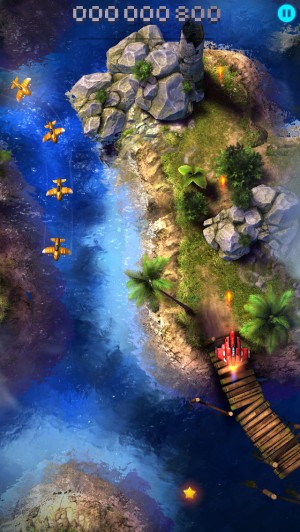 Just as it was before, Sky Force 2014 is a vertical shoot-em-up that puts you in control of a ship and sends you through several levels filled with all kinds of things to destroy. Each level is capped off with a fight against a big boss enemy, though one level’s boss might be another level’s mid-boss with the way things scale here. It’s pretty standard fare, highly reminiscent of the Raiden games that ruled the shoot-em-up scene in the arcades in the 90s. The main deviation is that there are occasionally people you have to rescue by hovering near them for a set amount of time. Other than that, all you need is to kill, destroy, eliminate, and all of those other fun verbs. At the moment, there are eight stages to play through, which again is fairly standard for this genre.

Sky Force 2014 does a lot of unusual things, however, and the first one is immediately apparent. When you start the game, you’ll be piloting a fully-powered ship, and by Odin’s beard, it is mighty. Your bullets are flying in every direction, things are exploding like crazy, and you are ruling the skies. That is, until you face off against your nemesis. After a bit of sparring, he’ll eventually destroy your ship, and it seems like your pilot was all out of extra guys, because that ship is totaled. Upon starting the proper first level, you’ll notice right off the hop that your ship now sucks. It’s horrible. It spits out a tiny bullet directly ahead of you. No spread shots. No missiles. Don’t even ask about the lasers. Truly, this is a tragic story. The Rocky 5 of iOS shoot-em-ups. It’s not the first game to use this kind of set-up to give you a feeling of disempowerment, but it really hits hard here.

If you want that awesome ship back again, and I’m quite sure you do, you’re going to have to earn it, slowly, piece by piece. During gameplay, destroyed enemies and objects will leave stars behind. In the older games, these were just for points, but in this one, they are your currency. You’re going to need a ton of them to get your ship back up to spec, and unless you’re quite a skilled player, you’re going to need your ship up to spec to get through all of the levels. That’s right, everyone, it’s grinding time. It’s an interesting thing to do for a game in this genre. I feel like shmup players tend to replay a small set of levels more than players in most other genres do, but it’s never quite as explicit as this since it’s usually about improving your score. You’ll be doing a lot of replaying here, and maybe, eventually, it will be about your score, but for the first while, you’ll be doing it to improve your ship and earn medals. 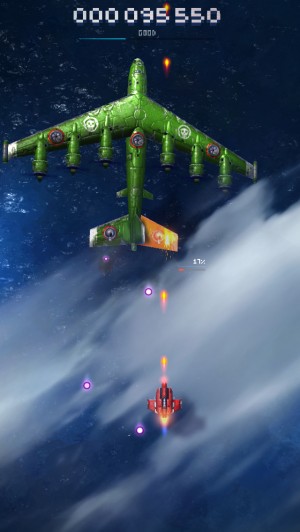 Each stage has four medals to earn per difficulty level, and to open up the next difficulty level, you have to get them all. Medals are also used to open up the next stage, and while the first half of the game unlocks almost automatically as long as you beat the stage, rescue all the people, and shoot most of the bad guys, opening up the last half of the stages requires you to clear stages without being hit, kill 100% of the enemies, and nab a few of the medals from higher difficulty levels while you’re at it. Avoiding hits is pretty purely a skill-based challenge, but taking out all of the enemies pretty much requires you to have certain upgrades in place, so there’s very little chance even an excellent player will get through the game in short order.

This is probably as good a time as any to discuss the game’s pay model, because it’s a little complicated. At first, the game seems like it’s free with ad support, and that’s apparently how it was originally planned. The game gives you a stock of 10 ships, and if you lose them all, you’ll either have to wait for a timer to restock them or spend some of your stars to speed things along. Your upgrades also have timers on them, and in free-to-play tradition, they start off rather short and negligible and become quite lengthy before too long. You can also speed these along with stars. The upgrades themselves also follow this pattern, becoming more expensive the more you upgrade them, and to be honest, each individual increment on the upgrade meter feels nearly indistinguishable from the prior form. Well, it’s free-to-play.

At the behest of the players, a few IAPs were added to the game, and they change things quite a bit. Mysteriously, the shop to buy them only appears after you’ve spent 1000 stars on things, so I guess the developers really wanted you to get a taste of that grind no matter what. Once you have it unlocked, you can spend your real money on four different items. First, you can remove the ads for $1.99, which means no more banners or pop-ups between play sessions. Second, you can get a star doubler for another $1.99, which goes a long way towards flattening out that upgrade grind. Third, you can spend $1.99 to have your stock of ships doubled and the timer on them sped up, effectively giving you unlimited ships unless you are the world’s most terrible player. Finally, you can buy a bunch of stars for $0.99, which seems like a pretty poor use of money, but I bought Bubsy The Bobcat on the SNES for $115, so I can’t really criticize you if you want to go that route. 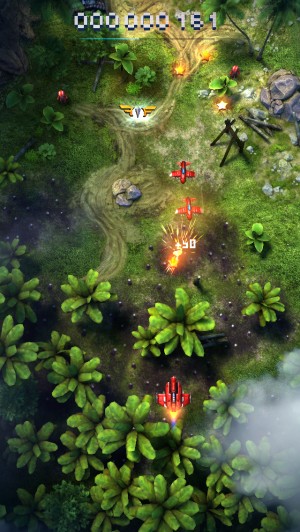 There is, unfortunately, nothing you can do about the timers on the upgrades, but apart from that, buying all three of the non-consumable IAPs basically gives you a premium game. There’s still a bit of grinding, especially if you’re not a high-level player, but it’s tolerable enough, especially since the underlying game is so good. You’ll basically earn enough for an upgrade or two every time you clear a level. It’s not going to satisfy everyone, and it’s definitely a different model from iOS’s other big free-to-play shmup Phoenix HD (Free), but I think the developer was looking for a way to give a finite, stage-based game some longevity and a sense of progression, and they certainly found it.

The tilt controls have been shown the door, but in their place, you have two different kinds of touch controls, which is really the only way to please everyone in the mobile shoot-em-up camp these days. The game engages in far fewer behind-your-back shenanigans compared to the older games, so you don’t have to worry about your finger traitorously hiding the enemy unless you venture too far up the screen. If you lift your finger off the screen, the game doesn’t pause, but it slows down to a crawl, allowing you to hit the pause button if you need a legitimate break, or reposition your finger if that’s all you need to do.

The presentation also joins the year 2014, with some genuinely gorgeous, colorful visuals, and a more modern soundtrack. The old game seemed to wear its technologically-limited roots with a bit of pride, but this game tosses all of that out, keeping the great, if not terribly creative, art design and buffing it all to a state-of-the-art shine. Everything runs a lot more smoothly as well, which definitely helps the bullet hell portions of the game look the way they should. There’s also Game Center support, with leaderboards and achievements.

Sky Force 2014 wears two faces. If you simply play it for free without sinking any money into it, it’s a beautiful, fun, very grindy shooter experience. If you buy the IAPs, you get a considerably more friendly experience that is easily among the top five original shoot-em-ups on iOS, yet still not without a couple of faults owed to its free-to-play design. It’s not all the game it could be, but taking it for what it is, it’s a terrific game, of such high quality that I could see even the hardest critic of free-to-play having a great time playing it. It’s a welcome return for one of the classics of the mobile scene, and I await Sky Force 2024 with great interest.