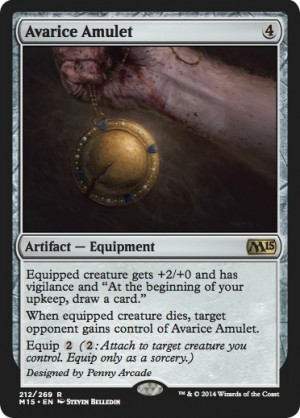 Originally revealed during a panel at PAX East, Wizards of the Coast is having some heavy hitters in the video game industry design Magic the Gathering cards for the upcoming yearly core set, M15. The full list of who was asked to design cards is here. It’s an insane collection of some of the best and brightest creatives in the gaming industry, spanning people like Minecraft’s Notch, Ultima’s Richard Garriott, Blizzard’s Rob Pardo and more.

During an E3 demo for the upcoming iPad title Magic 2015, we were given the opportunity to reveal the card designed by Penny Arcade’s Mike Krahulik and Jerry Holkins: Avarice Amulet. It’s an artifact that might not be that great in constructed or limited play, but is going to be amazing in Group Hug style decks in the Commander format. If you’re not familiar, these sorts of decks are typically used in giant multiplayer games to provide benefits to your “opponents" through card draw, buffing their creatures, or in the case of Avarice Amulet, both those things. It’s basically the perfect thing to equip your Phelddagrif with.

Oh, and they even managed to sneak a little Penny Arcade nod in there, with the Pac Man-ish look of the amulet itself. Overall, an awesome card for people who are in to, as my friends put it, “Wacky Magic." 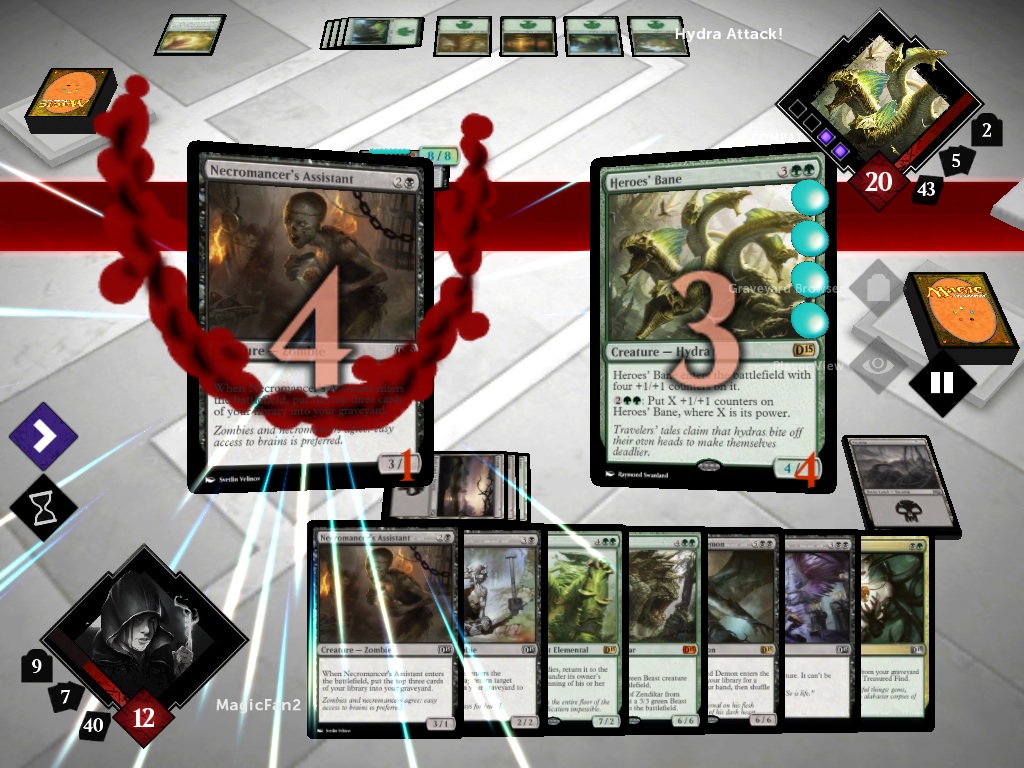 As mentioned, this all links up to the upcoming release of Magic 2015, the sequel to the awesome Magic 2014 (Free). If you haven’t followed these releases over the years, here’s some backstory- Originally simply titled Magic: The Gathering – Duels of the Planeswalkers and released on Xbox Live Arcade back in the summer of 2009, Wizards teamed up with Stainless Games who expertly crafted the absolute perfect gateway drug to the Magic universe. While the original Duels of the Planeswalkers is/was a great game, it was also a bit of a trojan horse. People like me who had played loads of Magic throughout my life but put the hobby to the side when un-fun things like work to do and bills to pay started to become a reality of adult life were given a whiff of just how much fun Magic still is.

Magic: The Gathering – Duels of the Planeswalkers got me back in to playing paper Magic, and similarly, the game served as an incredible tutorial for new players. Essentially, by beating the Xbox (and later PC and PlayStation 3) game, you knew the game well enough to buy a starter deck and head to a Friday Night Magic and actually know what you’re doing. The physical version of Magic absolutely exploded around the release of M10 and Zendikar because of the wizardry of Duels.

Starting with Magic 2012, Wizards of the Coast has been releasing yearly iterations of the game. It’s a little hard to continue to preview them, as you could sum up an entire preview article with, “Remember last year’s Magic release? Well, there’s another one coming this year that’s similarly incrementally better!" It’s the case with all yearly series, and it gets particularly tricky when the previous year’s installment was already really great… Making Magic 2015 really really great, I guess? 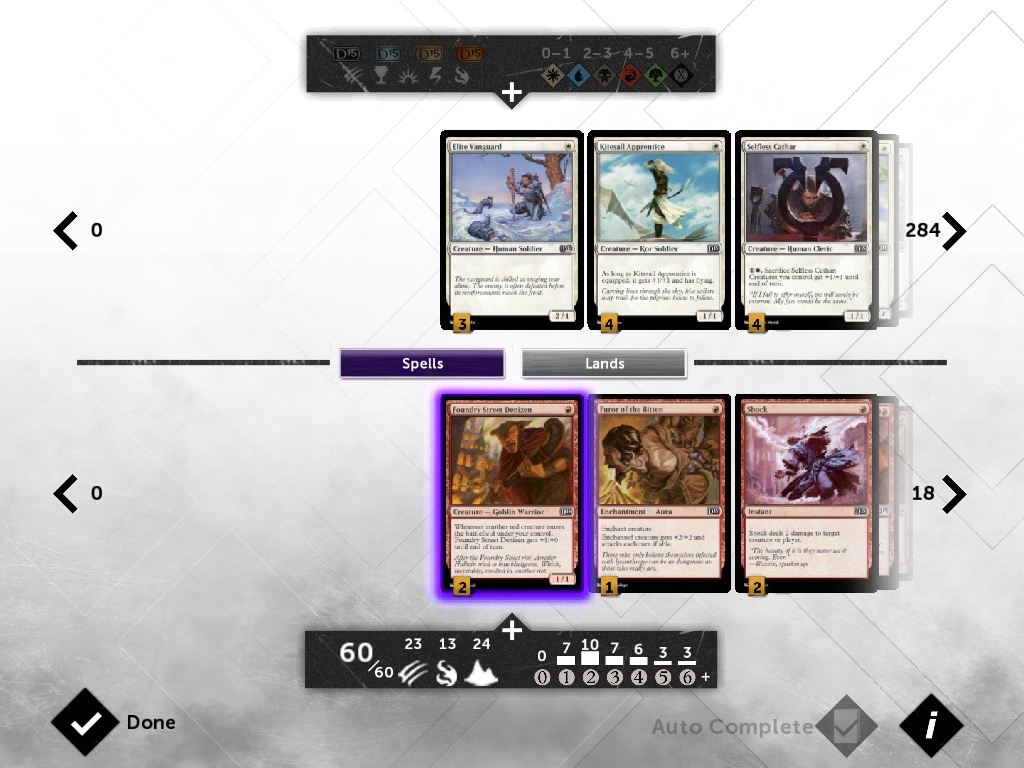 The main improvement this time around is something players have been asking for since the original Duels: You can finally make your own complete deck from scratch. Previously, you could only play using a very limited (in the scope of overall Magic decks) list of themed decks. These decks had their core cards which couldn’t be modified, but you could opt to add or remove additional cards you’ve unlocked.

Seasoned Magic players loved grumbling about this, and rightfully so, most of the decks were filled with cards that you wouldn’t typically play in a constructed format because they just aren’t that great. Additionally, if you wanted to play in a way that fell outside of what the themed decks wanted you to do, you were pretty much out of luck.

In Magic 2015, that’s all changed. You can build the ineffective wacky Magic deck of your dreams, or, whatever else you want. Cooler yet, the deck builder is smart enough to complete your deck for you in a surprisingly intelligent fashion. So, for instance, if you don’t really know too much about deck building but you really like a couple specific creatures and spells, you just drag them in, have the game complete your deck, and it’ll build out the rest of your deck for you with spells and lands that all make sense. It’s really cool, and only further serves to push these games as a gateway to Magic, as instead of just learning how to play you’re potentially learning how to build a competitive deck yourself- Something that often takes new players quite a while to get right. 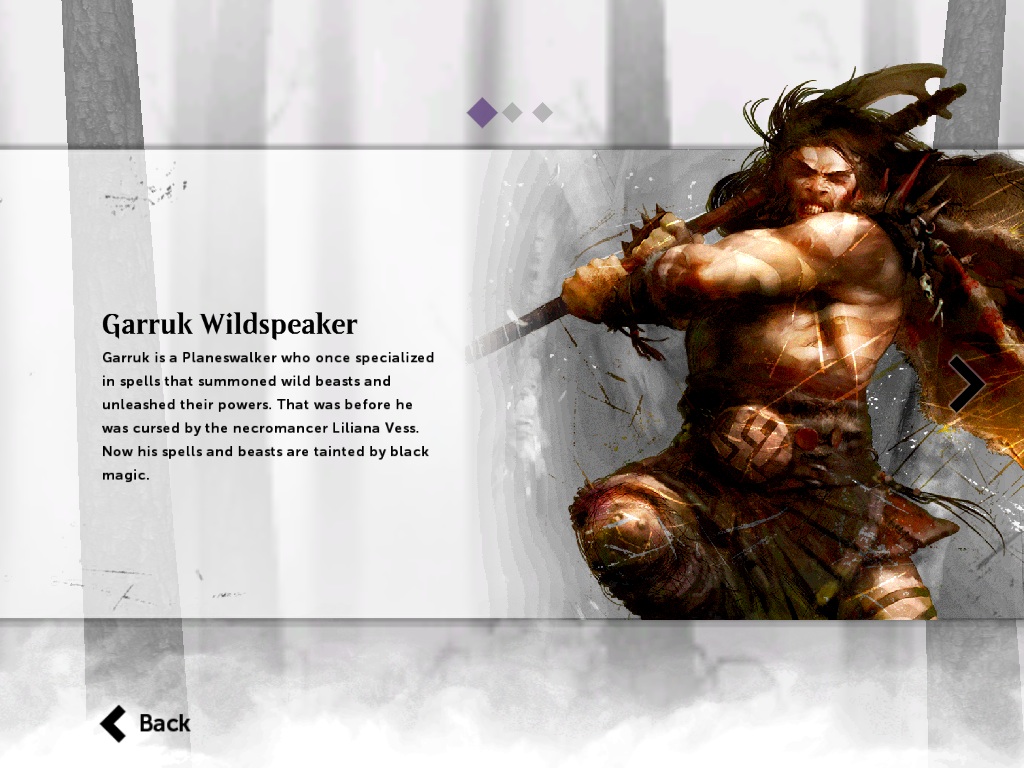 Also of note is the fact that the story of these games has become canon in the Magic universe. Each set of cards has its own story told through types of cards, flavor text, and things like that. The digital games are starting to act as the glue that holds all that together, and if you’re in to Magic lore, you basically need to play ’em. Word on the street is that things get crazy with the planeswalker Garruk this time around.

Overall, Magic 2015 is yet another awesome iteration of an already amazing game series. Just like Magic 2014, it’s going to be free to try with an IAP unlock to access the rest of the game, which is a pretty rad way to sell an iPad game. By the time you hit the pay wall in Magic 2014, you knew exactly what you were getting yourself in to, and Magic 2015 is going to be the same way.

Magic 2015 is scheduled to be released to coincide with the release of the M15 card set. M15 is launching on July 18th, so, expect the new Magic 2015 iPad game to appear on the App Store sometime around then.