Fluid SE ($1.99) from Radiangames is perhaps the most hardcore of all of their releases on iOS. Granted, many of the dual-stick shooters like JoyJoy (Free) are very much games for core gamers, the ones who like intense action and watching things go boom, versus, say, SideSwype ($1.99) and its puzzle-y-ness. But no, Fluid SE is for the person who wants to repeat a challenge again and again, trying to shave fractions of a second off of their best times.

See, Fluid SE is not a game about completionism at all. The levels themselves are not that difficult: just collect all the dots in each arena, and avoid the spectres that form from collected dots. After the first set of five levels, it’s easy to think “alright, I’m gonna tear through this thing." Then the game points out that more stars are needed to progress than you’ve likely collected in your run through of the first five levels, and suddenly its true objective is revealed: this is a game about relentless improvement through repetition. 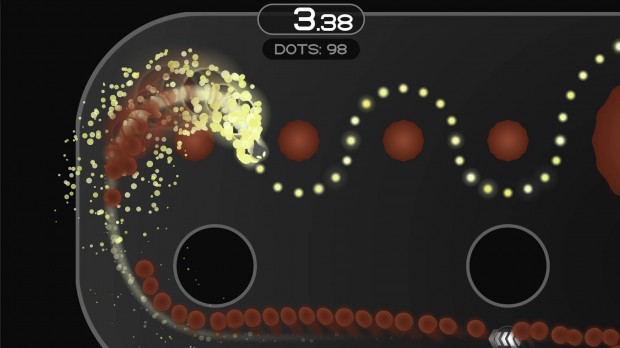 So, playing Fluid SE becomes about finding ways to shave off seconds, and then tenths and hundredths of seconds. This might come in finding a more efficient path to take through a level: maintaining momentum, and making as few u-turns as possible, for example. Just figuring out a good route can make for the 3- and 4-star times necessary to really progress. Finding efficient ways to take turns is necessary for 5-star times, but just being smart counts for a lot. Eventually, the star limits start to increase, encouraging turning those 2-star times into 3 stars, and those into 4-star times, maybe even picking up a 5-star time here and there.

Expect to play levels again, and again, and again, and again, but the brevity of the levels, all well under a minute, helps a lot. Playing a level ten times might take five minutes, and a time may have gone from 1-star to 4 or 5 in that span. It has the rewards of accomplishing something difficult, just without the arduous length of time necessary to do so. This makes the game far less about success through overcoming frustration, but about increasing the player’s satisfaction. 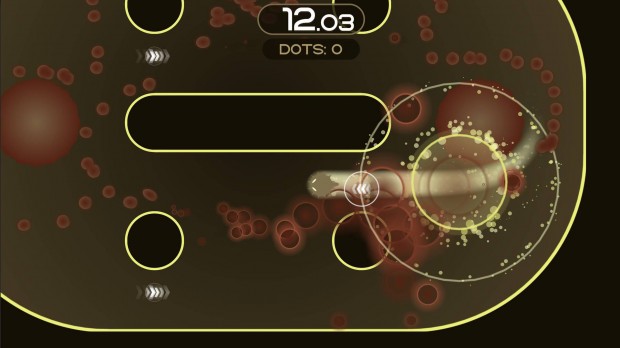 The game does have an interesting difficulty curve, though. The early set of levels start difficult as players jump in without knowledge of how the game’s systems work. The game gets a lot easier as players get better. Then, as the turbo levels and more complex level layouts start to come into play, the game perhaps becomes a bit more difficult, and some of the levels have to teach players that sometimes paths that feel unnatural are actually the correct ones to take. That’s not to say that the game ever feels easy, but at its heart, they’re still about executing the skills that were hopefully hammered in early on, so the game is perhaps never as difficult as it is in the very early stages. 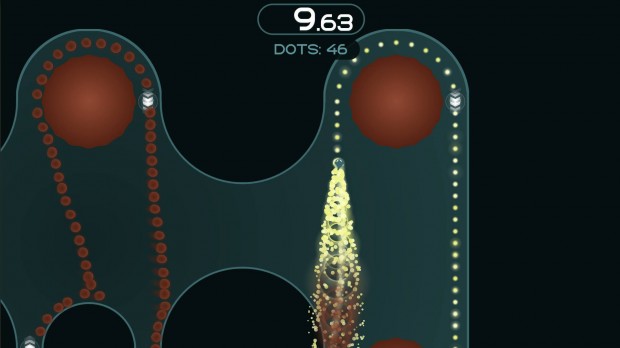 Now, we need to talk about the controls. This is a very precise game, and I am quite glad that the game supports MFi gamepads because it’s great to have that level of control over it. But the virtual joystick, while innately imperfect, does at least work: I’ve gotten 5-star times with it. There’s a “move assist" in the options that really, truly, helps out with making this game work on touchscreens. There are still deaths that come from the non-tactile nature of the controls, sure, but it’s a lot better than it really should be. I’d also like a quick-restart button, rather than having to pause and enter the menu to retry.

Fluid SE by its nature is best for people who want to be tested, who don’t mind repetition in the name of mastering a game and the challenge it sets forth. Thankfully, the game is designed so well that it makes this experience as satisfying as possible.