Certainly, Rival Knights (Free) has a formula that invites skepticism. It’s free-to-play from Gameloft, a company not exactly known for making “free" games. And it’s a jousting game that uses simplistic mechanics to play the game with. But it’s about the sum of its parts and not just the individual elements: everything comes together fabulously in Rival Knights.

The action is extremely simple, taking place in three phases: tapping to get a head start right as the timer goes from one to zero. Then, trying to stop the speed bar when it hits green or yellow to go faster, as speed is one of the three determinants for who will win. Finally, there’s dragging the lance around to deal more damage by hitting the target. These are all basic parts individually, but in the moment? They make for an intense experience, because one little thing going wrong could mean the difference between success and failure in a close battle.

Battles really come down to statistics: players will know whether a matchup will be a laugher or a close one beforehand as indicated by the base stats of each player. Speed and power are determined by the game: armor is basically the “I’ve bought better items than you" stat of the game. And sure, speed and power are determined by items too, but player performance plays a big role there too. The game does do a good job at making sure players know how close they are to opponents through a five-star system: one star is probably a blowout. Five stars? Expect to lose. 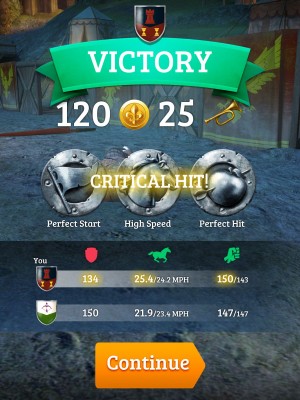 The singleplayer progression is extensive but perhaps the uninteresting part of the game: there’s hundreds of battles to go through, with forking paths and levels that grant additional rewards, all managed by an energy system of seals – the wax kind, not the aquatic mammal kind. The singleplayer mode will start off as the way of getting into the game, as the multiplayer modes are in the “events" section, which is a bit of a misnomer. And likely, the first time they’re explored is when the singleplayer energy is exhausted.

The events serve as the real meat of the game: they’re time-limited events where players take on computer-controlled versions of other players, getting ranking points for beating them. An event leaderboard consists of about a hundred or so players, making it actually possible to get to the tops of them, which is good because there’s lucrative coins and gems rewards for succeeding, though there’s participation bonuses as well. Literally: play an event a bunch of times and get coins and gems. Of course, there’s a second energy system that governs this mode, so it can’t be played on an unlimited basis, but the seals refill quickly (about 5 minutes per seal, with an item that can boost their refill rate). And then the singleplayer mode becomes a way to pass time waiting for the multiplayer seals to replenish. 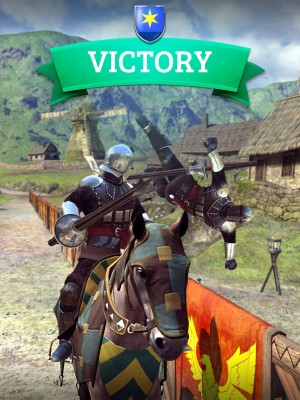 But really, this is a game that uses energy properly. If it were possible to play the game without limits, it would get boring quickly because the core game is simple and repetitive. The systems make it worth coming back to again and again over time, instead. And that the jousting remains so satisfying helps too: the game makes more decisive victories feel properly impactful. The game’s quite the looker, too. It’s just built to be satisfying.

Can the game be enjoyed for free? Certainly. The events mode does a great job at putting players with other opponents. Progression certainly is slower without buying gems and/or coins, but there’s certainly plenty of fun to be had without paying, though I happily put in $4.99 for gems to buy new items and get some energy refills.

While it is easy to be skeptical of free-to-play games like this, especially from a big publisher, Rival Knights winds up being quite the fun game.