Tetris ($1.99) is one awesome game. I personally consider it one of the best games ever made, and certainly one of the closest to pure perfection. While most other games are work-in-progress designs that eventually have to be snipped off, polished up, and released, Tetris‘s big coming-out releases on Game Boy and NES were essentially flawless realizations of the design’s potential. Other than catching up with technology like internet play, what do you really add to Tetris to make it better? Every attempt to change the game in some way has resulted in, at best, a lateral move, and at worst, an absolute disaster. Well, 99 Bricks: Wizard Academy (Free) offers a few interesting answers to my question, and while it’s probably not a better game, it’s a more than worthy side-trip for fans of that classic.

The goal of 99 Bricks is to build yourself a wizard tower out of falling bricks, all of which are in the shapes of the familiar Tetris blocks. You need to get your tower as high as you can to show what a cool wizard you are. Each of the game’s stages starts you off with a different shape for the base, and it’s up to you to build it up from there. Along the way, rival wizards who are jealous of your tower will pop in to throw some complications in, but generally, your worst enemies are going to be gravity and your own mistakes. If you you lose too many blocks off the sides of your tower, the game will spawn a tower top, finishing off your current run. The camera will zoom out to let you have a look at your completed tower, and you’ll be given some coins to spend in the game’s shop. It might seem like 99 Bricks is a fairly straightforward variation, but what’s interesting about it is how it uses the near-ubiquity of its inspiration to mess with your expectations. 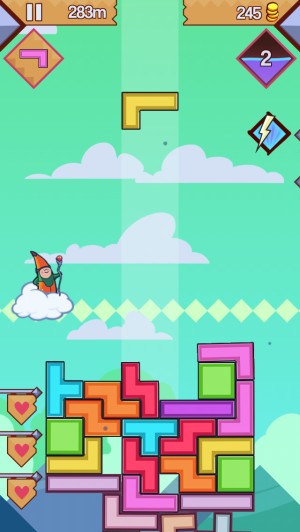 You see, this game doesn’t work quite the way Tetris does. In that game, your play area is an unchanging 10×20 field with solid walls and a floor. The blocks move in increments of one block and once they’re laid down, for better or worse, they stay put. In 99 Bricks, while the play area does have its outer boundaries, most of the time you’re going to have a gap between your tower and the outer edge of the screen where your blocks can fall in. Even with a few nefarious tricks that let you span your tower across the width of the screen, that gap still extend outside of the viewable area. On top of that, your blocks move in increments of half a width of a block, so while the shapes are designed to naturally fit together, that all goes out the window very quickly if a gap is half a block instead of a whole block.

The most critical difference is that your blocks don’t lock into place when you set them down. If they’re top-heavy and there’s nothing to secure them from tumbling down, they will. If you place them on top of another block with the heavy part hanging off the side, they’ll slide down and create a usually-fatal angled area. Even if you’re a good little Tetris player and diligently hook the blocks into each other as you build, you’ll notice parts of your tower starting to lean a bit at times. Fortunately, at certain height intervals, your tower will lock into place, but any leans or oddly-placed pieces will also be frozen in place. You can’t just single-mindedly put the pieces together. You have to think about things like balance and weight to ensure pieces you’ve already placed don’t end up taking the whole tower down. 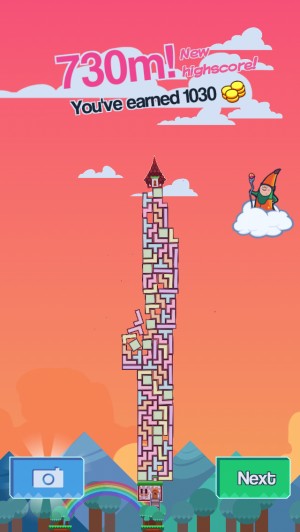 You do have a few extra tricks up your sleeve in the form of wizard powers, however. These allow you to do things like zap the last block you put down or even create new tower pieces to build on, but only if you have the mana to use them. Of course, as I mentioned earlier in the review, you’re not the only one who can drop some magic. At certain points in your tower’s growth, one of several rival wizards will appear and throw a curse at you. The game again has a bit of fun with people’s expectations of Tetris here. One of the curses will turn the next block into a giant block, while another might simply turn your next block invisible and let you sort it out. Handling these curses is a great bit of spice to break up the stacking play now and then.

There are several different stages to play, with each new one unlocking a new magic spell and a new rival wizard. To unlock the next stage, you have to complete a variety of missions in the stage you’re on. The missions are typical goals you’d find in a endless game, and they point strongly to the game’s origins as a free-to-play title. 99 Bricks was originally released as a free game in a couple of regions, with IAPs and an economy that reflected that status. The developers ended up deciding on a paid model for its wide release, reworking everything to cut the grind and focus on fun. As such, things like upgrades, new wands, and hats are all priced affordably enough to earn pretty frequently by simply playing the game. There’s no longer a stitch of IAP to be found in the game.

If there’s one thing that doesn’t work well with this game, it’s the same thing that hurts the iOS version of Tetris: the controls. They’re pretty close to how that game plays, with swipes to the left and right moving your piece, swiping down quick-dropping it, and tapping on the screen rotating it. It’s probably the best possible layout without a proper directional pad and buttons, but I’ve always felt it was a bit too slippery in Tetris when the game speeds up, and the half-block movement in 99 Bricks adds to the problem. Accidental rotations sometimes happen when you’re tapping on a blue magic orb to collect it, and of course, like Tetris, sometimes you mean to swipe and the game reads it as a tap. A misplaced block can be devastating, so it stings when it happens due to a control goof-up.

Even with the occasional control-related frustration, I still think 99 Bricks: Wizard Academy is a terrific little game. As a fan of Tetris, its familiarity is inviting, and the ways it betrays that familiarity are exciting and sometimes hilarious. Most of all, this is just a really fun falling block puzzle game, enjoyable both as an endless game and as a more goal-focused progression experience. I think it’s something anyone who likes Tetris can appreciate, and that’s just about everyone there is, right?