I tend to think that gamers are probably better than the average person at coordinating their left and right hands, thanks to years of hard training on concepts like making Mario jump and move to the right at the same time, which is something my mother may not ever grasp. Well, after playing dEXTRIS (Free) for a while, I find myself rethinking just how well ol’ lefty and righty play together, even after all this time as partners. Although the title of this game first made me think of Tetris ($1.99), this game is actually another one of those short, super-hard, reflex-based challenges that have become so prolific since Terry Cavanagh’s Super Hexagon ($2.99) released a couple of years back. I should stress, having played quite a few of these, dEXTRIS is actually a fairly distant cousin, mostly evoking similar feelings as you play rather than actually spinning off from Hexagon’s gameplay like many others.

In this game, you control two little squares as they make their way along a vertical shaft at increasingly high speeds. The shaft is littered with spikes jutting out from its sides and diamond-shaped obstacles sitting in the middle. Touching any of these with either square results in instant death. Avoiding the spikes is a simple matter of having both squares hug the opposite side, or if the spikes are coming from both sides at once, staying in the middle. The diamonds come in two sizes. The smaller ones leave enough room on either side for one or both squares to safely pass, while the bigger ones only have space for one square on either side, requiring you to split the squares to safely navigate them. 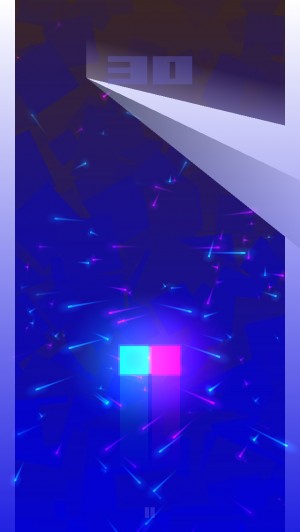 By default, the squares stick together in the middle of the screen, which is rarely the safest place to be. By touching the left side of the screen, both squares will push up against the left side of the shaft, while touching the right side activates your super secret special move of pushing up against the right side of the shaft. If you touch both sides at the same time, the square split and hug opposite walls. Taking your fingers off the screen entirely causes the squares to jump back to their default middle position. It’s about as intuitive a control system as you could possibly imagine for this type of game, but you’ll still end up tying your brain in knots trying to keep up with things once the speed picks up.

There may be no goal in sight beyond beating your previous high score, but there is a line every ten obstacles that gives you an incredibly brief respite before things pick up again while also giving you a quick heads-up as to your score if you aren’t able to divert your eyes up to where it’s regularly displayed. Thinking about it now, it kind of reminds me of the dreaded Turbo Tunnel from Battletoads in that respect. The first few stretches of 10 obstacles are easy enough that almost anyone should be able to clear them from the get-go, but the high scores on the leaderboards right now are sitting just past the 150 mark, so that gives you some idea on how quickly things get crazy. The game manages to nail that feeling that you can always do a little better if you just give it another try, and restarts are almost instantaneous, so it’s very easy to just keep on playing.

The visuals are very simple, with a relatively uncluttered blue background behind the white obstacles. Your squares are the brightest objects on the field, and they shower particles of their respective colors whenever they brush up against a wall, cross a marker line, or hit an obstacle. The music is fast-paced and foreboding, with sort of a 1980s future technology sound to it. It helps add to the tension, even if it’s not something you’d be likely to listen to on its own. The game has leaderboards through Game Center, though there are no achievements. Since this is a free game with no IAP, you can expect to see some pop-up ads now and then between games. The frequency likely varies by region, but I was generally seeing them every few games or so, and they were never placed in a tricky way to fool me into clicking on them, so they didn’t bother me much.

I think dEXTRIS is a pretty cool game that manages to do something almost completely different from what we usually see out of this emerging genre. Keeping your left and right sides so tightly coordinated is an interesting challenge for your brain and reflexes, so it’s not surprising to see it’s made a pretty big splash in our forums. On top of all that, it doesn’t cost a cent and isn’t trying to sell you anything. If you’ve got any love for these super-hard score attack games at all, make sure to check this one out.