One of the first PC games I ever played was a roguelike called ZZT. It was comprised entirely of ANSI characters, so there were no real “graphics," as everything was text based. The Atari era was very simplistic in a similar way, often utilizing singular color schemes for backgrounds, with very little detail due to the nature of technical limitations at the time. Pixa ($0.99) attempts to recreate said era with a touch-screen interface, and the results are extremely mixed — mostly dependant on how fondly you remember the old school days.

Pixa is an adventure game pure and simple, with an oddball set of twists attached. The story involves an abusive mother, a protective neighboring father, and a whole lot of insane dialog that feels like a modern day saturday morning cartoon. The script is billed as “witty," and I’d be inclined to agree — I really wasn’t sure what would happen next — including an attempted interlude with the neighbor’s daughter. 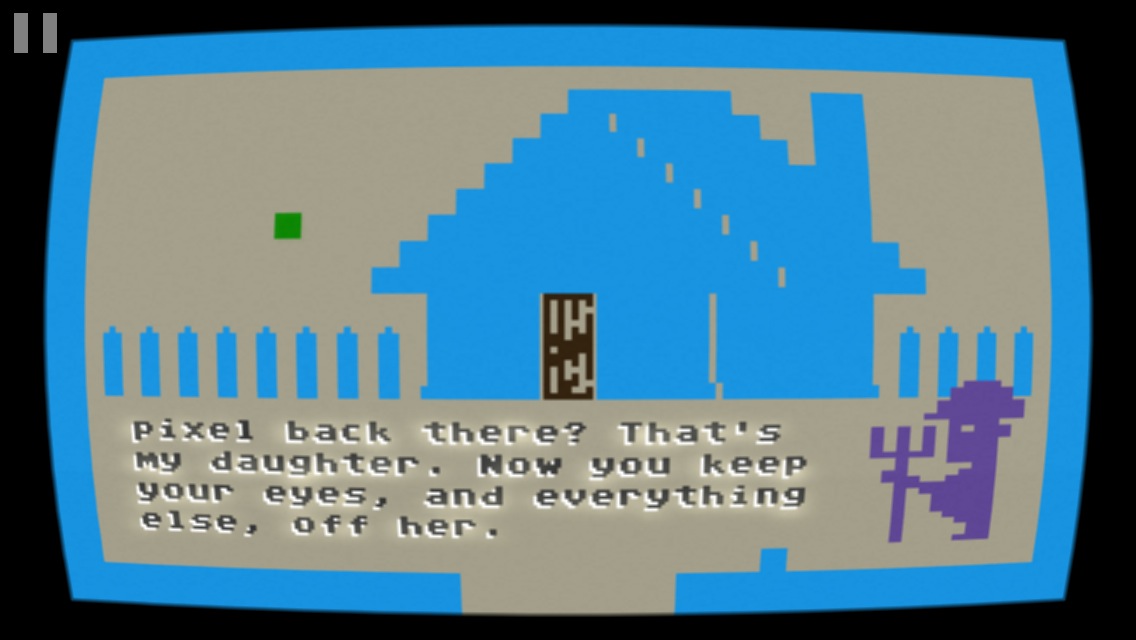 The style doesn’t just capture the Atari 2600 at a base level though, as a lot of effort was made to recapture the entire feel. From the scanlines to the rounded corners to the deliberately faded colors at points, Pixa isn’t just made this way to save a development budget — it was made by clear fans of the era.

Like any adventure game the focus is on exploration, which you’ll do by simply swiping towards the edge of the screen that you want to move to. Pixa responds to both small and broad swipes, which allows you to strategically slingshot your way across the screen or just inch forward. For an unassuming adventure game with minimalist visuals, I wasn’t expecting such a precise and easy to use control scheme.

Your task is to roam around the world and collect trophies, which you can bring back to your home, only to have your mother continually call you a useless idiot. The first couple of levels are basically free passes as they only consist of several rooms, but after a few trophies you’ll collect coins to buy upgrades for your character, and the levels themselves get much larger and more confusing. They’re also randomly generated.

Combat takes place by way of a rhythm based minigame, where you have to time swipes to a beat. It’s true to the simple nature of the game, and doesn’t take the focus off the real core principle — exploration. But despite how true it may be to the era, it does take a little while to really ramp up, and may lose those who didn’t grow up with an Atari. Pixa‘s biggest fault is that it is very slow to start, and sometimes, progress can be impeded by the occasional glitch (most notably the ability to lose items in walls).

If you can deal with dated visuals and some slow-going adventure conventions, Pixa will definitely do a good job of holding your attention for some time. It doesn’t have IAP, and it even has a special surprise for those who nab all 24 standard trophies, ensuring a hefty amount of replay value. This is a retro homage done right, and not just for the sake of being retro.