The original Wind-Up Knight (Free) was a great game and a fine example of how platformers, a genre many thought couldn’t get along with touch controls, can work just fine on mobiles provided they’re designed properly around the hardware. The mechanic of constantly moving forward while asking you to manage jumps, swings, rolling, and the shield gave you plenty to worry about without having to fuss around with a virtual directional pad, and the game made sure to test your skills at all of those things to the hilt. It boasted tons of levels, an assortment of collectibles, and plenty of goals to shoot for during play. It also apparently struggled at its initial price, because it was later retooled as a free-to-play experience, albeit a fairly generous one, since you could still unlock pretty much everything without paying a cent if you were skilled enough at the game.

That’s probably why the sequel, Wind-Up Knight 2 (Free), is launching as a free-to-play game. At least, that’s what it initially seems like, but in actuality, it turns out to be more of a demo with an IAP unlock for the full game. The initial free download covers the first eight story levels along with giving you access to the endless tournament mode, with the rest of the story levels available to purchase in one lump sum. The way this IAP works is kind of interesting, since the game will offer it to you at a discount if you make the purchase within 30 minutes of receiving the message. The price has already changed once, from $3.99 to $1.99, with the non-impulse price set at $8.99 initially but now set at $4.99. This could change again, so don’t take these prices as gospel. 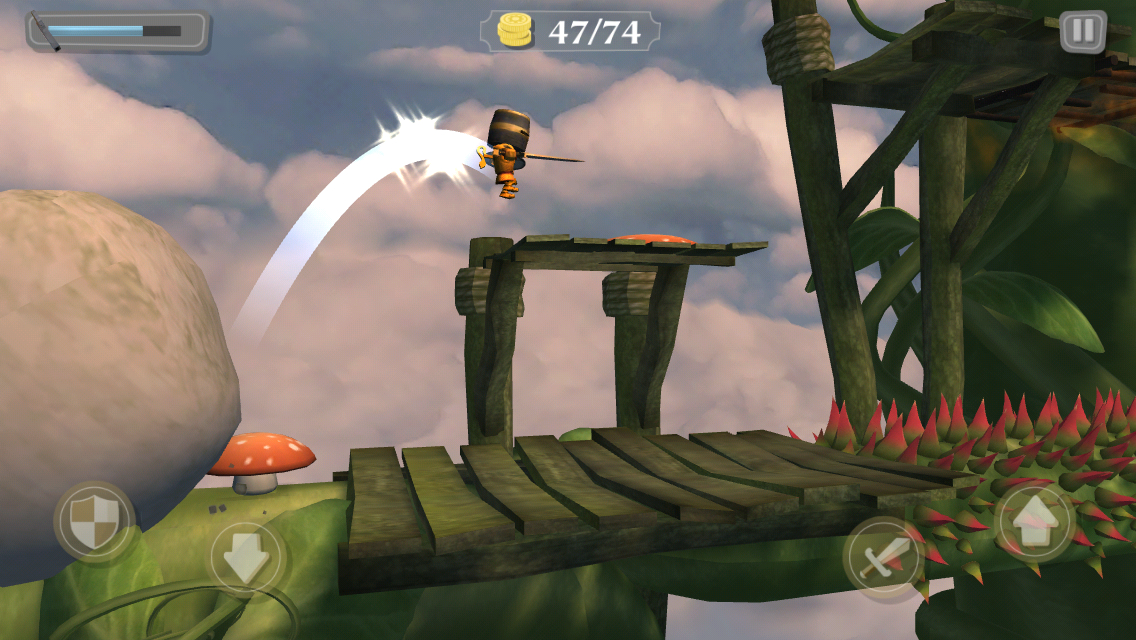 As a sequel, Wind-Up Knight 2 is more evolution than revolution. You once again play as Sprint, the clockwork knight who constantly moves in the direction he’s facing. He’s got the same arsenal this time as he had before. He can double-jump, swing his sword to attack enemies, raise his shield to cover his head, or roll to avoid certain hazards. The biggest addition to the game, aside from the tournament mode, is the presence of checkpoints. Yes, you no longer need to tear your hair out trying to clear a level in one pass, though you’ll be rewarded if you do. Some people really dig the challenge of trying to do a perfect run without even the temptation of mid-stage relief, though, and for you crazy people, there’s an option to turn off the checkpoints. For everyone else, you can now rest easy knowing that making a little mistake near the end flag isn’t going to send you all the way back to the start. It’s a great thing to add to the game, for a couple of reasons. First of all, it makes the game a bit more accessible for players of all skill levels.

The second reason I like it is because adding checkpoints allows the level designs to be much more wicked, something Wind-Up Knight 2 revels in. While the first game gently held you by the hand, slowly introducing your character’s moves in a steady build-up to the harder stages, this game almost immediately chucks you into the deep end, and my friends, it only gets deeper. The levels in this game are tough, occasionally unfair, but most of all, very clever. The game delights in running you into walls, resting easy with the knowledge that checkpoints will take some of the sting out. Lots of clever things are done around your character’s abilities. One fairly early stage is basically a tower with an elevator running in the center. You have to take advantage of the fact that when your character hits a wall, he turns around and heads back the other way to constantly return to the elevator, going up one floor each time until you reach the goal. 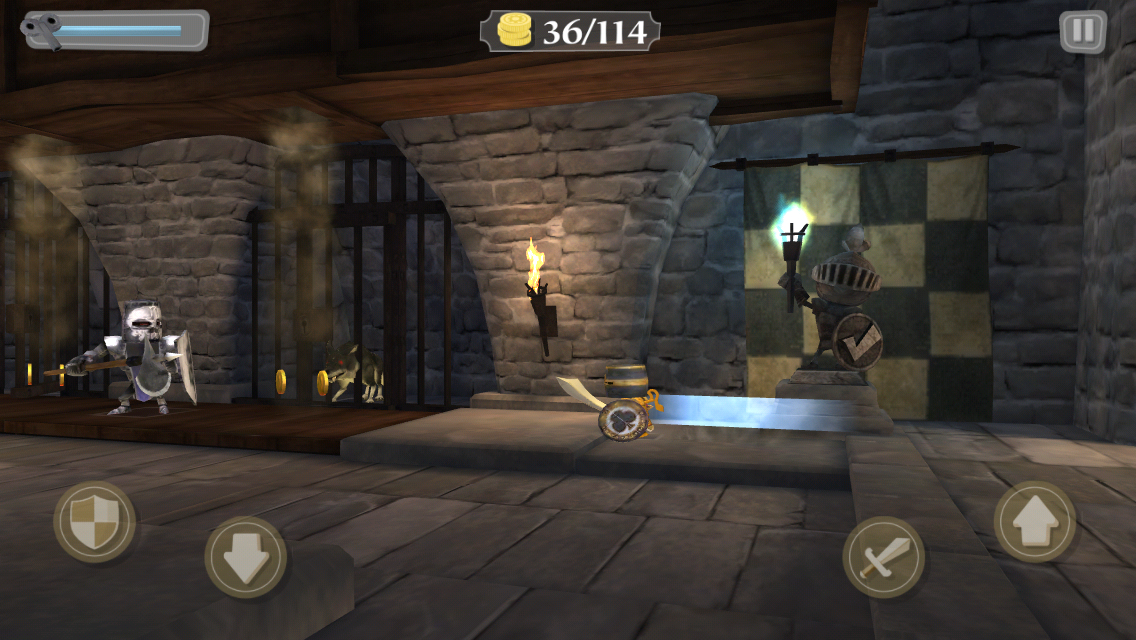 The levels get longer and more difficult much earlier in the game and that, coupled with the fact that Sprint starts out with his full set of abilities, means that less of the game is spent in dull tutorial stages. Instead, the developer, quite used to the moveset you’ll have access to, is able to put together sprawling designs that truly challenge you. This is exactly what I like to see in the first sequel to a well-made platformer. So, while Sprint himself doesn’t have much in the way of new tricks, the levels bring more than enough new ideas to the party to make this feel like a bigger and better game.

The first game offered up a lot of replay value in that each stage had to be cleared with an S-rank to unlock everything. As well, there were cards hidden in the stages that would unlock new equipment pieces of you could find a complete set. These were good reasons to go back to levels until you mastered them. In that theme, another change from the first game is the addition of extra goals for each stage. After clearing the stage with any rank, you have access to three special goals. These vary from stage-to-stage, having you, for example, do a run where you can’t attack any enemies, or a run where you have to catch fairies in a net. These goals often require you to approach a level in a very different way from a normal run, forcing you rewire the way your brain memorized each stage on the first pass. Of course, ranks make a return, with the S-rank this time contingent on clearing the stage with no misses, every coin, and the secret hidden hat found somewhere within. 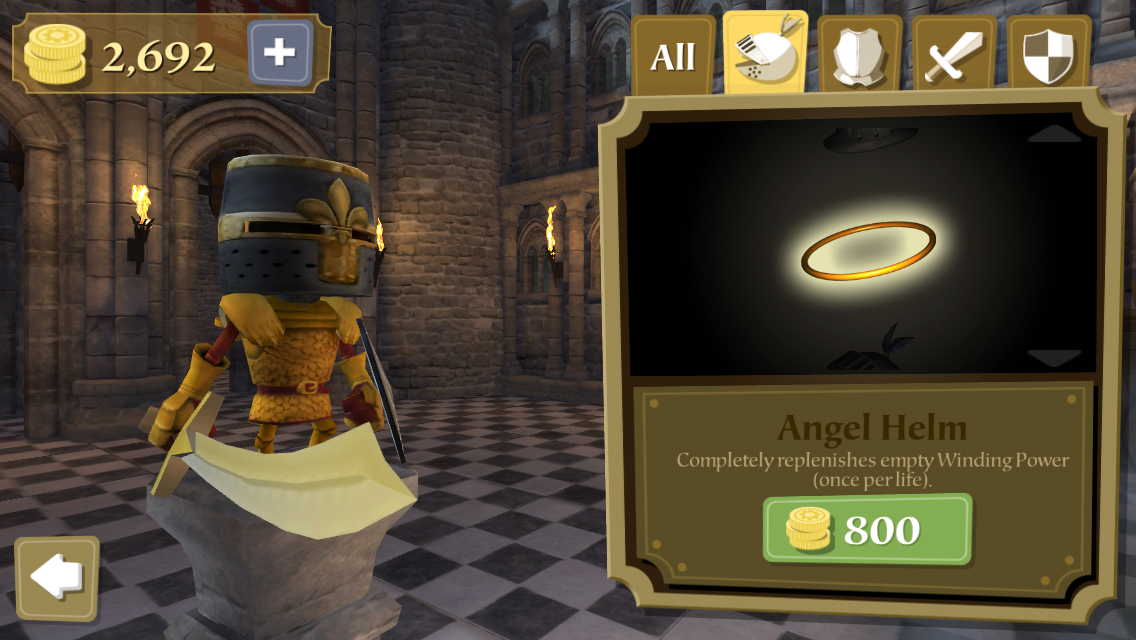 In total, the game offers up 42 stages, and if you’ve a mind to completely clear them all, you’ve got a huge challenge ahead of you. If that’s not enough for you, there’s also the game’s tournament mode. Once a day, the game will give you a free ticket to play this mode, which is basically an endless challenge made up of stages from the story mode. You’ll collect gems as you work your way through the stages, which can be exchanged for special equipment pieces. If you fail, you can use an ever-increasing amount of tickets to continue, but unless you save them up, you’ll only be able to use this tactic if you spend real money buying extra tickets via IAP.

As the game features Game Center support for leaderboards and achievements, you can compare your score in this mode with your friends to see who can do the best. I don’t like the way you can buy victory here, but apart from that, it’s a really nice mode that gives you a sort of endless challenge to play after you’ve beaten the main game. This mode is also available for free, and since it uses the stages from the main game, if you’re really stubborn about not paying anything, you will eventually get to see every stage the game has to offer by playing this mode. 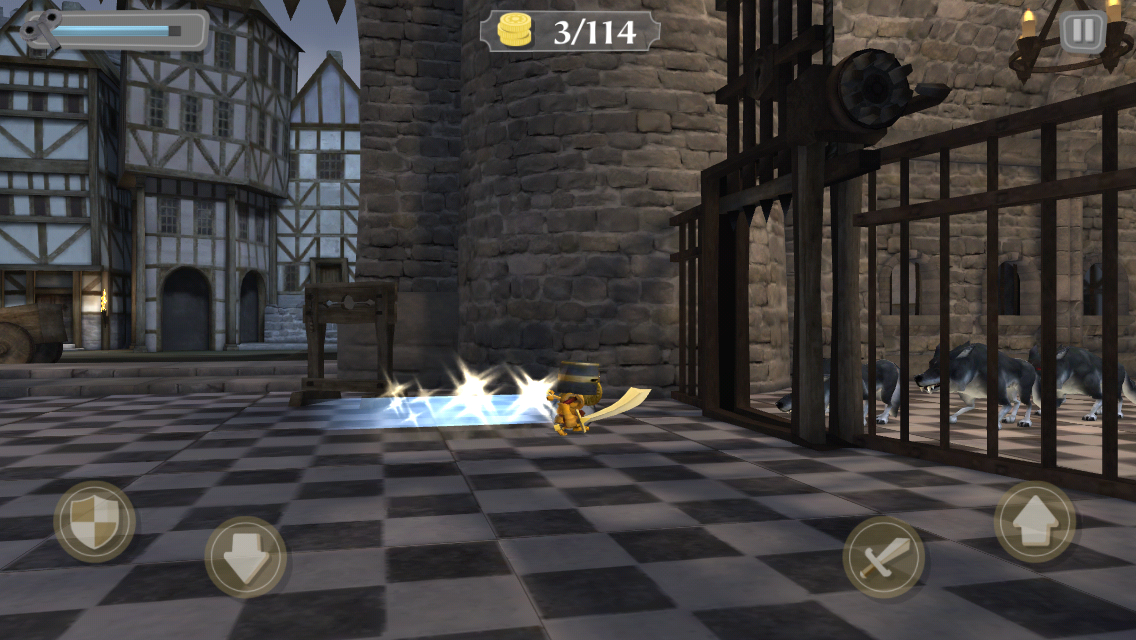 Somewhat similar to the first game’s notes system, the coins you collect playing through the levels can be exchanged for new equipment pieces that have various effects. Like before, these are quite pricey, so you’ll have to save up for a good long while if you want to break the game. Unlike before, you can actually grind out coins by redoing levels if you want to. I appreciate this, since it means most of the content can eventually be available to anyone, even if they’re not quite good enough to S-rank every level. There are a few pieces you have to earn, and I feel that makes a good enough reward for the higher-level players, especially since even the ones that can be bought come a lot more quickly with the coin rewards from S-ranking.

Controls are once again virtual buttons, placed in similar positions, and working just as well as they ever did. The game also supports Mfi controllers, but I found that, for me, this oddly made the game more difficult, so I generally preferred to play using the virtual controls. While the first game was a bit of a looker back when it came out, Wind-Up Knight 2 ups the ante to keep up with modern standards. This game looks gorgeous, and while it recycles plenty visually, there’s still quite a lot of candy for the eye here. Sometimes too much, as even on an iPhone 5S, there were moments where the framerate took a little dive. Generally, however, the game runs smooth as butter. The audio, I’m less enthused with. While the sound effects are fine, the new music just isn’t as catchy as the theme-heavy mix of the first game. The background music for the first set of stages is actually kind of irritating. The music gets better, but it never quite reaches the level of the original Wind-Up Knight. 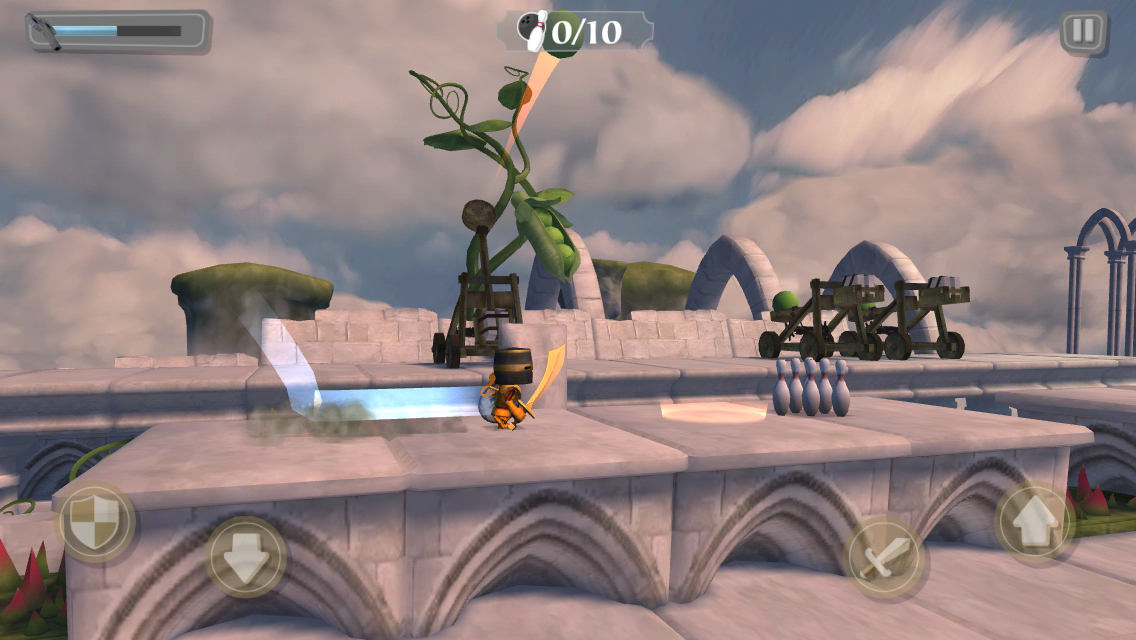 Faced with big shoes to fill, increased competition, and a very different market, Wind-Up Knight 2 isn’t in the most enviable position, but it manages to succeed through good old-fashioned elbow grease. It has no special tricks or gimmicks over its predecessor to try to win you over, apart from the new endless tournament. Instead, it opts to offer you a new, more sophisticated set of challenges, all wrapped up in a more beautiful presentation. There’s something here for a wide range of skill levels, and it easily bests the first game in overall design and execution. I’m not sure if I’d call this the best platformer on iOS hands-down, but it’s certainly on the short list, and if that’s not worth throwing down a few bucks for, I don’t know what is.