I find it kind of interesting that although one of the appealing aspects of flying is the freedom from our earthly bindings, a great deal of games built around the concept opt to set themselves up like a dark ride at Disneyland. You get in your ship, or on your dragon, or into your fighter jet, and are pulled along a rail while all kinds of craziness unfolds around you. Usually you’re more the gunner than the pilot, since you can really only move yourself around in the little one-way tunnel the game has set up for you. There are a lot of good reasons for this kind of set-up, including a desire to guide the experience for the player to create more cinematic scenes, technical limitations of one sort or another, or a simple lack of the resources required to create a full, free 3D world. I suspect with Star Horizon ($3.99), the new space-themed rail shooter from Tabasco Interactive, it’s that first reason more than anything else.

Star Horizon follows the story of a Federation pilot named John, and his sassy AI counterpart who is named Ellie, not Cortana, thank you very much. During a battle with some rebels, things go horribly awry, and John is unexpectedly put into cryo-sleep for a long time. When he wakes up, he has no idea where he is, but he means to solve the mystery of what happened, and his method of investigation is to blow up everything. The game takes place over ten stages, with each one ranging in length from five to ten minutes or so. That puts the length of the game at about an hour and a half from start to finish, which admittedly is not all that long, but suits the film aspirations the game seems to have. 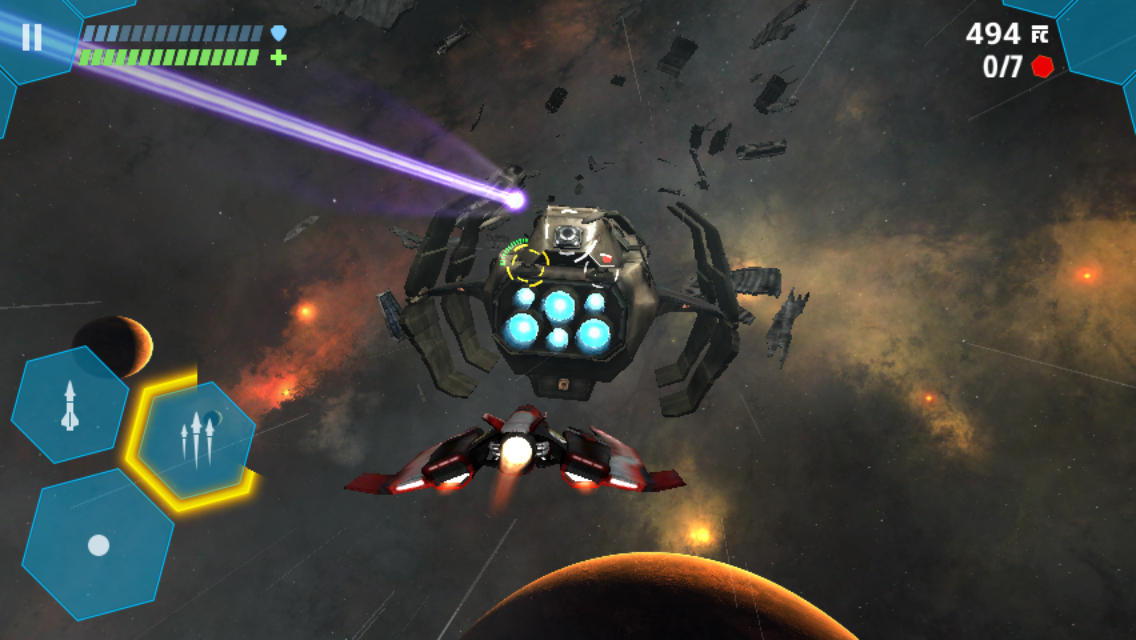 Basically, this game is content tourism in the first degree. The challenge level isn’t very high at any point in the game, but it throws enough at you that you don’t really notice most of the time. The set pieces are quite beautiful, with lots of interesting ship designs and plenty of cinematic camera work. The story isn’t the stuff of legends, but I’ll give it props for making a really strong effort. Occasionally you’ll have a chance to make a choice that will slightly alter the dialogue and story, which is pretty cool and gives some incentive to play the game again after finishing it. It’s even fully voiced, though the actual quality of it is very hit-or-miss. The story at least hits a nice tone, serious enough to care about, yet with a sense of goofiness that helps cover its dramatic shortcomings.

While you’re taking in all of this atmosphere, you’ll be tasked with moving around a bit to avoid obstacles and enemy shots, and firing back using your three different weapons. Movement is handled with your right thumb, while your weapons are mapped to three virtual buttons. You can do a barrel roll by swiping quickly, though I found that move to be even less useful here than it was in StarFox. Your ship has two life bars. Damage is first subtracted from your shields, which regenerate over time, and should those be depleted entirely, you’ll then lose energy from your life meter. If you run out of life energy, presumably you lose. I say presumably because I never actually did run out, but that’s usually how things go in these wars among the stars. Your main goal is usually to take down a certain percentage of enemies, so your focus should be on shooting, shooting, and shooting some more. 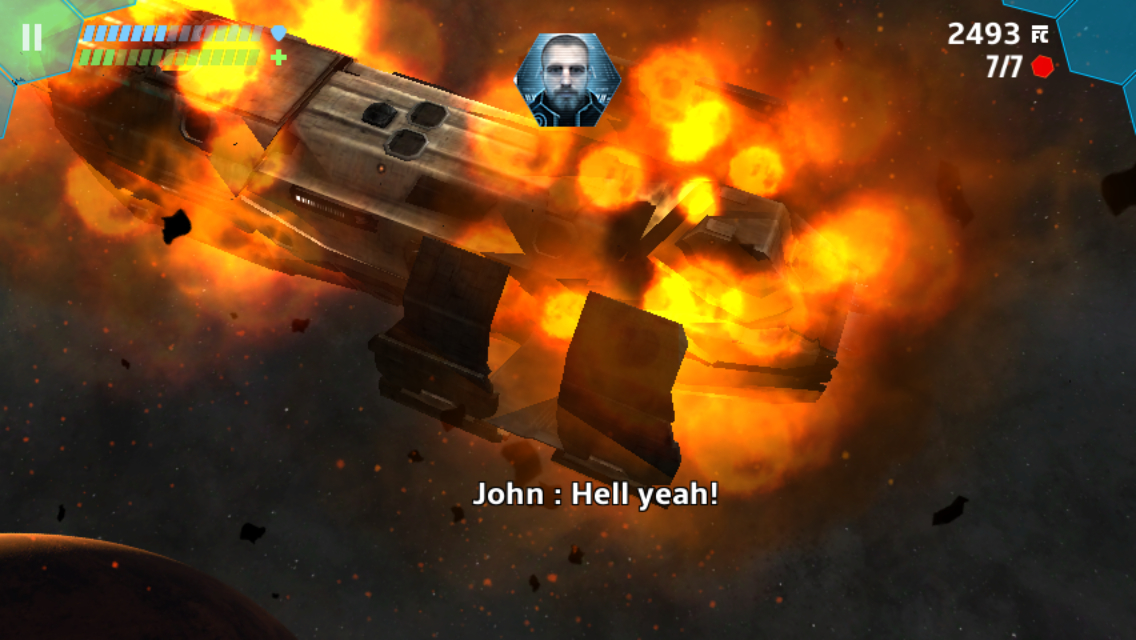 You’ll earn Federation credits as you play, and between levels, you can use these to power up your weapons or ship armor. There are only a couple of upgrades for each, and you’ll earn more than enough credits by the end of the game to upgrade just about everything to the maximum, if not all of it. There are no IAPs in the game, so if you want to fully upgrade your ship, you’ll have to earn it. The upgrade system, like the dialogue choices, is fairly limited and feels like the vestigal remnants of a much larger idea, but it’s neverthless welcome. It adds a bit to the illusion that you’re playing something deeper than you actually are.

Unfortunately, an illusion is all that it is. Once you’ve finished the game, as you inevitably will, there isn’t a lot of reason to go back, apart from seeing how the other dialogue choices play out and chasing down the achievements for doing so. The leaderboards only keep track of your total credits, and they’ve been hacked six ways to Sunday already. The achievements are almost all story-based ones that you’ll unlock automatically, with the remainder assigned to shooting down a number of enemy ships that you will nearly inevitably reach during the course of a playthrough. Not that achievements are the most important thing in the world, but some clever ones could have been very helpful for a game that is crying for replay value. 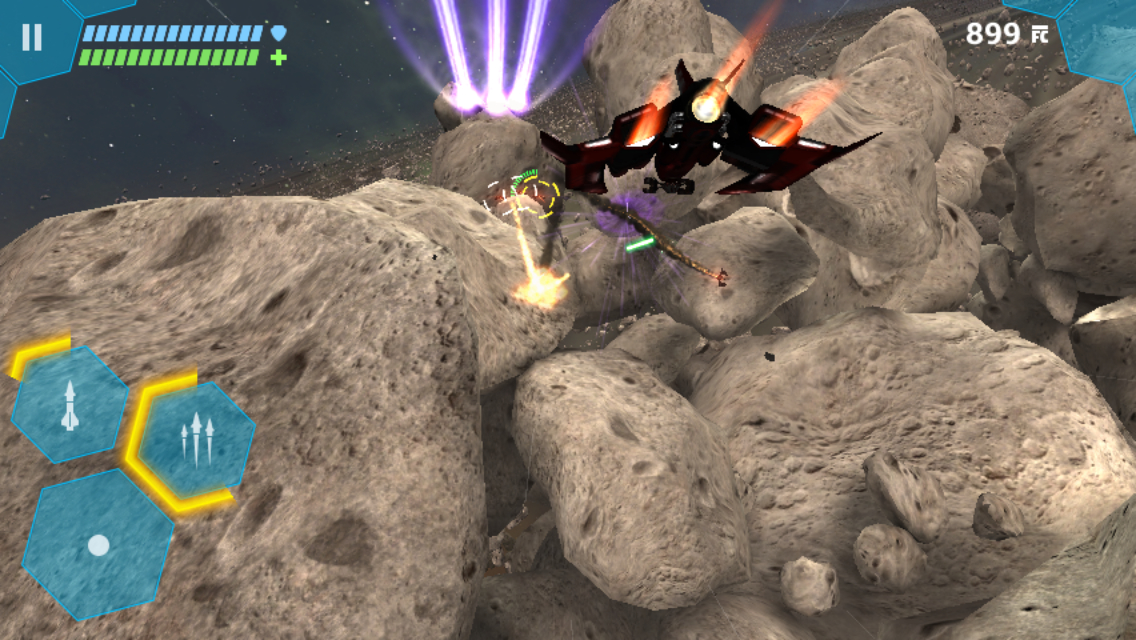 I guess what it comes down to is whether or not you’re okay with paying a flat fee for a gorgeous, cinematic, dutifully polished, sci-fi shooting gallery. It lacks the challenge and variety of most other rail shooters, so you’re really in it for the story and presentation. If you really enjoy that story, you might have a reason to revisit the game from time to time, but I think for most, Star Horizon is just going to be a beautiful trifle. Like the dark rides I mentioned in the opening paragraph, I think the first trip through is very enjoyable, but it’s not really something you want to keep doing over and over again. It’s an impressive hour and a half, particularly for your eyes, but I’m not sure if that’s going to be enough for most.