The original Block Fortress ($1.99), from the good folks at Foursaken Media, was one of the roughly 86 million Minecraft ($6.99)-inspired games that came in the wake of its success. More importantly, it was one of the roughly five Minecraft-inspired games that weren’t awful. It was a really cool fusion of FPS, construction, and base defense, with each element working almost perfectly in combination with one another to create a compelling new take. Block Fortress: War ($1.99), the new spin-off, also attempts to fuse genres. This time, it’s a bit of RTS, a bit of tower defense, a bit of MOBA, and, of course, a hearty helping of the construction genre. That’s a lot of plates to keep spinning at one time, so perhaps it’s no surprise that things don’t work quite as well as you might hope.

Befitting a spin-off, this is a very different style of game from Block Fortress. The phase-based system of building up your fortress followed by going into first person view to defend it isn’t found in War. Instead, true to the name, you’ll be waging battles across the Blockverse from an aerial third-person view, with the goal being to destroy the enemy’s base on each map. Scattered around the maps are resource points which can be secured by your hero. Doing so will give you a specific amount of resources which you can then spend on defenses and turrets that can be built in the immediate vicinity of any points you control. The strategy varies from map to map, and on some of them, you’re better off just going for the throat, but generally speaking, you’ll want to secure resource points, build up some back-up to support grabbing the next resource point, and repeat until you’re at the enemy’s front door. 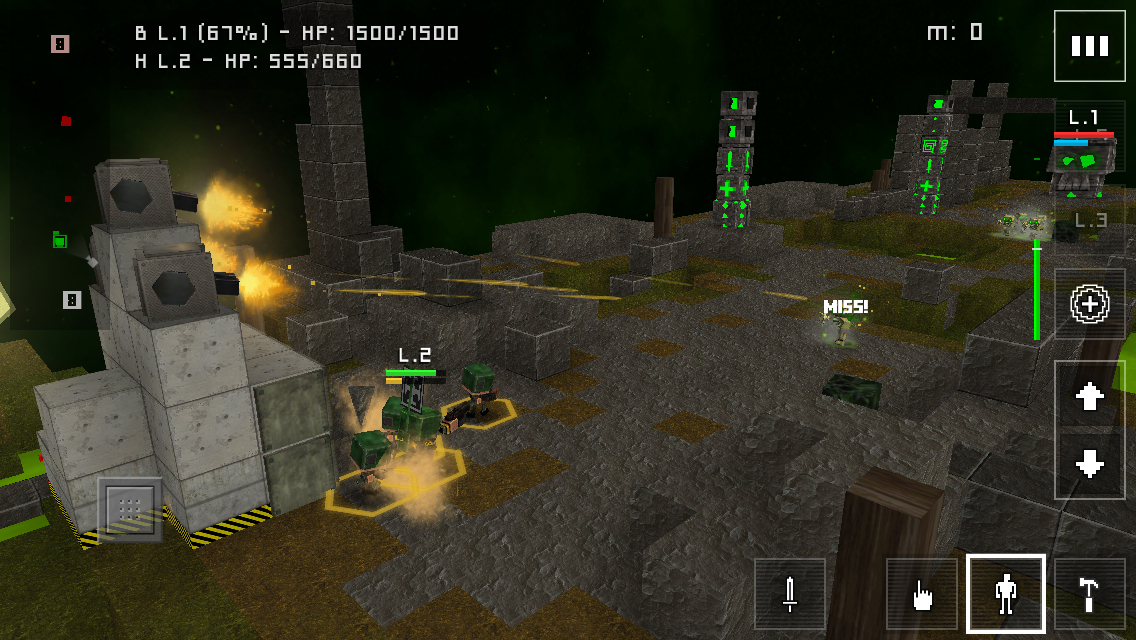 Successfully completing a mission earns you some cash that can be used to buy more powerful weapons, turrets, and heroes. Almost everything is reasonably priced except for the heroes, who are a bit pricey at the moment, nudging you towards the inevitable IAP. Still, you don’t need the other heroes to win, so it’s not that much of a problem. As you play, you’ll also unlock different block races to play as, offering different stats and abilities. To unlock each race, you have to conquer their planet with an escalating number of other races. If you don’t feel like doing that, or can’t, you can use the cash you earn in-game to unlock a race whenever you want, but the price on that, in terms of in-game currency, is very steep indeed.

Still, I can imagine some people doing it, simply for one reason: this game is actually pretty hard at times. Your resources are very limited, so mistakes can be very costly. If an enemy manages to destroy something, it’s gone, and those resources will not be replaced. If it manages to destroy the resource point itself, that point is not only out of play for the duration of the round, but all associated turrets will stop working. Since you have a hard limit on what you can spend, the more challenging levels are more like puzzles that need to be solved than typical RTS battles. This is a viable way to go with a strategy game, if not always a popular way. It can be immensely satisfying trying to find the best route to victory in a carefully-designed trap. Unfortunately, the solution to the puzzle in Block Fortress: War usually involves the exact same strategy: build some really tall towers and put your best guns on top.

There are a few exceptions, but most of the maps in this game reflect a corridor-style design. It’s great for forcing encounters, but it’s a real buzzkill for strategy. The maps that try something a bit more open show promise that makes the general reliance on hallways even more disappointing. All of this working together creates a strategy game where many attempts to use actual strategy will result in failure, while general exploits work very well. Once you’ve found an exploit, you probably won’t even want to risk trying tailor-made strategies anymore, since the missions are sometimes quite long, a small mistake can cost you the whole battle, and you get relatively little return for failing. The game opens up a bit more once you can play as the other races, but the journey there isn’t very satisfying.

A lot of this goes away if you’re playing multiplayer. Block Fortress: War supports up to four players divided into two teams. You can play locally or online, and while I didn’t have the chance to try the local play, the online mode worked pretty well. In multiplayer, resource points aren’t destroyed when the enemy takes them out. Instead, they’re simply restored to their original state and can be claimed by either party. Furthermore, rather than giving you a finite lump sum of resources upon capturing the point, the game instead continuously gives you resources for each point you control. I can see why the developers didn’t use this rule set in single-player, since you could pretty much brute force your way to the end, but man alive, it’s a lot more fun to play this way. On top of all that, since you’re playing against a human, you actually have to use some strategy, as opposed to just finding a loophole in the AI’s logic. 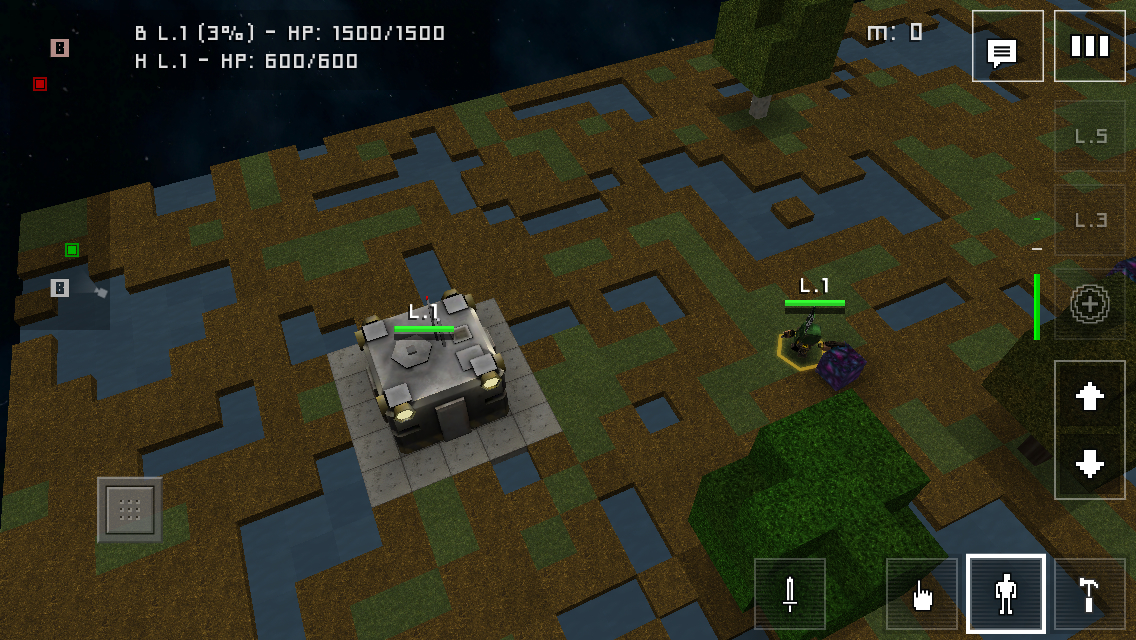 My only issue with the multiplayer is that you only have access to what you’ve unlocked via the single-player campaign, so you can run into opponents who will eagerly do their impression of Joey Chestnut with you playing the part of the hot dog. Again, I can see why the developer did this, because it gives you incentive to complete the single-player campaign, but it introduces an unsavory element of pay-to-win that leaves a bit of a bad taste in my mouth. Don’t even bother ducking your head out online until you’ve unlocked the Blockoids, really. Playing with people you know can mitigate this imbalance, of course, so if you’ve got some like-minded friends, it’s full steam ahead.

Seeing everything work fairly well in the multiplayer mode really makes the single-player campaign’s failings stand out. Block Fortress: War has a lot of great ideas behind it, and when it’s working, it’s completely awesome. The balance is off, to be sure, but the foundation is all here. Different turrets serve different purposes, and the equipment limitations on your peons forces you to carefully consider what purpose you hope to achieve with them. Taking into account the different races and unlockable heroes, there’s a lot of potential depth to be mined here. As it stands now, there are considerable issues with balance that seem to be leading to players online using a very narrow range of strategies, but given their past record, I’m willing to give Foursaken Media the benefit of the doubt that they’ll update this game into fine shape on that end. The single-player mode needs a serious rethink, though, because right now it’s more negative than positive. 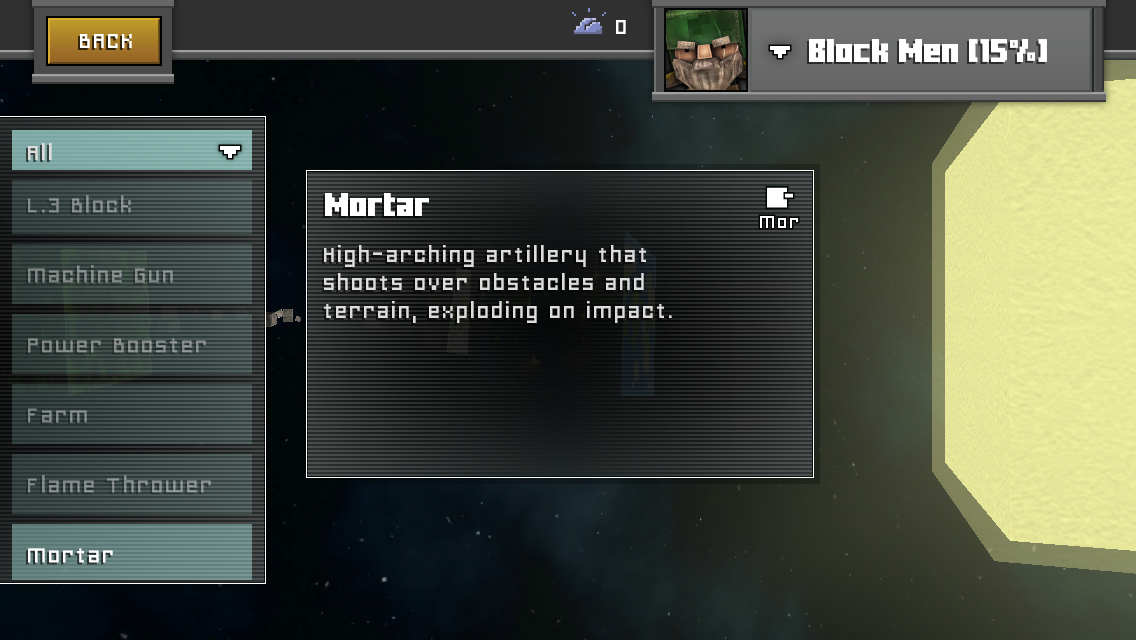 Foursaken’s games usually have nice presentation, and Block Fortress: War is no exception. The graphics are blocky, but they’re very sharp and look quite good in that Minecraft sort of way. The music and sound effects are nicely done, and the controls work reasonably well most of the time. It takes a bit of adjustment before you’re able to do things as quickly as you might need to, especially in the multiplayer mode where you can’t pause while building, but I can’t think of a better method than the one they’ve used here. The UI is a bit more ungainly than it needs to be, but it works well enough once you’ve put in a bit of time. Game Center support is in for both leaderboards and achievements, with individual boards for each race as well as an overall board.

At present, I can only strongly recommend Block Fortress: War on the back of its multiplayer mode. If you have no interest in multiplayer, I’d give this one a pass for the time being. If you’re interested in that side of the game, I think you’ll be pretty happy with the game as it stands so long as you realize you’re going to have to either buy some IAP or spend some time with the less enjoyable single-player campaign mode in order to unlock what you’ll need to be competitive. I’ve no reason to doubt this game will be improved with updates, but as it stands right now, it’s going to need a fair bit of work to fully realize the fantastic potential laying tantalizingly just out of reach.