The Winter Games may be behind us for a few more years now, but Old Man Winter’s grip on the Northern Hemisphere seems to be holding strong. With flaky white stuff inevitably on the minds of more people than just the usual dandruff shampoo marketing executives, we’ve been seeing lots of great games that take place in or around snow. Not long ago I reviewed SuperPro Snowboarding (Free), which called back to the Tony Hawk era of extreme sports video games, albeit from a 2D perspective. Cubed Snowboarding ($0.99) takes things back a bit farther, with a feel more reminiscent of 8-bit computer sports games. Rather than trying to stuff in all of the intricacies of the sport, it gives you a limited and somewhat simple moveset, a mountain full of increasingly difficult courses, and a challenge to get the highest score you can in a single run of the whole sequence.

The game asks you to run the full mountain of 10 courses to determine your total score, and though you can reset your whole run from the bottom of the mountain at any time, you can’t get a do-over on individual courses. If you mess up, well, better luck to you in the future, but the next course awaits, and with it, a chance to redeem yourself. This aspect of the game might rub some the wrong way in our modern world of quick resets and save states, but personally, I really like it. Running the whole mountain doesn’t take very long, so time isn’t a serious issue, and the chance that you could blow your whole run at any point adds an important level of tension to the game. If you want a high score, you have to push your luck, but the risks of doing so are real. 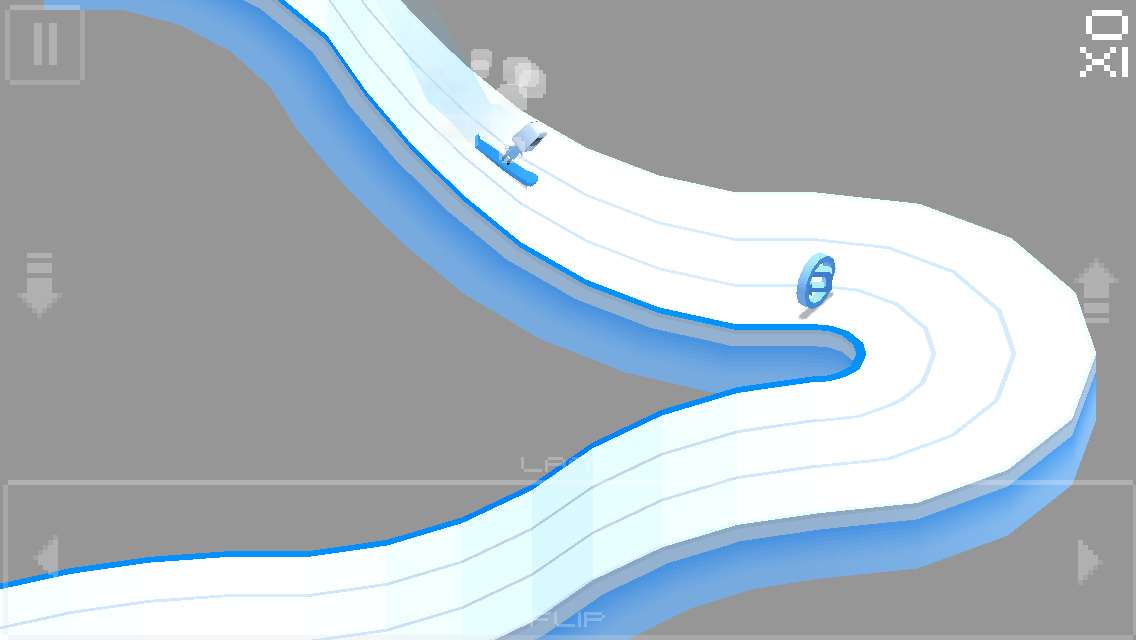 Each course starts you off at the top of a three-laned slope that winds left and right until culminating in a goal platform. At minimum, you’ll want to arrive to that platform in one piece, which means you have to avoid face planting and make every turn. Making turns is a simple matter of being in the correct lane to pick up a turn icon. Once you hit it, you’ll make a perfect little turn and be onto the next part of the track. The whole “avoiding face planting" thing is largely a matter of making sure you switch lanes before colliding with any trees, stones, or the like. If you can do those two things, you’ll get to the finish line. Your score won’t be very impressive, though, unless you make frequent use of your ability to flip. There are other ways to rack up points, depending on the course, with some of them featuring rails you can grind, for example, but those, too, are a matter of being in the correct lane. Flipping is the risk, and it’s what separates the meek scores from the mighty.

The controls are kind of a complicated issue. The day I wrote this review, an update arrived that dramatically changed the controls of the game. The original controls had quite a bit of character to them, but I think the game is a lot easier to enjoy with the new controls, even if it loses some of its uniqueness. The screen is basically divided into four areas, with the upper left and right areas dedicated to switching lanes and the bottom left and right used for flipping. In the original control set, the direction of your lane switch was relative to your boarder. The right side of the screen would move the boarder one lane to the right from his perspective, while the left would do the opposite. Flips were also relative to the boarder’s point of view. Since the game is viewed from the side, this meant that depending on which direction the boarder was moving in, touching the same area would have a different result. It was really confusing and hard to wrap your head around, but in a way, I think it was kind of an interesting exercise. 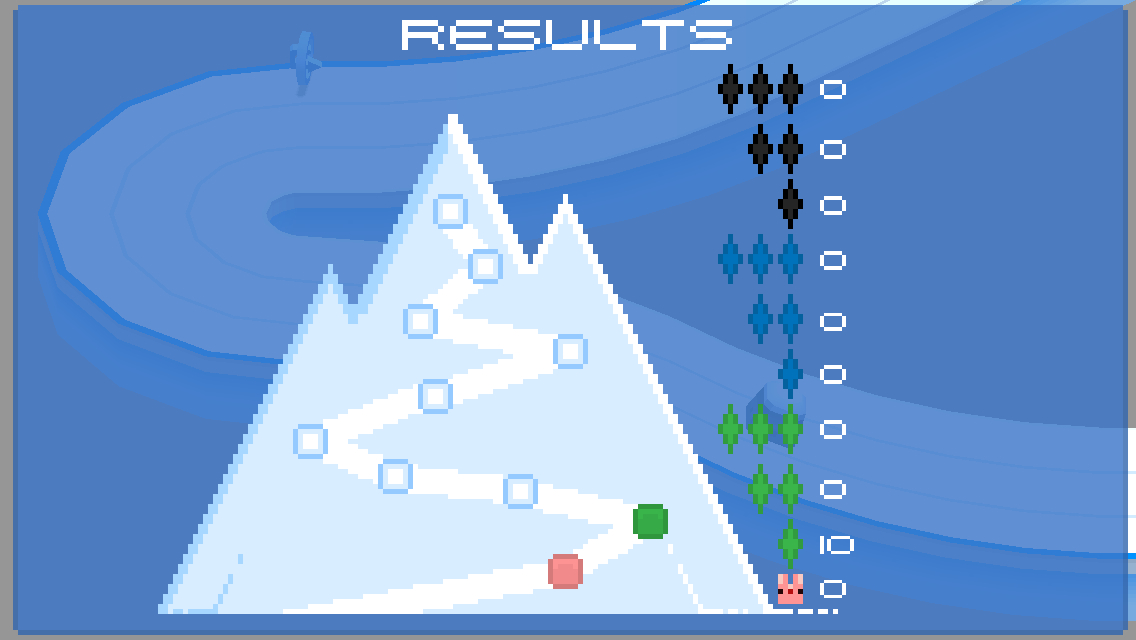 The new controls switch the left/right idea for a more direct up and down lane switch that doesn’t change regardless of which way your boarder is facing. It’s a lot easier to play, and it cuts down considerably on screw-ups, allowing you to focus on racking up your best score and handling the obstacles in a more traditional way. Still, I know some people in our forums preferred the original controls, so I think it would have been best if both sets of controls were made available, even if I think the new controls result in a far better experience. Once you’re a few courses into the mountain, there’s more than enough going on to keep you busy without having to try to put yourself in your boarder’s boots the whole time.

Cubed Snowboarding has a clean, simple look to it. It’s a lot of white, as you’d expect from the subject matter, and partly owing to that, obstacles stand out nicely against the backdrops. The animation on your boarder is quite smooth, though you probably won’t get a chance to fully appreciate it given the speedy pace of the game. Music is limited to a little jingle that plays at the beginning of each course. Retro-styled sound effects pepper the action, but it’s safe to say this game isn’t an audio tour-de-force. As mentioned before, leaderboard support through Game Center is implemented, so you can compete for your best total score against other players. Sadly, there aren’t any Game Center achievements, so you’ll just have to be satisfied with a high score, gaming’s original achievement. 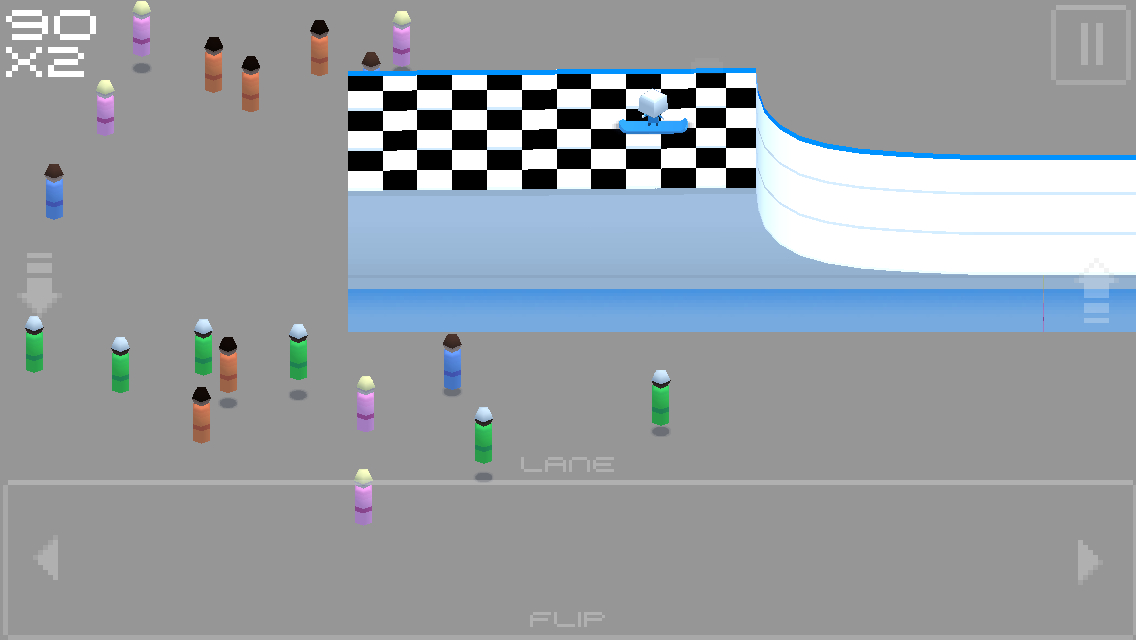 There’s not much more to the game than that. It’s a bit of a trifle, especially compared to more meaty games of the genre, but if you’re into score attacking, you’ll find a lot of depth in mastering Cubed Snowboarding. Its old-school focus on skillfully completing a sequence of challenges in one attempt over the modern approach of safely conquering them in bite-sized chunks makes it stand out a bit in today’s gaming landscape. I don’t think it’s a better snowboarding game than SuperPro Snowboarding, but it’s offering something a bit different that I think has its own appeal. If you’re snowed in and not completely snowed out on winter sports, it’s worth a bit of your time.