Not long ago, word got out that Square Enix would be releasing a new, free-to-play mobile installment in their long-running Seiken Densetsu/Mana series, which fittingly got its start on the most popular handheld gaming device of its day. Reactions were mixed, to say the least. There’s a lot of fondness for Secret of Mana ($7.99), and it speaks to the depth of that fondness that even after 20 years of failing to repeat its success, people still hang onto hope that Square Enix can deliver a similar experience again. Well, since Rise of Mana has released in Japan, I’ve sunk a bit of time into the game, and I don’t need to tell you that it isn’t that game. In truth, Rise of Mana appears to represent Square Enix’s latest attempt to grab onto the success of Gungho’s popular Puzzle And Dragons (Free). Still, I think if you can take the game on its own terms, you might have something to look forward to here. 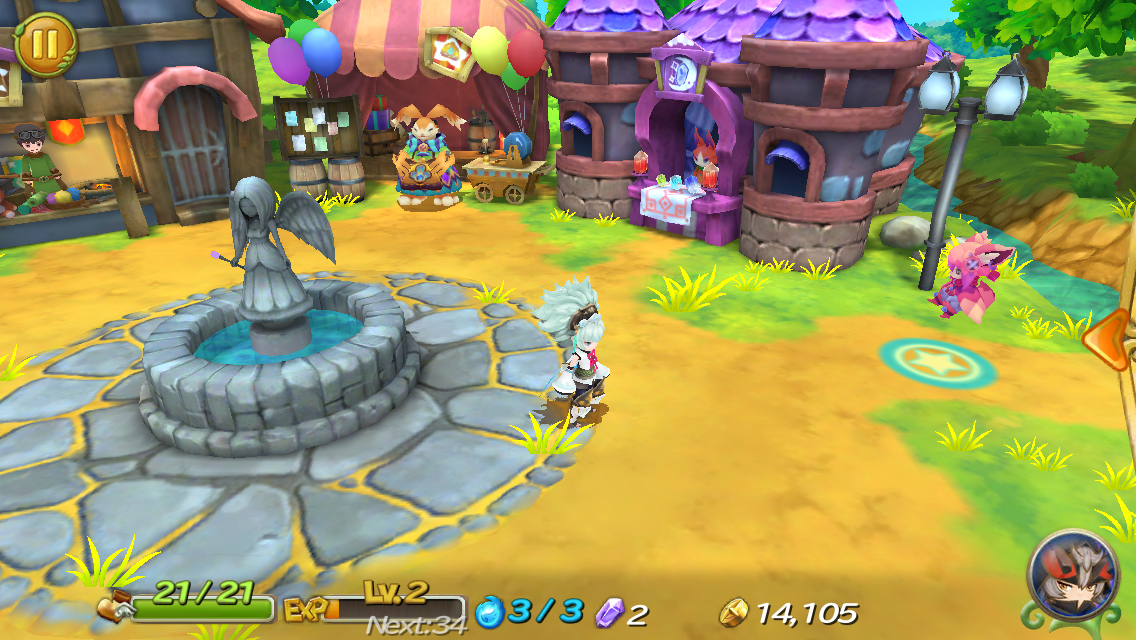 The first thing I noticed when I started to play is how good this game looks. Square Enix didn’t cheap out here at all. The colors are vibrant and the characters are quite detailed. You even get a pretty good cut-scene to set up the story. The forces of Light and Darkness are locked in a battle that has gone on for ages. The Champion of Light confronts the Champion of Darkness in front of the Mana Tree, and in their struggle, they fall over the edge and end up in the mortal plane. As their powers are greatly reduced away from their home plane, they decide to join together and share a body. They soon come across a village that desperately needs their help.

When you start the game, you can mix and match male and female versions of both Light and Dark, but it doesn’t seem to make any difference in gameplay. The action takes place in small, sectioned off stages that you can explore by tapping around or dragging your character. You can switch your active character at the tap of a button. As you explore, you’ll occasionally stumble across enemies, who you attack simply by tapping. There’s a special attack you can perform by switching characters at the right time, and some special moves can be performed both through your weapon and your familiar. Pretty shortly into the game, you’ll get your first familiar, a little helper creature that follows you and assists you in battle. Combat is a lot of frantic tapping, with a bit of evasive action, particularly when fighting bosses. In case you were wondering, the swing fatigue system from other Mana games is not used in this one. You can attack like crazy without penalty. 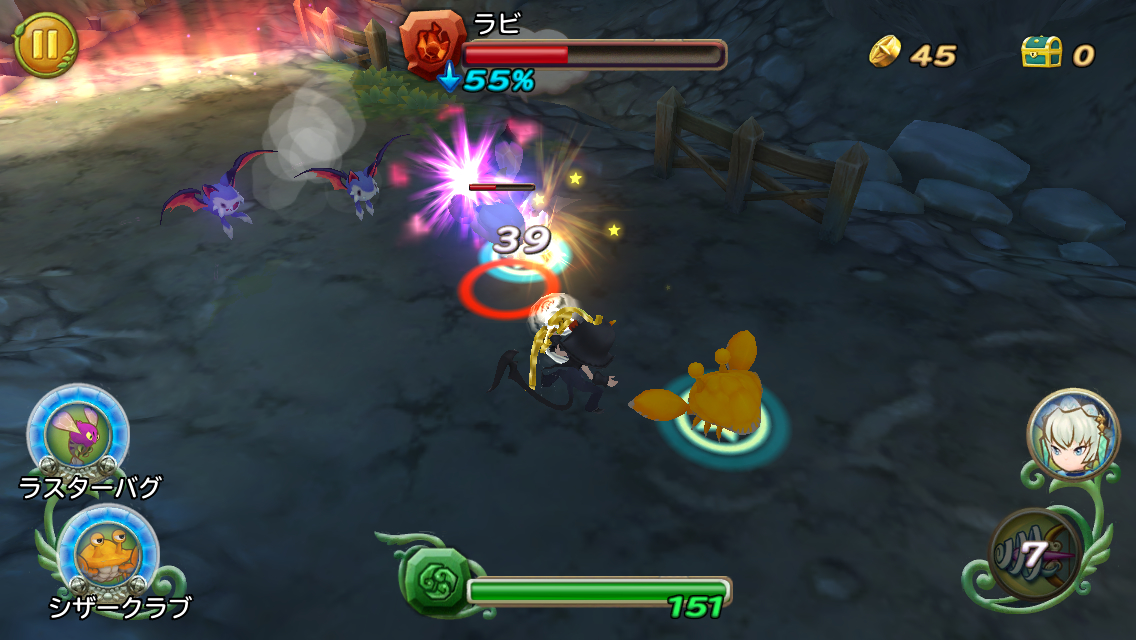 Once you’ve found the village, the actual game is revealed, and it’s got a lot of things in common with other free-to-play RPGs from Japan. You can walk around the village and talk to people, which sometimes reveals new quests. In your character’s room, you can check your messages and set your weapon and familiar. There’s a message board in the town that acts as a hub for the game’s social features, like your friend list. There are also a few shops in the town that perform the usual functions seen in a game like this. You can fuse and evolve your weapons or familiars using coins, use friend points or gems to pull a random new weapon or familiar, use gems to increase your inventory space or refill your stamina meter, or buy gems with real money. Stop me if you’ve heard this before.

If you leave the town, you’re presented with a map showing the different places you can go. Each location has a list of missions that will expand as you complete other quests and talk to people. Taking on a quest uses up some of your stamina meter, which will slowly refill as real time passes. Once you’ve selected a quest, you can choose a friend’s familiar to bring with you to bolster your strength. After that, you’ll be transported to that stage, where the action takes place. Each quest lasts for a set number of battles across a set number of screens. You have some freedom to walk around outside of battles, but apart from a few items scattered around, there’s nothing of interest except the main path. When you defeat an enemy, you have a random chance of finding new familiars or treasure chests containing new weapons. If you successfully finish the stage, you get to keep all the loot you find, otherwise, you lose it all. There’s a pretty good variety of weapons and familiars to find, though the best stuff is quite rare, of course. 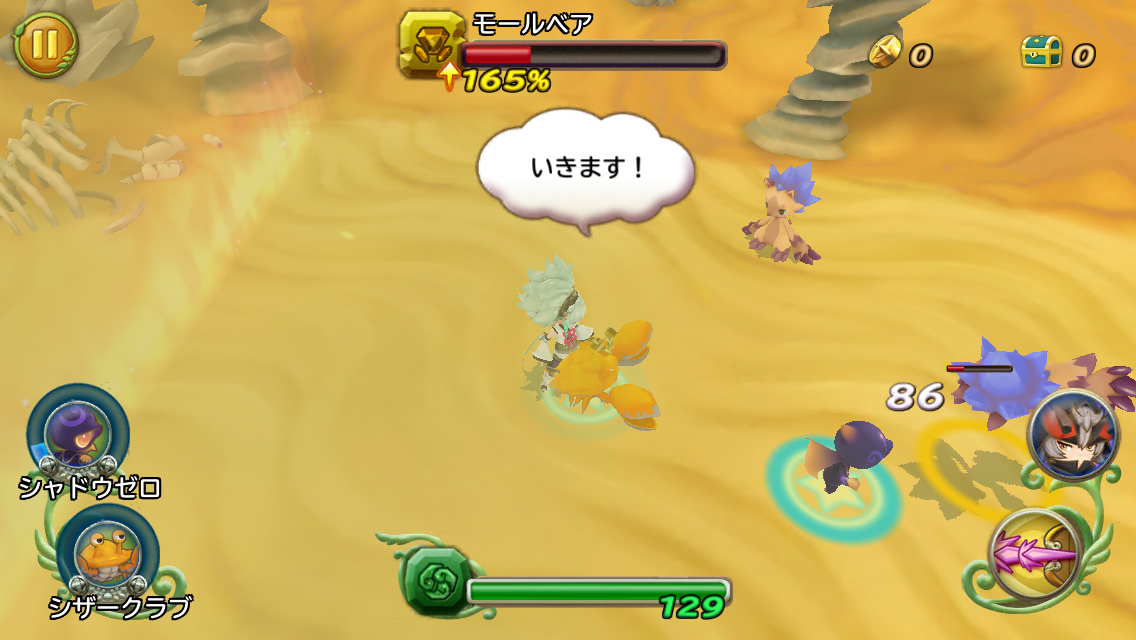 The weapons play pretty differently from each other and require slightly different strategies. You’ll want to match your weapon with your familiar. A bow makes a good match with a beefy, in-your-face Mimic familiar, while you might want to get up close and personal with a sword if your familiar is more of a ranged attacker. You’ll need to make sure you’re feeding spares to both your weapon and your familiar to keep their levels up to snuff. That end of things is pretty much Puzzle And Dragons on the nose. Being able to mix different weapon types with different familiars adds an extra layer of variety to the formula, at least.

It merits saying again that the game is absolutely beautiful. The areas are fairly small, but packed with little details and positively blooming with the organic style that permeates even the less-celebrated Mana games. The music is also exceptional. I play a lot of games that chase the (Puzzle And) Dragon, but none of them have had presentation on this level. I’m not sure how the story is going to play out, since I’m still early on, but there seems to be a bit more of a narrative than games of this type usually offer up. Simply having a full village with people in it commenting on things puts it a step above the standard menu-based approach most take. 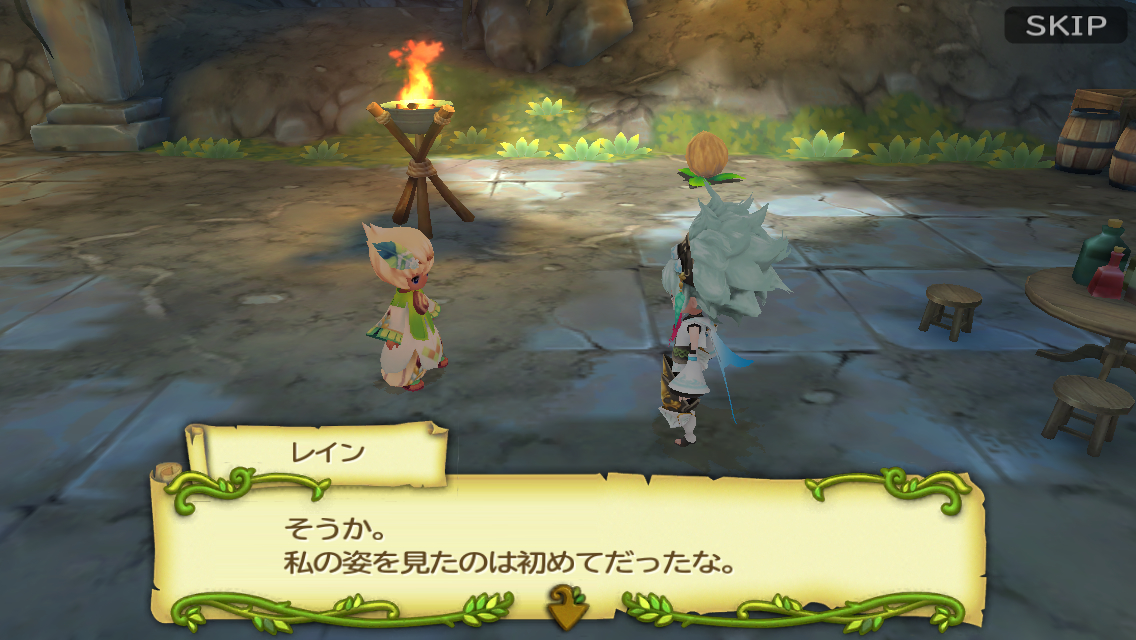 Of course, we’ll have to see how generous Square Enix is with gems to really see how Rise of Mana works out. I was pretty enamored with Final Fantasy Pictlogica initially, but Square Enix’s stinginess with premium currency and characters caused me to get bored fast. I hope the same fate doesn’t befall Rise of Mana, because it’s actually pretty fun, and if its economy ends up something like Puzzle And Dragons, I’ll be quite happy with it. It’s not Secret of Mana, but as a Mana series take on the latest craze sweeping Japanese gaming, it’s worth keeping an eye on. Hopefully, Square Enix isn’t just trademarking names for nothing again, and English gamers will have a chance to check this one out sometime in the future.