Making a traditional shoot-em-up out of the Star Wars license is such a great idea that you just know something had to go wrong. A curious spin-off of a spin-off series, LEGO Star Wars: Microfighters ($0.99) seems to naturally have its sights set on the younger Star Wars fans. It’s about as basic a vertical shooter as you could imagine, with little of the imagination one would associate with the LEGO franchise. In and of itself, there’s nothing wrong with that, especially considering the heavy debt the shooter genre owes to the original films, but the end result is a fairly unremarkable game that isn’t even packed with much fanservice, leaving it without the usual last resort many Star Wars games have had to retreat to.

It starts off promising enough, allowing you to choose between the light side and the dark side of the force. This gives you two separate campaigns spanning the periods of time covered by the movies, each with their own player vehicles, stages, and enemies. Whichever side you choose, you’ll have to play through the stages based on the prequel trilogy first before you can unlock the stages everyone cares about. There are six stages based around Geonosis from the prequels, with the remaining dozen stages taking place on Hoth, Yavin, Endor, and the Death Star. Each stage caps off with a boss fight, though there are only eight different bosses, so you’ll be fighting some of them multiple times. 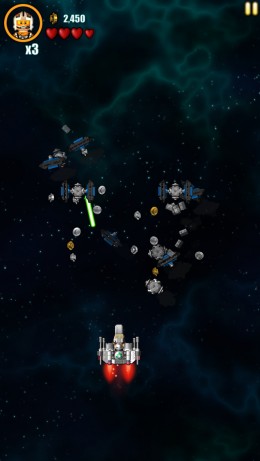 Not that the stages matter all that much. Most of them simply offer a new paint job for nearly the exact same series of challenges. The trench run on the Death Star makes a valiant stab at trying to differentiate itself and capture at least something from the movies, but the rest of the stages are pretty content to offer you the same slowly-scrolling shooting gallery, complete with enemies sharing behavior patterns. Whether they’re X-Wings or Tie Fighters you’re shooting down, they’ll still come in the same way, in the same patterns, firing the same kinds of shots. Shoot them down, collect your studs, move out of the way of their ridiculously slow shots, and repeat until the stage is finished.

Much like the stages, there’s no practical difference between the different player-controlled vehicles. The Clone Tank behaves exactly like the X-Wing or Star Destroyer. The only real difference is the color of your shots. The vehicles power-up in a similar way, too, with each collected kit increasing the width and overall power of your shots. In addition to the studs and kits, you can also collect hearts, which restore some of your life meter, and Power Bricks, which are used to unlock the game’s boosters. Once you’ve collected the appropriate amount of Power Bricks, you can then use your studs to buy any of the boosters you’d like before each mission. Unless you’re pretty terrible, you can usually leave with a full load-out of boosters and still come out ahead in studs by the end.

You have four hearts on your life meter initially, though each hit usually only carves off half of a heart, meaning you can take eight hits by default. You also have two extra lives, so if you do run out of hearts, a few quick taps will have you back together again exactly where you fell, probably minus one power-up if you’re not fast enough. Once those lives are through, if you run out, you’re finished, but you get to keep any studs you’ve earned, as well as any Gold Bricks or Power Bricks. It’s a very forgiving game, making it pretty easy to clear, but even this isn’t exactly the problem. After all, you can credit feed your way through DoDonPachi Blissful Death ($2.99) if you really want to and still have a good time. 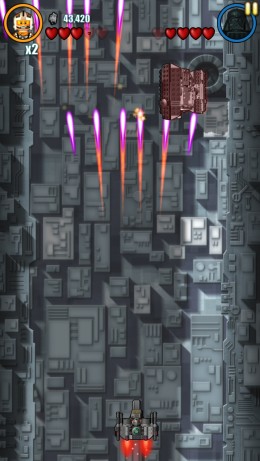 The real problem with Microfighters is just how slow it is. Enemies are slow, the backgrounds scroll slowly, the enemy shots are slow, your ship is slow. Explosions lack impact, and enemies are just a little bit too bullet spongey. Combined with the almost perfectly predictable patterns the enemies take in every level and the lack of any new attacks, the entire game just feels plodding and dull. That’s a pretty hard trick to pull off when I’m controlling the Millennium Falcon, shooting lasers at Tie Fighters over the Death Star with the music of John Williams booming in the background, but here we are. If I had to guess, this is probably a consequence of a misguided attempt to appeal to kids. Admittedly, I haven’t been a kid in a really long time, but I don’t remember “slow and easy" being high on my list of desired features for a video game.

It doesn’t help matters that the game looks pretty bad, in spite of being a bit resource-intensive. Enemies blend in with the backgrounds far too easily, and everything just has a cheap feel to it, like they just recycled as much as they could from LEGO Star Wars (Free) as inexpensively as possible. The few cut-scenes in the game are genuinely horrible. It looks like they took pictures of the actual toys or the packages, pinned them onto some game backgrounds, and are just zooming them in and out where needed. Compared to the work done in the proper LEGO Star Wars games, this stuff is embarrassingly low-rent. The music and sounds seem to be sampled from the proper sources, so the game sounds fine, and there’s no IAP in the game, even though there easily could have been. Don’t go looking for anything Game Center related, though. These aren’t the options you’re looking for.

I still say the concept has serious potential, but LEGO Star Wars: Microfighters isn’t the game to achieve it. It’s a shooter that’s boring to play, which is a terrible position to be in on iOS. There’s an embarrassment of riches for anyone looking to have some fun with this genre on the platform, leaving little room for half-hearted efforts like this one.