It’s been more than three years since the generally well-received Ys/Zelda mash-up action RPG Across Age ($3.99) was released on the App Store. It was a surprisingly well-done adventure, developed by frequent Kemco collaborators EXE Create, that used a simple time travel mechanic to make it stand out. Well, we finally have a sequel, and in spite of it being rather a long time coming, it’s more refinement than revolution, delivering an experience that’s a little bit too familiar in many ways. Still, there’s a great time to be had here, especially if you enjoy the genre.

After the events of the first game, it seemed like everything turned out okay after Ales and Ceska defeated the evil Count Agraen and destroyed the Water Clock, repairing the damage done to the past. Sure, nobody remembered what they had done, but things wrapped up in a very neat Back to the Future kind of way. Whether it’s coincidental or not, Across Age 2 ($3.99) takes things very much in the direction of Back to the Future 2, with our heroes meeting up with a traveler from the future who informs them of a situation personally involving them that they just have to investigate themselves. This sets up another time-hopping adventure through dungeons, castles, and monster-filled fields. Personally, I can’t wait for Across Age 3. I love westerns. 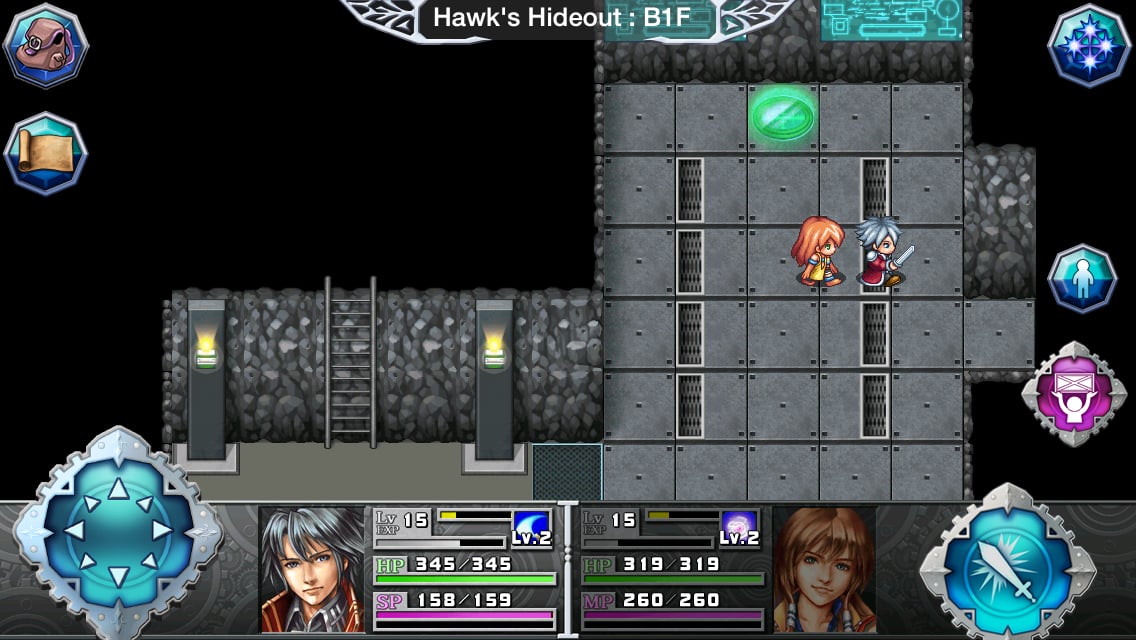 Like the first game, Across Age 2 is an action RPG with puzzle elements. Enemies litter the various places you’ll explore, and you’ll fight them in real time using the skills of your characters. Like in the first game, you’ll often have two characters in your party, and you can switch between them as you need to. Returning from the first game are Ales, a swordsman who in addition to his skill with his blade is also good at moving heavy blocks and throwing women, and Ceska, the mage who can zap enemies from a distance, use her spells to solve puzzles, and time travel using special portals. Fortunately, Ales begins this game with a ranged attack skill, so you won’t have to fumble around taking hits from being in too close as was the case for the early part of the first game.

Joining the returning characters are two new playable characters, Violet and Lily. You’ll remember Violet from the first game, but Lily is all-new. They technically bring different methods of attack to the table, though they share many of the same special abilities as the original pair. They’re more there to service the plot than for actual gameplay differentiation, in my opinion, but it’s still a nice change of pace anyway. I’m still not real keen on the characterization of Violet, and having him in the party just gives him more opportunities to carry on his embarrassing stereotype routine, but there’s no question he’s a different sort of character from the stoic Ales.

Even with these new characters, you’ll find things play out pretty much as they did before. There are only a couple of new abilities between the whole lot, and while the puzzles are new, since the toolset is largely the same, nothing really new comes into play very often. It’s a heaping helping of more of the same. It’s something I’m fine with, as I felt like Across Age stopped well before I was tired of it, but it’s something to keep in mind if you’re looking for something more grand than that. Even the length of the game is about the same, with the dozen or so hours of play flying by just as fast as the first game thanks to a zippy pace.

On a more disappointing level, most of the areas you visit in this game are just slightly remixed versions of the same areas that were in the first game. It’s really odd that after this much time there’s so little new material here. I know EXE Create haven’t been working on this and this alone the whole time, but the average Mega Man game is less of a rehash than this is. Apart from being updated to fit the larger screen of the iPhone 5 and having MFi controller support, I’m actually hard-pressed to find any differences between this game’s engine and the one used in the first. It’s not even a Universal app, offering up two separate versions for iPad and iPhone. This would be more understandable if this were a quick follow-up, but it’s not. 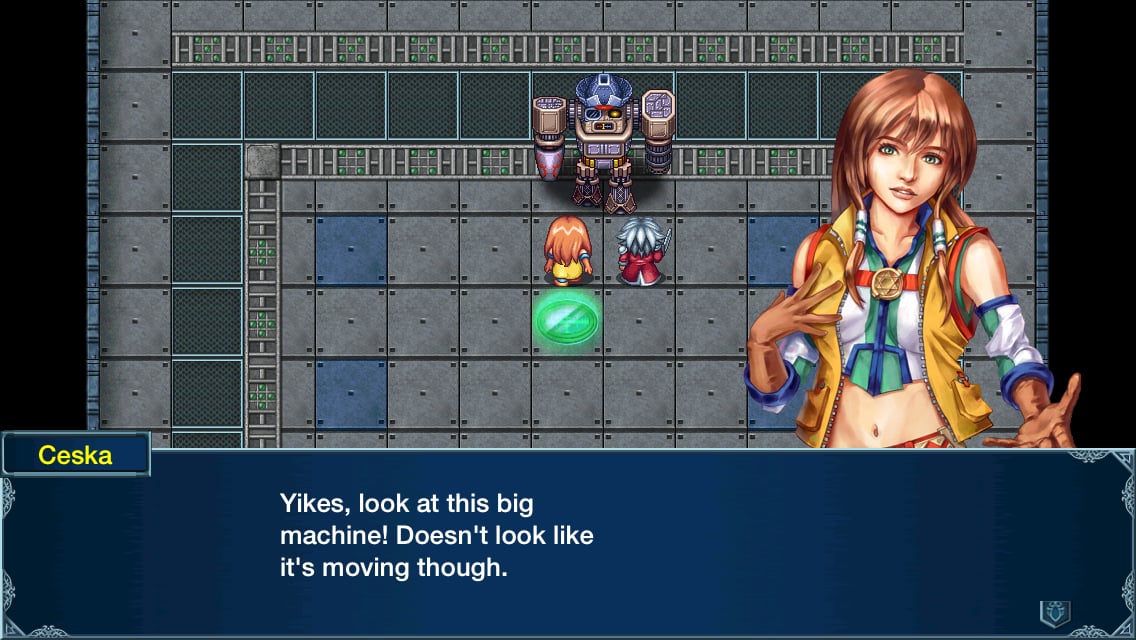 All of this aside, it’s still well worth playing. The story is fun and sometimes surprising, the puzzles are quite well-designed, and the action is fast and exciting. It’s also entirely IAP-free, something that’s getting to be pretty rare in the action RPG genre on iOS. The graphics have that odd stutter that seems to be present in all of EXE Create’s games, but apart from that, everything looks decent enough, even if a vast majority of it is recycled. The music is also largely recycled, but it’s as rocking as it ever was, wearing its Ys influence clearly on its sleeve. There are also some fully-animated cutscenes at key story points in the game, and they look great.

The UI has been given a cosmetic overhaul, and switching characters now uses the far more intuitive system of tapping on their portrait rather than dedicating another virtual button to the job. I found the new directional pad a bit more fussy than the first game’s, but maybe that’s just me. As in the first game, it’s sometimes a bit annoying when you have to switch between skills, since you have to go into a sub-menu every single time you want to do it. 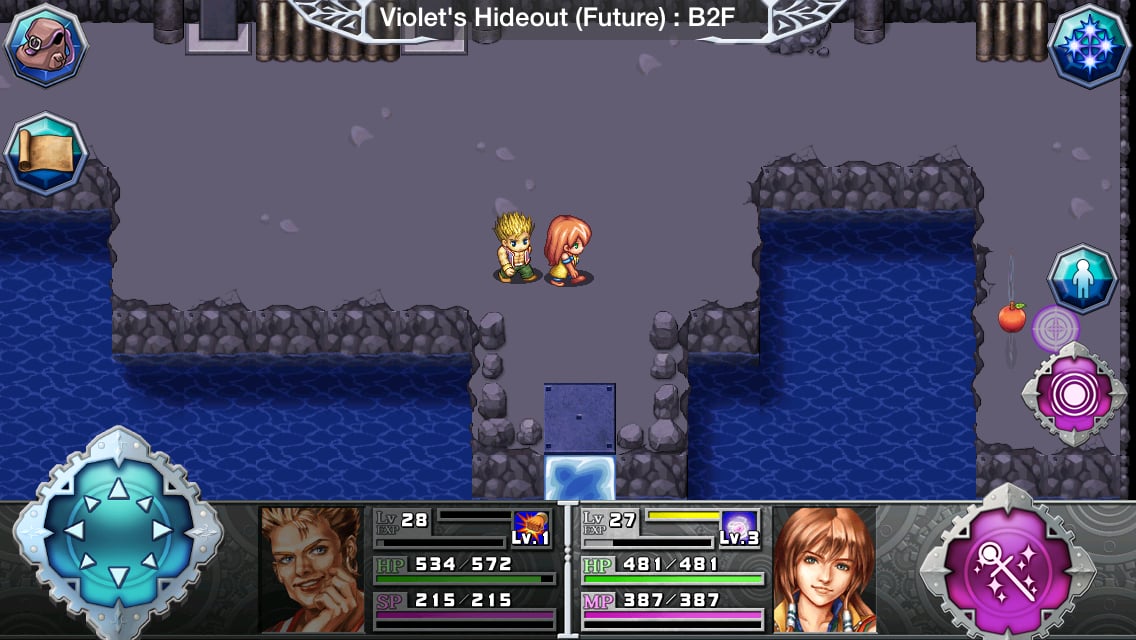 Ultimately, how much you will enjoy Across Age 2 depends on if you’re okay with how little it’s actually doing new. If you’re like me, and you loved Across Age and are thirsty for more, dive right in. This continues the adventure in fine fashion. If you’re hoping for something that would merit a three year wait, well, you’re probably going to be disappointed. If you haven’t played the Across Age games at all, you definitely should, as there aren’t many better action RPGs on the platform. I had a blast going through Across Age 2, but I will admit I spent a good chunk of the time waiting for the game to do something surprising in terms of gameplay only to find it had virtually no intentions of doing so. I certainly hope if there’s another sequel, it comes sooner or with some new ideas in tow beyond a narrative shake-up. For now, this will do.