Like most kids who grew up in the 1980s, I loved Robocop. It was kind of a strange situation, looking back. The movie was an R-rated, ultra-violent piece of multi-layered social commentary, and yet the character was heavily marketed towards kids. Of course, for kids, it wasn’t social commentary, it was a movie about a cyborg police officer with a gun in his leg shooting bad guys and big robots while issuing easily-quoted one-liners. That description sounds nearly as perfect as can be for a video game concept, and yet, Robocop’s forays into gaming have not only been of dubious quality, the IP itself seems to be cursed. In addition to Orion Pictures itself going down the tubes shortly after the wretched third movie, literally every company that ever worked on a Robocop game no longer exists. Perhaps that explains why such an easily-exploitable franchise has been relatively dormant for so long.

Well, whatever fears might be associated with the character must have been set aside, because it’s 2014, and Robocop’s got a brand new bag. There’s a film reboot releasing very soon that certainly seems to feature a cyborg cop, and Glu Games is here with their own Robocop (Free) game to tie in with it. Rather than specially design a game from the ground up around the character, Glu Games has basically reskinned their Frontline Commando (Free) engine with a few minor tweaks. Well, close enough, I suppose. I don’t remember the original Robocop having much use for taking cover behind crates, but maybe this new one is more fragile. At least you’re shooting bad guys and robots, sort of. The premise of the game has you running through simulations, for some reason, so you’re technically just shooting holograms and robots. 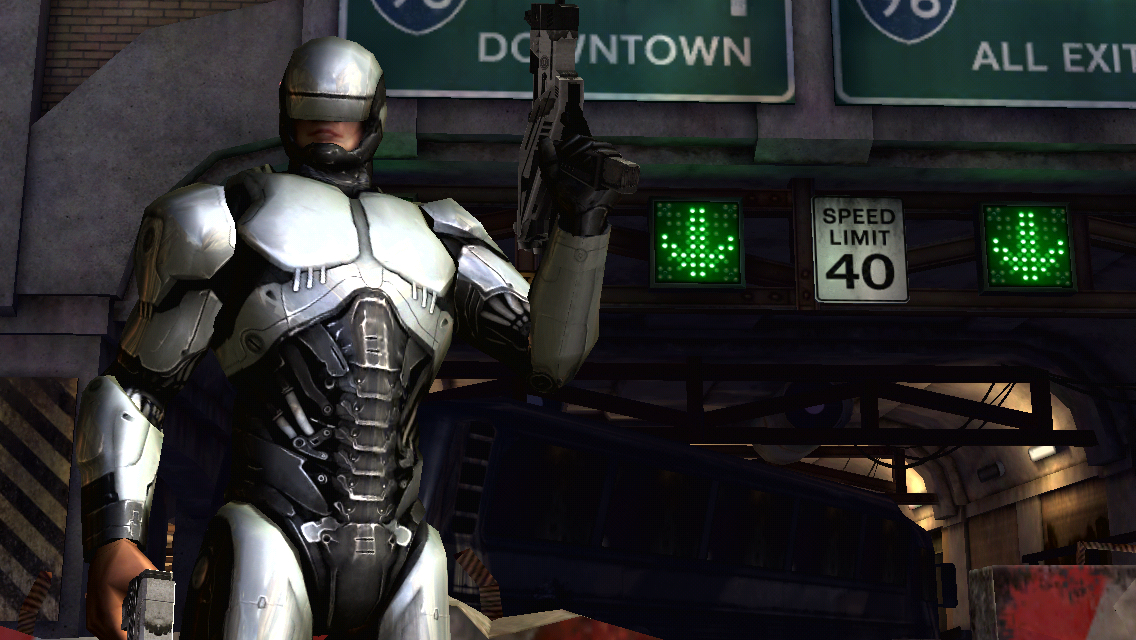 Splitting hairs aside, this game is a cover-based shooter, loaded to the gills with monetization stuff. The game is broken down into missions where you’re required to take out a certain number of bad guys. Clearing a mission earns you cash that can be used to upgrade your weapons and armor, along with some experience points and research points that can be used to help with upgrades. Once you get enough experience points, you’ll gain a level, which earns you a single point of the game’s third currency, gold, which can be used in copious amounts to buy exclusive weapons and pretty much anything else you’d want to buy in-game. The gold is ridiculously expensive to buy, as you’d expect from this kind of game. Playing a mission naturally uses up some energy from your energy meter, which I guess at least kind of fits the character.

The energy meter here isn’t quite as strict as a few games I’ve played recently, but the same problem as usual results. You can play for 10 to 20 minutes, and then you’re either paying up or waiting for the bar to refill. Oddly, the energy meter turns out to not be the biggest showstopper in Robocop, however. The real culprit here is the price of upgrading your gear combined with the necessity of having said upgrades to clear missions. Essentially, there are a handful of different missions that will be open to you at any given point in time. Most of them are story missions and can’t be replayed. They give decent rewards, but they’re also pretty tough to clear without good equipment. There’s also a daily hunt that gives nice rewards and is pretty easy to clear, but can only be played three times per day. Finally, there are challenge stages which can be played on one of three difficulty settings and give pretty poor rewards. 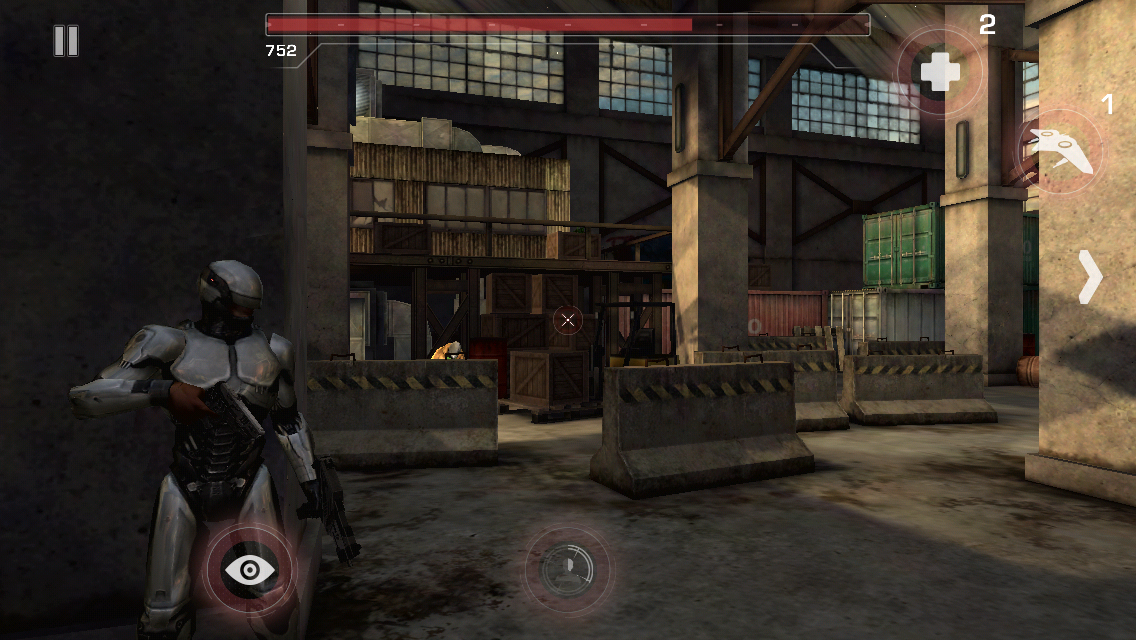 Things go fairly smoothly in the beginning, as they usually do in games like this. Pretty soon, though, you hit a cash crunch. Contributing to that is that your upgrades are laid out on a nodal system, and every so often you need to research to break through to the next group of upgrades. This research costs a fair chunk of money, and success is not guaranteed. You can spend some of your research points to improve your odds, but you won’t exactly be overflowing with them, and the game is opaque about how much they improve your odds. If you have some bad luck, you can lose a ton of cash just trying to earn the right to spend more cash on upgrades. In addition to upgrading your weapon, you’ll probably want to actually buy some new ones at some point as well, and that will cost you dearly.

Essentially, you’re going to have to stop and grind the low-paying challenge missions every now and then, and the gameplay really doesn’t hold up well to that level of grind. It’s decent enough to play, but it gets repetitive fairly quickly. You’ll be in one of a few different set locations, starting in cover. You can use your left thumb to aim from behind cover and your right thumb to pop out and shoot. Your gun can only be fired a certain number of times successively before it needs to cool down, so you’ll have to return to cover frequently. You can change cover using arrows on the side of the screen, but there usually are only a couple of pieces of cover to choose from. The enemies will also hide behind cover, though sometimes laughably poorly, and both your cover and the enemy’s can be destroyed if it takes enough damage. 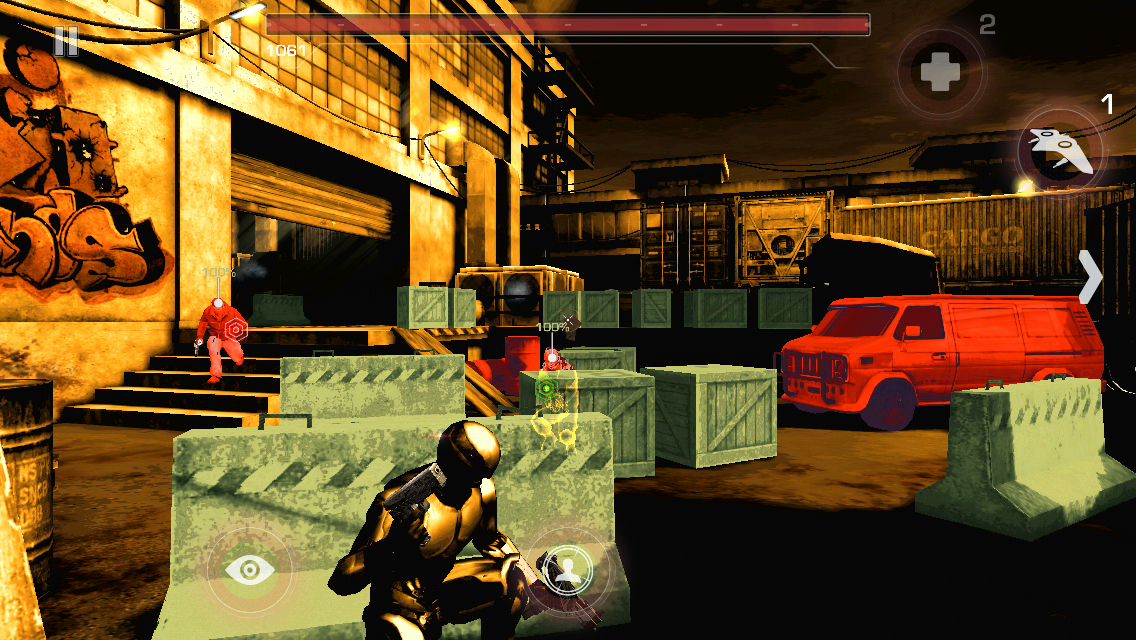 In addition to hiding and shooting, there are a few other actions you can take. You can perform a scan action that shows you where enemies are and their weak point, which can then be attacked for massive damage. There’s also a special focus attack that allows you to fire three powerful shots successively, but has a lengthy cooldown period. You can also refill your health with a health kit or call in a drone strike, but both of these are consumable items that can only be replenished by purchasing them with gold. Sometimes, there will be a hostage to rescue or a special enemy you need to arrest, but no matter what, the route to success is to just keep shooting those bad guys. Certain levels have multiple areas and a boss at the end, but other than being more difficult, there isn’t much to differentiate them.

Every level more or less plays out the same way. Scan, wait for an enemy to pop out and empty his clip, exit cover, shoot, change cover occasionally to avoid grenades or sniper fire, repeat. Enemy behavior never gets more complex, with their diabolical plans culminating in the rather smart strategy of two of them firing at the same time from different locations. The only real difference is how much health and damage-dealing capabilities the enemies have. It’s fine for a short session here and there, which is why I don’t mind the energy meter so much, since I never actually wanted to play longer due to the repetitiveness of the game. That’s a perfectly fine way to digest a game, as long as it feels like you’re making some kind of progress with your short sessions, and it’s in that capacity that the game fails. You simply can’t get anywhere without playing a lot, and you can’t do that without the repetitive nature of the game starting to set in. 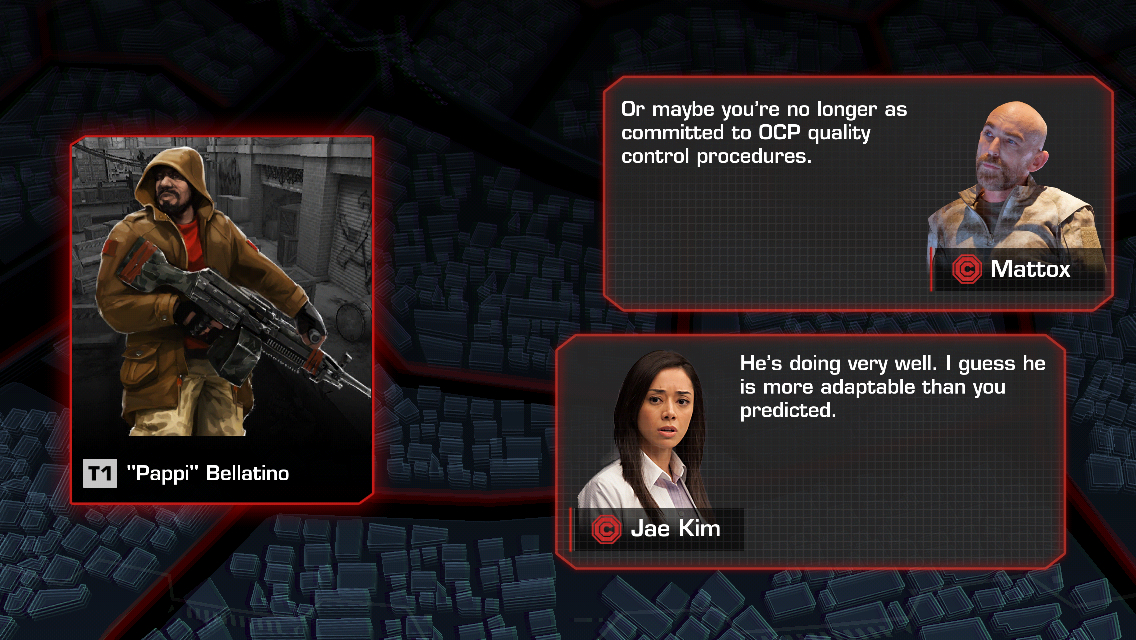 Don’t get me wrong, the game isn’t awful. The actual gameplay is, as I said, fun in short bursts, and when the cash is rolling, it’s fun to upgrade your gear and get new weapons. Everything looks and sounds really good, the controls work well, and there’s even an attempt at a story. It’s probably one of the more competent Robocop games ever made, actually. The F2P elements are just a bit too heavily baked-in, and the game suffers greatly as a result. If you’re a Robocop fan, there’s certainly no harm in giving it a try. It’s just a shame to see yet another game featuring this character miss the mark, this time because of elements external to the gameplay itself more than anything else. I’d have much preferred a better balance in the game’s economy to keep the gameplay moving, even if it meant the game wasn’t free. Heck, I’d buy that for a dollar.