Following in the tradition of the guides I wrote for Candy Crush Saga (Free) and Papa Pear Saga (Free) today I’ve got some tips for playing Pet Rescue Saga (Free) without blowing your savings. Pet Rescue Saga is King’s second-most popular game, and it’s probably their most creative. While Candy Crush Saga and Farm Heroes Saga (Free) are spins on the old match-3 genre, and Bubble Witch Saga (Free) and Papa Pear Saga are both rather shameless clones of Bust-A-Move ($4.99) and Peggle ($0.99) respectively, Pet Rescue Saga is actually a little bit unique as far as my knowledge of the genre goes. The other way it stands out is in how difficult it is. This is easily the meanest of King’s games, the one where you are least likely to just push through by luck, and the one where you really have to plan your moves ahead if you want to move forward. It’s interesting to me that King’s most popular games are also their hardest, but I digress. Here’s some advice if you’re planning on playing this popular hit. 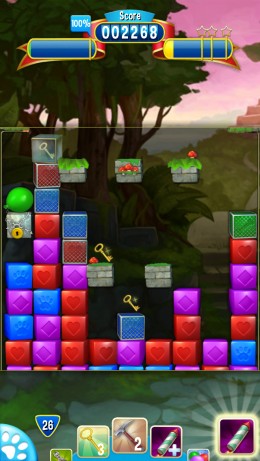 Learn how the blocks will fall. More than anything else, this game is about knowing what the consequences of each move you take will be on the field. Generally, blocks will shift down and to the left. Since most of the stages are set up from the beginning with no new blocks added, you need to concentrate on how things are going to shuffle around when you remove blocks. Nobody wants Sir Pigs-A-Lot to die just because you were careless. Nobody.

Plan a few moves ahead. You’ve got all the time in the world to think about your move. Once you’ve learned how the blocks fall, use that knowledge to figure out the best way to remove the blocks that are in your way.

Identify the problem blocks and work towards removing them. Keep your eyes on the higher blocks, especially colored blocks that are isolated. Find a match for them and plan your moves around getting rid of them.  These blocks make great targets for your fire cracker shots.

Work from the middle on out. This is usually the best way to clear out the field as much as possible. Find the largest group of one color in the middle, clear it, then find which color is now dominating the center and go after that next. This isn’t a hard and fast rule, but it generally works well.

Use your fire cracker whenever it comes up. While there are some situations where you might want to hang onto it, like stages with a lot of keys, you’ll usually want to use the fire cracker power-up right away. Chances are you’ve always got somewhere it’ll be useful, and once you’ve used it, you can start earning your next one. I like to use the fire cracker on the tallest column with mixed colors, closest to the left-hand side. Since the blocks shuffle to the left, the left-hand side usually ends up more cluttered than the right. 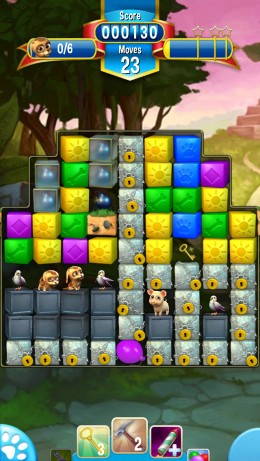 Try to save any bombs the stage provides. When you get to the bottom, bombs can save your bacon, quite literally sometimes. It’s not always easy to keep them in play, because the screen will refuse to scroll if you have an active bomb out, so do your best to keep them in their precious glass cases until you reach the end. A fire cracker and an unused bomb can turn around a sure loss pretty quickly.

Pay attention to any special obstacles the stage might contain. If there are lock blocks, make sure you’re planning towards cracking open the key block. If you get into a position where you can’t break open the key before you hit the locks, that’s an instant life lost. Similarly, manage the grey metal boxes carefully. If they’re under any of your pets, they’re going to be a problem later. Take them out using a bomb or the firecracker power-up.

Keep your goal in mind. There are a few different stage types and I’ll go over some advice for each of them further down, but it’s important to remember what your goal is and focus on it. It’s often the case that you don’t need to remove some of the blocks since you’re just rescuing pets. At other times, you’ll need to remove almost every block, and in that case, you should really be concentrating on taking out problem blocks.

Don’t forget the score threshold. Ah, having too low of a score, the silent killer. Every stage has a minimum score threshold, so make sure that you’re clearing lots of blocks at a time whenever you can. Pets also give a lot of points when you rescue them, so if there are extras in a stage, take care of them if possible. Nothing feels worse than finally beating the main goal on a difficult stage only to have your score be too low, costing you a life and sending you back to the start of the stage with your tail between your legs.

Boosters are very rare, use them sparingly. King’s been getting more “generous" with boosters in their other games, but they are still pure spun gold in Pet Rescue Saga. The game will give you a handful for free. Save them until you’re really stuck, and only use them near the end when they will assure you victory. Once they’re gone, they’re gone, unless you spend real money, which the title of this guide specifically tells you not to do. 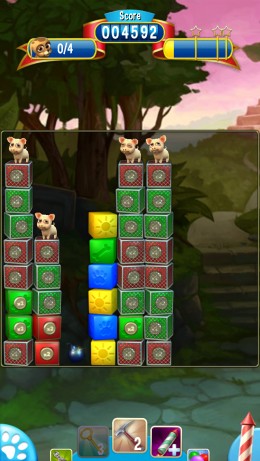 Classical Mode: In these levels you need to remove a certain percentage of the blocks on the field. All of the blocks are set up when you start the stage, so Lady Luck will be neither your savior nor your downfall here. You might also need to rescue some pets in these stages, but the main focus is clearing out the blocks, so follow the advice I gave above and work your way out from the middle, keeping an eye out for any isolated colors. If it looks like you can’t get to a particular block with another one of the same color, that’s the column where you’ll be wanting to use your fire cracker. Hitting the score threshold in these stages can sometimes be tricky if there aren’t many pets to rescue, so make sure you’re matching lots of blocks at once, especially when there are multiplier blocks in play.

Rescue Mode: These levels focus on getting a certain number of pets to the bottom of the stage. Once again, the blocks are set in place right from the start. Clearing blocks here is just a means to an end, but they do count towards getting your fire cracker ready to go. Make sure you’re planning ahead to remove any stage-specific obstacles. Remember, every block under a pet is an impediment to clearing this type of stage, and the more different colors you get underneath them, the harder it’s going to be to dig out. Also, be really careful about leaving pets near the top of the screen. The rescue target doesn’t generally leave much room for error whatsoever. If you can get your pets grouped into one or two columns, especially one on top of another, that’s going to be to your benefit when you reach the bottom of the level. Score tends not to be a problem here because of the large number of points pets give for being rescued, so don’t worry if you have to make smaller matches.

Score Mode: In these levels, you have a limited number of moves to achieve a certain score target. Sometimes, you’ll also have to rescue a certain number of pets. These differ from the other types of stages because they’re generally played on a single screen, with new blocks being added to the top whenever you clear others out. Try to set up huge matches here to earn maximum points. Remember that pets give a lot of points, so it’s not a bad idea to prioritize them whether they’re part of the goal or not. You will not have access to your fire cracker here, generally speaking, so don’t count on that to pull your fat out of the fire. Use the way new blocks come in to your advantage. When you clear pets, new pets will spawn, and usually in the columns that you removed blocks from. Keeping this in mind can help you avoid getting pets stuck on ledges that are hard to get them down from.

That’s all I’ve got for Pet Rescue Saga for now. You’ll probably find yourself getting stuck more often in this one than in other King games, especially if you just try to play through guns-blazing, but it is pretty satisfying when a plan comes together. Have patience, and use what you can from this guide, and you’ll make it through. The important thing is to never give up. After all, we wouldn’t want the nightmarish animals with their giant vacant eyes to be disappointed in you, would we? I didn’t think so.