Originally released as Stealth Bastard: Tactical Espionage Arsehole for PC, but changed to a more family friendly name, especially for family use devices such as iPads, Stealth Inc.: A Clone in the Dark [$4.99] has a fresh home in Apple’s ecosystem, and it’s made the transition very well. It’s a cute, clever and fairly original stealth puzzler.

You play as unnamed clone, built by an unnamed company whose purpose is to kill these clones, repeatedly, in varying manners. You’ll make your way through tests at some nondescript facility, proving your sneaking skills against a variety of challenges. Lasers, falls, cameras, sentries, blades. At its core, the game is a puzzle platformer, giving you the task of getting from one end of a room to the other. You’ll need to hide in the dark to avoid a panning camera, to jump to the roof above it, where you’ll find a box you can drop to unlock the door which you then have to sneak to. The first chunk of levels will be easy, but then the difficulty ramps up greatly, almost as if there were no “medium” mode; it’s just out of the frying pan and boiling into an agonizing death in the fire.

Controlling your clone is fairly easy with the touch screen system, though if you’ve played the PC version, it may take some getting used to. You maneuver with a virtual stick on the left side while jumping and crouching with little arrow buttons on the right. When you need to activate something, such as a console, a contextual button pops up; this leaves the playing screen fairly neat and tidy. 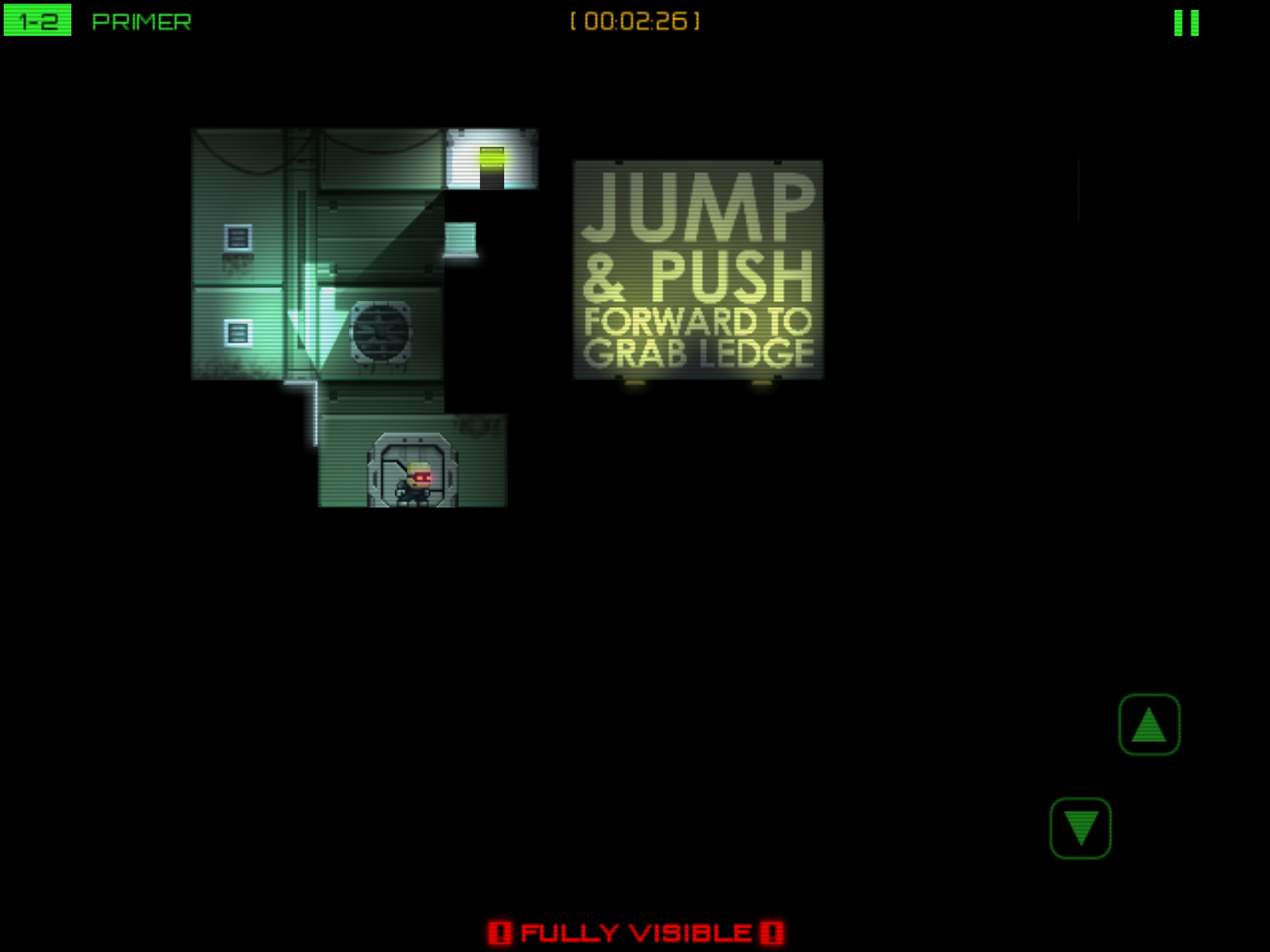 You will die. A lot. You will be burned by lasers. You will be crushed. You will be zapped. And you will not like it. However, you will like that while death is frequent, so is the checkpoint system, and you won’t be far off from where your corpse once laid. In addition, restarting after a death is immediate; there is no backing out to a menu, or having to hit restart or retry.

There are eight sectors (read: worlds), each consisting of ten chambers. Aside from having a (p)unny name, each chamber has individual leaderboards that show your personal stats (best time, deaths, times spotted) as well as the best times in the world.

Stealth Inc. is teeming with humor, in the form of comical messages that show up in certain chambers. Seeing “that’s not how it’s done” when you die, while cruel, can’t help but make you chuckle a little. 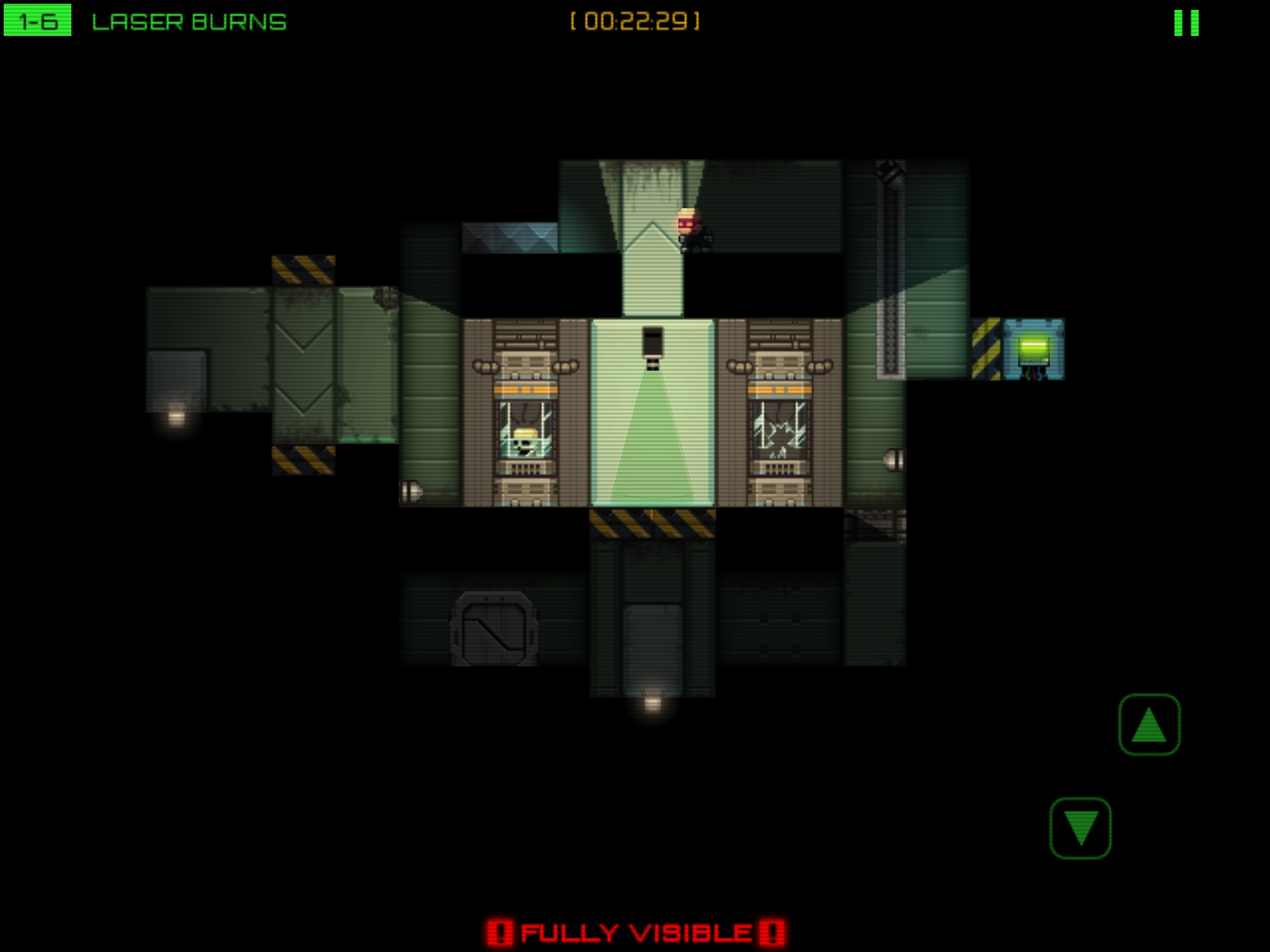 Graphically, Stealth Inc. is a simple, 2D affair, with some pretty amazing lighting and shadow effects. But, you probably knew that, considering a game based on stealth requires both lighting and shadows. Clone #477 (or whichever one you’re up to, be honest, you’ve killed a lot) explodes in a pool of red giblets when he’s vaporized by a laser, or gets crushed. The music that plays over the game fits the atmosphere; it doesn’t draw you out of the game, nor does it get needlessly loud or convoluted. It sounds like something you would hear in the Mission: Impossible television show.

Sadly, two of the big features missing in the game are equipment and a level editor. In the original, you could equip different camo sets, which came with their own specific leaderboard, which arguably added some longevity to the game. Who wants to be number one in the world for the default suit, when you can be number one for everything?

Aside from continually trying to improve upon your best, you can partake in hundreds upon hundreds of community created chambers, but sadly, as mentioned above, you cannot create your own. In order to play the community levels, you’ll need to unlock it, which is, naturally, an IAP.

If you enjoy difficult puzzle games, and haven’t yet tried this game, you owe it to yourself to give it a shot. The controls carry over well, it’s fun, and it’ll take you a while to get through all the chambers. The lack of a level editor, equipment, and additional IAP for what is already a $4.99 game seems like an odd omission, but the challenge and, dare I say, cuteness outweigh the downsides.