Like most Grand Theft Auto games, Grand Theft Auto: San Andreas ($6.99) launched with loads of fanfare and like many GTA’s before it, its release in 2004 marked a significant evolution in the depth, complexity, and overall size of the game. In fact, if the original had any drawbacks, it would’ve been just how far GTA:SA was pushing the PlayStation 2. The game seemed to use 101% of what the PS2 could do, which meant maximizing all the drawbacks of a console system pushed to its limit. Load times were crazy, draw distance wasn’t great, and as someone who was pretty into PC gaming at the time, its low frame rate was hard to deal with. Regardless, GTA:SA was, and still is, an absolutely incredible game.

As the title hints, GTA:SA is set in San Andreas which is a weird mixture of vaguely familiar elements of Los Angeles, San Francisco, and Las Vegas. There’s also other familiar geography from the American southwest like an Area 51, Hollywood, the Hoover Dam, and more. You’ll play as CJ and the game opens with him returning to his old stomping grounds following the death of his mother. Of course, since he’s been gone everything has gone south, and a large part of the game orbits around restoring his gang on Grove Street and then eventually taking over territory from rival gangs. Of course it wouldn’t be a GTA game if there weren’t also lots of twists, turns, and all sorts of unsavory characters in between. 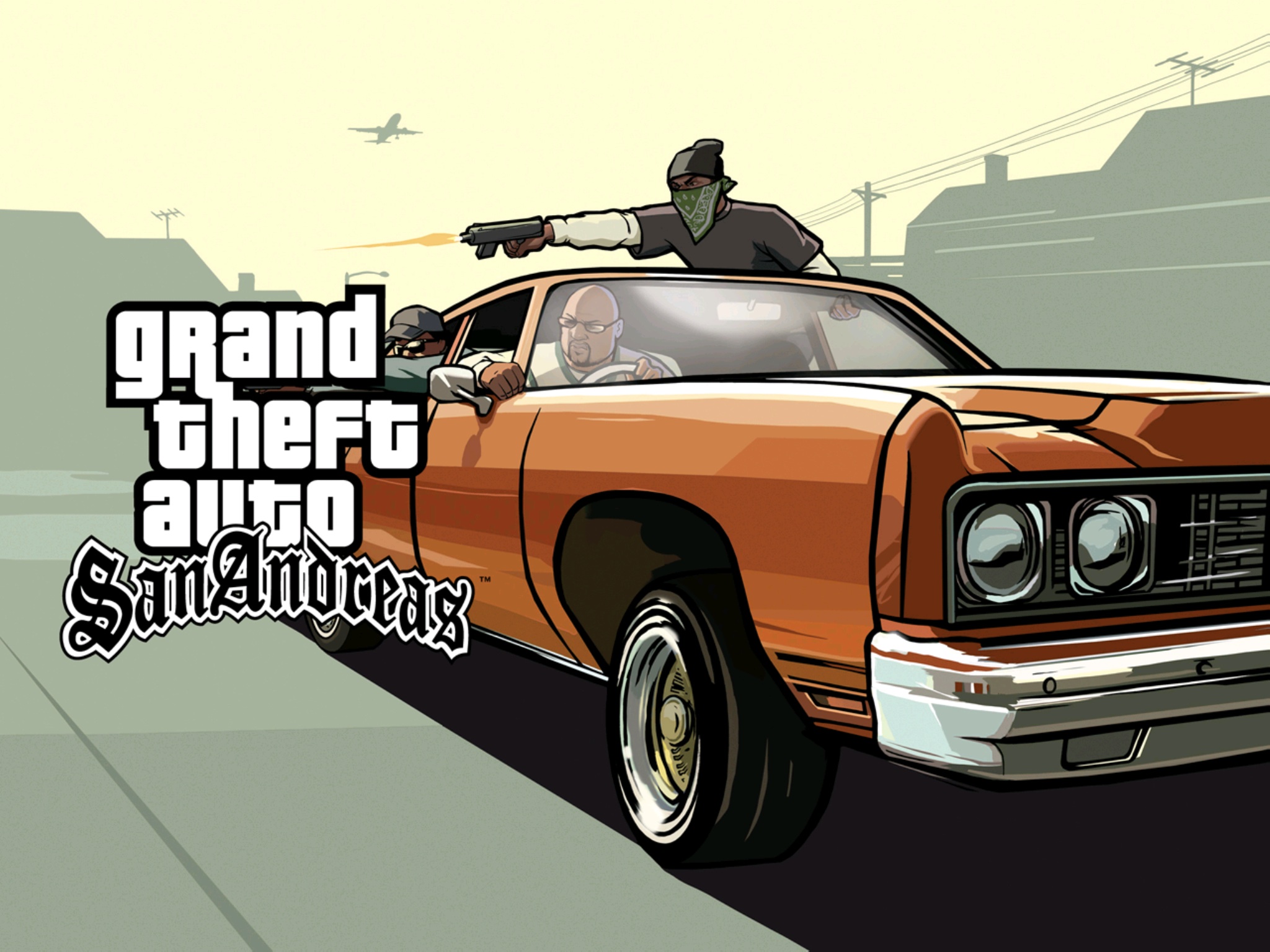 GTA:SA follows in the footsteps of its predecessors with some of the best open world gameplay available. While the plot of the game itself is actually fantastic, you can choose to completely ignore all of the missions and instead just drive around the city stealing cars and causing general mayhem. In fact, GTA:SA does not skimp on content outside of the story missions. The game is home to too many mini games to list, with everything from playing pool, to getting involved in low rider competitions, to gambling in casinos. RPG-style stats are everywhere, and your actions in game have a direct impact on your character. One of the most visible (and obvious) is that you’ll actually get fat if you eat a lot of fast food or get buff if you spend a lot of time at the gym.

What’s weird about reviewing a game like this is that there isn’t a whole lot to say about it that hasn’t already been said at least a hundred times before. Per the most recent stat I can find, there’s close to 30 million copies of the game in circulation, and with a near perfect score on Metacritic I’d find it hard to believe that there’s many people reading this review who don’t already own (or at least have played) San Andreas already.

So, let’s focus on the iOS port. 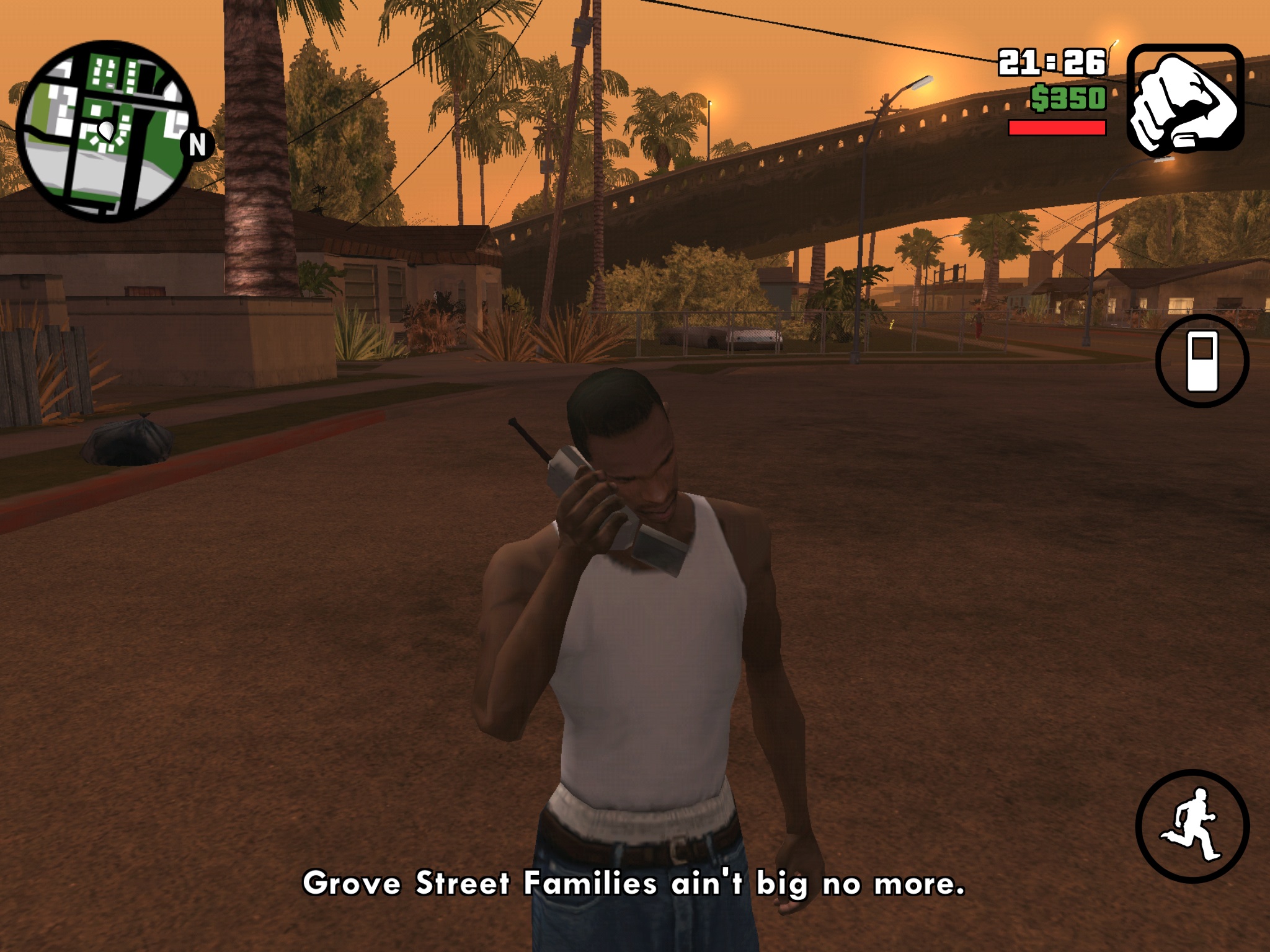 As I mentioned, the game was great on the PS2, but I think the PC release in 2008 was when GTA:SA really hit its stride. All of the problems that came from a console nearing the end of its lifecycle completely vanished on faster PC hardware, and the iOS port is no different. The draw distance is awesome, the frame rate is great, load times between going into and out of buildings are nonexistent past the time it takes for the screen to fade in and out, and CJ actually finally has fingers now instead of the weird fleshy blobs he had for hands before.

If you take 10 seconds to sign up for the Rockstar Social Club, you can log in and gain access to two cloud save slots for the game, which might be the best feature of the iOS port. One thing that always makes me super nervous of getting too involved in these iOS games that feature hundreds of hours of gameplay is having your save data trapped inside of the app, on one device. One botched update can nuke weeks of combined play time, and good luck if you want to play on more than one device. Rockstar’s cloud save system mitigate all of these problems. There’s even two slots you can alternate between when saving, which I highly recommend doing as having a backup save has saved my butt more times than I can count in GTA games when I find myself saved in a very stupid place or time in game. 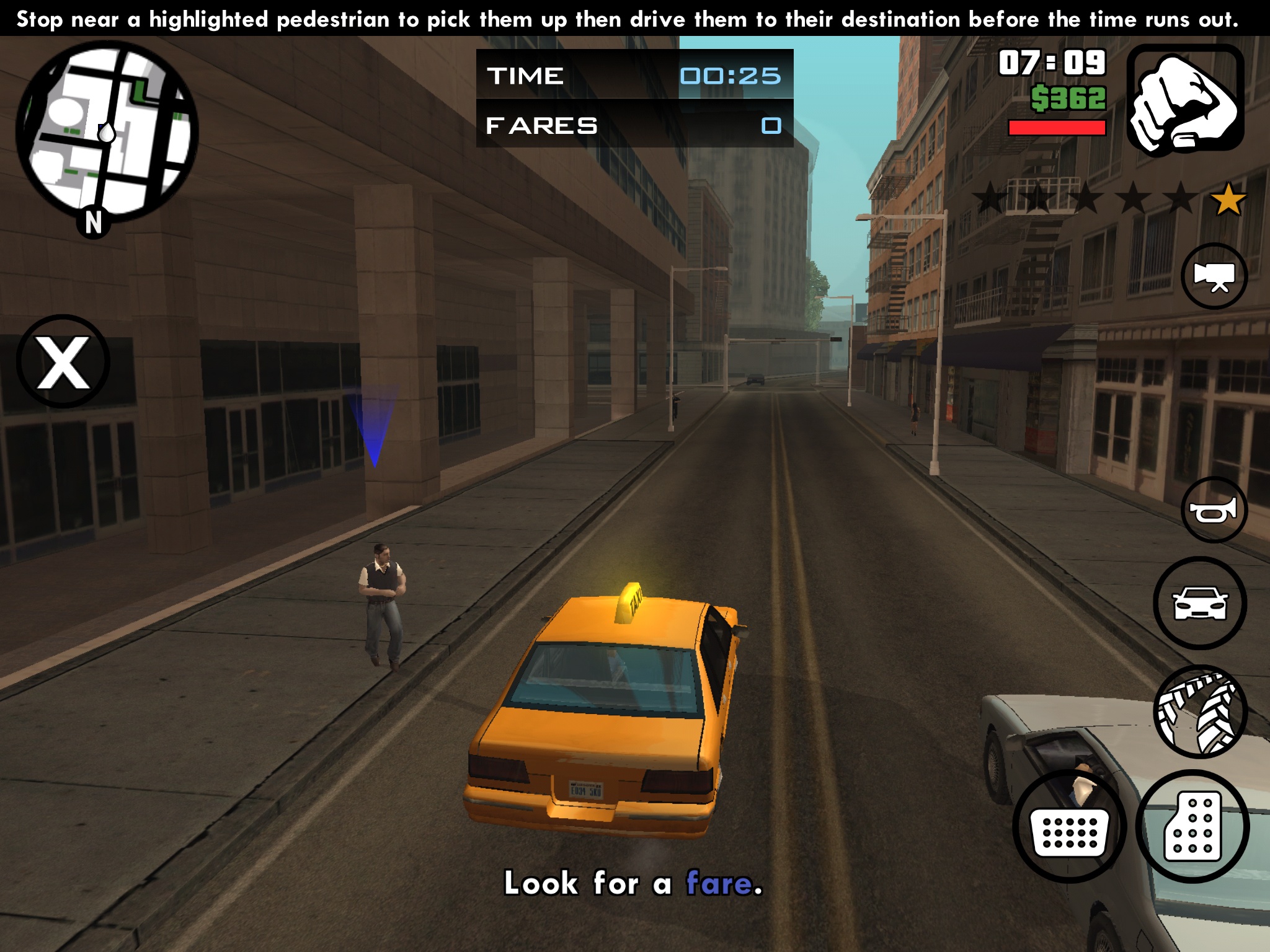 There’s a number of virtual control options, including digital and analog steering, analog sensitivity, invert look, complete customization of where the buttons are on screen, and tons more. If you’ve got an iOS game controller the game works with that too… And while it’s definitely “better" with physical controls, GTA:SA isn’t a game I’d drop $99 on a controller for exclusively- Particularly with how much effort Rockstar put into the touch interface. The default controls are good enough that I haven’t really even bothered with strapping my controller in, which I think is exactly what you’d want in a game like this. The only real benefit of using a controller is it feels like the camera becomes a little easier to control, but, again, it’s not like it’s difficult to control to begin with.

If you own an iOS device that’s on the supported device list (Basically, the iPhone 4S and newer.), particularly if you’ve got something recent, Grand Theft Auto: San Andreas is as must-have as it gets. I’ve been playing it on my Retina iPad mini, and it’s incredible- To the point that I feel like this is the best the game has ever been. GTA games are conducive to all iOS play styles between loading up the game and playing some mini games for a few minutes to settling in for a long play session through the story mode, San Andreas will keep you busy for weeks to come- Or even longer if you’re a completionist into 100%-ing the game. Additionally, at $6.99 its launch price is lower than any other place or platform I can find to buy the game. 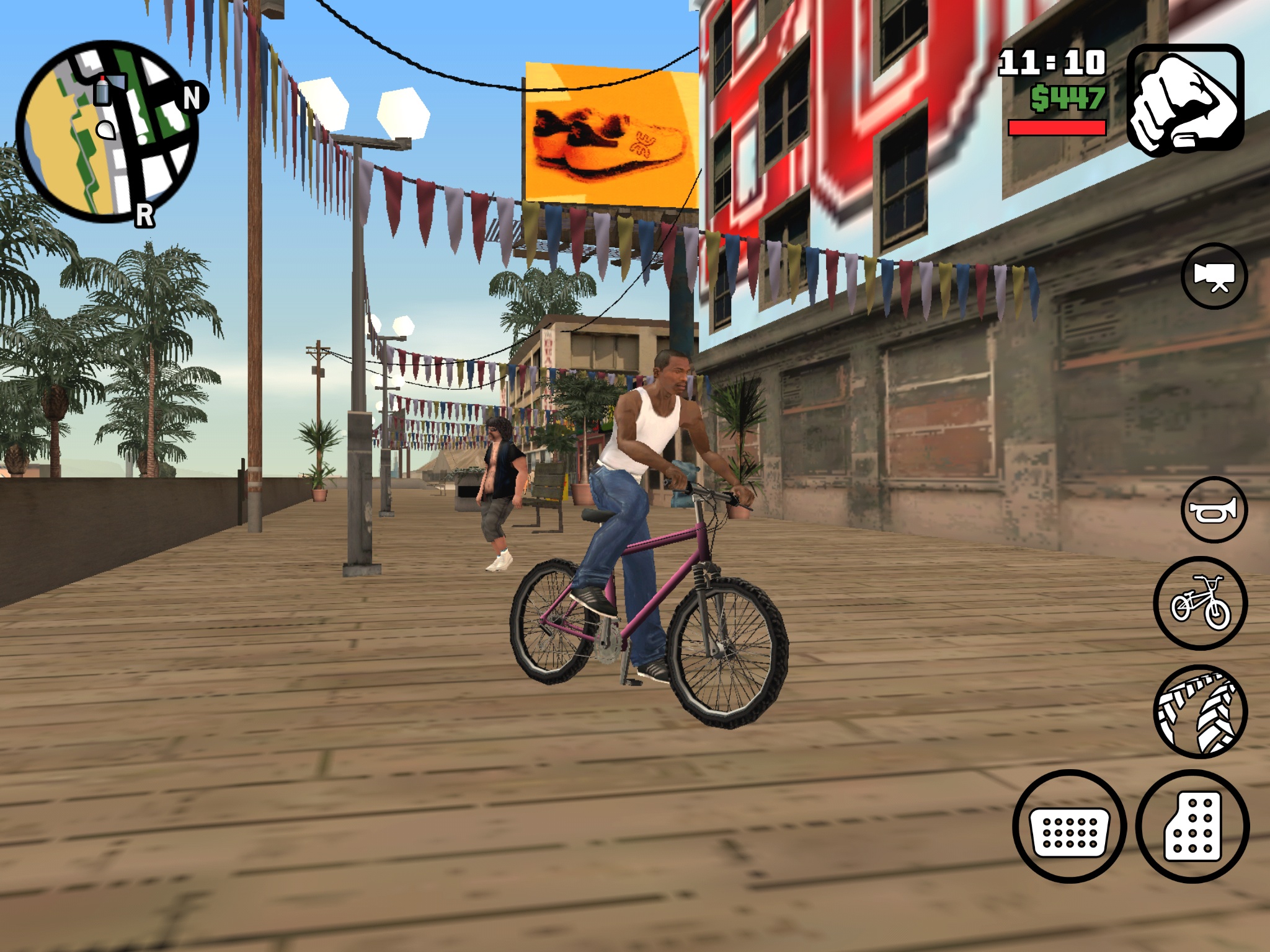