Gary Chalk is one of those guys whose name you might not know or remember, but whose work will strike a familiar chord with many. His striking and unique artwork can be found in many fantasy favorites, including the classic Redwall series of books, the Lone Wolf series of gamebooks, and the cult favorite board games Talisman and HeroQuest. His style is recognizable almost immediately, with gaunt-faced humans in highly detailed clothing and heavily-stylized monster designs, to say nothing of his penchant for bizarre architecture. It’s his contributions to Lone Wolf that make him well-known among gamebook fans, though, and that fame makes him a solid choice to build a new series around.

Gary Chalk’s Gun Dogs ($1.99) is an original gamebook adventure from genre heavyweights Tin Man Games. This is hardly their first original entry into the genre, but it does feel unique among their lineup in that it’s almost faux-retro. This game feels very much like a digtal version of a book you could swear you owned when you were a kid. Quite a lot of that is owing to Chalk’s art, of course, but there’s a lot of that old Fighting Fantasy charm at play here, too. The story is written by Jamie Wallis, set in a world designed as a collaborative effort between the author and Gary Chalk. It’s an interesting setting that I hope we see more of in the future. 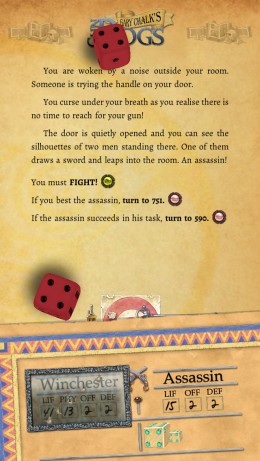 In Gun Dogs, you play as the leader of a resistance against the Emperor of the lands. Before the game even begins, you’re captured and given a choice between execution and becoming a Gun Dog, a servant of the Emperor sent on extremely dangerous missions for a chance at a pardon. After being given your mission, you’re equipped with a special three-barreled gun and fitted with a magic collar that will tighten around your neck if you even think of escaping. The collar ends up serving a gameplay purpose beyond narrative incentive.

You see, your mission is to check up on one of the Emperor’s relatives who commands a distant fort. The outpost has gone silent, and it’s up to you to find out what happened. At the beginning of the game, you have a wide array of choices as to which direction you want to take towards the fort, but as you make choices, the collar closes off previous roads to you because you cannot go in any direction that takes you farther away from your goal. It’s a clever way of keeping you on the rails and encouraging replays to explore other paths, which are important aspects of any gamebook. Regrettably, the gun ends up as window dressing for the most part. The biggest contribution it makes is giving you the chance to end some encounters before they even start. It’s cool, but this is Gun Dogs. I did my part by naming my character Mr. Barkles, but I don’t feel the gun was holding up its end of the title.

As a gamebook, it’s pretty standard fare. If you’ve played one of Tin Man’s gamebooks before, the engine will be immediately familiar to you. All of the usual options are in effect, largely connected to difficulty settings. There are three settings: classic, adventurer, and casual. Classic is the most difficult mode, with your stats being entirely at the whims of the dice, and a mere six bookmarks at your disposal. Adventurer fixes your stats at a pretty high number and gives you unlimited bookmarks, and Casual gives you three cheat options on top of that. On Casual, you can go back a choice at any time, unlock all of the options in the book whether you meet the requirements or not, and heal yourself outside of fights at no cost. Casual is pretty much just reading the book, I suppose. I found Adventurer hit the right level of challenge for me, but it’s nice to have a harder difficulty mode to increase replay value. 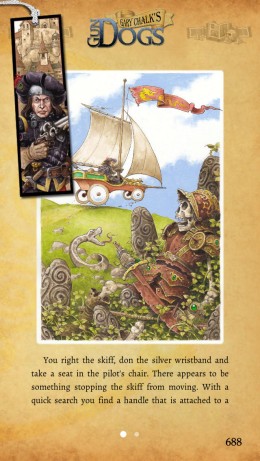 You will definitely be replaying this game more than a few times. Like most good gamebooks, there are a lot of choices to make, and anytime you hit a point where you don’t meet the requirements to choose an option, the text does an excellent job of hinting at what you should have done or where you should have gone to have met it. It’s always exciting to follow a new choice, even if it’s optional in the scheme of things, so there’s ample motivation to go and try a new way through. You can, theoretically, beat the game by taking the most direct path, if the dice favor you, but the indirect path not only offers more adventure, it also potentially strengthens your hero. On top of that, you can unlock artwork and achievements, and most of these are found on the roads less-traveled.

The story itself is kind of middling. I love the premise, and the world is unique enough and full of interesting characters and creatures. There’s a kind of Renaissance-era feel to the Empire of the Five Cities, which keeps Gun Dogs from feeling a little bit too familiar. I found the text describing the world to be nicely-written, but the action scenes feel a little too rote. The plot is kind of weird and limp. It goes to an unexpected place, but that place wasn’t really all that interesting for me. The ending is seriously anti-climactic. I mean, it’s an ending, albeit one open enough to have continued adventures from, but it just didn’t feel as epic as it seemed to be building to. The result is that it feels less like one of the great early gamebooks and more like one of the ones from the era where they were just churning them out. Still lots of fun to be had, but nothing you’ll be talking about afterward.

Still, with plenty to see, lots of replay value through the many paths you can take, some wonderful illustrations by Gary Chalk, and an intriguing new world, you could do a lot worse in the genre than Gun Dogs. The Fighting Fantasy books on offer from Tin Man Games are probably better, but Gun Dogs has the notable advantage of being completely new, while still maintaining a classic style, and I think that combination has appeal to a lot of fans of gamebooks. I hope we see more books in this world and that they up the stakes appropriately.