One of my favorite little gems released for iOS this year is Pixel Licker Games and FDG Entertainment’s Slayin ($0.99). Released back in April, Slayin is best described as an auto-running-arena-based-action-platformer (whew, that’s a long description). You’ll play as one of three characters, running back and forth destroying enemies, leveling up and getting better and better loot. It sounds simple, and it is, but it’s totally fun.

Slayin hasn’t seen a ton of update love since it’s been released, but that’s about to change as the developers have posted a teaser image in our forums of a forthcoming update which will add three additional characters to play as. In addition to the original three characters of a Knight, Wizard and Knave, the update will include a Ninja, an Archer and a Tamer. You can see a screen of the Archer below. 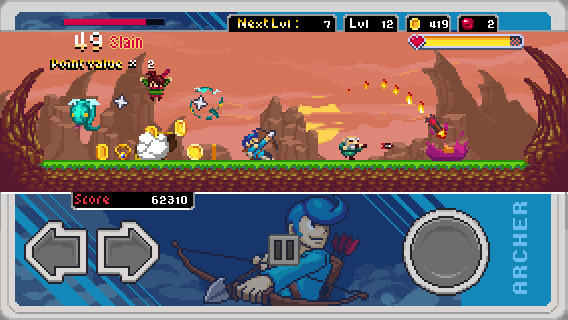 We loved Slayin in our review and it’s still a go-to game on my iPhone even all these months later. It’s just one of those games you know you can pop open at any time and have a good time with. Three new characters is just the sort of thing to reignite my obsession with Slayin, which is either a good or bad thing depending on how much you value productivity. If you missed out on Slayin when it originally released then definitely check it out, and keep an eye out for the new update to hit in the near future.