Have you ever found yourself playing a great strategy game and thought to yourself, “All this carnage and killing is great, but wouldn’t it be even greater if I could eat the remains of my enemies to gain strength?" If so, I have got two things to say to you. First, you are definitely not invited to Christmas dinner, and second, Skulls of the Shogun (Free) is the game for you. This game was released a while ago on Xbox Live Arcade and a few other more ill-fated MS platforms, followed by a Steam launch with some new goodies added in. That version, dubbed the Bone-A-Fide Edition, has now come to iOS, completely intact, with a couple of cool tricks up its sleeve.

Skulls of the Shogun is a turn-based strategy game, settling more in the accessible end of the pool with games like Advance Wars and Final Fantasy Tactics ($13.99) than the more hardcore stuff like Hunted Cow’s games. It’s easy to get into and the pace is nice and fast, making it a good entry point into the genre for those who might be put off by complexity often found in the genre. Don’t take this to mean that Skulls of the Shogun is an easy game. The AI is aggressive and fairly intelligent, and the way the game flows means that if you start losing, it’s quite hard to make a comeback. It’s quite possible to lose during the tutorial stages if you don’t take care of your leader, and once you get past the first few stages, the gloves are off. 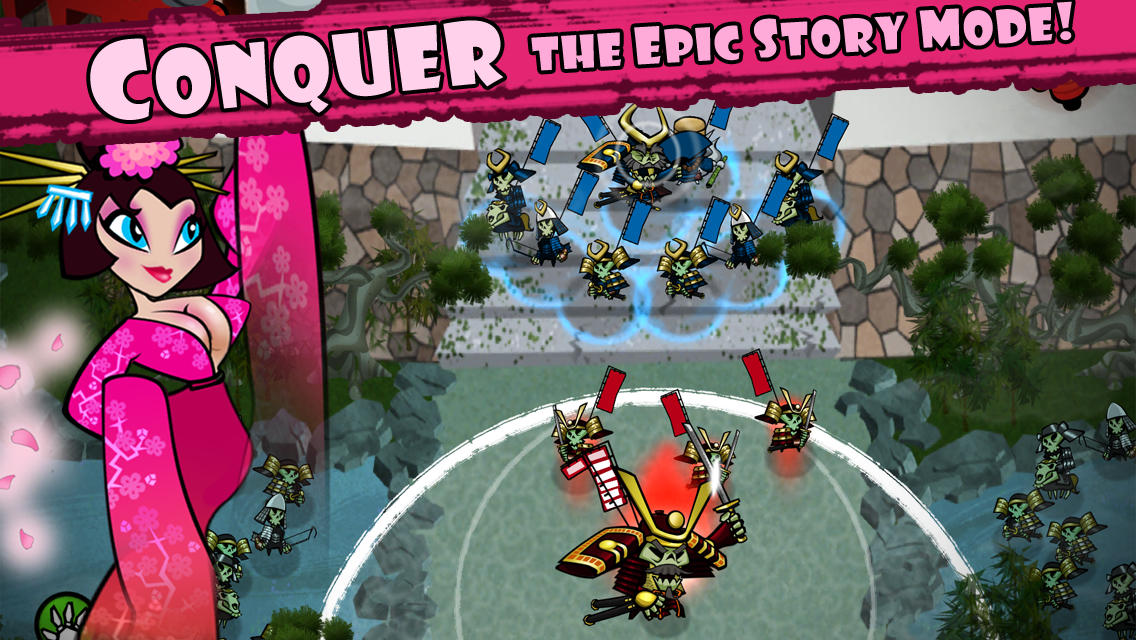 A lot of the charm of the game comes from its slick presentation. While there have been some good-looking examples of the genre, strategy games tend to be focused largely on mechanics and content, with presentation being pretty low on the list of priorities. Skulls impresses with some excellent art, great music, and sharp writing. A brief cut-scene introduces the story of the game. The powerful warlord General Akamoto perishes in battle and finds himself in the afterlife. He’s told to wait in line with the other masterless samurai, but he’s not so good at waiting or, well, anything that involves not killing. He decides to take over the underworld, and immediately recruits some allies to go on a reign of terror. It’s not long before he runs into a face from the past that only spurs him on further.

This could be played straight and would probably be pretty cool, but instead, the tongue is planted firmly in cheek to marvelous effect. The dialogue feels like something out of a good old Saturday morning cartoon. The story provides enjoyable context for the battles without ever becoming overbearing, which is not a balance frequently struck in this genre. There are a lot of pop culture references, but they’re done with enough subtlety that if you don’t catch them, it won’t seem like an odd aside.

The game is a turn-based affair, with a fixed number of actions you can take each round regardless of how many units you have. You’ll start off with a preset group of units, but most stages will allow you to summon new units at a shrine if you’ve harvested enough rice. Each of the three main units is useful in their own way, with the lowly infantry providing strong defense and good knock-back capability, the archer being able to attack at a distance, and the cavalry providing excellent mobility and powerful attack strength. As you reach new areas, you’ll also be able to summon various monk units, who can use various types of magic to bolster your main units. Of course, you also have your leader unit, General Akamoto, who is very powerful intially and only gets stronger from there. The risk in using him up front is that if he falls, you’ll immediately fail the stage and need to start over. Akamoto also becomes more powerful the longer you leave him untouched at the start of a level, so you really have to consider when you want to use him. 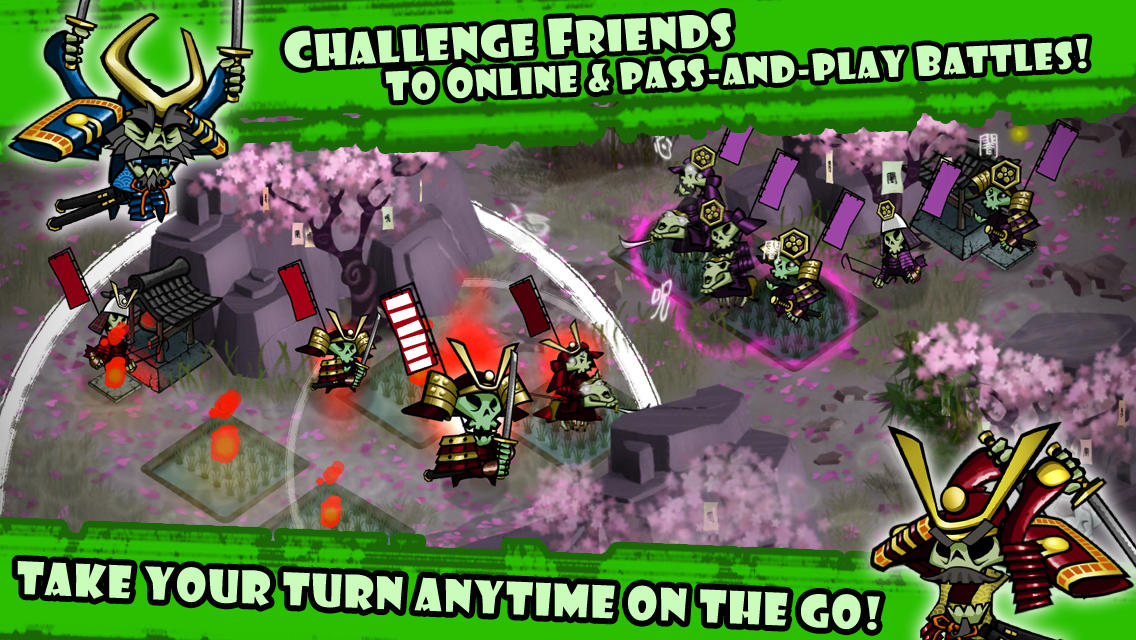 The most unique part of the gameplay ties into the title of the game. Whenever a unit’s HP is depleted, they’re reduced to a skull. These skulls can be consumed by the opposing units to restore health, and if a unit eats three skulls, they enter a powered-up demon state that can take extra turns, a heavy advantage. A powered-up general is a devastating force, but having your general in range of skulls generally means they’re in harm’s way, adding an element of danger to prevent them being too overpowered. Of course, once one side has an advantage in demon units, things unravel pretty fast for the other side, so you’ll want to make sure you’re that side.

Skulls of the Shogun has both a single and multiplayer mode, and both are quite impressive. The single-player campaign offers about 10 hours of play through 24 stages. Early stages take about 10 or so minutes to clear, while later stages can go as long as a half hour, depending on your strategy. The first few stages roll out most of what you can expect from the gameplay, but you will still run into new units quite late in the game, so the game stays fresh for the duration. Each stage has a few specific goals beyond simply clearing the map, and some of them are very tough, so there’s a lot of replay value here. On top of that, you’ll be scored on various aspects once you’ve finished the stage, so if you’re score-minded, that will add another layer of depth. 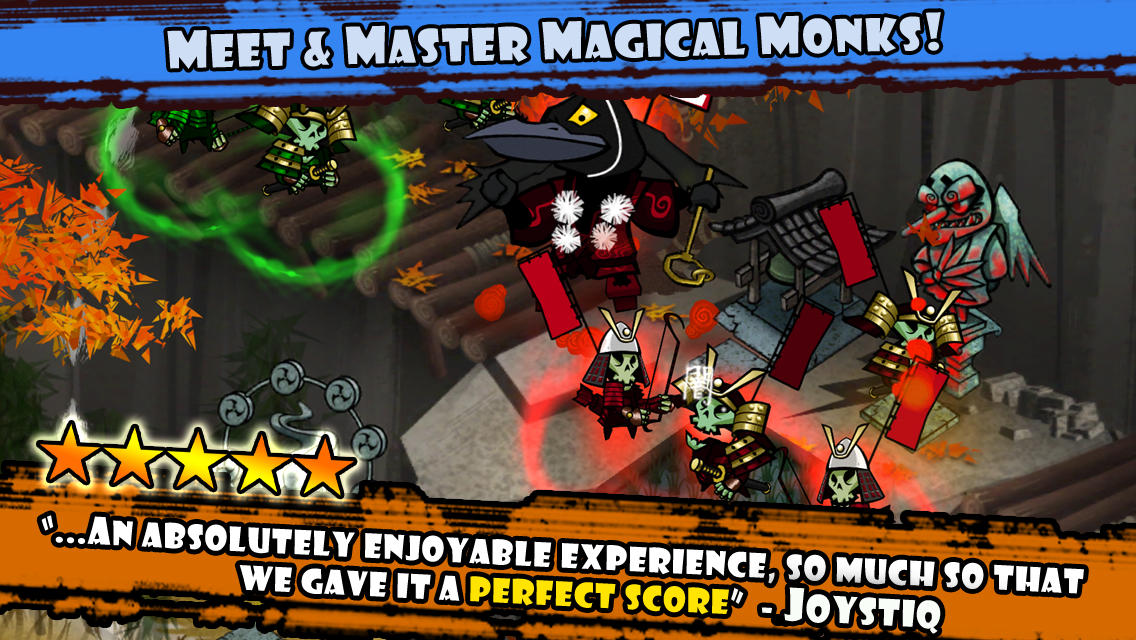 The multiplayer mode allows up to four players to face off against each other on a good selection of maps. Depending on how many players you have, a portion of the 36 multiplayer maps will be available to battle on. It’s a hefty selection that provides a lot of variety, with each setup requiring a slightly different approach. The most interesting thing about multiplayer in Skulls is that online play is cross platform. Players from the iOS version can face off with players on the Steam version asynchronously, which is rare enough on iOS to be notable in my opinion. What that means for the player is a wider pool of opponents available, which should keep the online community active longer. Of course, you can also play via good old pass and play locally, if you want to play with people in the same room. The fast pace of the game lends itself very well to multiplayer, since turns don’t take a great amount of time to play through.

The only knock I’ve got on this game is that the controls for moving units around are a bit weird and occasionally clumsy. Most strategy games on touch devices let you touch where you want the unit to move to, but in this game, you have to drag the unit where you want it to go. If the unit is in a busy area, full of skulls, resource tiles, and enemies, it’s often a pain in the butt to get it to just move rather than take an action. Luckily, the game confirms actions, so it’s almost impossible to make a move you didn’t mean to, but I do wish I could just tap where I want my guys to go. I should also mention that at the time of writing this review, there’s a weird bug involving region settings that may cause the game to crash on start-up if your region is outside the USA, but the developer has said an update has been submitted to address this issue, so I doubt it will be an issue by the time you’re reading this.

Skulls of the Shogun is a terrific game. It’s not reinventing the wheel, but it’s a very stylish strategy game with enough content and bite to keep a solo player happy for a long time, and a great spread of multiplayer maps and options to satisfy those with a multiplayer urge. Its accessibility makes it great for someone looking to get into the genre, while the challenge of completing everything should provide a robust feast for the veterans.