It’s crazy to think how many console games are ported to iOS, and actually work. With a number of high profile Xbox Live and PSN games releasing on a weekly basis, a large sample of them are starting to see some life in the mobile arena — and I suspect that once iOS 7 controllers catch on, we’ll see even more. The latest mobile port is Castle of Illusion Starring Mickey Mouse ($4.99)  — a solid remake that lends itself fairly well to the mobile platform, barring a few issues that spill over from the core game.

Castle of Illusion is a resurrected, remastered version of the hit Sega Genesis game from 1990. Although Disney’s famous mouse doesn’t really command the same respect today, back in the 16-bit era he played host to some of the best platformers of the era, and Castle of Illusion is no exception.

Your quest is simple — to rescue your beloved Minnie Mouse from the evil witch Mizrabel. So in other words, it’s no different from “Mario rescues Peach from Bowser." The game stays true to its roots with sections that feature mostly 2D gameplay, with the ability to go “off the rails" as it were and engage in the occasional bit of 3D exploration. Mickey’s abilities are a bit limited, as all he can do is jump off enemies’ heads (much like Mario), and throw apples at them — that’s about it. 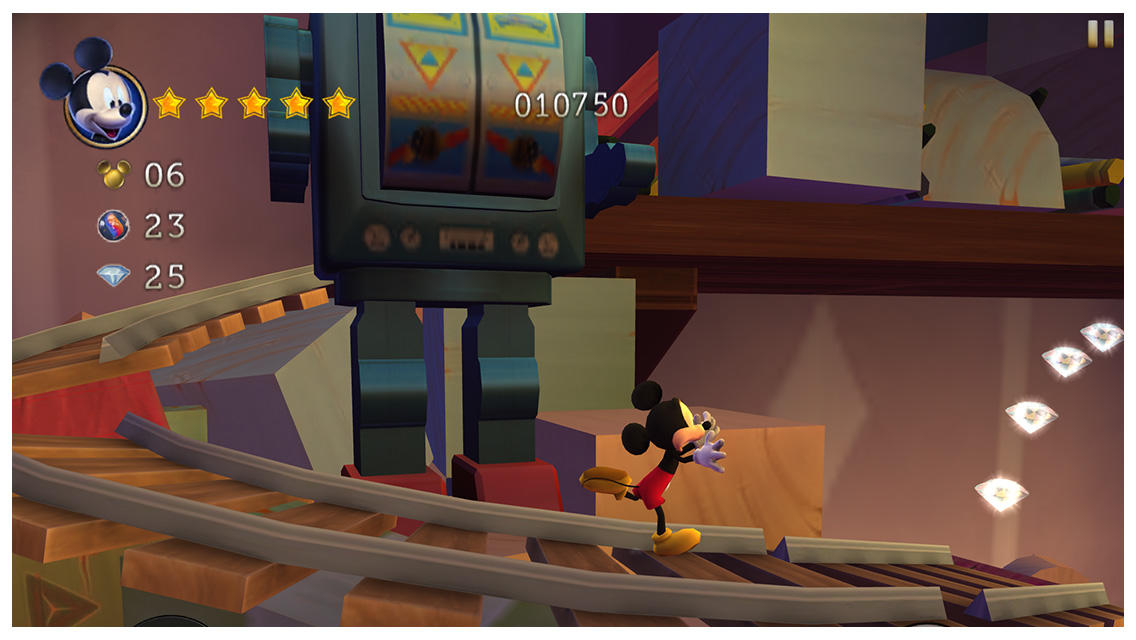 For the most part though, this simple scheme works. You’ll slowly make your way through various levels themed around different concepts (i.e. the forest, candy lagoons, and so on), tackling both challenges of dexterity and puzzle platforming. For instance, there’s one part of the game that has you running for your life from an Indiana Jones-like boulder, and another section that forces you to look into a mirror to see the “real" path to traverse a gap. New concepts creep their way into each stage regularly, but not all concepts are created equal.

The main problem with the design is that it feels a bit uneven in points, with a few stages that suffer from a lack of detail, or an otherwise lazy section that leads to cheap deaths. It’s not necessarily difficult in the grand scheme of things, but some sections require pinpoint accuracy, or you’re going to see quite a bit of checkpoint screens. Boss fights in particular are sections that feel like they were implemented just to go through the motions, and lack any real tension.

But despite those hang-ups, it should be said that this is a solid port on iOS devices, particularly on Retina Displays and iPad screens. Although the style itself doesn’t command the same visual charm as many other mascot platformers, the engine is faithfully recreated, and there aren’t any technical hiccups to speak of — at least in my time with it. It’s especially neat how the game can seamlessly move from 2D to 3D at the drop of a hat, and it implements it just enough to the point where it doesn’t feel like overdoing it.

The controls work fairly well, as the game isn’t tied to a tiny virtual button scheme (which is an alternate option should you spring for it). Instead by default, you simply move Mickey by sliding anywhere on the left side of the screen, and jump by tapping the right. The only hangup is a tiny red button located on the right side used for throwing apples — it’s oddly placed, and I had the tendency to throw instead of jump, or vice versa. It’s not a dealbreaker though as it’s easy to get used to, but this is the kind of game that screams gamepad support — so I hope the developers explore an update at some point once more devices hit the market.

Point blank, the game is incredibly short, and even if you go for 100% collectable rating it shouldn’t last you more than several hours. In a way, it feels a bit bare-bones, but considering the fact that the vast majority of the experience is enjoyable, it’s easily worth replaying in the future. The premium price will probably scare people away as well, but given the fact that it’s slightly cheaper on iOS than it is on any other platform, it’s important to note that this is still a fully-featured game.

Despite my small issues that have spilled over from the remake’s original platforms, I sincerely hope there are more solid ports like Castle of Illusion down the line. It’s incredible how well this game was handled, as playing it on a Retina Display feels identical to any other platform. The lines of mobile and console games are blurred even further as time goes on, and games like Castle of Illusion help lead the way.