The tough lot of being a fan of Marvel’s god of thunder, Thor, has become somewhat easier over the last several years. With soon to be two solo movies under his belt, and an important role in the biggest superhero movie of all time, ol’ Goldilocks seems to have finally broken out of being that stiff, weird, Shakespearean-speaking guy with the big hammer and a stupid hat. Now, he’s that stiff, weird, Shakespearean-speaking guy with the big hammer and no hat. Let’s hear it for progress! In all seriousness, if you had told me as a kid that someday I’d get to see Volstagg, Heimdall, Fandrall, Sif, and Thor duking it out with frost giants in Asgard in a live action movie, I’d have thought you were nuts. And if you had told me Thor would star in an awesome video game, I’d have called you insane. Well, Kid Shaun was half-right, at least.

For most of the history of video games, Thor hasn’t really been popular enough to merit his own game, even though his abilities and attitude make him an easy fit for action games, and his home world makes for a natural fantasy backdrop. Never mind a starring role, Thor wasn’t even playable in a video game until 2006’s Marvel Ultimate Alliance, in spite of his teammates showing up in a variety of beat-em-ups and fighting games. Since his first movie released, Thor’s had a starring role in a few video games, with the best of the lot being a half-decent side-scrolling action game for the Nintendo DS. His previous turn on iOS, Marvel Entertainment’s Thor: Son of Asgard ($2.99) was a boring and clunky third person action game in the vein of Sony’s God of War. Well, Thor’s luck isn’t changing today, because Gameloft’s Thor: The Dark World (Free), based on the new movie, is probably the worst F2P superhero game yet for iOS, and that is saying something. 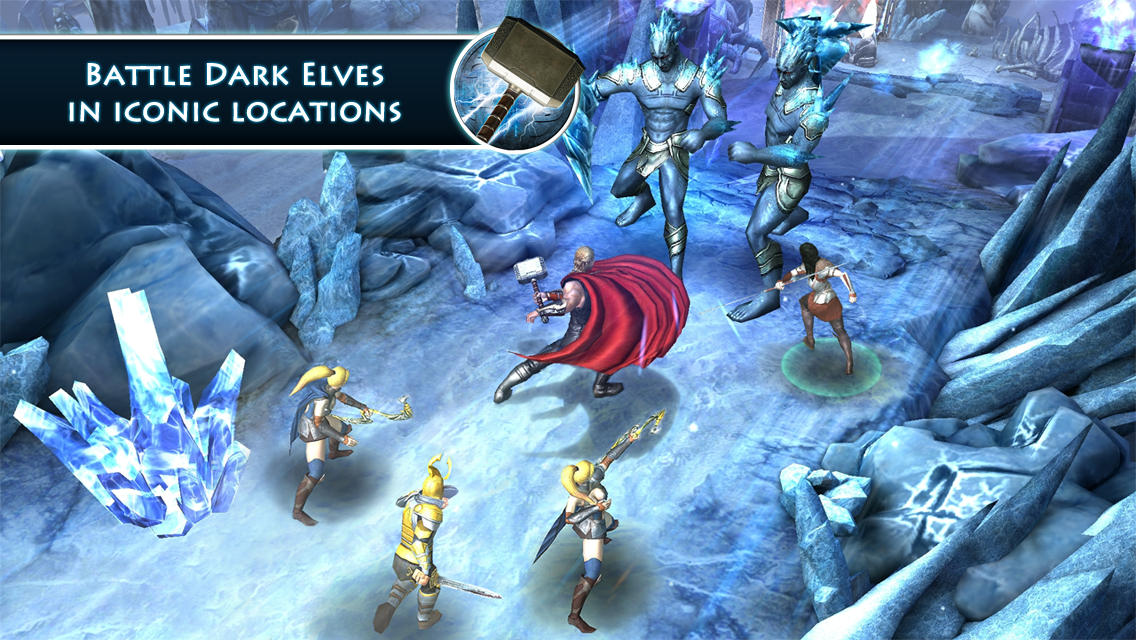 I haven’t seen the new flick yet, so I have no idea if this game is following the story or just serving as a companion piece, but if you’re a fan of Thor, there’s nothing really surprising about the premise. The Dark Elves are attacking Asgard, Loki’s being a jerk, and just about every one of Thor’s major enemies are trying to ruin his day by messing around in the Nine Worlds. You, naturally, play as Thor and need to travel around extinguishing threats with the help of your friends and summoned einherjer of various job classes. Basically, the game is a top-down action game, with Diablo-style tapping controls to move and attack. Each of the four worlds you visit during the course of the game is broken up into around 20 stages. Most of these stages have you fighting your way to the end of a very linear stage and destroying an enemy base. Occasionally, you’ll encounter stages where you have to defend your base or pull off a rescue, just to mix things up.

Thor’s got a fairly limited set of moves. You can tap on an enemy to attack them with his hammer, double-touch to throw it, draw various shapes or tap a button to launch powerful lightning attacks, and summon einherjer by touching their icon at the bottom of the screen. You can also drink a health or summoning potion by tapping on their icons beside their respective meters, but be careful about using those. They’re worth their weight in Uru. Thor will automatically go into a few different types of combos when you attack an enemy, but you’re not going to find much depth in the battle mechanics here. Thor is very powerful himself, but the real key to victory is through effective use of einherjer and allies to take down enemies so you don’t have to.

The einherjer are an interesting element of the game. You have a constantly-replenishing summoning meter that you can use to bring warriors of various types into battle with you. As you play through the game, you’ll unlock more types, and you can spend your gold to level up the ones you like best. If one of them should fall in battle, you don’t need to worry, because as long as you have summoning energy, you can bring in another. They have to walk from your base, though, so if you’re near the end of a stage, it’ll take them a while to get to you. Each enemy type is strong against some einherjer and weak against others, so using the right einherjer in the right situation is a major help. 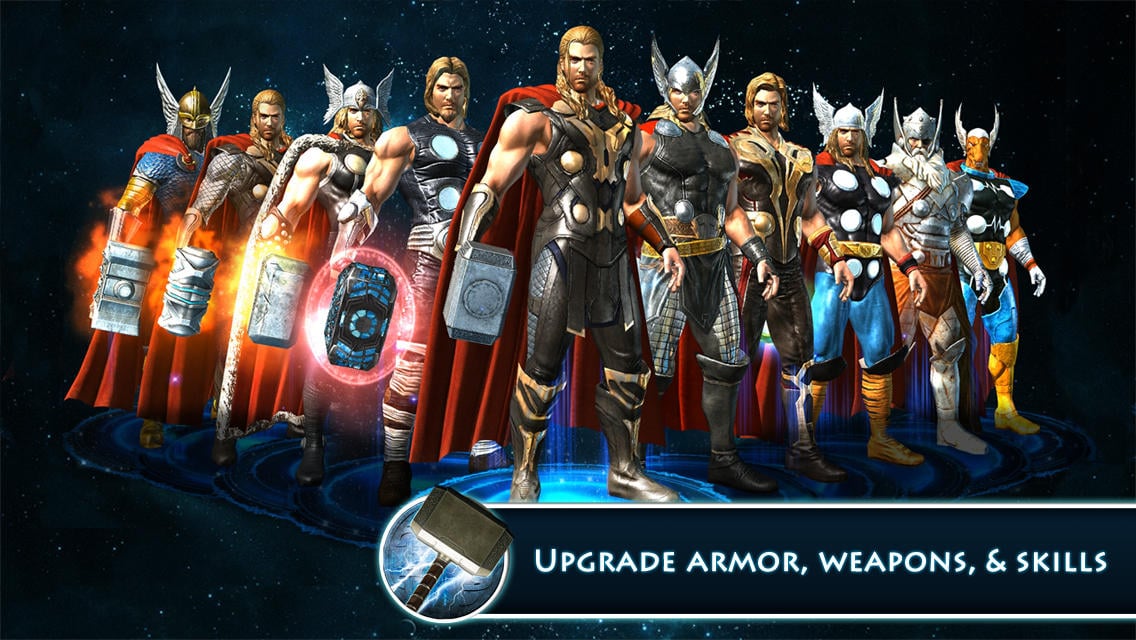 In addition to the einherjer, you can also unlock special allies to help you out. Fandrall, Volstagg, Sif, Baldur, and even Loki can be recruited to support you. Like Thor, they have special abilities that you can use by tapping an icon, and they are considerably more powerful than an einherjer. Suitably, the consequence of them falling in battle is far greater than a simple einherjer. If they fall during a stage, they are gone for the rest of the stage, and even worse, they’ll need time off to recover before you can use them again. Some missions require certain allies, and if that particular one is injured, you’ll have to wait out the timer, unless you want to spend some Uru. And by Uru, Gameloft means money.

Thor: The Dark World has a whopping three currencies, and they all feel premium to a certain degree. Runes are the most common currency, earned when you clear stages, though only in any reasonable amount when you clear a stage goal for the first time. Runes are used to level up Thor’s allies and einherjer, and to buy and level up new costumes. It takes a lot of runes to keep levels and equipment where they need to be, and you’re going to run into a wall almost immediately. You can grind stages to stock up on them, but when you’re trying to save up 50,000 runes for the first costume unlock and you’re only earning 1,000 for re-running a stage, well, that kind of sucks. A reminder: this is the most common currency.

The second currency is ISO-008, which is kind of the go-to premium currency for Marvel FTP games. Well, it’s been demoted here. ISO-008 is used to level up Thor’s abilities and stats, and to unlock new powers. You’ll earn it the first time you finish stage goals, and only then. This currency oddly didn’t feel as scarce as the runes, simply because there isn’t as much that you need to spend it on. Of course, unlike runes, it’s a finite resource, so if you run out and you have no other goals to clear, you’re kind of out of luck. 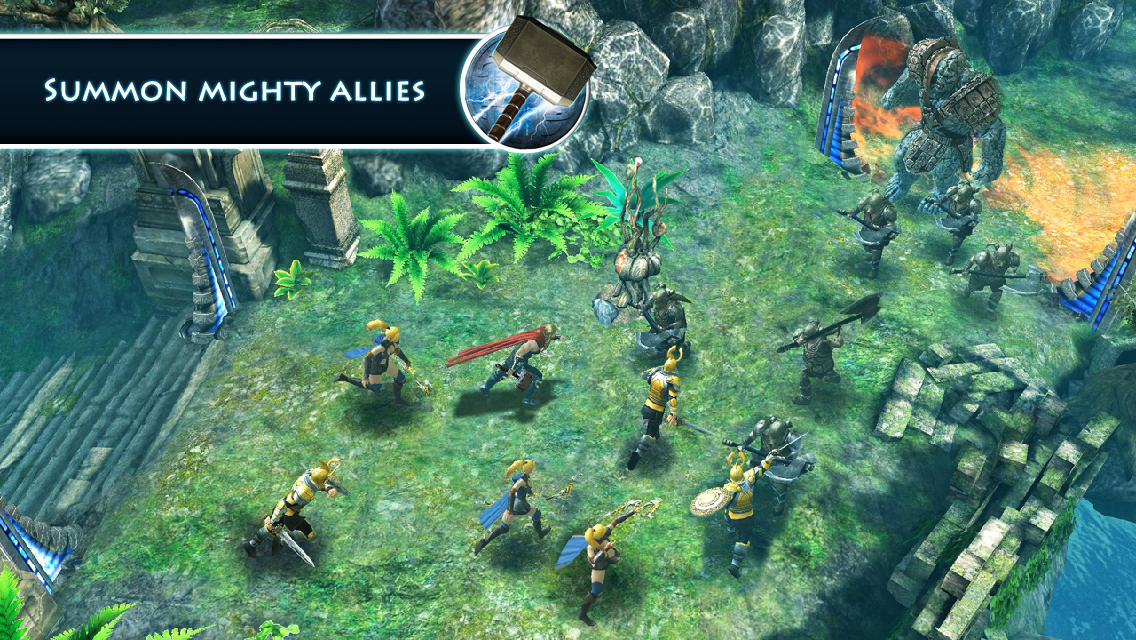 Finally, there’s Uru, which is the game’s real premium currency, and the only one you can directly purchase. Uru is used for all the usual stuff premium currency is used for. You can kill timers with it, continue mid-stage, unlock things early, and exchange it for the other two currencies. It’s also the only way to get new hammers. Some of the stage goals are connected to using certain hammers, which is extremely dirty pool, since the game generously gives you not a single Uru to start with and only rewards it to you in insultingly minimal quantities for clearing achievements.

To be fair, you can progress in the game without clearing every stage goal. There are points where you need to have enough stars, earned by clearing stage goals, to proceed, but the bar is low enough to miss some goals and still pass. Missing stage goals means missing out on runes, though, and without enough runes to keep your levels up, you’ll eventually hit a wall and have to go back and grind. What makes the grinding worse is that the stages themselves aren’t really interesting enough to merit replays. You’re basically doing the same thing in every level, using very similar tactics, sometimes on the exact same layout. It’s nice that the game has four different backdrops for the action, but when just doing each stage once feels repetitive after a short period of time, pushing the player to grind is not a good way to curry favor.

The only nice thing I can say about the monetization model of this game is that there is no stamina meter for Thor. Your allies take real time to recover, but once you’ve recruited a few, that’s not a big issue except for stages where you need a particular one. Unfortunately, at the moment, the timers are a bit bugged, so if you check on how much time an ally has left for recovery, it’ll often reset his or her timer. I guess it’s true about a watched pot never boiling. Thor can keep going all day long if you want him to, which is good because to keep your equipment and levels up to date, you’ll have to. You can’t even fall back on chugging potions to get through obstacles above your level grade, because while you’ll occasionally earn them from beating goals, if you run out, you’ll need to spend, of course, a stupid amount of Uru to get more.

I should also mention that you can’t really finish the game yet at this time. The last world on the world selection screen offers a “coming soon" message if you try to choose it, something I’m seeing pop up in more and more games these days. If you’re not going to release a finished game, at least throw a half-baked faux-ending in there to give some temporary closure to the story, guys. It’s just another strike on a game that doesn’t need any more of them.

With all that said, there’s a lot of great fan service in here for Thor fans. Fighting alongside Thor’s Asgardian allies is one of the things this game gets right that others have failed to, lots of Thor’s foes are here, well-known or otherwise, and the lore is all pretty well done. The unlockable costumes are great, and you can even get Beta Ray Bill. I mean, you probably won’t, because you have to finish in the top 500 in the arena tournament, but hey, Beta Ray Bill!

Unfortunately, in the final tally, Thor‘s a pretty mediocre game on its own merits, even without taking the crushing monetization aspects into account. It’s repetitive, it’s missing its final world, and it’s buggy. Add the insane amounts of premium currency or grinding required to have a decent chance of seeing the game through, and you’ve got a recipe for disaster. I’m not going to say I was entirely happy with the model in play in Gameloft’s Iron Man 3 (Free) from earlier this year, but Thor: The Dark World is even more of a grind, with less enjoyable base gameplay. Even Marvel’s game is better than this.