Licensed games are often hit or miss. In the case of the popular Cartoon Network shows Regular Show and Adventure Time, it’s really up in the air as to whether or not the game will be a bust. But thankfully, the newest Regular Show title Ghost Toasters – Regular Show ($2.99) takes more than a few pages from the indie darling Super Crate Box, and ends up delivering a few unique twists on the formula in the process.

Similar to Crate Box, Toasters is an action platform game that takes place in pre-made arenas. But instead of fighting off evil monsters you’ll be busting ghosts, and instead of grabbing crates to switch weapons on the fly, you’ll touch portals to switch characters (all of whom have a different arsenal at their disposal). Every single green portal will change your character, so expect to switch up your tactics every few seconds or so. It’s the same basic formula as SCB, but changing into various Regular Show characters is a blast, and definitely more enjoyable than using the same character throughout the entire game. 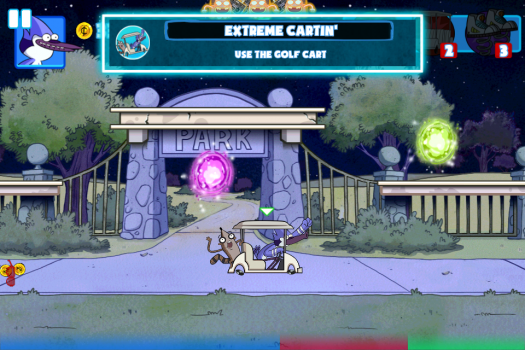 Said characters are also vastly different in terms of their playstyles, like Pops, who sports a flying chair and a confetti blaster, or Muscle Man, who swings his shirt above his head (WOOOOO!) and snaps people with it. The formula also branches off with the addition of purple portals, which allows you to fight with extra characters on the screen at the same time. Each portal adds another body to the confrontation, which adds an extra dimension to the proceedings, as well as a safety net for less hardcore players.

The action is fast, enjoyable, and given the strong enemy variety, it’s almost never dull. Unlike Super Crate Box, Ghost Toasters features a host of different levels, each with a new enemy layout, and a three star rating to acquire. While endless type games are definitely enjoyable in their own right, sometimes it’s great to have a goal to work towards, so I appreciate the change-up here. There is an IAP system, but it’s highly unnecessary and mostly consists of extras like power-ups, and early unlocks. 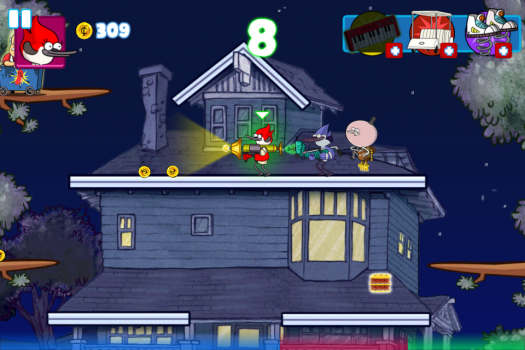 The only major issue I have with Ghoast Toasters is the control scheme. Instead of providing multiple control pad options, the game employs a “slide" mechanic that isn’t nearly as accurate as it wants to be. Time and time again I died because my character either didn’t move the direction I wanted to, or they didn’t move at all. The jump and shoot buttons work like a charm, but without the option to change the movement mechanics, I definitely had to take a few breaks in frustration.

When you’re not fighting the controls, Ghost Toasters is an incredibly fun take on the Super Crate Box formula, with tons of content packed in to boot. I had countless sessions where I just had to get “one more character," and top my latest high score in the process. With a decent amount of enemy variety, solid character designs, and a likeable art style, Ghost Toasters will no doubt eat up more than a few of your afternoons. In other words, it’s definitely better than setting up the chairs.