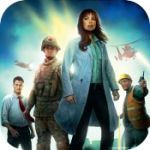 Many of us dream of saving the world, but few really get that opportunity. Pandemic: The Board Game ($4.99) is a cooperative board game that tasks you with stopping four deadly diseases before they consume the world. It has already been a blockbuster on tabletops, attracting the likes of Wil Wheaton, and now it’s taking the App Store by storm. This first time effort from developer F2Z has a lot riding on it. Let’s see if it lives up to expectations.

In Pandemic you or a group of friends control a team of CDC officers as they work to stop the spread of four diseases. Each officer has a specific role and special ability that you will call upon as you travel the world. The game takes place across a map of the world depicting several cities. Cubes represent infections in these cities, and if there are ever three or more cubes in a city and another infection happens it will spread to the neighboring cities (called an outbreak), perhaps causing a chain reaction; don’t let this happen. 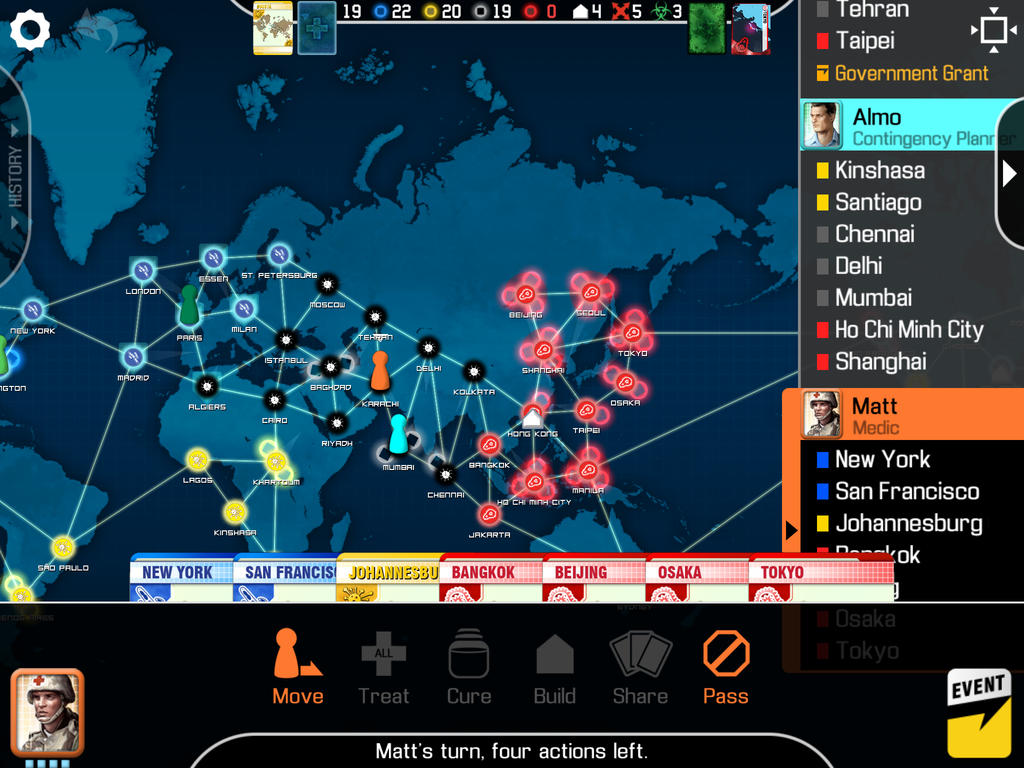 Each officer takes four actions a turn, which they can use to move around the board, treat a disease in a city (remove a cube), give a card to another player, cure a disease, and more. They then draw two cards, which represent cities in the game and also have a color matching one of the four diseases. It takes five of the same color disease card to create a cure and the only way to win is to cure all four diseases.

Sadly, there are many more ways to lose. Each turn new cities receive infections that can cause outbreaks; get eight outbreaks and you lose. You can also lose if too much of one disease is on the board, you run out of player cards to draw, and more. It sound desperate and tense, and it is. You must plan ahead and use all your officers effectively in order to succeed. If you like brain burning puzzle games, you will be right at home here.

Pandemic on iPad is a solo or pass and play experience. Rather than some cheesy AI to control the other players, you can tackle the puzzle alone as two to four agents or pass the iPad around among friends. There are options for you to select your different officer roles or randomize them as well as adjust the difficulty of the game. This is an outstanding solo experience that, while a different feeling than cooperating with others around a table, provides fulfilling and tense gameplay. Online play would have been challenging for this game, but I wish they had tried to innovate and tackle it, however, the game is still great with the current feature set.

Pandemic knocks it out of the park in presentation. I generally review tabletop strategy games on iOS, so I rarely get to use the word cinematic, but here it works. I recommend playing with headphones as the sound effects, soundtrack, and well-placed, tasteful animations combine to create an engrossing and tense experience. As the situation of the Earth goes from bad to worse and your team is hanging on by a thread you feel the game graphics reflecting your dread. It is a surprising accomplishment.

Whether you are an iOS board game fan or a puzzle game fanatic, Pandemic: The Board Game deserves a look. It is a tight, focused package that demonstrates some of the best that tabletop and iOS design can offer.