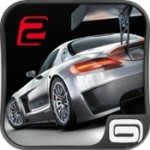 Gameloft announced a sequel to their popular sim-racer GT Racing last month, and this week I was able to stop by their San Francisco offices to take a near-final version for a test drive (terrible pun, but I couldn’t help myself). The response to Gameloft’s over-the-top arcade racer Asphalt 8 has been great so far, and based on my experience with GT Racing 2: The Real Car Experience it looks like their on their way to a similar success in the sim-racing genre.

There are loads of real models of cars from real car manufacturers in GT Racing 2, and since Gameloft is partnering with Mercedes-Benz for this release there are even some of the more rare cars from their rich history like the gullwing-doored 300SL. There is only one actual real-life race course in the game, the famous Laguna Seca raceway in California, but there are a good number of courses designed by Gameloft that do reside in real-life locations.

Visually, the car models and the environments are extremely detailed, and you’ll be able to race in the various locations during the daytime, during twilight, during nighttime and even during the rain. Here’s a lengthy direct-capture video of GT Racing 2 as we run through a few different races and show off a selection of the cars and courses on offer.

Seeing as GT Racing 2 is a free-to-play game, one concern is how stifling the freemium elements might be. Thankfully, this appears to be handled rather well by Gameloft. There is a fairly straightforward and simple upgrade system for your vehicles, and upgrading different aspects of your car will come with typical wait timers. However, this will never impede your ability to race, and although there is damage modeling when you bang up your car during a race there is no sort of repair mechanic involved in the game at all. As long as timers are relegated to the upgrading system only, I think I can hang.

One other really neat aspect of GT Racing 2 is a selection of cars that you can only obtain by completing certain challenges. You can’t buy these cars otherwise, be it through IAP or in-game currencies of any sort, you’ll have to actually buckle down and complete the challenges required through playing. This selection of cars contains a broad selection of unique vehicles including some very cool American muscle cars which you can catch a glimpse of in the video above.

GT Racing 2 has just soft-launched in the Canadian App Store as of today, and full worldwide release is slated before the end of the month if everything goes smoothly. It’s definitely not a “hardcore" simulation racer like Gran Turismo or the like, but it does offer a more realistic brand of racing that looks and plays really well. If you have access to a Canadian App Store account you can give it a spin for yourself with the link below, and check out more early impressions from gamers in our forums, otherwise be on the lookout for GT Racing 2 to hit worldwide in the near future.