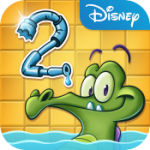 I’m a pretty huge Where’s My Water? fan. I’ve beaten every course on every iteration of the game, and it’s my perfect go-to for when I have a few extra minutes to kill. Those were paid apps with meaty expansions though, and now Disney has seen fit to offer up a freemium-filled sequel. But while the IAP system, an insistence of Facebook Connect, and the freemium makeover in Where’s My Water? 2 (Free) feel highly forced, it’s still mostly the same old Swampy we know and love. Mostly.

Don’t get too excited, as you’re still going to be digging through dirt to get water to a bathtub, so not much has changed fundamentally. As always, there are three ducks in each level to collect, and this time, you pretty much need to get as many as possible to unlock level gates. Yep, unlike past iterations where you could skip levels at your leisure, you have to actually ace some levels to progress to a new set. For veterans like me it’s not really an issue, but I can see more casual players getting pretty frustrated — because after all, the beauty of the original games is the fact that you could play them at your own pace. 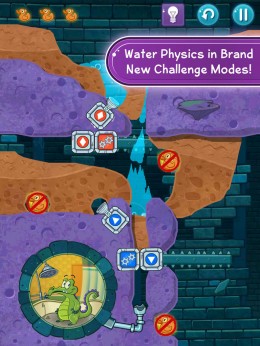 Gameplay-wise the 100 levels on offer have a bit more variety this time around instead of your standard “water to tub" puzzles. There are now levels where you have to avoid collecting any ducks, in addition to upside-down stages, and special challenges like leading a stream of water through a constantly scrolling screen (multi-touch, a feature that’s always been in the series, really shines here). The Mystery Duck levels from the original’s add-on campaign also return, and are as enjoyable as ever. As a whole it’s not nearly as strong as what I’d consider to be the best game in the series (that honor goes to Where’s My Mickey?), but it’s still a ton of fun nonetheless.

But not all is well in Swampy-Land, as I ran into some annoyances along the way. For one, Facebook Connect is constantly in your face after every level, and it’s even a lingering presence on the map screen. Sadly, Where’s My Water? 2 constantly pesters you to reach out to your friends to refill your energy and even unlock more content late-game. If you absolutely hate this “feature," odds are you’ll uninstall the game before you put up with it more than once — or just outright refuse to install it.

The other potential issue is energy. Yes, an energy timer is in Where’s My Water? 2. Even if you can pretty much play at your leisure early on, it’s puzzling to think why, after multiple successful fully paid iterations, that Disney would inject a freemium scheme into the franchise.

At the time of this writing, there is no way to buy the game outright. Instead, the game offers an “energy increase" IAP for $16.99 (it’s not even an infinite unlock!), among other power-up purchases. You absolutely don’t need them as you can beat the game without them, but it’s borderline offensively priced, and I’m sure some people will be suckered into it.

Where’s My Water? 2 definitely needs a few improvements if it wants to reach the quality of its predecessors, most notably a strong pull-back on its aggressive IAPs. But despite the attempt at walling off its own players, there are a ton of intriguing concepts and mini-games that expand upon the Where’s My Water? formula that fans will enjoy.